HBO schedule has been updated to confirm titles and casting info | Watchers on the Wall | A Game of Thrones Community for Breaking News, Casting, and Commentary

This week has been very busy with updates surrounding episode titles, and the crowning confirmation is that the HBO schedule has been updated with the reported titles of the first three episodes.

Episode S5E1: The Wars to Come

Episode S5E2: The House of Black and White

Additionally, each season 5 episode lists the regular and significant recurring cast members as usual. This is notable in this instance for one particular reason which I’ll tuck below a cut for spoiler reasons. 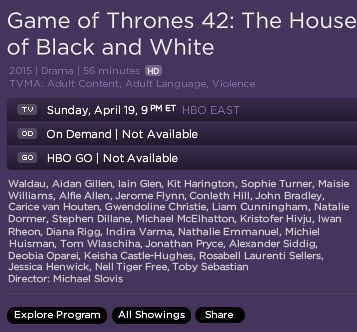 The cast listing confirms the return of Tom Wlaschiha. I first uncovered Wlaschiha’s return last summer on a news listing on his German agency website that was later deleted. However the actor was not spotted on set and so his return has remained officially unconfirmed until now. It’s commonly speculated that his character Jaqen H’ghar may surface in Braavos, the home of the Faceless Men, but there are other possibilities, as his character travels to other places in the books. The most popular guess, though, is that he may take on the role of the Kindly Man from the books.

The cast listing is identical for each week on the HBO schedule, so we cannot draw any conclusions from an actor’s name appearing on the episode 1 list. (Or episode 2- which is what I happened to screencap.)

I was confident Wlaschiha was returning, based on the agency news, but having it officially confirmed is fantastic!