HBO confirms April premiere date for Game of Thrones! | Watchers on the Wall | A Game of Thrones Community for Breaking News, Casting, and Commentary 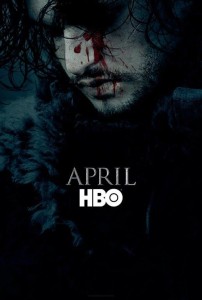 HBO has now officially confirmed the premiere date for season six of Game of Thrones. As expected, the new season will arrive on Sunday, April 24th, in its usual 9:00PM slot.

HBO also confirmed today that the new seasons of Silicon Valley and Veep will debut on April 24, airing after Game of Thrones.

This has been the predicted premiere date for season six for a few months now, since HBO confirmed that their new series Vinyl would run into mid-April. The Jon Snow teaser poster unveiled in November with the word “April” reinforced the predicted date.

Time to get the countdown clock up and running!