Gwendoline Christie and four castmates head to Iceland for Season 8 filming | Watchers on the Wall | A Game of Thrones Community for Breaking News, Casting, and Commentary 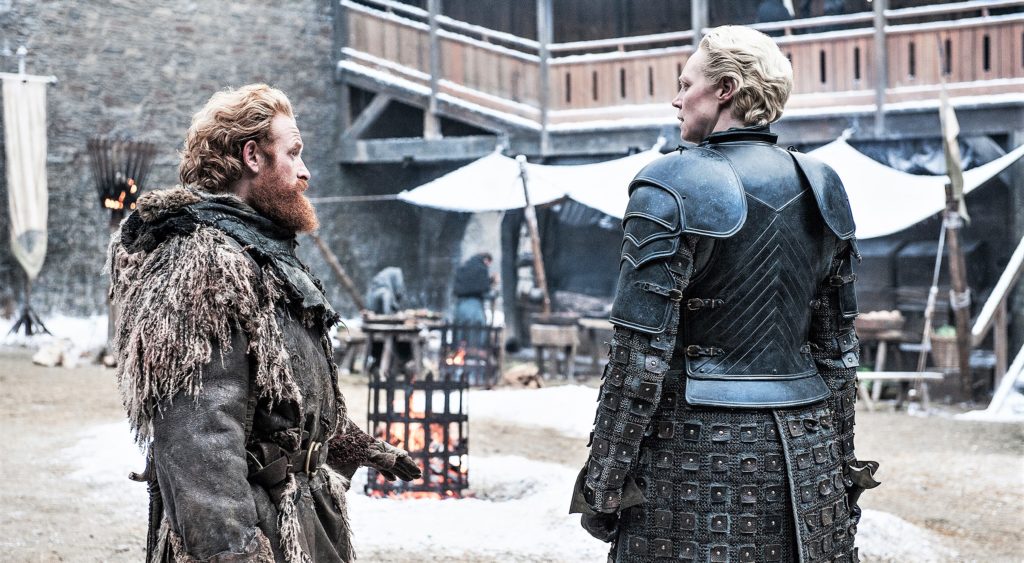 The recent arrival in Iceland of two main cast members may mean their characters will be marching to the frozen lands beyond the Wall — unless, of course, they will just be where we expect them, in the lands south of the Wall, but now looking much frostier! With winter settled in Westeros, it’s a bit difficult to predict whether snowy Iceland will keep being used only for the Frostfangs or if these scenes will be set in the North. Now, thanks to certain stars traveling to Iceland, we may know the answer to that question!

Following the lead of Emilia Clarke and Kit Harington, Kristofer Hivju, Joe Dempsie, Iain Glen, Gwendoline Christie and John Bradley were seen —and photographed— in their journey to Iceland earlier today, presumably enjoying a nice lunch at the airport:

(Original photo source on Tumblr)
The particular combination of cast members is what’s most telling about this picture. Since we last saw Tormund and Gendry at the Wall, we may well expect to see them around Eastwatch, part of which was indeed filmed in Iceland last year. Likewise, it’s not difficult to imagine why proven warriors such as Ser Jorah and Lady Brienne may be alongside them; perhaps to rescue them, or mount some defense between the Wall and Winterfell. All of that sounds quite plausible to me. But what about Sam?

Samwell Tarly may be the Slayer, but still, there are few circumstances in which it’s a good idea to send one of your few erudites to anywhere where the likes of Tormund Giantsbane, Brienne of Fucking Tarth, Gendry the Bull and Jorah the Bear are needed.

Sam’s presence is what leads me to believe that, with winter finally here and the White Walkers past the wall, we’ll see at least some scenes in the North beginning to look a lot more like Iceland and not so much like Northern Ireland. Maybe all of these scenes involving Clarke, Harington, Christie, Hivju, Dempsie, Glen and Bradley will take place south of the Wall; or most likely, some of them will take place around the Wall, while others, at least with Sam, will be set in the comparatively safer lands of the North.