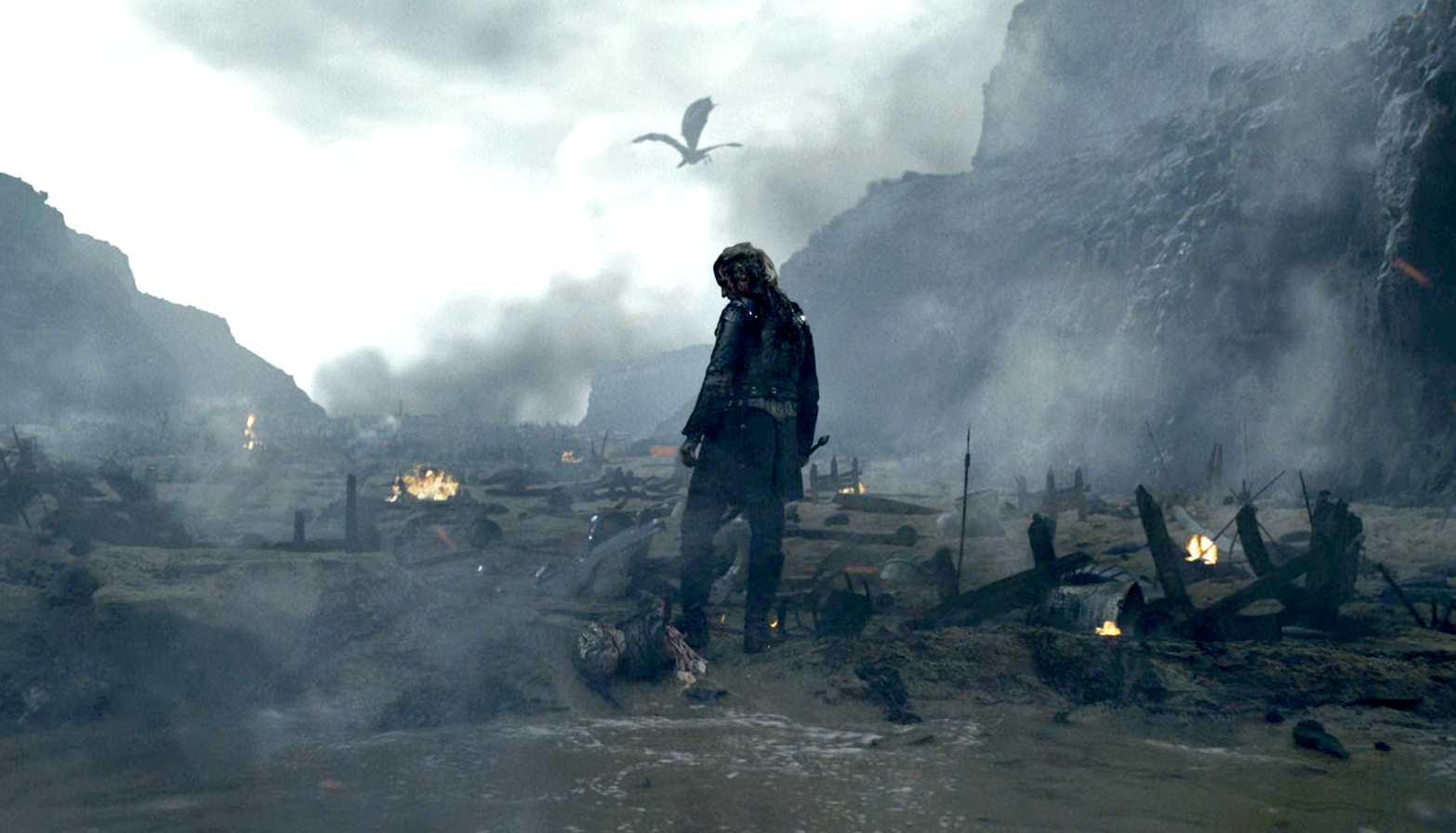 This week in Dialogues, Luka and I debate the merits of action sequences following the “rule of cool,” discuss Rhaenyra’s 90’s Disney princess status and the symbolic significance of that white hart, and more. *Fair warning* We avoid Fire and Blood spoilers but do address future events hinted at in the trailers.

Petra: I suspect we’ll have more to debate about this episode because, to be frank, this was my least favorite episode so far.

Luka: Ah, that is interesting. I’m not sure where I’d rank it—that’s not something I often do,—but I can say I liked it quite a bit. I had a few minor issues with it, but I’d love you to tell me what it is that didn’t work so well this week for you.

Petra: To be clear, I didn’t dislike this episode, but the Stepstones subplot left me wanting. Daemon’s victory felt anticlimactic. The off-screen showdown with the Crabfeeder and plot armor that his great, great, great, grandson Jon Snow clearly inherited just left me cold, you know?

Luka: I suspected that’d be your issue with it.

Petra: You know me well.

Luka: It’s true that it doesn’t feel like we had a complete view of the War for the Stepstones. I didn’t mind it, since in Fire & Blood it’s just an aside, but it did feel a bit chopped up. As for the ending, it did feel climactic to me, but not so much because of the showdown with Crabfeeder but because of what this whole thing means for Daemon. I just love how he reacted to his brother’s pledge of aid, which was almost absurdly nice. Daemon went there to prove himself and he just can’t take the Crown’s help now; he’d rather die. Which is why the “plot armor” thing doesn’t bother me. He survives because he just happens to survive, but it’s not like he thought he had a brilliant plan to get out of there alive, in my view.

Petra: I love Daemon’s reaction to Viserys’ letter too. It tells you a lot about his character. I like the idea that he’d rather die knowing he won without his brother’s help than benefit from aid and survive. My issue is he puts himself in a situation in which he should die but emerges unscathed. The arrows that hit him don’t particularly slow him down. He still bests Crabfeeder in single combat. What I would have preferred (and what I thought would happen when I saw him in that rowboat) is him seeking the Crabfeeder out alone in the caves, and actually struggling to win against him. He’d have to get close enough to kill Drahar but not so close that he’d contract greyscale. He wouldn’t have Caraxes with him. He’d realize how vulnerable he is, and all the Targaryens are, without a dragon. If Daemon’s going on a suicide mission then he needs to be put at a disadvantage at some point.

Luka: If that’d been my expectation, I’d be disappointed too. At the end of the day, I guess I’m just more fond of the “rule of cool” than you are. Like Game of Thrones, it seems this show goes a little too far with it sometimes, at least for some folks. From what I’ve seen online, the archers missing Daemon for most of the suicide run strain the credulity of many watchers, but the archers were far away; if the VFX arrows weren’t missing Daemon by only a hair, in order to amplify the sense of danger and Daemon’s coolness, I think there’d be less of an issue with it. As it is, it does seem like he’s dodging death at every second. The Battle of the Bastards had a bit of this with Jon. I just happen to enjoy it, even though I know it’s not realistic, or at least likely. I get it’s not for everyone. 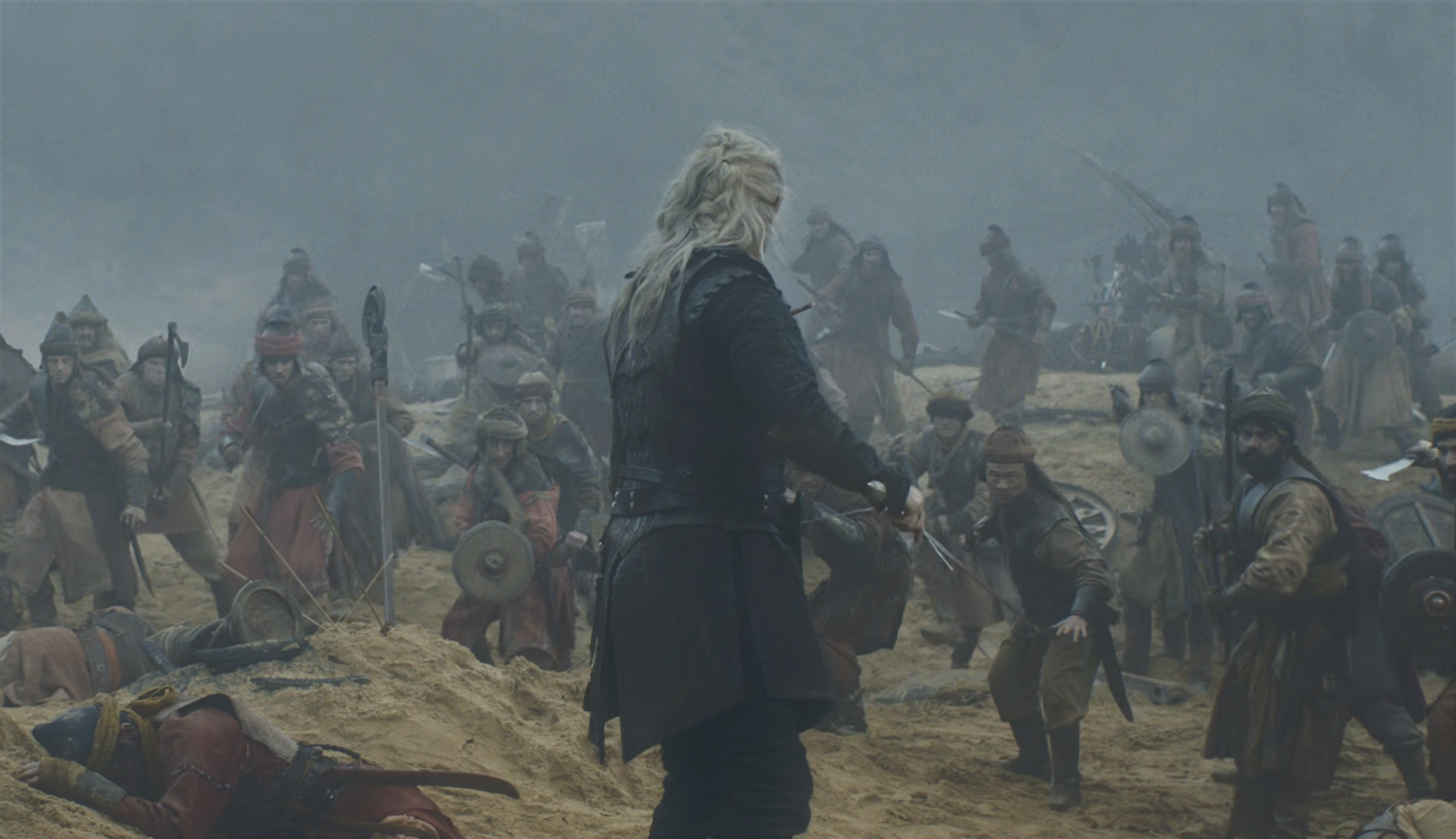 Petra: A few years ago, I learned the word “verisimilitude” from Youtuber Patrick Willems. In the context of media criticism, it refers to the internal logic or tonal consistency of a movie or TV show. Daemon’s cool action hero antics break the verisimilitude of a show in which Viserys cuts his pinky finger and then gets a horrible infection, you know?

Luka: It does feel like a bit of a different show, yes.

Petra: You appreciate the rule of cool and I’ve got a penchant for uncoolness. Which is probably why I still like Viserys.

Luka: Ah, poor Viserys. Poor drunk, fingerless, Viserys, plagued by endless fucking politicking. This was my favorite of Paddy Considine’s performances as the king. He gets to show some more range. Amidst all the dourness, he still gets to have a few chuckles, and gets a few out of us too.

Petra: Phenomenal drunk acting, and I appreciate that he acknowledges his responsibility for Aemma’s death. He’s usually such a placater and people-pleaser, so it was nice to see him double down and vehemently defend Rhaenyra as heir.

Luka: Especially against that slimeball Lord Jason. What did you think of the new characters we met at the royal hunt? We were only briefly introduced to Harwin and Larys, the Strong boys, but we also got to see more of a house that’s familiar to Game of Thrones watchers: the Lannisters. I like how Jefferson Hall couldn’t play the twins any more differently.

Petra: I liked Jason Lannister’s surfer bro cadence. I don’t know if there’s a word for the way he elongated his vowels.

Luka: Reminded me a bit of the way Dinklage spoke as Tyrion, although English is not my native language so some of the subtleties escape me still. As for his surfer bro vibe, in the behind the scenes material director Greg Yaitanes describes his mannerisms as Gaston-like, which is perfect, honestly. 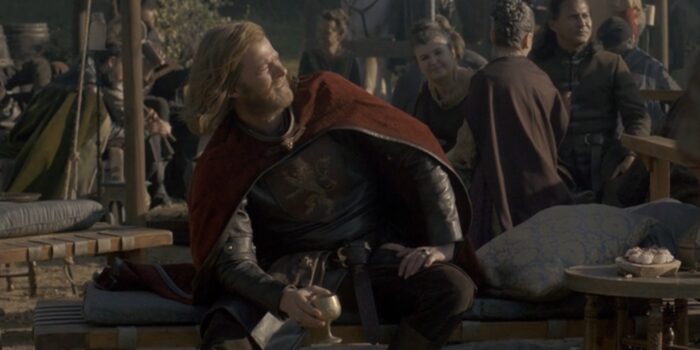 Petra: I got such strong 90’s Disney Princess vibes from Rhaenyra this episode, especially when she Jasmines away into the woods and emotionally connects with a handsome commoner. In fairness, anytime a princess rebuffs marriage proposals it reminds me of 90’s Disney.

Luka: Oh no, you’re not the only one. If this was a musical, Rhaenyra would’ve totally had her “I want” song while escaping through the woods and frolicking with the white hart. As this is the Game of Thrones universe, things don’t go quite that way, but close enough!

Petra: A woodland creature did give her his royal blessing. That’s a first for this universe, I believe.

Luka: It felt much more like A Song of Ice and Fire. Game of Thrones played down that kind of abstract or intangible magic. Sure, it had dragons and White Walkers and the like; magical creatures. But not so many prophecies, portents, that kind of thing. What did you make of it?

Petra: It did get an emotional reaction out of me. After watching Viserys butcher the brown stag, to see the real white hart appear and give Rhaenyra the validation that she so desperately needed felt good. For a second, I thought I was watching Shadow and Bone, but I did like the symbolism.

Luka: The obvious read is that the gods are blessing Rhaenyra with their royal symbol. There’s a darker interpretation I thought of. The purported goal of the hunt, for Otto especially, was to hunt the White Hart to symbolize Aegon becoming the new heir. Rhaenyra didn’t kill the hart, though. She let it live. The obvious read, and the one I believe in, is positive, but another one is that she will have her crown within her reach but won’t take it. I don’t believe that’s what we’re meant to think, but it may be another way to look at it.

Petra: Ooh, interesting. I absolutely had not thought of that. I thought you were going to say that Rhaenyra is the white hart, that in order for Aegon to be king Rhaenyra has to be hunted and disposed of first.

Luka: That is essentially what Otto wants the king to do, symbolically, so that’s a valid view as well. Game of Thrones didn’t venture into these “signs and portents” so much, so it’s refreshing to be able to discuss these avenues that are more open to interpretation.

Petra: I think the most we got in Game of Thrones was the direwolf with the stag antlers sticking out of it and the comet, neither of which felt as blatantly divine as the white hart. Like, the white hart really did seem to be looking at Rhaenyra with anthropomorphized understanding.

Luka: My cynical take is that VFX artists sometimes go overboard when animating animals, making them move too much and giving them too many facial expressions. I wonder what the scene would have felt like with a real albino stag instead, as we’d probably have gotten in the Game of Thrones days; it’d have been more realistic, in a good way, but also more down-to-earth, in a bad way, or at least less effective for what this scene was trying to achieve. The end result is one of the most magical, apparently divinely-planned moments of the series. And a show original, too. I loved it.

Petra: In true GRRM fashion, of course, the true power of the white hart omen comes from Rhaenyra’s belief in it. She takes this as proof that the gods want her on the Iron Throne, as well as her father.

Luka: Viserys swears on Aemma’s memory that he won’t flip-flop again with the succession, so he doesn’t seem to need any more reassurance, but if he does, I hope Rhaenyra tells him that she saw the white hart. That’d be like prophecy cat-nip for Viserys, a dragon dreamer.

Petra: Now that I think about it, Rhaenyra was never in doubt of the gods’ support of her. She deals in strictly material factors, so the white hart didn’t matter as much to her as Viserys’ reaffirmation of support in the Small Council room. It would have been interesting if Alicent, the more religious character, had seen the white hart instead of Rhaenyra. In this episode she still firmly supports her friend’s claim, but receiving the gods’ white hart blessing might have planted the first seeds of doubt in her mind. Speaking of which, do you have any idea what will cause the tide to turn against Rhaenyra?

Luka: Based on Fire & Blood, I have a pretty good idea, despite the changes to the timeline and Alicent’s relationship to Rhaenyra. I’m pretty sure the tide’s about to turn, starting next episode.

Petra: Based on the preview, I wonder if good old fashioned slut-shaming is what turns Rhaenyra’s allies against her. I’m just pleasantly surprised that Alicent’s loyalties haven’t been completely recalibrated by becoming a mother, so I’m wondering what it is that leads her to turn against Rhaenyra.

Luka: The point of no return for the two of them may be a few episodes away yet, after the big time jump. If it’s earlier, I agree I’m not sure what it’ll be exactly. We’ll have to wait and see! Speaking of the preview, did you notice Rhaenyra at what looks like Storm’s End? You can see Lord Baratheon at her side, and a relief of the stag sigil etched on the wall behind them. It seems next episode the princess may be touring the realm getting courted by all the great houses!

Petra: I’d love to see more of the realm, and maybe meet characters who will play a larger role later on. Maris Baratheon, perhaps even Cregan Stark?

Luka: I think we’d have heard of Lord Cregan getting cast, but yes, I’m also excited to get to know some of these important characters before the Dance begins in earnest.