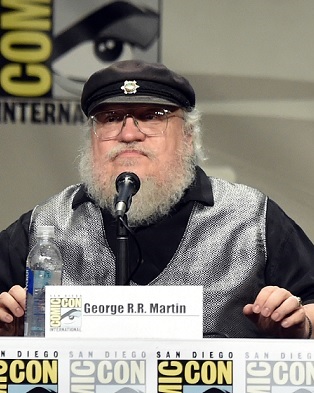 George R.R. Martin chatted with The Daily Beast recently, post-San Diego Comic Con, and the conversation centered on the controversial and much-analyzed sept scene from “Breaker of Chains.”

Since the episode aired in April, the scene between Jaime and Cersei in the sept had been often debated, with some calling it a complicated but ultimately consensual sex scene, and some viewing it as rape. The episode director Alex Graves, writers David Benioff and D.B. Weiss, and the actors themselves have all weighed in on the subject, conveying their intentions for the scene. But the debates continue.

In speaking with The Daily Beast this week, Martin agrees the scene is “written somewhat different in the TV series than in the books” but having experience writing for television, he does understand the need to adapt, with the show being unable to go into Jaime’s internal monologue. He explains:

I can go inside the head and show exactly what he’s thinking and if you just look at the dialogue, if they’d included all that dialogue it would have been a considerably longer scene. Virtually any scene, there’s always economy. You know the scene would be five minutes long and we have to get another scene that’s one minute long or half a minute long. In that case, I do wish they’d included my dialogue from the books because I think that would have been seen in a different context.

Martin also acknowledges that by the show altering the timeline to have Jaime arriving in King’s Landing before Joffrey’s death, that it affected the overall depiction of the scene.

The only person she ever truly loved besides her children may be lost to her forever and suddenly there he is before her—but shockingly maimed and transformed. There is a mutual passion for each other. And it’s like if you get a cable that your husband has been killed in war, and then suddenly there he is—he’s not killed in war. That triggers something. When they changed the time frame, they changed the context of that scene.

For the full article and to read Martin’s thoughts on where he sees Cersei and Jaime’s relationship headed, visit The Daily Beast.

Sue the Fury says: It’s good to get George’s input. You can’t deny he knows the characters inside out, since well, he created them. It’s an interesting situation. Once you create something, you can’t control how it’s interpreted.