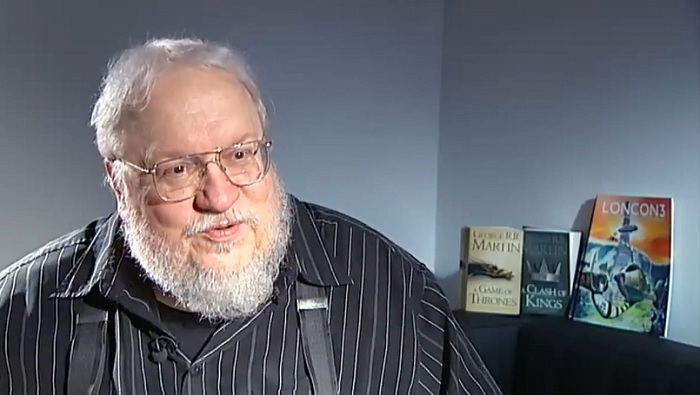 George R.R. Martin‘s appearance this week at the Edinburgh International Book Festival set off a great deal of discussion on the subject of gay characters in his A Song of Ice and Fire novels, and the possibility of love scenes.

Today, the author appeared on a Channel 4 news program in the UK, elaborating on his comments at the festival, while reiterating the limitations of his chosen point-of-view structure.

I do have gay characters. That was something that was very important to me to do when I began this series back in 1991 because at that time, there were very few gay characters in epic fantasy and I wanted to reflect that segment of the population. You know, gay people enjoy epic fantasy too and gay people are an important part of our world and any imaginary fantasy worlds. So I include some pretty important, and I think, heroic gay characters but they weren’t viewpoint characters and since I use a strict third-person viewpoint structure, the gay sex scenes took place off-stage. But who knows if that’ll be true for the last two books. We’ll have to see where the story leads me.

Martin also talked about what type of finish fans could expect from the series, down the road. As in the past, he teased “a bittersweet ending.” He explains his intentions with a comparison to his inspiration- Lord of the Rings.

I think there’s going to be a bittersweet ending. I’ve always taken my influence from J.R.R. Tolkien and if you’ve read Lord of the Rings, Sauron is defeated and the ring is destroyed in the end but it’s not a happy, happy ending. There’s a real sense of things lost too, and I found that very powerful, and very moving. So I think my ending will also have a bittersweet tone, I hope, if I can bring that off the way I want.

Check out the complete interview below for discussion of George’s latest ASOIAF project, The World of Ice and Fire, and more.