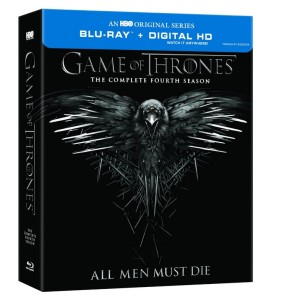 The Blu-ray of the last season is coming out on Tuesday, February 17th, about two months before the Game of Thrones S5 premiere. Same as every year, I’m looking forward to expanding my boxset collection and savour all the extras to tide me over until the airing of new instalments in April. At least one review of the boxset is already available, so you can decide whether you want to get it or not (in case you haven’t preordered it yet).

It goes without saying that the audio and video are of highest quality and receive top grades.

As to the actual content of the season – well, we know everything about that, don’t we. The actual newsworthy bit is that thanks to Brian White from whysoblu? we can examine the precise contents of the digital package, with the extras listed in detail, which is the information of utmost interest to us.

Check it out after the break.

The standard in-episode guide is accompanied by the likewise standard sixteen (if I counted right) new illustrated histories, which are always a treat, covering topics from House Martell to the Iron Bank and everything inbetween. EDIT: I’m listing all of them, by popular request: House Martell, House Baelish, Dragons, Poisons, The Bastards of Westeros, The Iron Bank, Robert’s Rebellion, Sellswords & Hedge Knights, The Wall, The Nations of the North, The Kingsguard – Jaime Lannister, The Kingsguard – Bronn, The Maester’s Chain, The Death of Kings, Valyrian Steel, Justice of the Seven Kingdoms.

Then there are five features:

There will be two deleted scenes included this year, one with Bronn and Shae, and one with Daenerys and Missandei. Three minutes of material in total. A completely new type of extra this year is a blooper reel. The length puts it at two minutes, which means it is very likely the video shown previously at Comic Con. It definitely deserves to be included. I just wish they made one of these each season.

The audio commentary list is reproduced below. Episode three has none, while nine and ten feature two each:

This should be fun, as always! I’m looking forward to B-Cog’s insights, hearing what Pedro has to say as fresh meat (Hi, Pedro! Bye, Pedro!), and Gwen’s laughter, to mention just a few highlights.

Follow the link to the review for photos of the unboxing and the artwork.