Game of Thrones Season 6 Episode 8 "No One" Written Recap Round-Up | Watchers on the Wall | A Game of Thrones Community for Breaking News, Casting, and Commentary 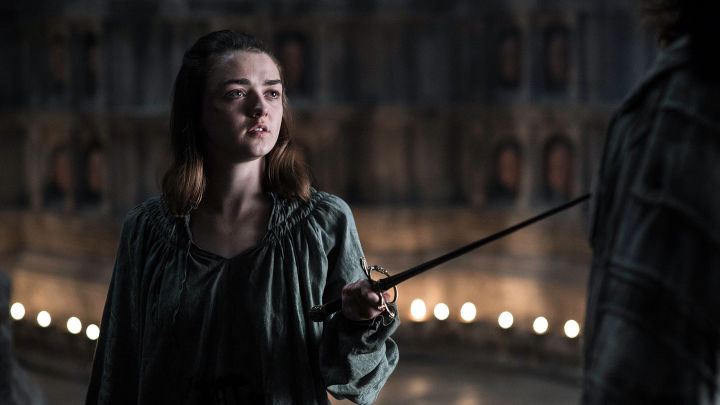 Cersei chose violence, a showdown at Riverrun, and a girl finally became who she was alway meant to be in the thrilling eighth episode of Game of Thrones season 6: “No One.” Let’s see what the critics had to say!

Here on The Wall, Sue (Sullied) revels in the reunited Jaime and Brienne and the chase through Braavos. Oz (Unsullied) discusses Riverrun, the epic attack on Meereen, and The Hound’s revenge.

Myles McNutt, A.V. Club (Sullied) – McNutt struggles with the execution of the “No One” theme in Braavos.

Alyssa Rosenberg, The Washington Post (Sullied) – Rosenberg reviews the ways the episode portrayed what our characters do for love.

Rob Bricken, io9 – Disappointed by Arya’s lack of payoff, Bricken evaluates the unexpected events in “No One.”

Sarah Hughes, The Guardian (Sullied) – Hughes had conflicting thoughts for the episode, saying “parts of No One were up there with my favourites, although it was ultimately let down by some clunky contrivances.”

Neil Miller, Film School Rejects (Sullied) – Miller empathizes with his fellow book readers as two highly anticipated events were snuffed out in “No One.”

David Crow, Den of Geek – Crow rejoices over the end of The House of Black and White storyline (thankful that it’s over) and what’s next for Arya Stark.

Laura Hudson, Wired – Hudson cheers for the “hell yes” moments of this episode including Arya’s escape and The Hound’s revenge.

Alan Sepinwall, Hitfix – Sepinwall laments for what he calls the “least memorable” episode of season 6.

Brandon Norwalk, A.V. Club (Unsullied) – Like his A.V. Club counterpart, Norwalk also struggles with the “point” of Arya’s time in Braavos now that it has come to an end.

Laura Bogart, Salon – Bogart analyzes the theme of identity through Cersei, Jaime, and of course, Arya.

Laura Stone, Hey, Don’t Judge Me (Unsullied) – Stone reflects on Cersei’s new position and Arya’s confrontation with No One.

David Rosenblatt, Squinty Over Analyzes Things (Sullied) – Rosenblatt takes a total analysis approach to “No One” through the Kingslayer himself: Jaime Lannister.

Laura Byrne-Cristiano, Hypable – Bryne-Cristiano focuses on the characters reevaluating themselves and their destinies through Arya and The Hound.

Alicia Lutes, Nerdist – Our newest addition to the round-up, welcome Alicia Lutes! She is beyond enthusiastic for Arya Stark and the conclusion of her journey to No One.

It looks like most critics weren’t pleased with the way Arya’s story in Braavos ended but still enjoyed other parts of “No One.” What are your thoughts? Let us know below!