Game of Thrones searching for soldier extras and more in Spain | Watchers on the Wall | A Game of Thrones Community for Breaking News, Casting, and Commentary 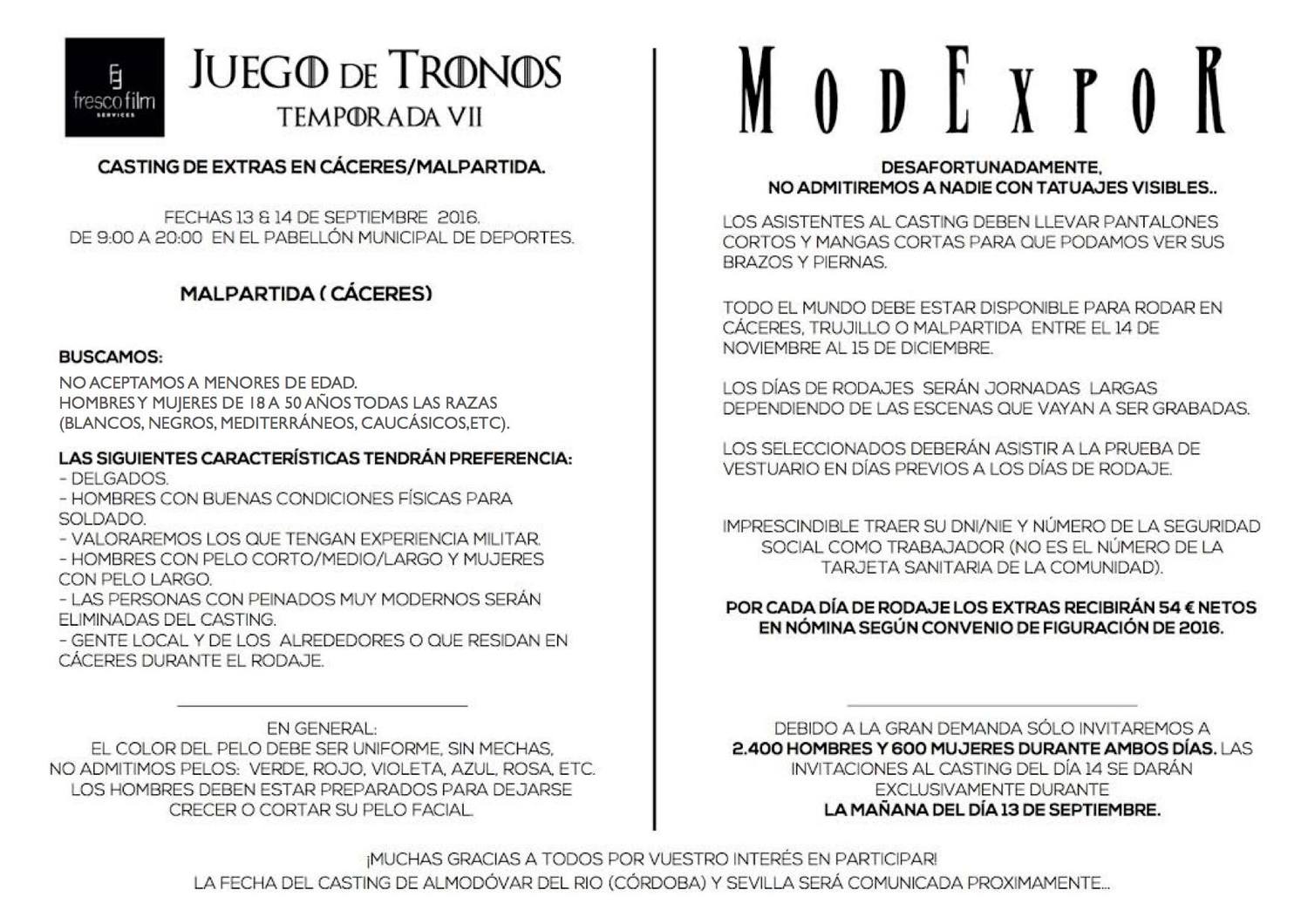 We have new details today concerning the season 7 casting for Game of Thrones extras in Spain. ModExpor International has finally posted on their Facebook the first complete casting call for extras this year, providing details as to what they’re searching for in performers in the Cáceres region. The call also gives us more of an idea of how long Game of Thrones is planning to film in the area: approximately November 14th to December 15th.

The posting also indicates that ModExpor will be sharing info soon about the extras castings in Córdoba (for the Almodóvar del Río location) and in Seville.

For extras in Cáceres province, the casting is based in Malpartida, taking place on September 13th and 14th, from 9:00am to 2:00pm in the municipal sports hall.

According to ModExpor, they’re looking for adults in the 18-50 age range (no minors) and people of all races.

Characteristics they’re particularly looking for and give preference to include:

– Thin people
– Men in good physical conditions- for soldiers. They mentioned that they “will value those with military experience.”
– Men with short/medium/long hair and women with long hair.
– People with very modern hairstyles will be removed from the casting. Hair color has to be uniform, without streaks, and has to be natural hues- they don’t accept colors such as green, blue, pink, etc.
– Men should be prepared to be grow or cut their facial hair, if needed.
– They prefer locals, and generally people who will actually be living in the Cáceres area during filming.
– Extras can have no visible tattoos.

Extras will have to be available for shooting in Cáceres, Trujillo (also found in Cáceres province) or Malpartida from November 14th to December 15th.

Not all who show up will get to be on Game of Thrones. After the thorough screening of applicants, ModExpor will be inviting only 2400 men and 600 women to take part in the second day of casting. Invitations to casting on the 14th will be given only on the morning of September 13th. The number of extras who will make the final cut is unknown.

With the wide range of extras sought in the Cáceres province, it may be tough to narrow things down in speculation. But based on the locations involved, we still believe that the city of Cáceres and its well-preserved Old Town will serve as the base for shooting King’s Landing and other possible city scenes, such as Westeros’ Oldtown.

Trujillo Castle and Malpartida filming in Los Barruecos may have more particular requirements in extras, but they can be extracted from the large general pool of applicants who will be turning up at the call. The call for soldier-like men, ones with military experience, makes the Unsullied a good possibility. There have been rumors of Los Barruecos being part of a battle scene on/near the water, so soldiers would certainly be needed for that.

What are your thoughts, readers?