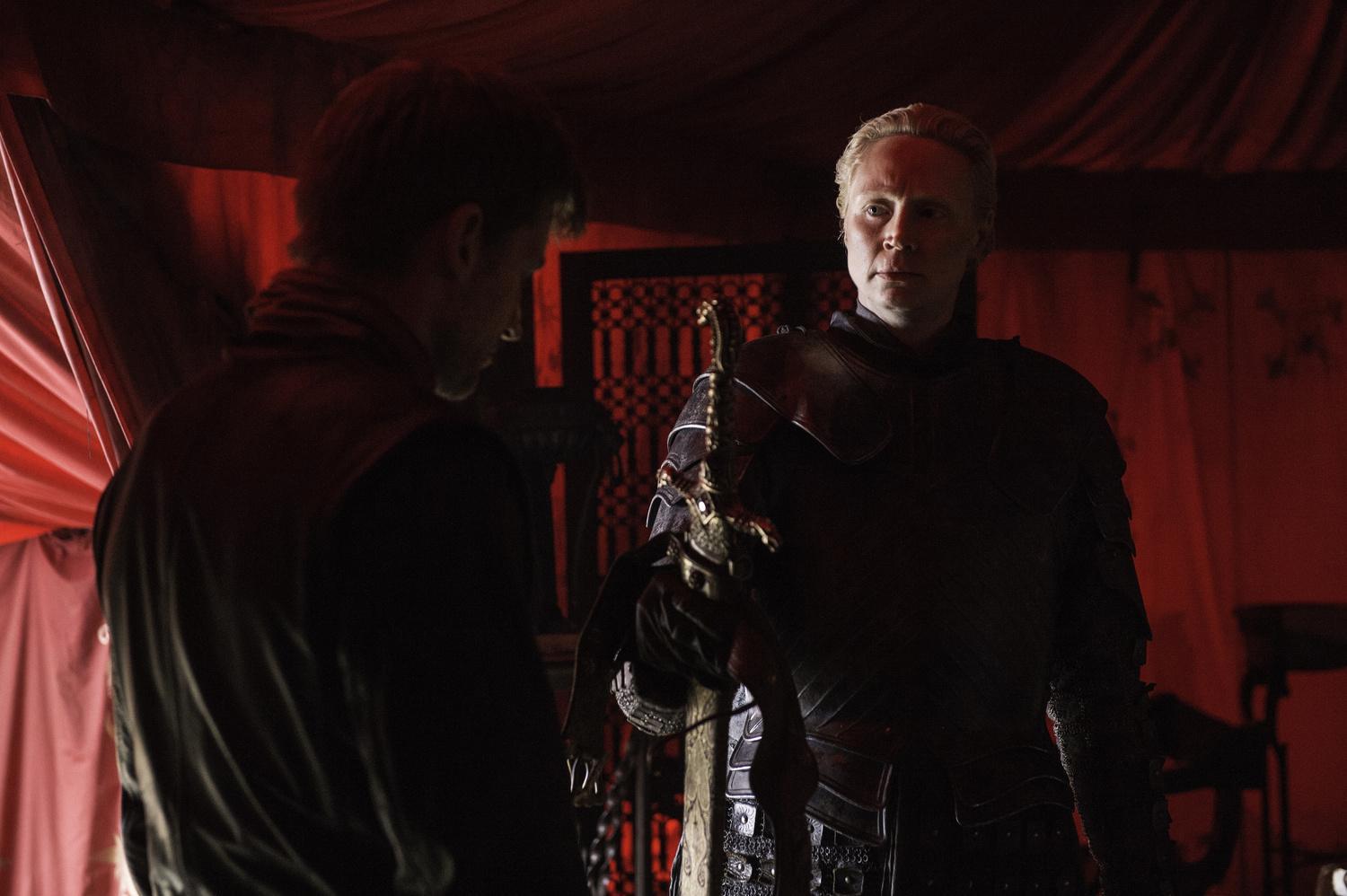 The newest episode of Game of Thrones featured the conclusion of the siege of Riverrun, and the climax of Arya’s time in Braavos. So today we have a stack of new interviews from the cast and writers of the show, taking a deeper look into “No One.”

First up, Nikolaj Coster-Waldau discusses Jaime and Brienne’s relationship with IGN, describing “this subtext of a weird fondness and attraction between them that they never act on, and could never act on.” Basically the entire interview is candy for Jaime/Brienne shippers. The actor expresses enthusiasm for their moments in the episode, when Brienne and Jaime were reunited with Bronn and her squire just outside.

“What I love about the scene last night, the set up is brilliant. When Bronn surprises Pod in front of the tent, he says, “So what do you think? Are they f–king in there? Because I know he wants to f–k her. I’m sure she wants to f–k him. So what do you think?” And then we cut in and you just see these two people standing very stiffly and very correctly and trying to avoid talking about anything really personal, but being very correct.”

He articulates their feelings further, explaining, “Because the writers set this scene, the subtext is so clear that they’re happy to see each other, but they don’t know how to recognize that. The truth is that they’ve never, you know… Yes, Jaime’s been with his sister his whole life and that’s the love he knows, and God knows that’s a version of it. Brienne, she loved Renly I think, but they would never recognize the thing that there is between them because it’s just beyond imagination — or at least they would never allow themselves to go to that place.”

The moment in season 3 when Jaime reveals the truth of what happened when he killed King Aerys all those years ago, Coster-Waldau refers to it as “an act of love.”

As for the recently popular Tormund/Brienne ship, he says, it “seemed to me quite one-sided. I think Tormund is more into it than she is — or maybe I’m getting protective about the Jaime situation. I’m already being jealous on his behalf.”

There’s much more to the complete interview so check that out at IGN! 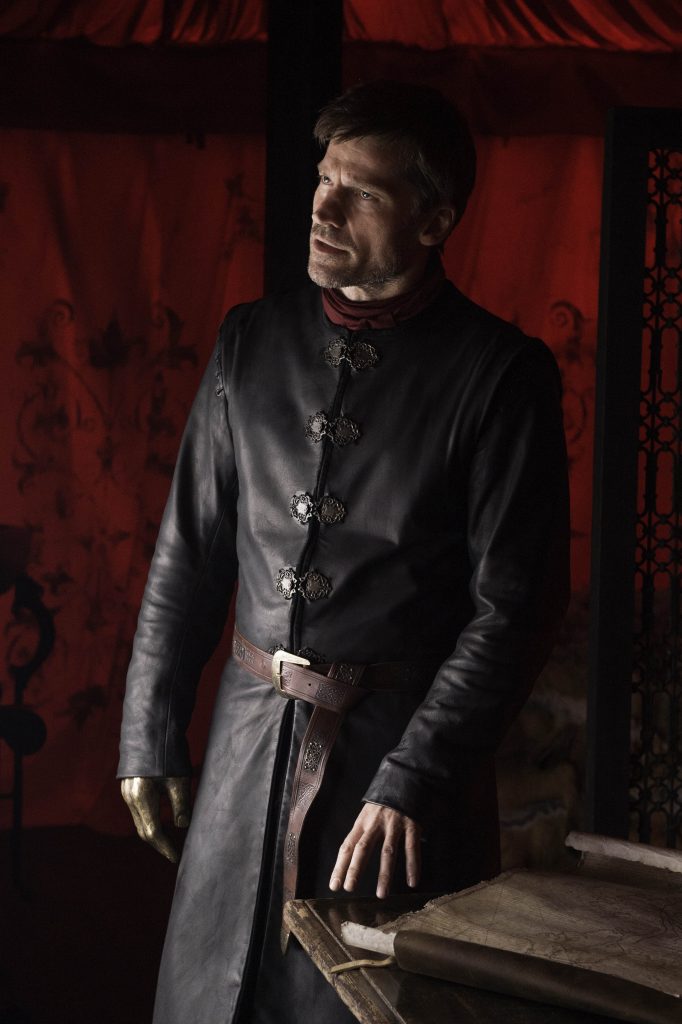 Christie raves about the meeting, saying, “I just loved that it was so formal, because within the confines of such formality, and having to negotiate with each other, there are so many other stories begging to be told in those moments. There’s a slow process of creeping familiarity among two people who haven’t been together for a long time; it was allowed to build. And I love that Brienne asserts her intelligence and her newfound mind of strategy and negotiates with Jaime and gets the outcome she wants – he allows her safe passage to go in and negotiate. It wasn’t cliched in any way.”

Her co-star adds, “Sometimes, with both of them, you just want go, ‘For godssake, let it go for a one second. What about what you want?’ They never listen to themselves. And what I love about the end of this scene is there’s some heartbreak. Because, once again, they were close. But are they ever gonna be able to talk about something other than someone else’s agenda?”

We also saw Jaime averting a bloody battle in “No One” by maneuvering Edmure into giving up Riverrun without a fight.  Coster-Waldau says Jaime has grown into ” a very skilled negotiator.”

“I hope that the audience appreciates it because we’re cheating a little bit – we’re building up to this big battle with Lannister forces and the castle and a siege that’s going to be bloody and crazy. But then, no, it’s not,” he tells EW. “He resolves it by his intelligence and wit. He’s actually saving a lot of peoples’ lives by using words instead of arrows.”

See what else the stars of “No One” had to say over at EW! 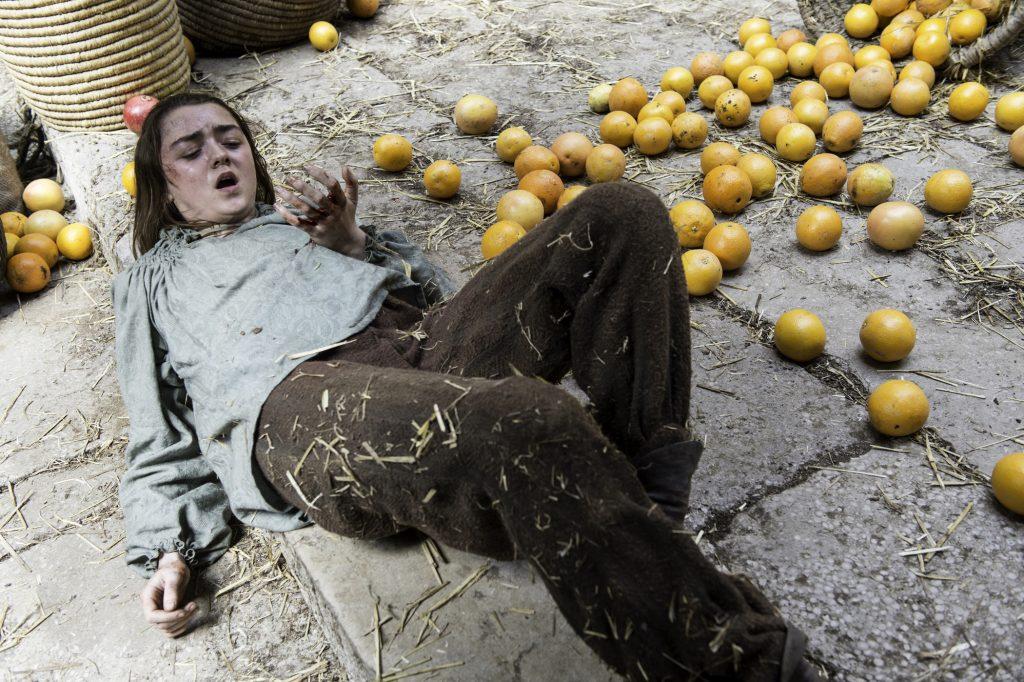 Maisie Williams discusses her big chase scene with the Waif, in Entertainment Weekly.The actress goes over the complexity of creating a stunt-filled scene where her injured character is essentially trying to lead the audience astray.

People are going to watch and be like, “Don’t put your blood on the wall. Have you learned nothing Arya? I hate you.” And then they’re going to be like, “Oh, she’s a smart girl.” There was this constant spectrum [of conversation with director Mylod] during the chase of about how petrified she needs to look, but also how safe she is. Arya’s been very lucky with the people she’s encountered so far. The whole time she was with The Hound she took a back seat because he was really good. So I wanted her to look like she was struggling. I didn’t want [the chase stunts] to be unnecessary or superhuman. I got on set and they were [going to have Arya] rolling around, and diving, and I was like, “That looks amazing, but no.” I’d be like, “Why would she run over there? She’d just duck under here and just get out.” It doesn’t look quite as cinematic, maybe, but they’ll have to find something else if they want cinematic. 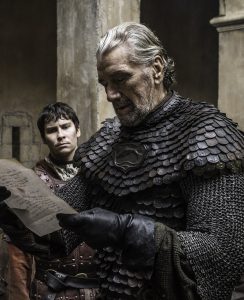 Clive Russell, who just returned to Game of Thrones in last week’s episode, talks to Vulture today about his character’s perspective and the end of the Blackfish in “No One.”

The Blackfish’s unceremonious killing off-screen has raised some eyebrows, but Russell stands by the choice. He likens it to the blinding scene in King Lear, and to a production of the play he took part in that performed the scene off-stage, something he found more effective.

You can have so much horror, and the violence in Game of Thrones is pretty near the edge, but I think in that case, it was absolutely right. What has been set up as an impregnable castle just suddenly dissolves by treachery, and that the Blackfish should die offstage is absolutely right. Plus, I didn’t have to do four weeks of rehearsal and get badly injured to look like a swordsman! I’m perfectly happy with that, to be honest. [Laughs.] I think there’s something chilling with a simple line like “The Blackfish is dead, my lord.

The Blackfish resolved to stay and defend Riverrun, refusing to join Sansa’s cause, and Russell provides more insight into his character’s inner thoughts.

He reads the letter and he goes, “She’s exactly like her mother.” That really gets him. And that’s the point where you think he’ll ride to the rescue. But he says he can’t because he has to protect Riverrun. Brienne tries to appeal to his sense of honor, his sense of family, because vulnerable members of his family need help. But even at that, he feels he can’t do it. He really has to defend his home, where he was born. He’s very conflicted, I have to say. It’s quite touching.

Russell also mentions that he’s recording “one of those spinoff animated lore things” for the Game of Thrones DVD, “in which I give the history of the castle, and how it never, ever had been breached.”

Russell discusses the Blackfish’s sexuality, speculates on what the Blackfish may have been up to since the Red Wedding, and more over at Vulture.

In this week’s Inside the Episode, David Benioff and D.B Weiss discuss Tommen’s choice to forbid the trial by combat, Jaime and Brienne’s complex relationship, and Arya’s return to her self.

Nikolaj Coster-Waldau discusses Jaime’s use of a believable threat to bring down Riverrun.

Emilia Clarke and Peter Dinklage share their thoughts on the chaos breaking out in Meereen, and Daenerys’ reaction.