Game of Thrones Post-Mortem of "A Knight of the Seven Kingdoms" | Watchers on the Wall | A Game of Thrones Community for Breaking News, Casting, and Commentary 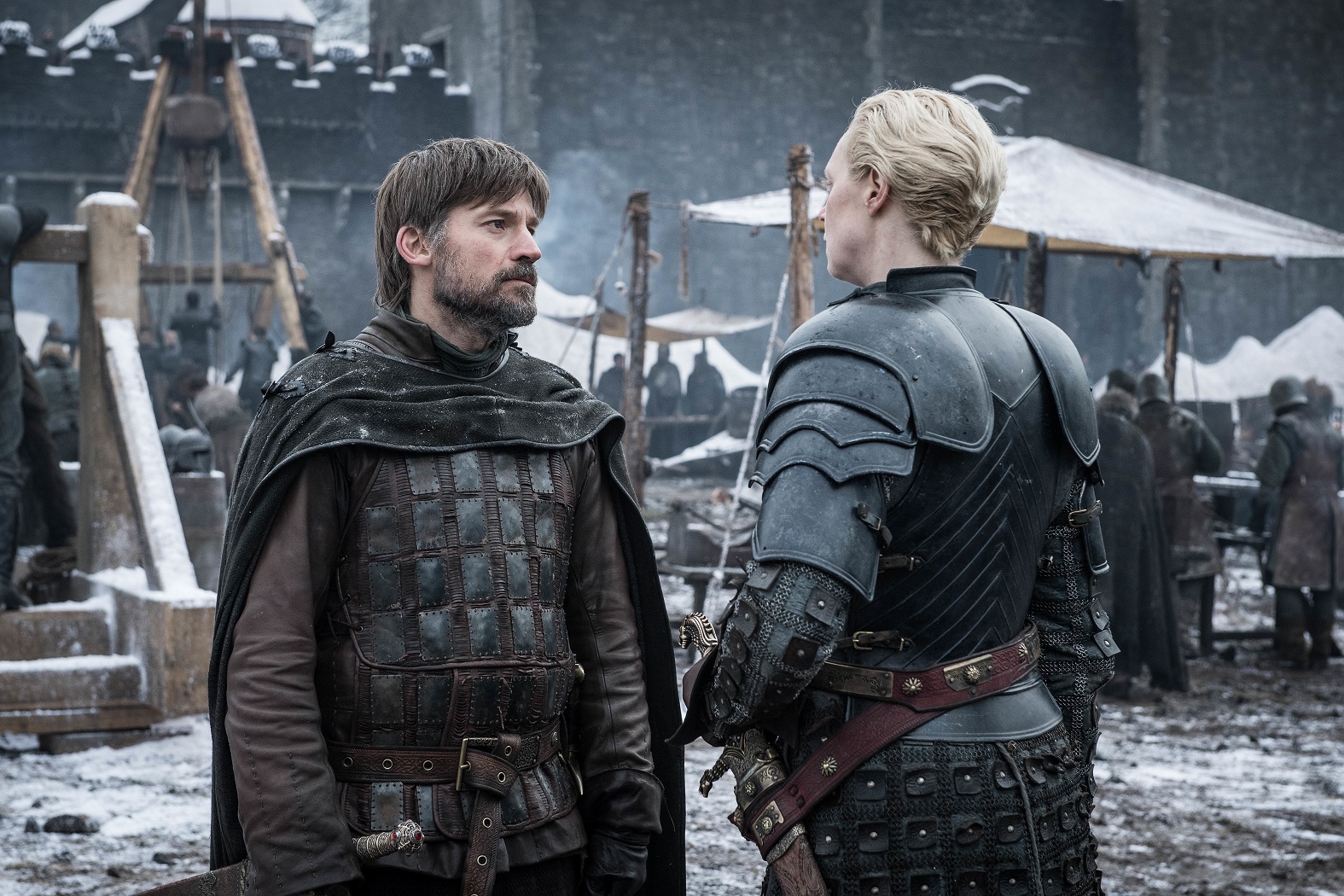 Game of Thrones knocked it out of the park last night with a character-centric episode designed to give us all the feels! There were so many emotional moments, like Jaime’s controversial arrival at Winterfell, his knighting of Brienne, Pod’s lovely singing(!), and Jon’s difficult revelation to Daenerys to name a few. It allowed us to reconnect with the people we’ve grown to know and love over the past eight seasons – right before they rip our hearts out next week. Before that happens, however, let’s dig into this episode’s interviews and videos!

Entertainment Weekly brings us a wonderful chat with episode writer Bryan Cogman, who states, “This episode is really a love letter to the characters. With most of our battles you get about 15 minutes of calm-before-the-storm with the characters participating in that battle taking stock of where they are in their lives before the dam breaks. This is an entire episode of that so that episode 3 can hit the ground running.”

Cogman discusses Jaime’s decision to knight Brienne, saying, “Jaime has been a knight of the Seven Kingdoms his whole life, but he’s finally becoming the knight he’s been chasing.” For the actual knighting, they “wanted to take the audience by surprise. It’s not a ceremonial scene on a cliff at sunset with billowing capes…It’s a moment of grace and beauty in the middle of a nightmare and the main reason I wanted to write this episode. The episode’s title, ‘A Knight of the Seven Kingdoms,’ refers to both Jaime and Brienne.” I’m not crying, you’re crying!

EW notes that Gwendoline Christie named this scene as the one she takes the most pride in, out of all eight seasons. “I thought about it so much and what it means to me conceptually. It’s so emotional for the character to get something she wants and to be acknowledged.” We know Benioff and Weiss gave all the actors a character storyboard as a parting gift, and that Christie’s was from season eight. I really hope this is the scene she received. 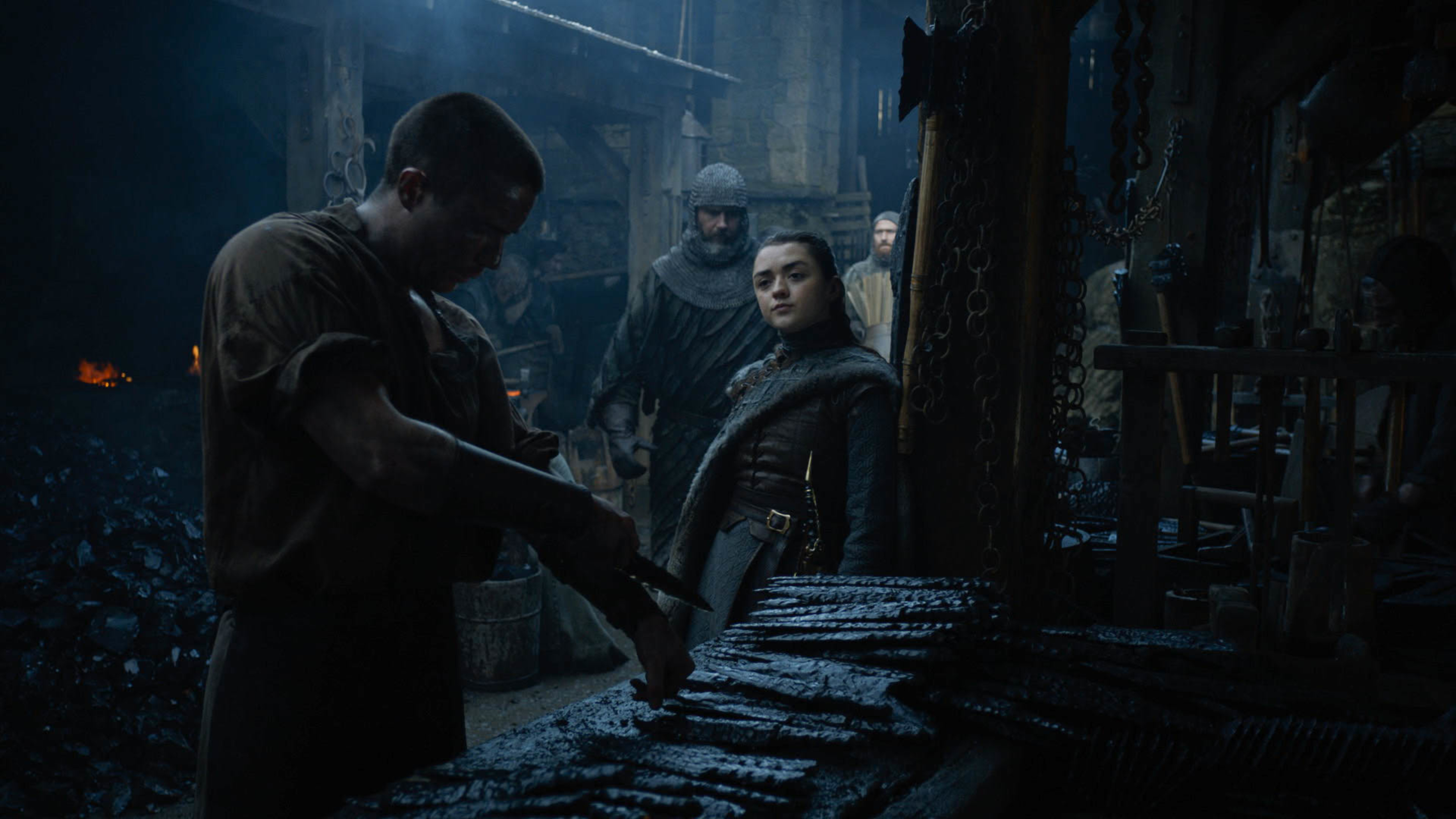 Speaking of Gendry and Arya (or should I say Gendarya now?), Maisie Williams and Joe Dempsie tell EW their own thoughts on their big scene. Williams confesses that she initially thought it was a prank, but that when she discovered it was really happening, she was given full control over how much of her body she wanted to show. She also stresses that the scene was respectful, but also strange. “No one wants to make you feel uncomfortable which kind of makes you feel more uncomfortable, because no one wants to look at anything that they shouldn’t look at, which in turn makes you feel like you look awful…You want people to act more normal.”

It was similarly awkward for Dempsie, who admits, “It’s obviously slightly strange for me because I’ve known Maisie since she was 11, 12 years old. At the same time, I don’t want to be patronizing toward Maisie — she’s a 20-year-old woman. So we just had a lot of fun with it.” Judging by the fan reactions it was strange for many people, but if anyone deserves some happiness, it’s Arya.

Williams concurs. “David and Dan were like, ‘It’s the end of the world, what else would you have her do?’ This maybe is a moment where Arya accepts death tomorrow, which she never does — ‘Not Today.’ So it was that moment where she says, ‘We’re probably going to die tomorrow, I want to know what this feels like before that happens.’ It’s interesting to see Arya be a bit more human, speak more normally about things people are scared of.” Here’s hoping she and Gendry survive long enough to explore their relationship further! 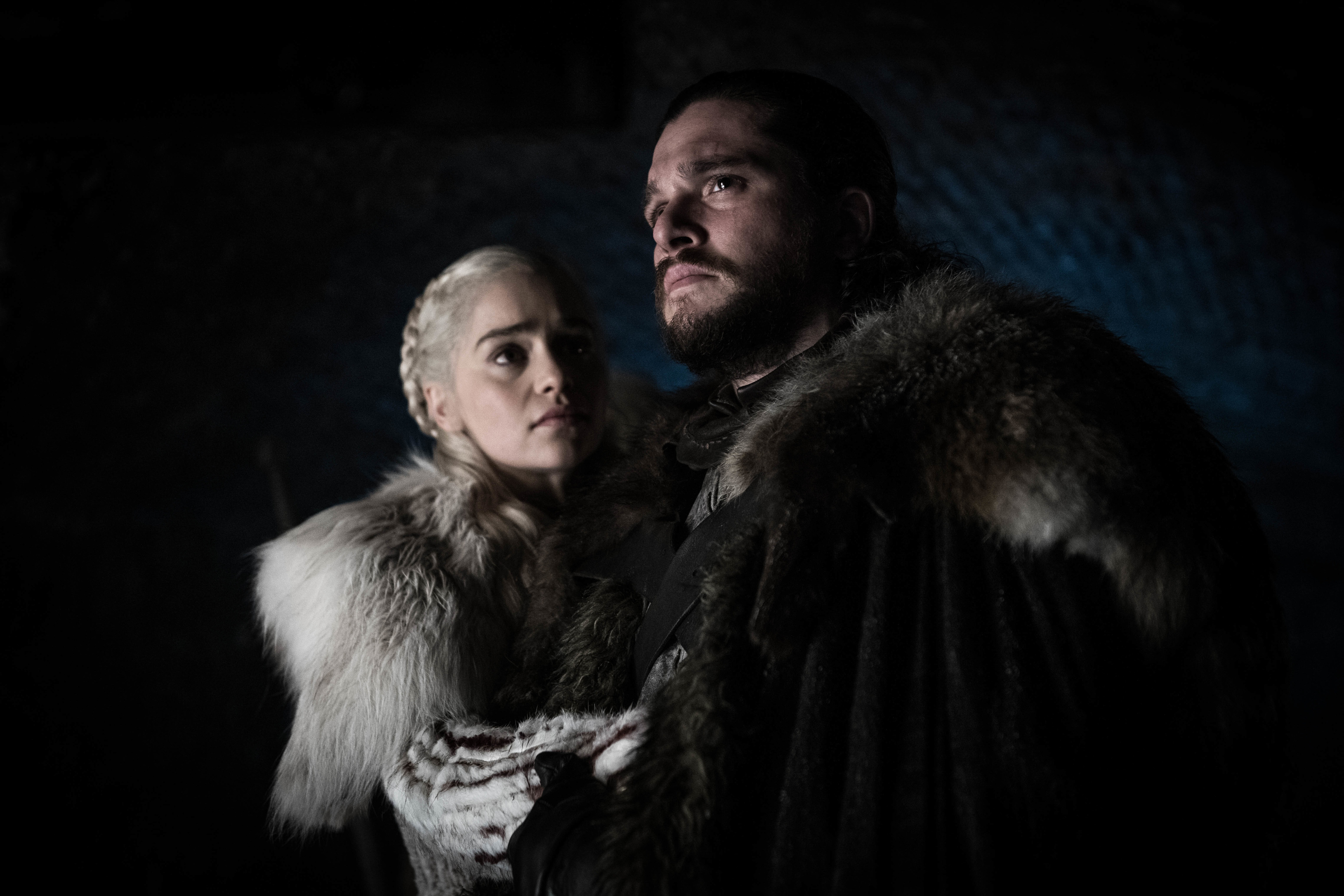 One relationship that’s not heading in a positive direction is that of Jon and Daenerys. Jon finally told her the truth of his parentage, and Dany didn’t take it well. This could be reasonably expected given the situation, but many fans have a much less charitable view of her reaction. In an interview with EW, however, Emilia Clarke defends her character’s response to the news.

“The related thing, to her, is so normal. She could have easily married her brother. It’s not a thing. It’s a thing for Jon, but let’s just forget about that. The main thing is we’re up for the same promotion and I’ve been working for it for my entire existence.” She adds, “This is my whole existence, since birth! Dany literally was brought into this world going: RUN! These f—ers [in Westeros] have f—ed everything up. Now it’s, ‘You’re our only hope.’ There’s so much she’s taken on in her duty in life to rectify. There’s so much she’s seen and witnessed and been through and lost and suffered and hurt to get here…and Jon doesn’t even want it!”

It’s interesting that Clarke notes that “the related thing” is an issue for Jon, since we don’t see that in the episode. Perhaps it will come up later? I do appreciate her take on Daenerys considering the backlash the character has received, and…she’s not wrong. Assuming they survive the battle for Winterfell (which, of course they will), they will need to work out their problems and present a united front to keep their fragile alliance together. 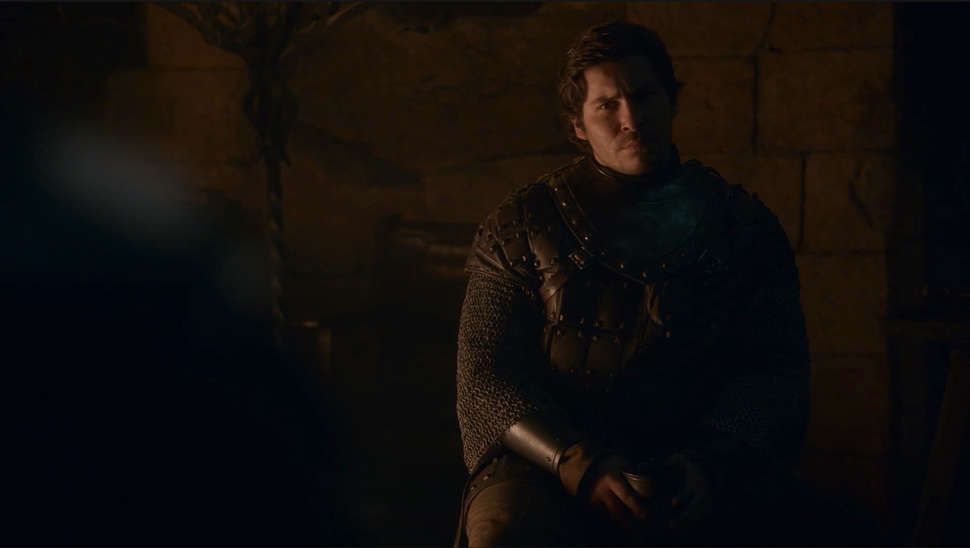 One of the biggest highlights of the episode – especially for book readers – was Podrick’s beautiful and haunting rendition of “Jenny’s Song.” Daniel Portman admits to Esquire that he was completely unprepared for it, however. “They just put it in the script and they didn’t really tell me. I was terrified to be singing in front of all these people with this camera in my face. And something like a billion people have seen the first episode. So thinking about that many people seeing me singing was terrifying.” Don’t worry Daniel – we all saw, and we all loved it!

Portman also shares why he believes fans have such an attachment to his character, saying, ‘It’s the innocence, it’s the honesty and the sweetness in a world where there isn’t a lot of that. There’s a lot of Machiavellian tactics and underhandedness, and to have a guy who is none of those things and is just as honest to the core and selfless and loyal – people like when they see something good happening to him, you know?” I couldn’t have said it better. If Pod dies, we riot!

The entire interview is well worth a read, so check it out at Esquire. 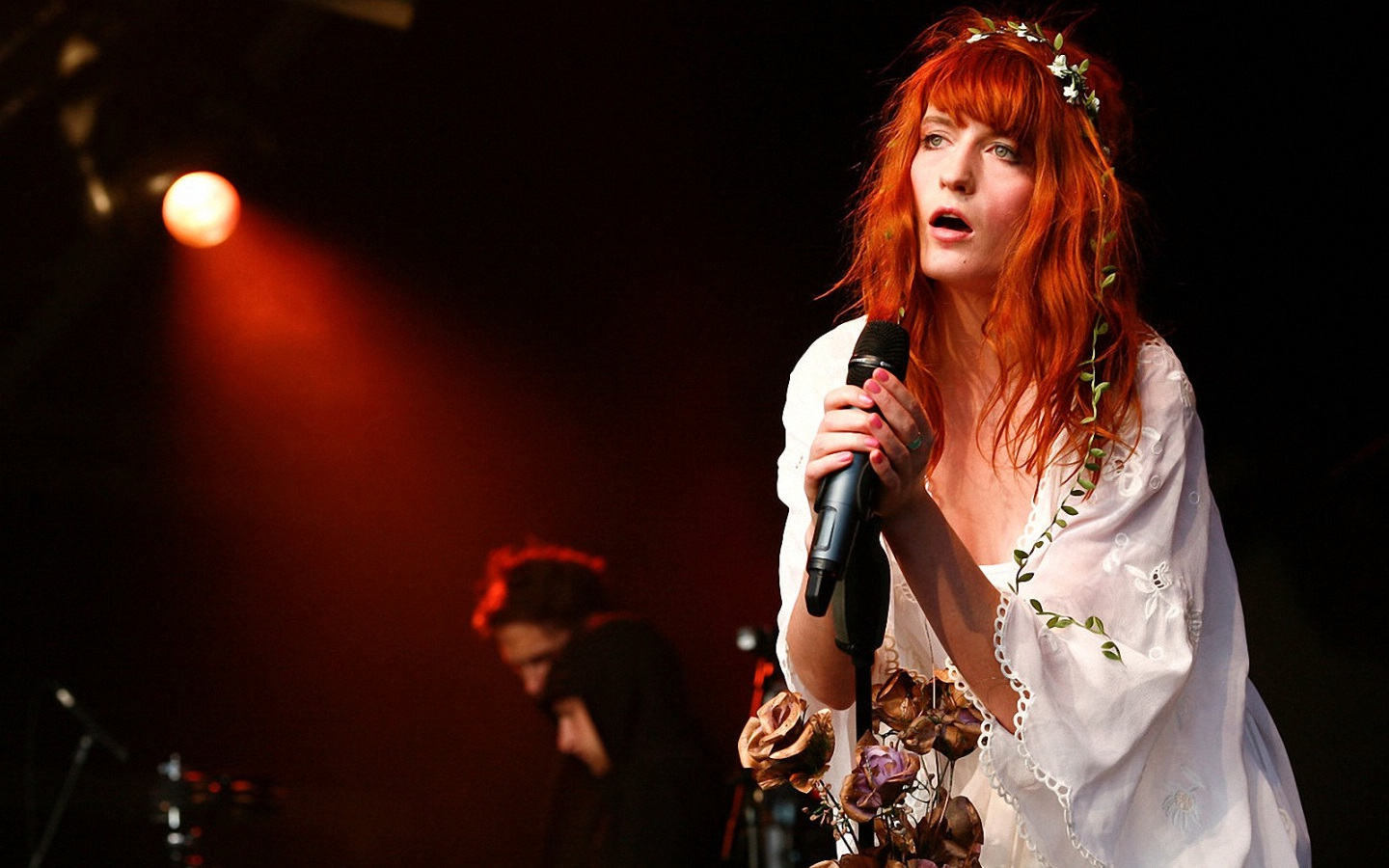 Finally, The New York Times speaks to Florence and the Machine frontwoman Florence Welch about her band’s version of “Jenny’s Song” that played over the episode’s end credits. When showrunners Benioff and Weiss approached her with the song, “They just had a simple, stripped back, lilting melody,” Welch reveals. “The notes of it sounded like a Celtic folk song to me. I thought it was really beautiful. I love the idea of dancing with ghosts and never wanting to leave.That totally makes sense to me. I feel like I do that every night on stage.”

“I worked with Thomas Bartlett on ‘High as Hope,’ and he’s a piano genius. He helped formulate the chords, and then I kind of added my choir, my hellish soprano. We just tried to keep within the Game of Thrones world, to retain the ghostliness of it.” I’d say mission accomplished.

Welch admits she wasn’t given any backstory about the song’s importance at the time, which she believes was for the best. “What I wanted to do with this song was keep it as sparse as possible. It does get a bit more rousing at the end, but I really wanted to retain the simplicity of the melody and the lyrics that they sent me, because I found them so moving. If I had known the history of the song, I would have been like, ‘[Expletive], we need fanfares, and you’re going to have to get a dragon on here somehow.’ I might have — as I can do sometimes — overblown it.”

In this week’s “Inside the Episode,” David Benioff and Dan Weiss talk Jaime’s trial, Brienne becoming an knight, Jenny’s Song, and more.

Nikolaj Coster-Waldau, Isaac Hempstead Wright, and Gwendoline Christie dissect Jaime’s arrival at Winterfell (this video is from the HBO website and can only be viewed in the United States).

Several cast members share their thoughts on the characters’ last night in Winterfell before the battle.

“The Game Revealed” gives us a detailed look at Winterfell’s expansion and the arsenal of dragonglass weapons, and cast and crew discuss key moments from the episode.

If you missed next Sunday’s preview, check it out below!