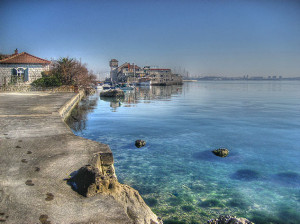 It’s not known at this time what purpose this new location will serve. In previous seasons, the Split region has largely served as home to Daenerys Targaryen, with Emilia Clarke filming in Diocletian’s Palace, and nearby at the Klis Fortress and at the Zrnovnica quarry.

Sue the Fury:  My first thought for this area is Braavos, with the waterfronts. Anyplace near sandy shores could stand in for parts of Dorne, but the photos of the town, the buildings and the marinas, seem like a great fit for Arya’s storyline.