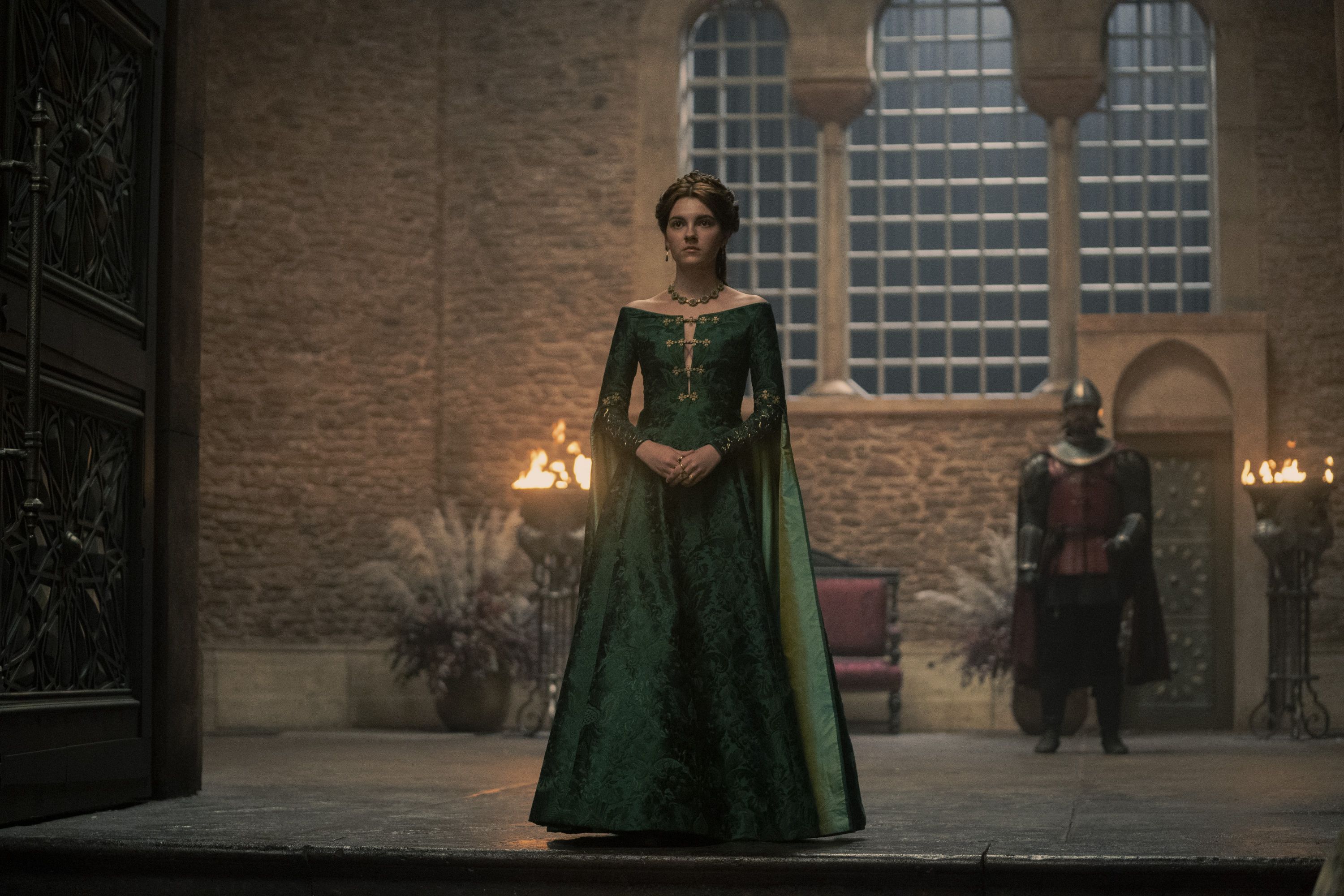 After last week’s hiatus (apologies), Game of Threads is back to cover courting, betrothals, weddings, colors of war, and all things in between from the past two episodes. 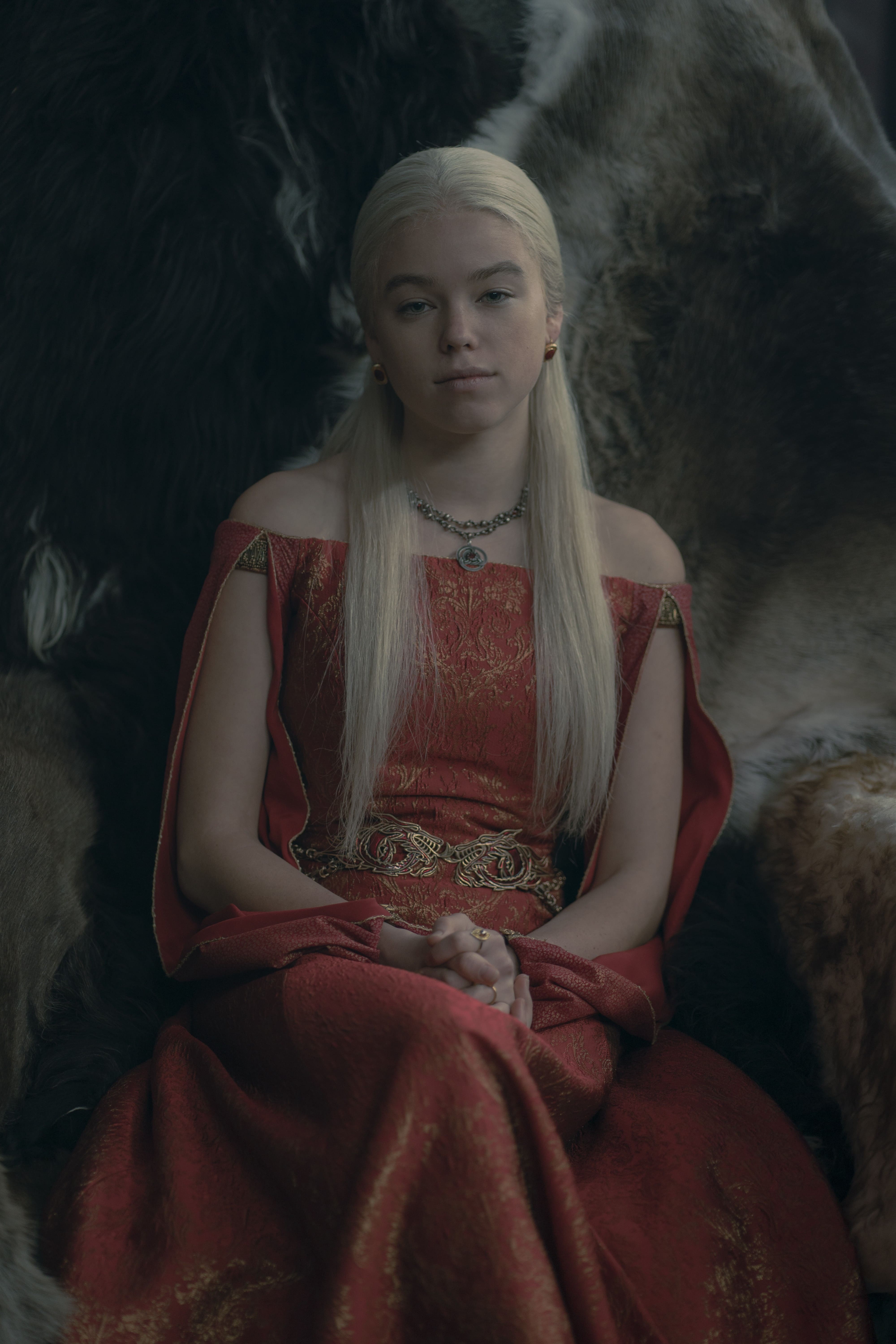 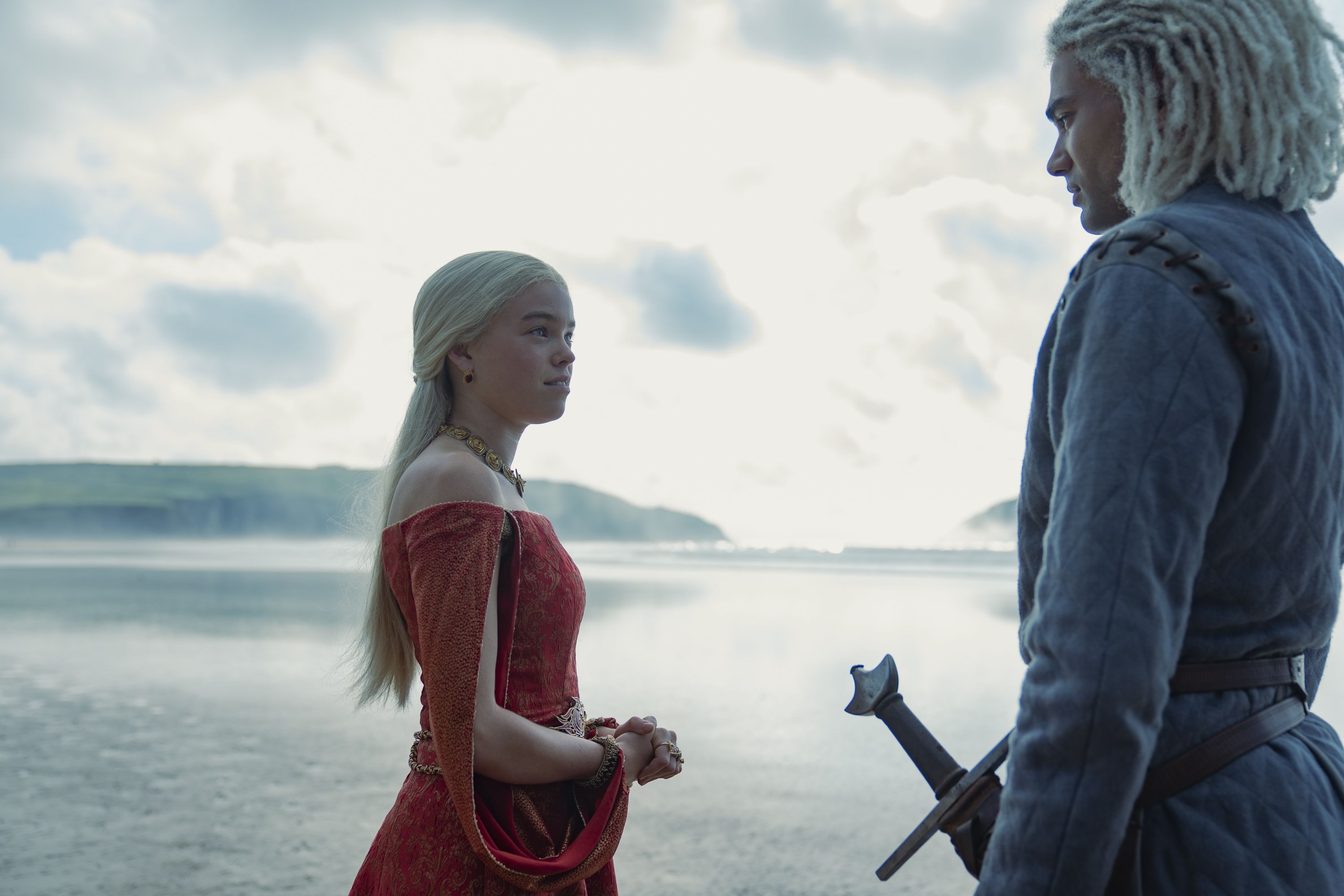 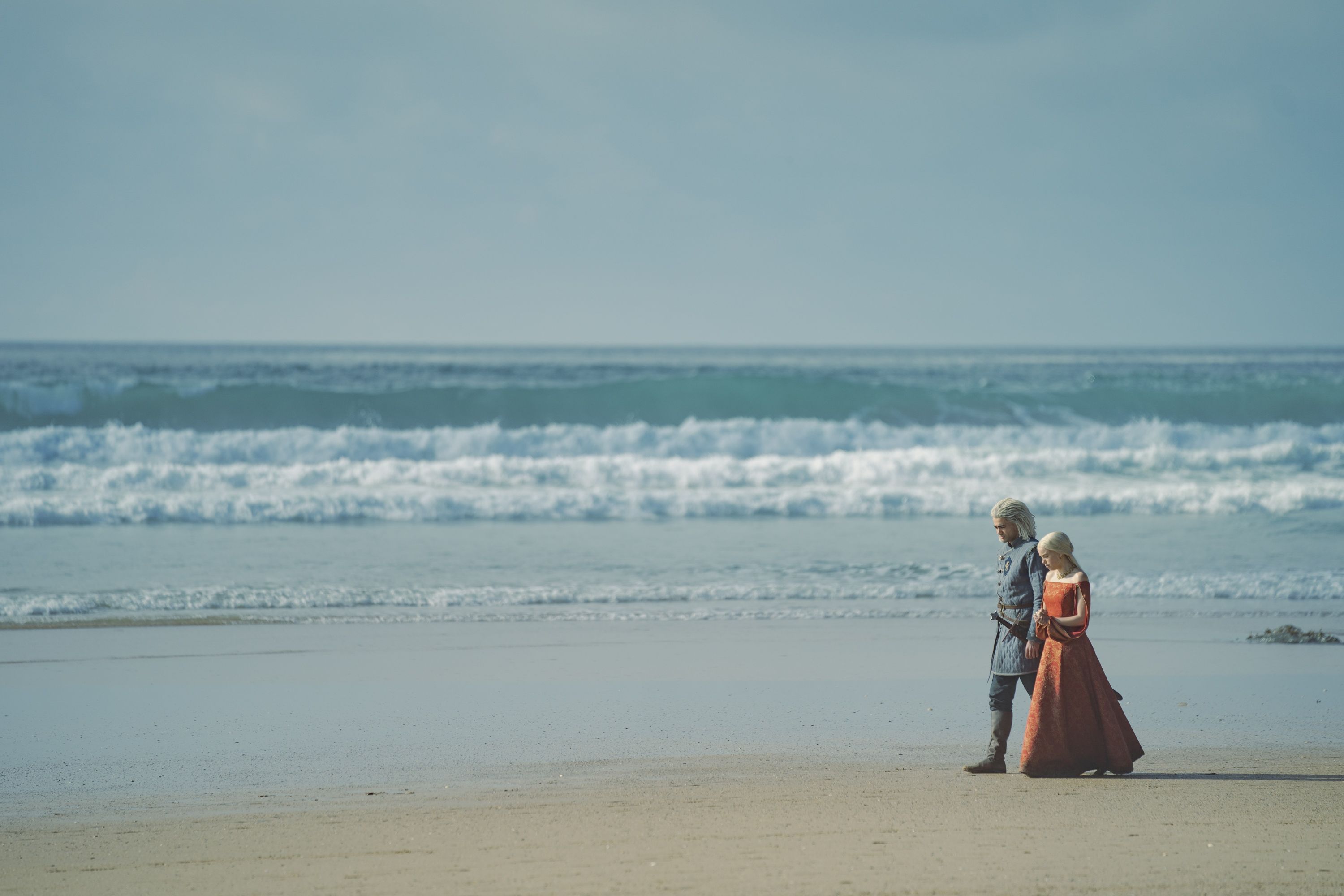 Both episodes feature Rhaenyra in what I’m calling her “courting dress.” She wears it both while fielding suitors, and while she walks and talks with Laenor as they are being betrothed by their parents. The silhouette is more revealing than what we’ve seen he wear in the past, and rendered in a vibrant red, so it assures that all eyes are on her. It almost brings to mind “peacocking” to attract a mate, though I’m certain this was not Rhaenyra’s design but instead something that someone else chose specifically for this purpose. Still, she maintains the upper hand in both situations in a dominant color. 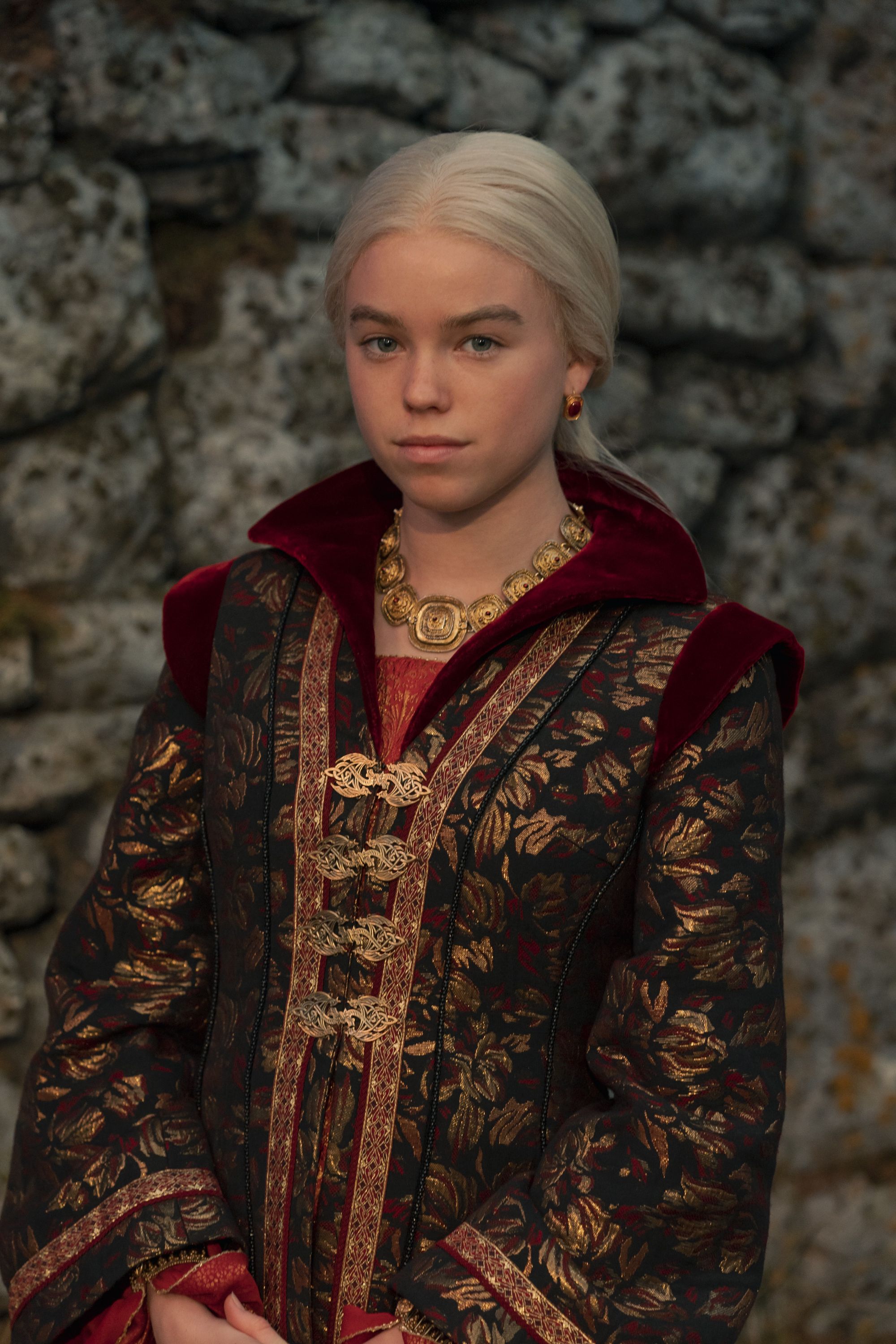 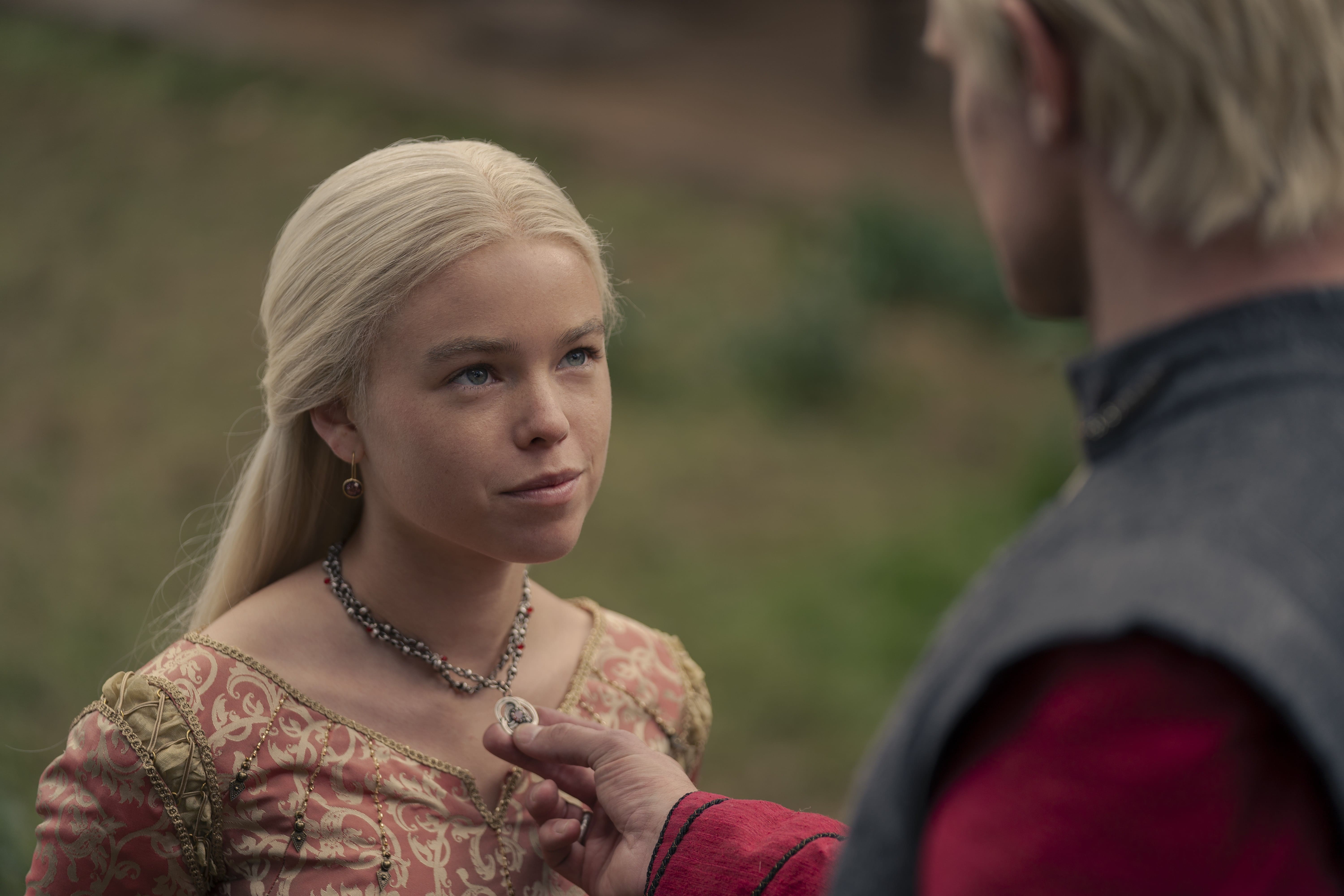 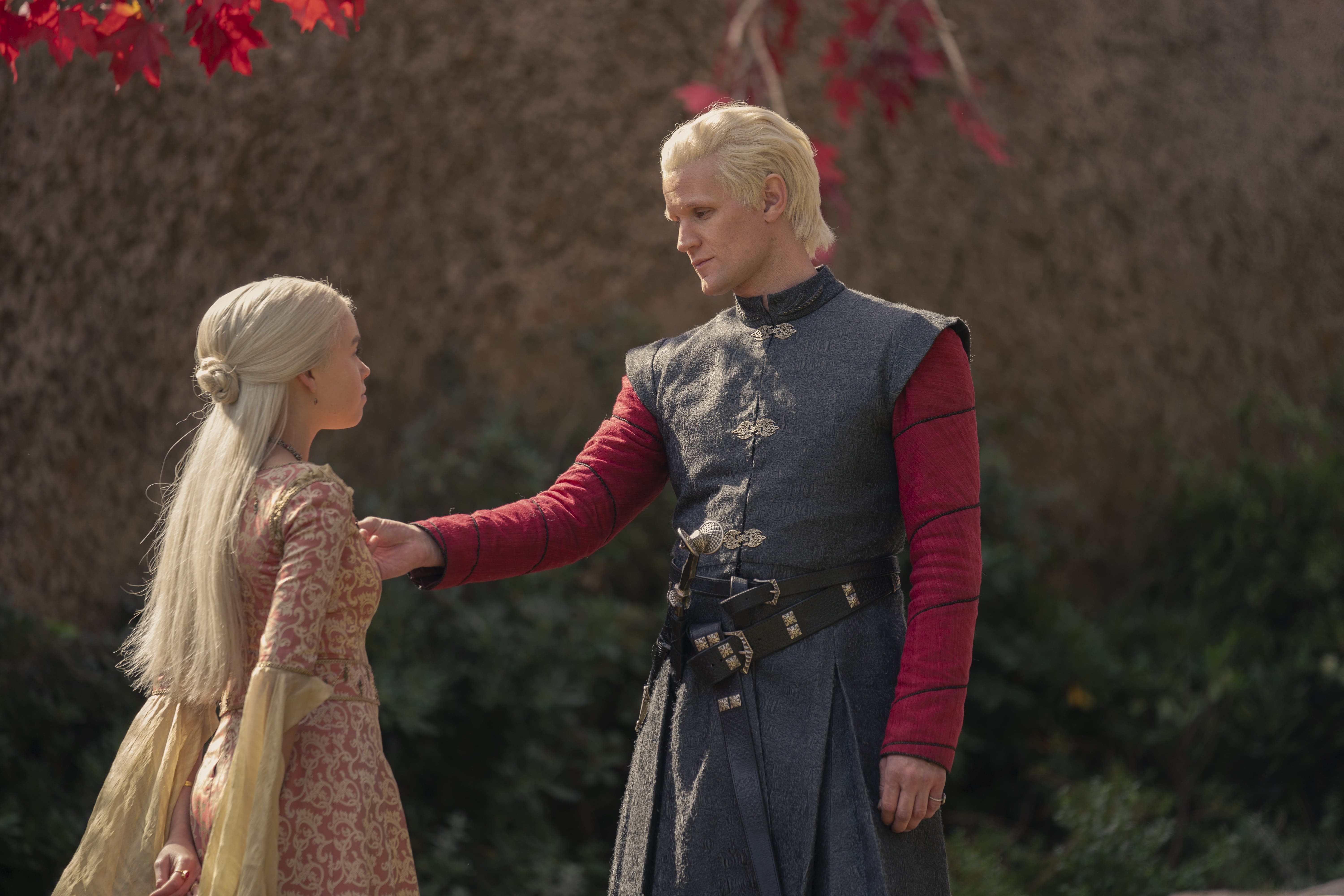 The color, however, mutes when she’s around Daemon. He still has sway over her and you can see it, visually, as he is the one in the bright red, as her red blushes and mixes with gold and her silhouette goes back to a more girlish and innocent projection. 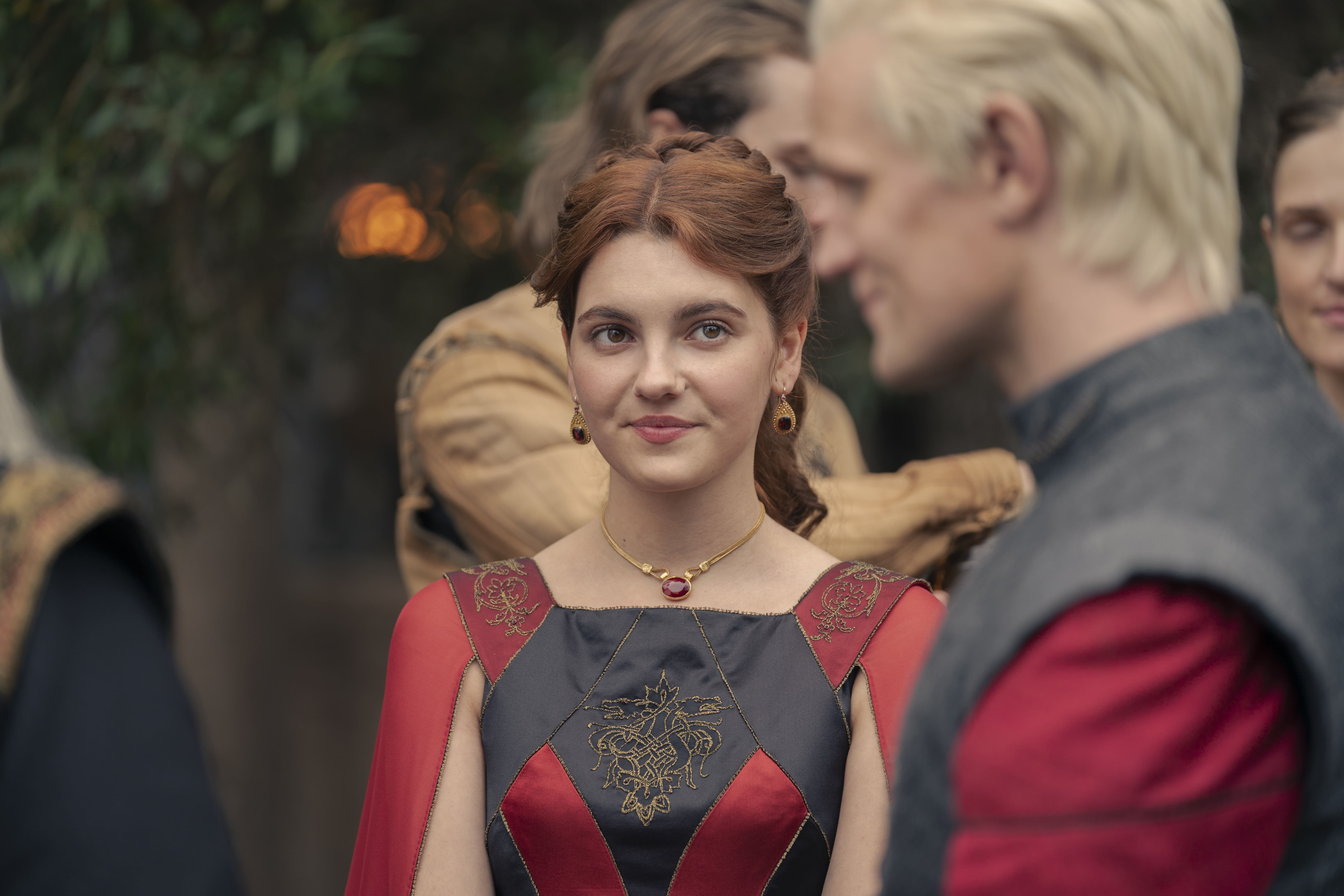 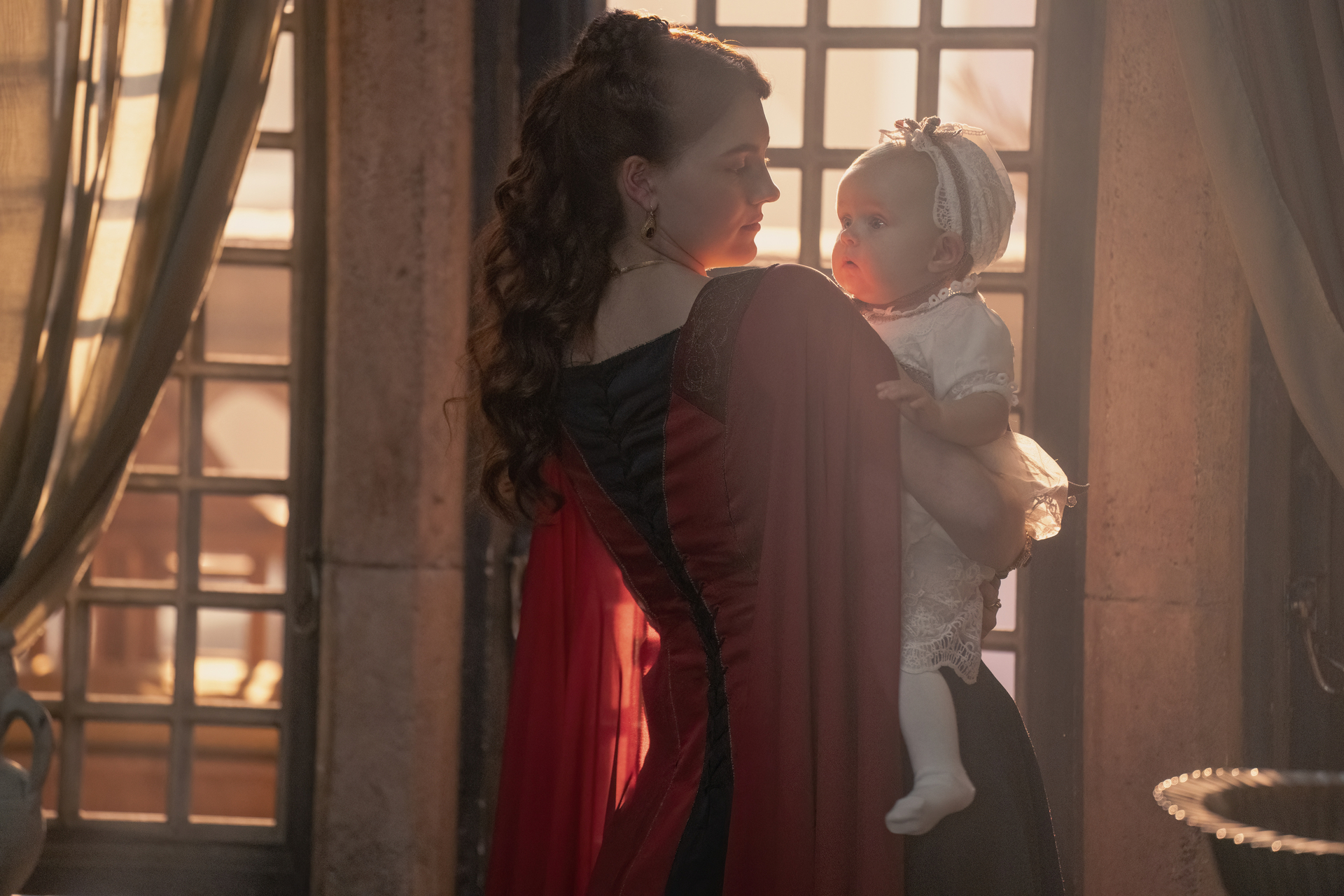 The only other person in a dominant color is Alicent, who has taken up cosplaying as a Targaryen. She’s grasping at trying to have friends and allies at court, so she thinks dressing in the colors of her husband and Rhaenyra will help her to blend in and cement her future as queen while Viserys’ health fails. 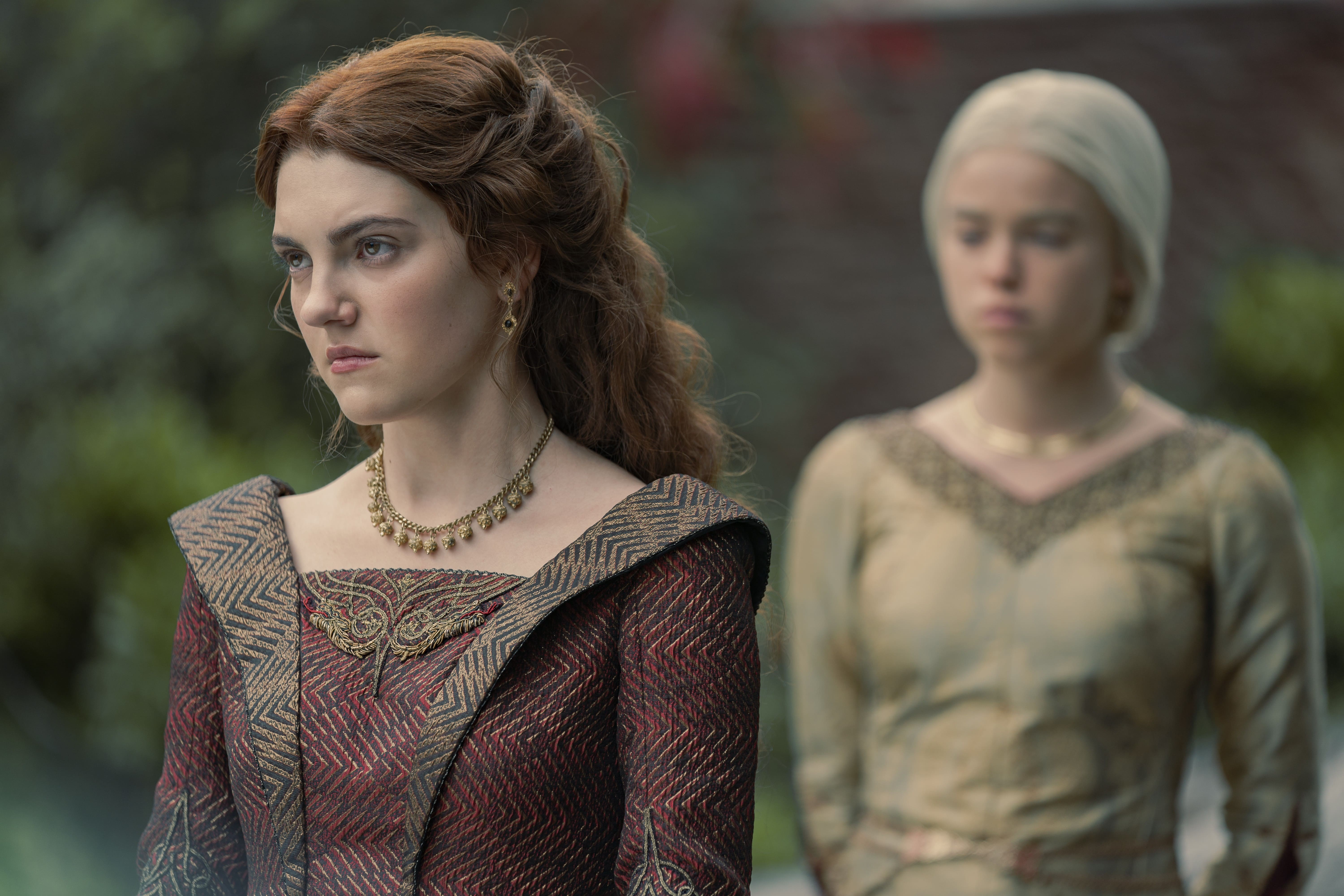 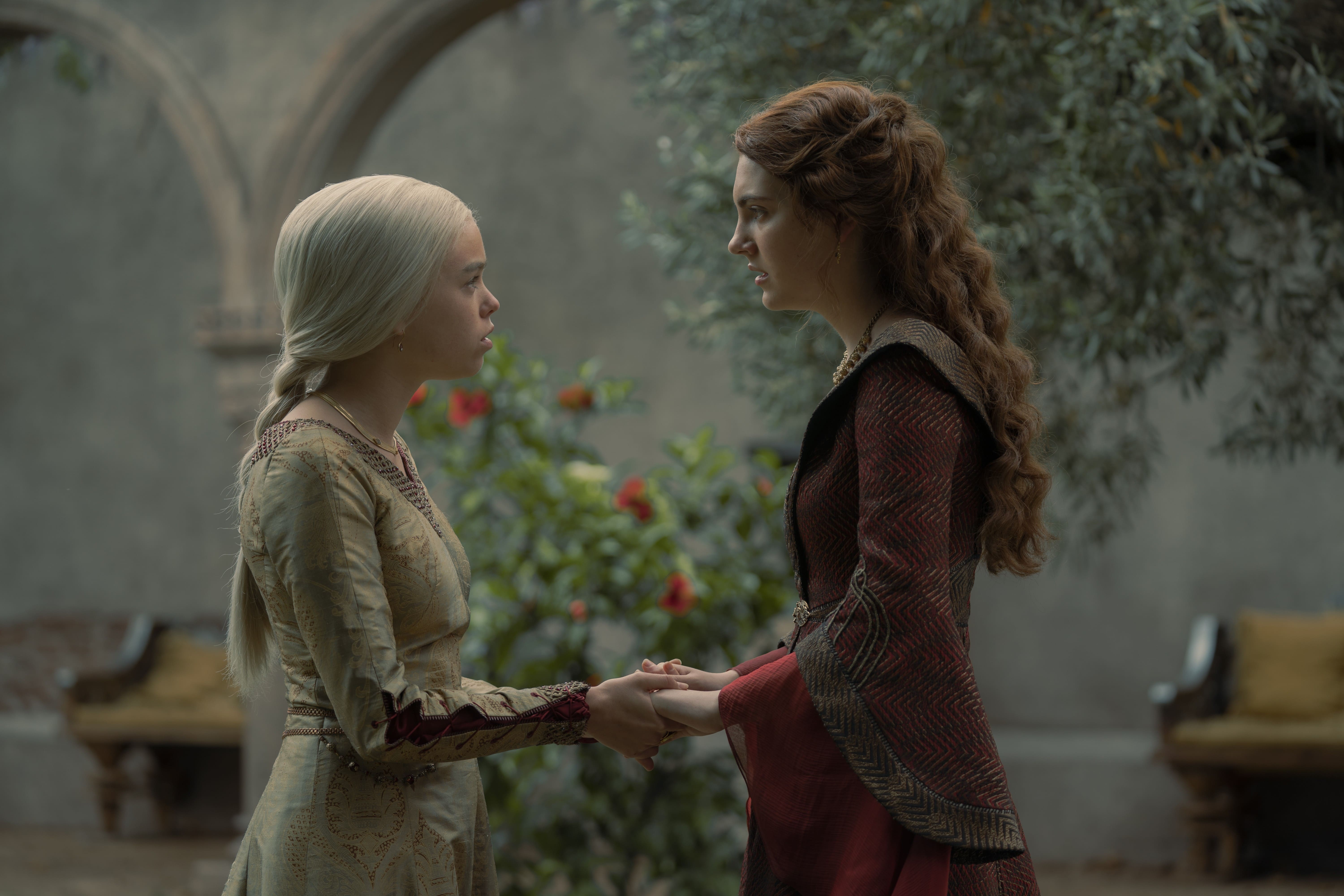 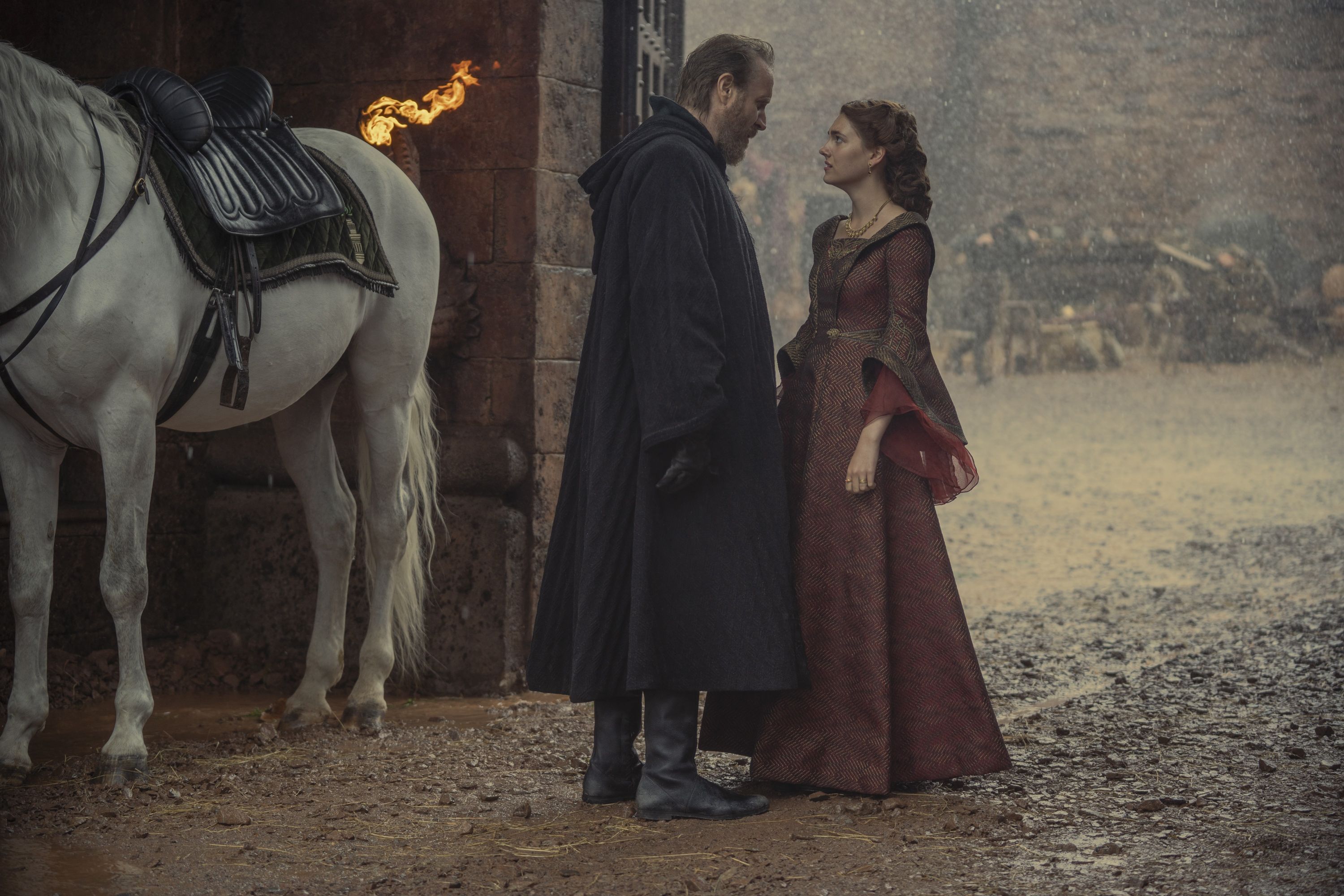 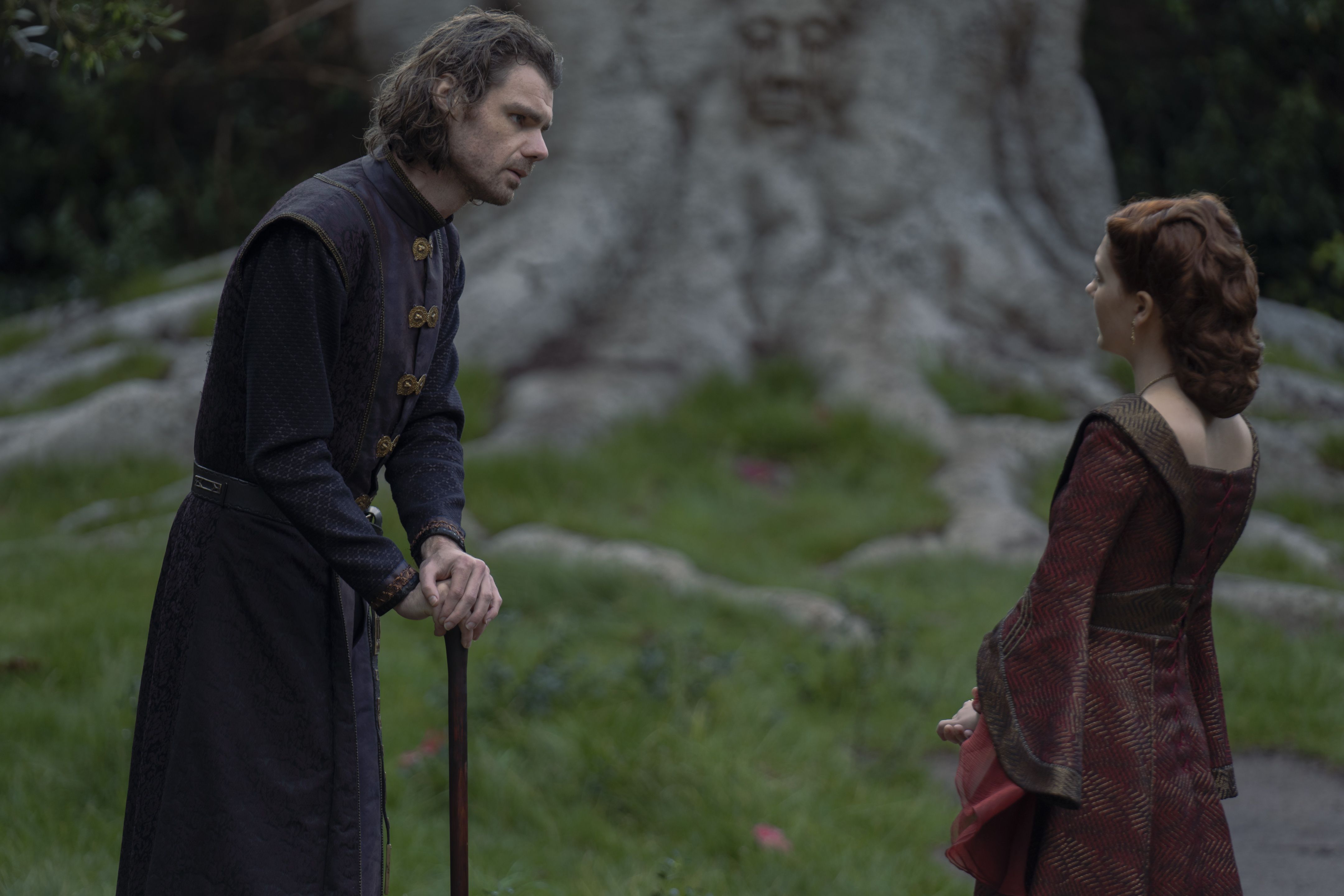 She wears another more structured red dress while questioning Rhaenyra regarding her and Daemon. Alicent takes on the role of a Queen and stepmother, while Rhaenyra lies to get out of a scolding, as a teenager would do. Though they are of a similar age, their paths have lead them in different directions where Alicent has been forced to grow up faster than Rhaenyra, and that is shown in the way that she dresses in very stylized and structured silhouettes, while Rhaenyra maintains a youthful air about her. The red that Alicent wears here is not as dominant a red, but still has a loftiness to it that juxtaposes each of the girls’ positions. Cut to Viserys dismissing her father. This is the last time (I’m assuming for the rest of the season) that we will see her in red. It’s interesting to note that her two “allies” that she speaks with while wearing this last red dress, Otto and Larys Strong, are both wearing shades of blue, which hints at her shift from the color red. 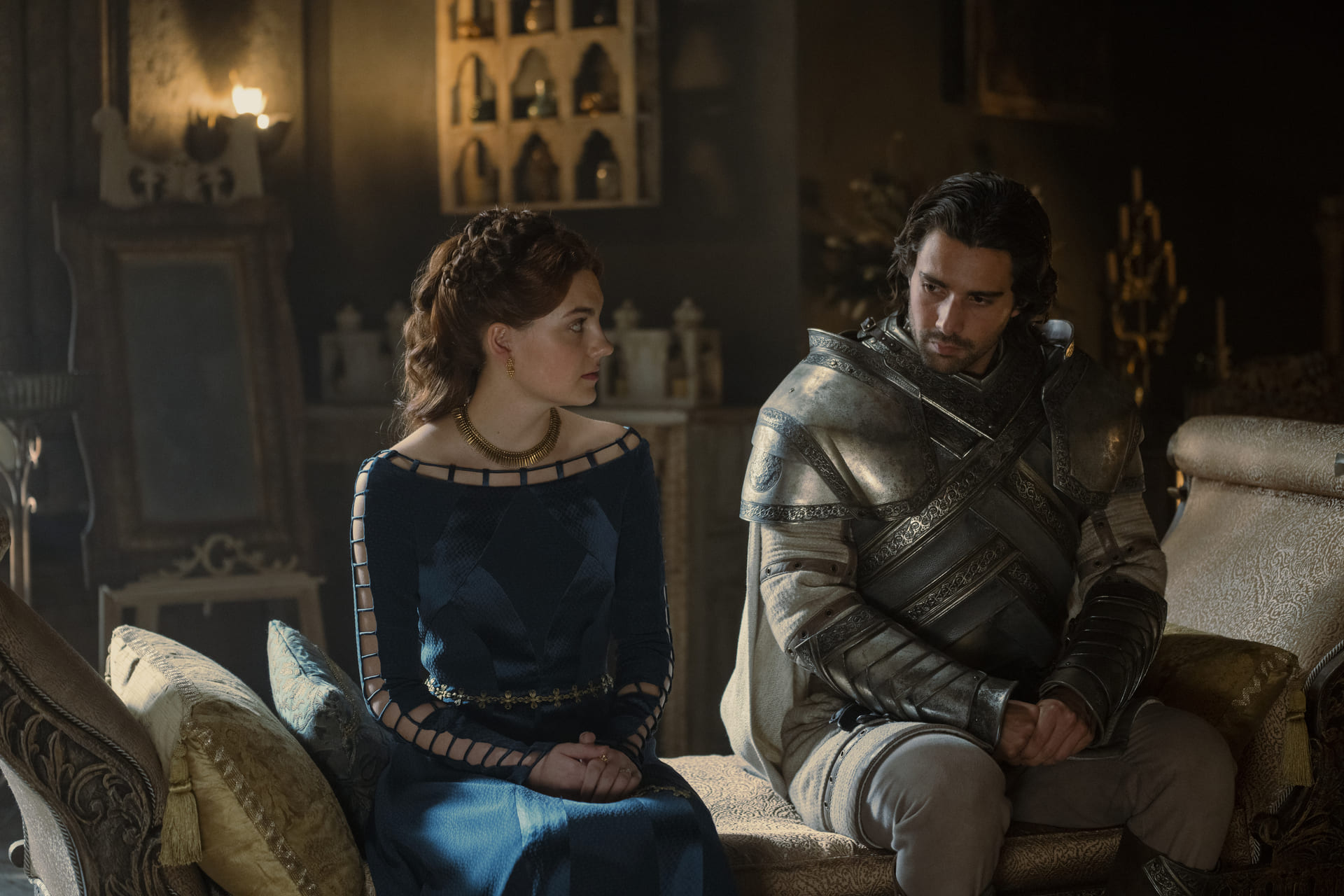 While Viserys and Rhaenyra are off in Driftmark, Alicent takes it upon herself to question Ser Criston. She’s back in her “takes agency” dress, but it’s also her “unraveling while keeping it together” dress, which beautifully shows her doing just that after Criston’s confession. She wears the dress watching Viserys and Rhaenyra arrive back to the Keep with a shot of her that calls to mind Lady Macbeth plotting on her battlements. 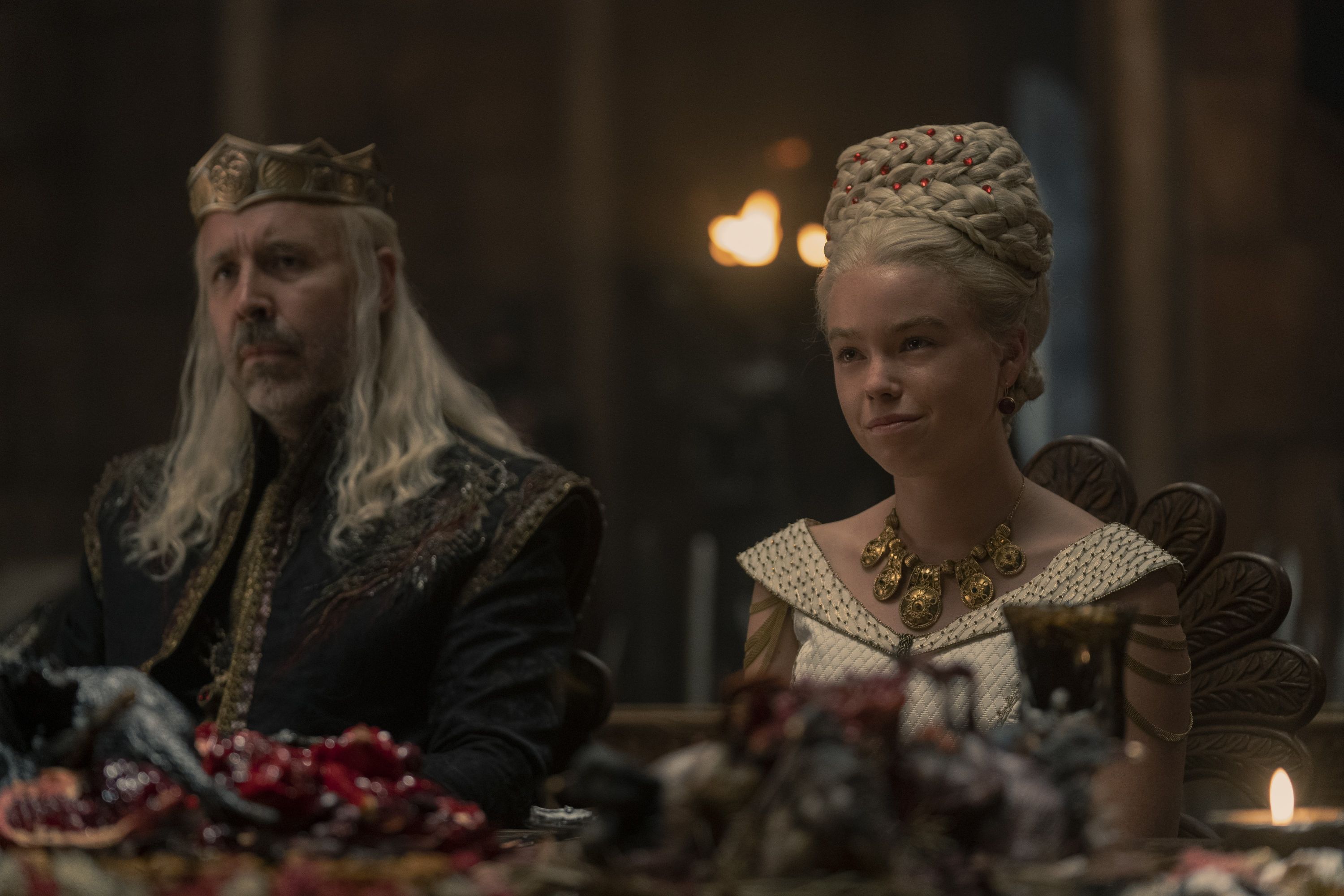 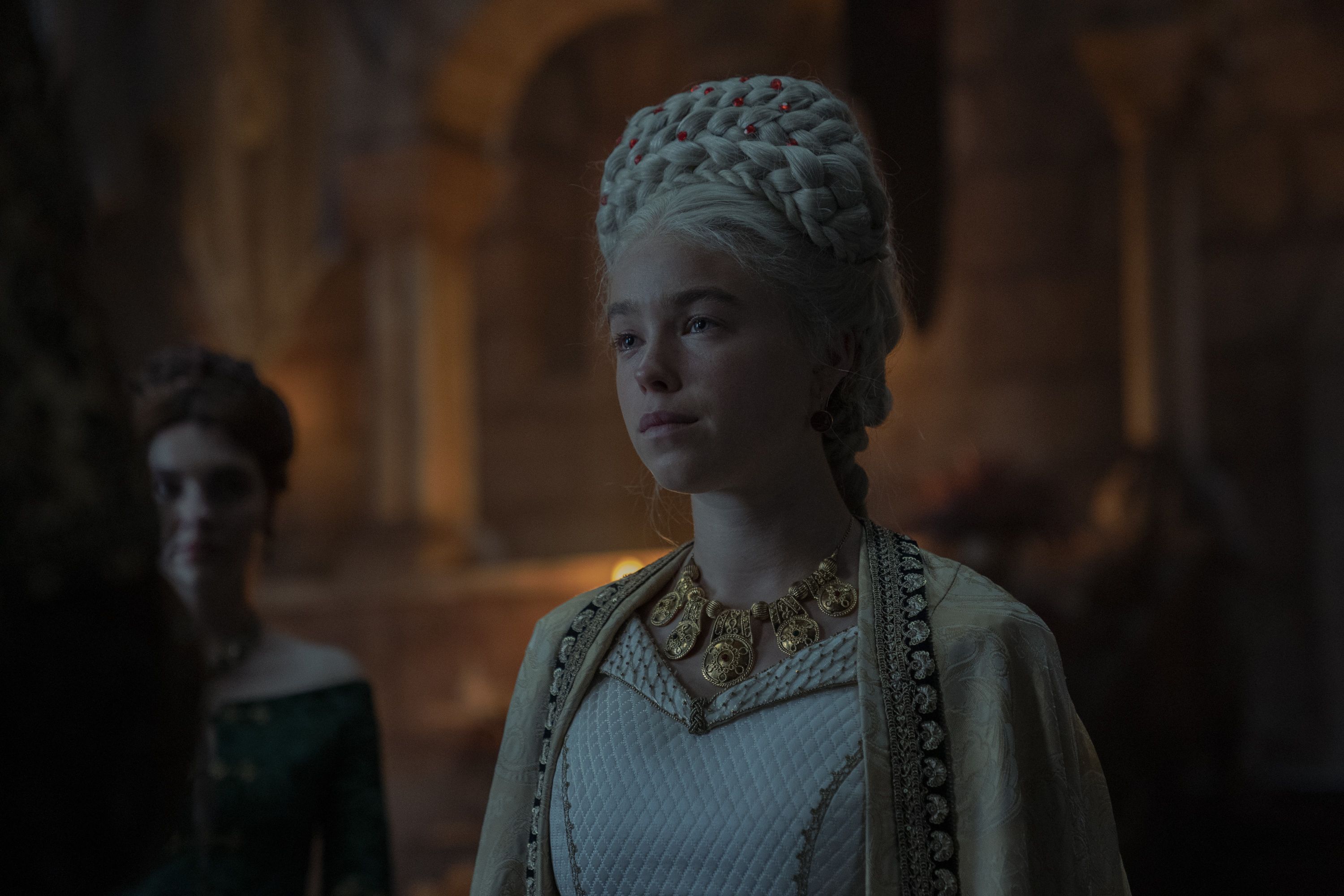 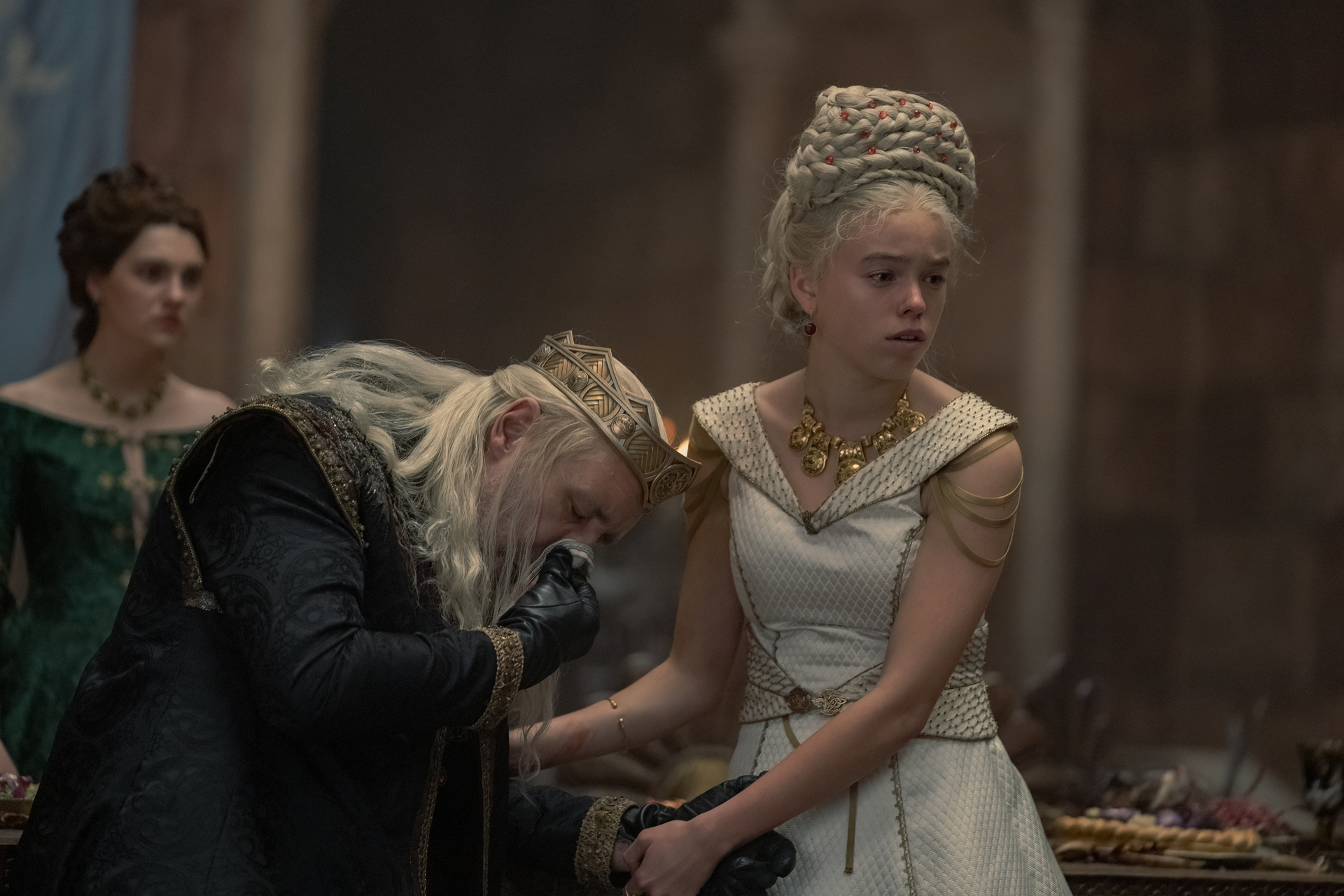 Rhaenyra’s wedding day comes and she bedecked in white fabric that is manipulated to look like dragon scales, queenly gold and red jewels (which forebode the later bloodshed), and hair that Season 1 Cersei would envy. The dress is very pretty and fitting of a royal, but again, still has a youthful aspect to it, and an almost minimalist design. Rhaenyra doesn’t strike me as someone who’s spent years imagining her wedding dress, so it’s appropriate that she’d keep it simple for the most part. 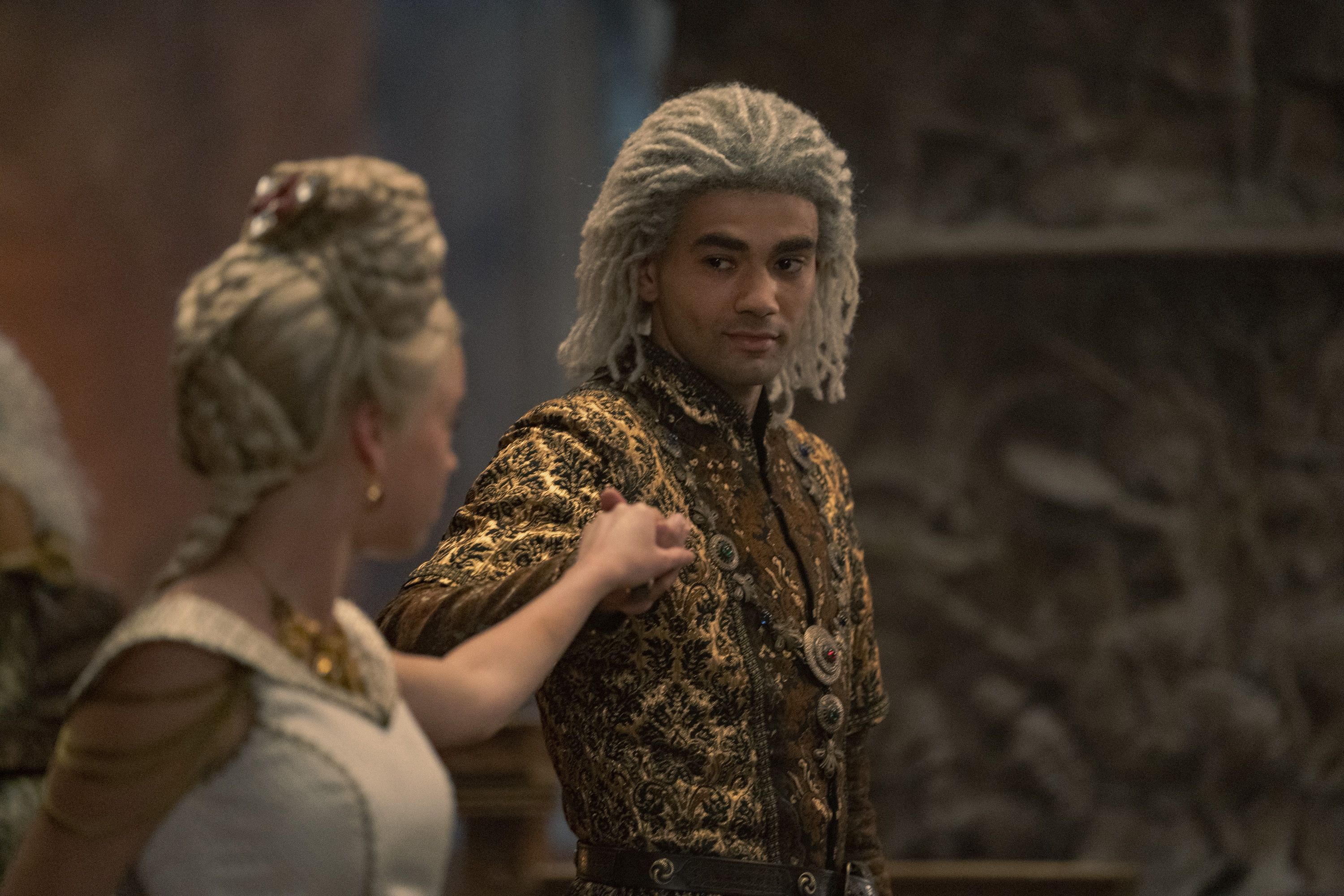 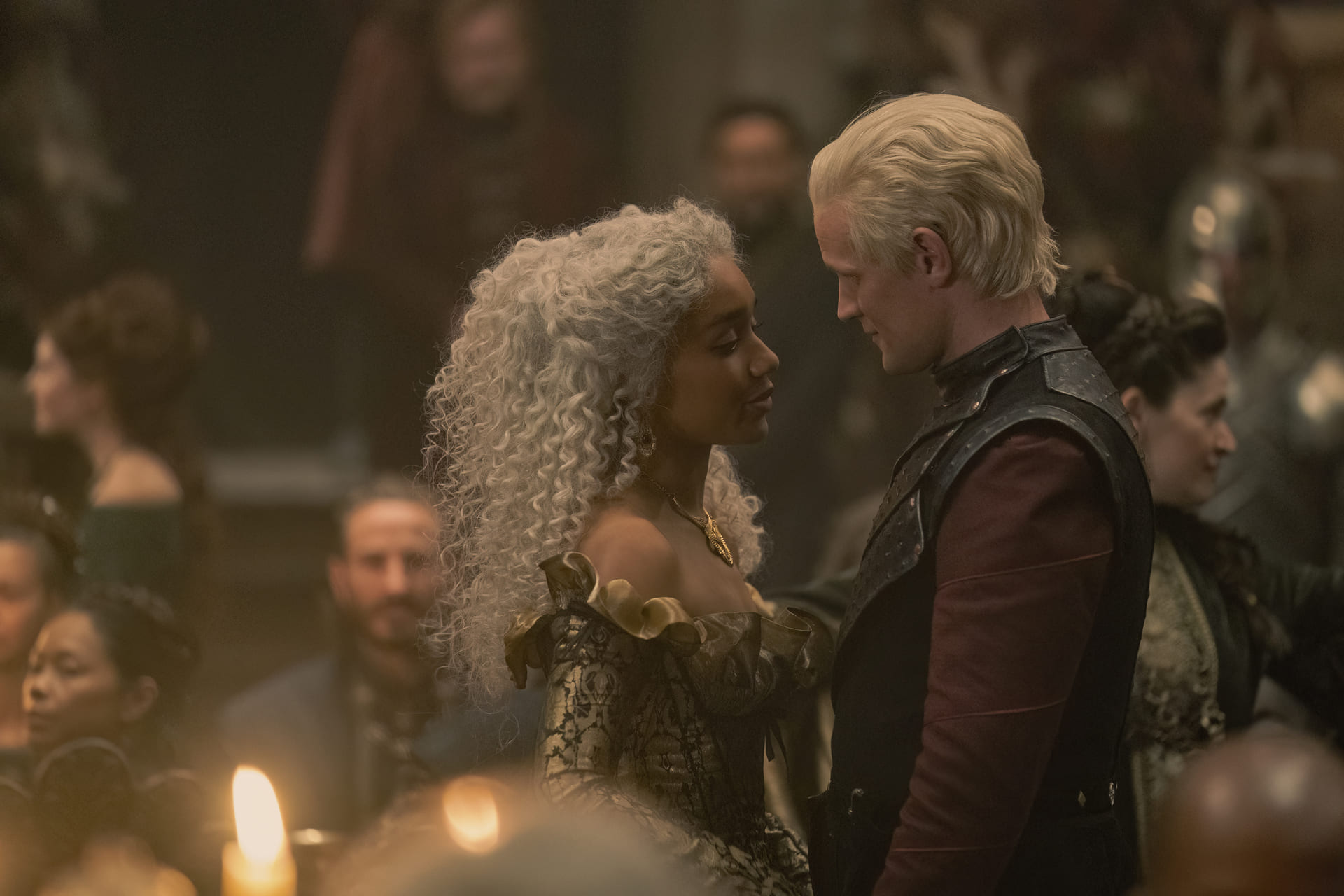 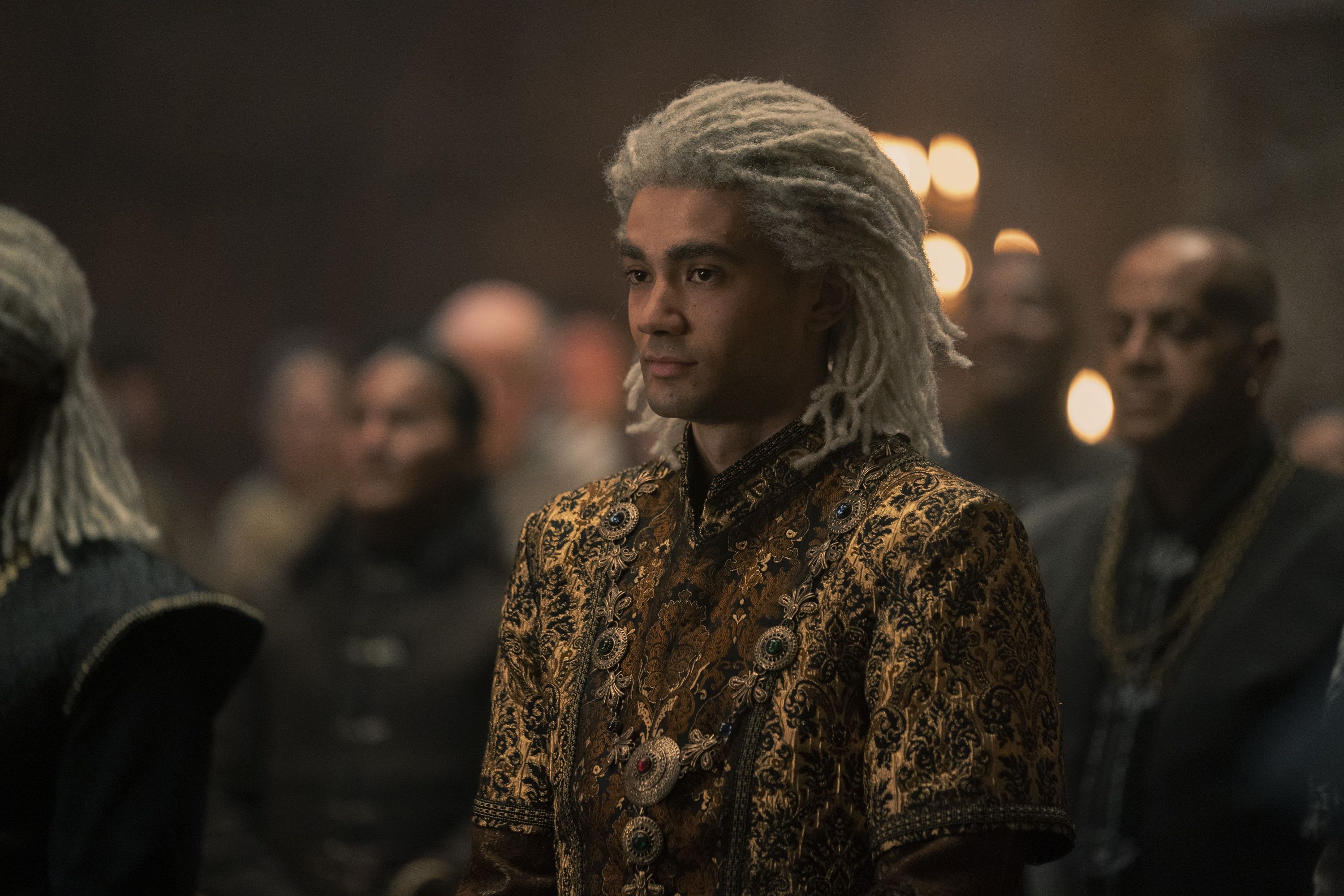 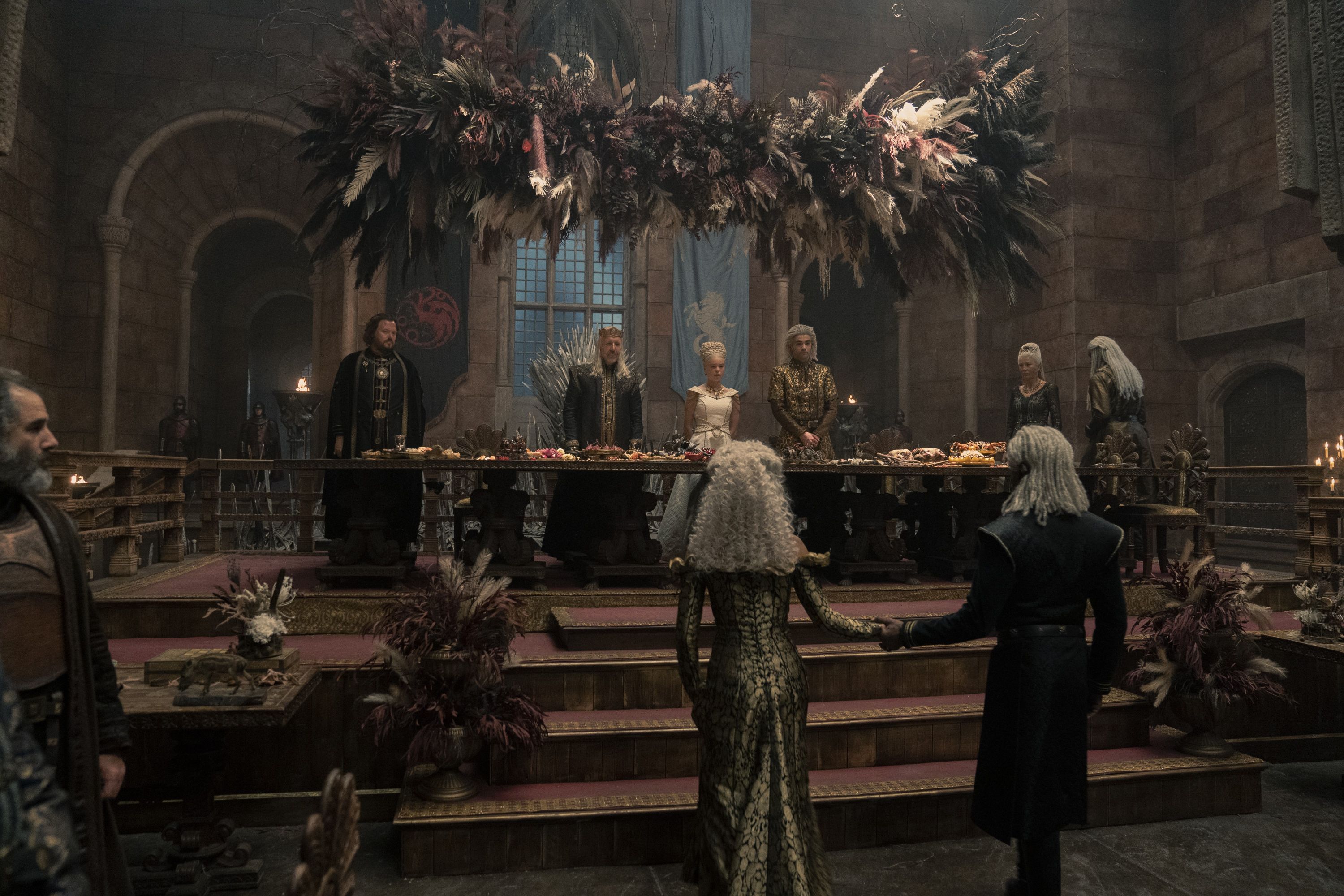 House Velaryon enters and it’s interesting to see them incorporating more gold and richer, warmer colors into their clothing. At the beginning of the series, they were mostly in the cooler tones of blues and browns, but they arrive to the wedding as a family that is ready to re-ascend. They are celebrating their positions, with Laenor and Laena wrapped in gold as if they are prizes. 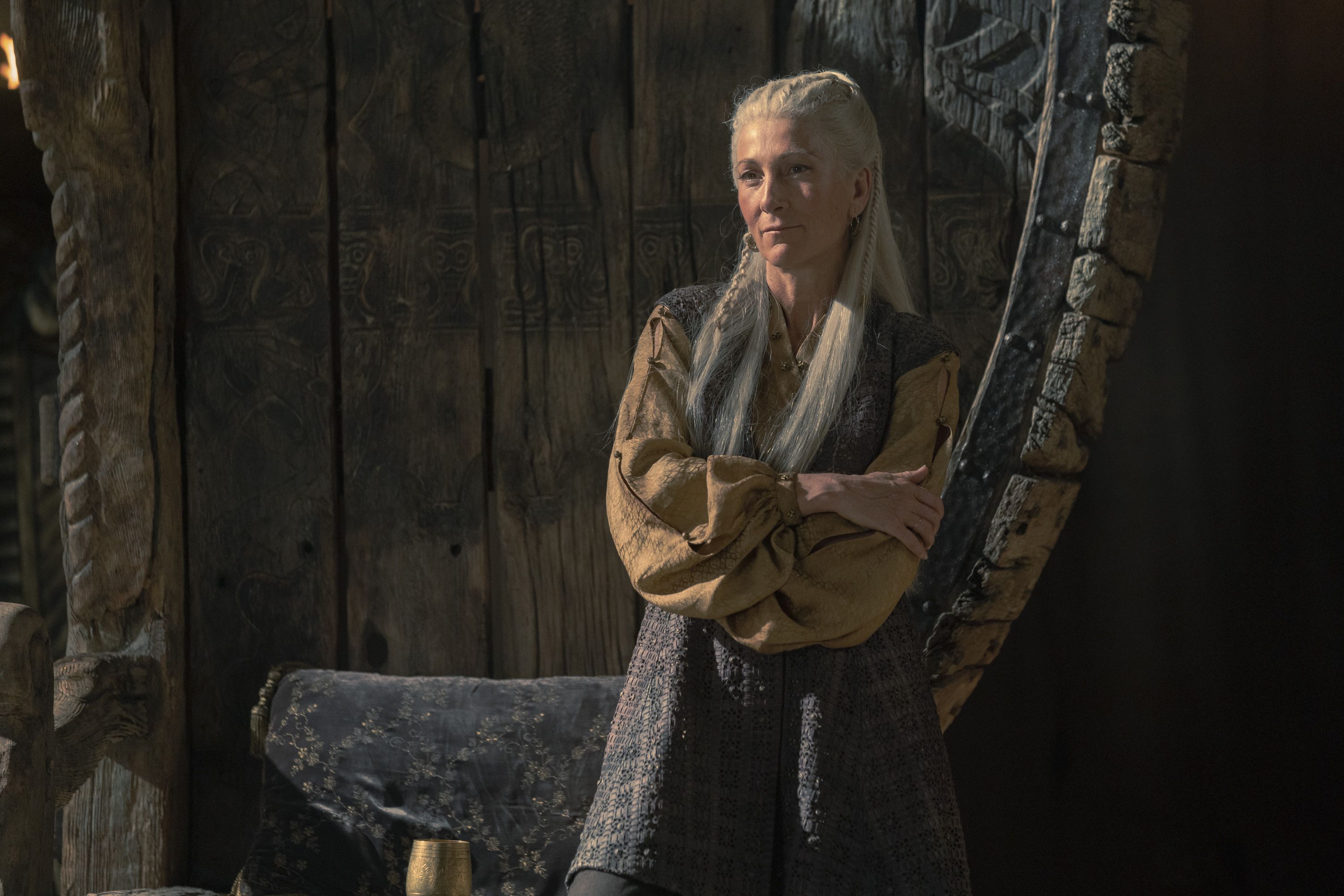 Special shoutout to Rhaenys’ everyday gold pirate garb a few scenes prior. She seems so much more comfortable here than in the trappings of courtly dresses. 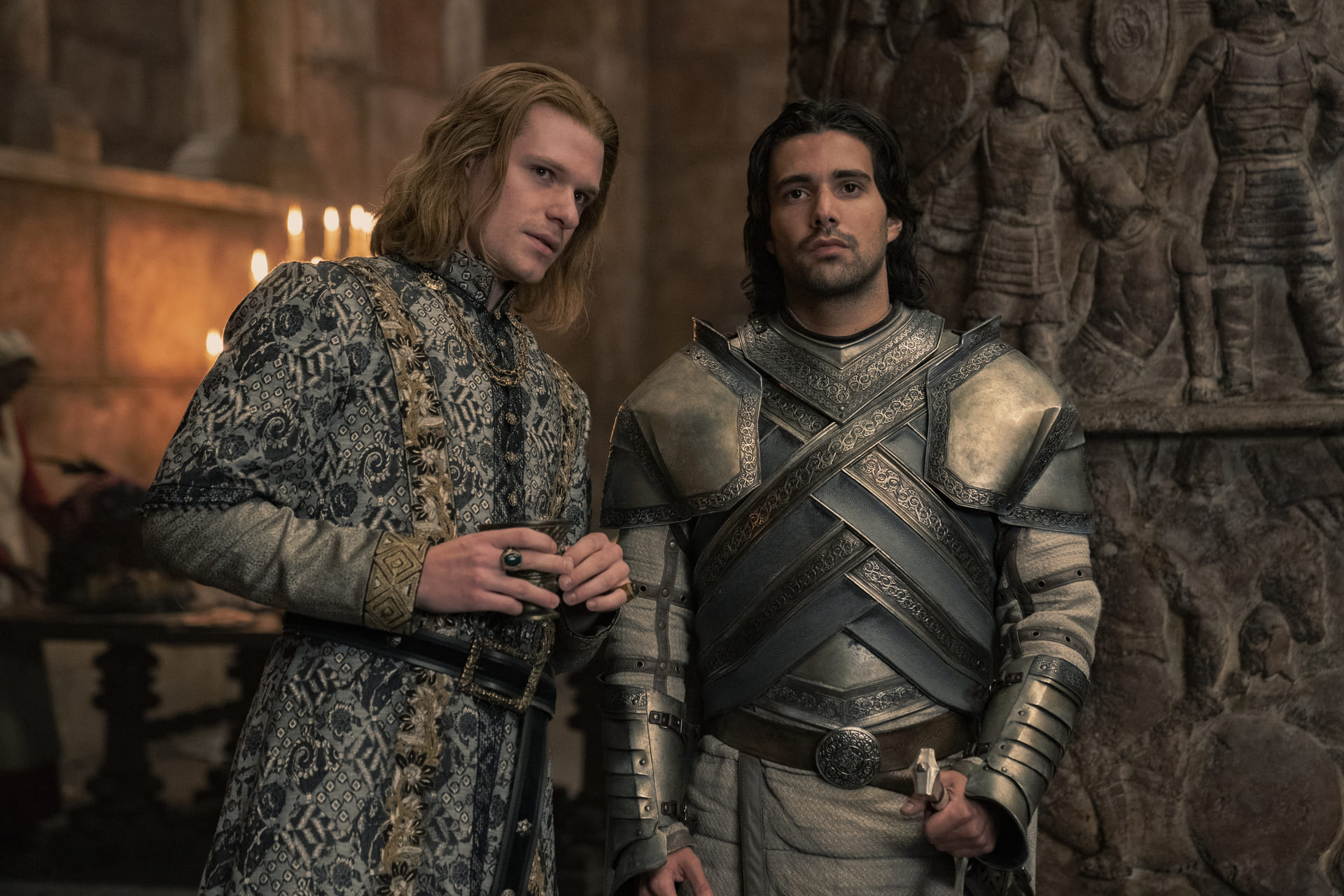 I do love the side-by-side of Joffrey and Criston. Joffrey’s brocade is rich and layered while Criston is in armored uniform. Both are in the same position with their lovers, but Joffrey’s outfit underlines his courtly manipulations, and Criston’s armor symbolizes the brute strength that eventually beats (literally) Joffrey’s machinations. 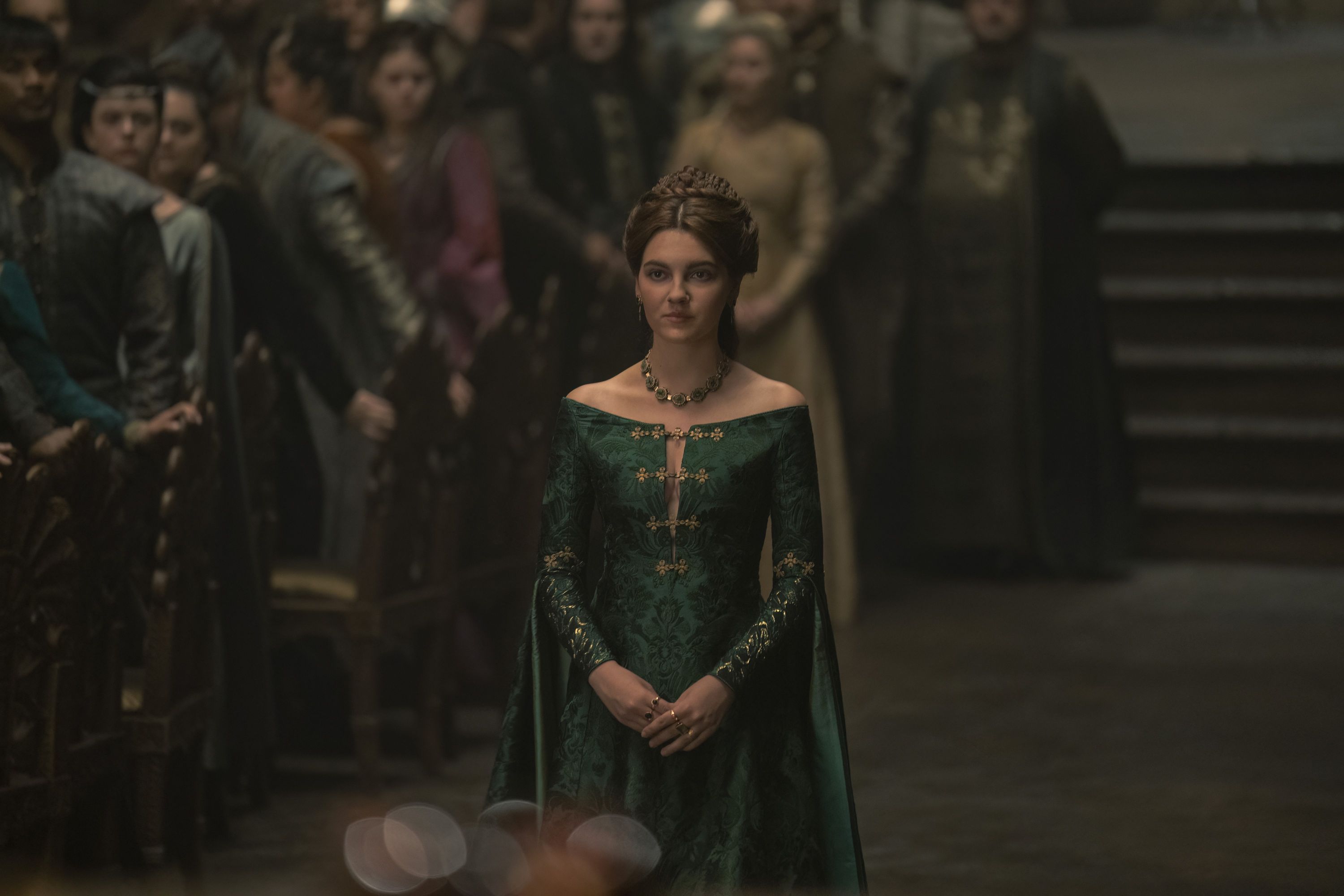 Finally we get to the mic drop in clothing form. After being betrayed by her best friend/step-daughter, she shows up to her best friend/step-daughter’s wedding in green, which we hear is the Hightower color for war. The way she enters evokes that green light beacon amidst a sea of possible enemies. It’s a fairly simple dress design, but is meant to let the color do the heavy lifting. She has thrown down the gauntlet in the most public way possible and is ready for the battles to come.