Game of Thrones Season 8 Episode 5 “The Bells” Written Recap Round-Up | Watchers on the Wall | A Game of Thrones Community for Breaking News, Casting, and Commentary 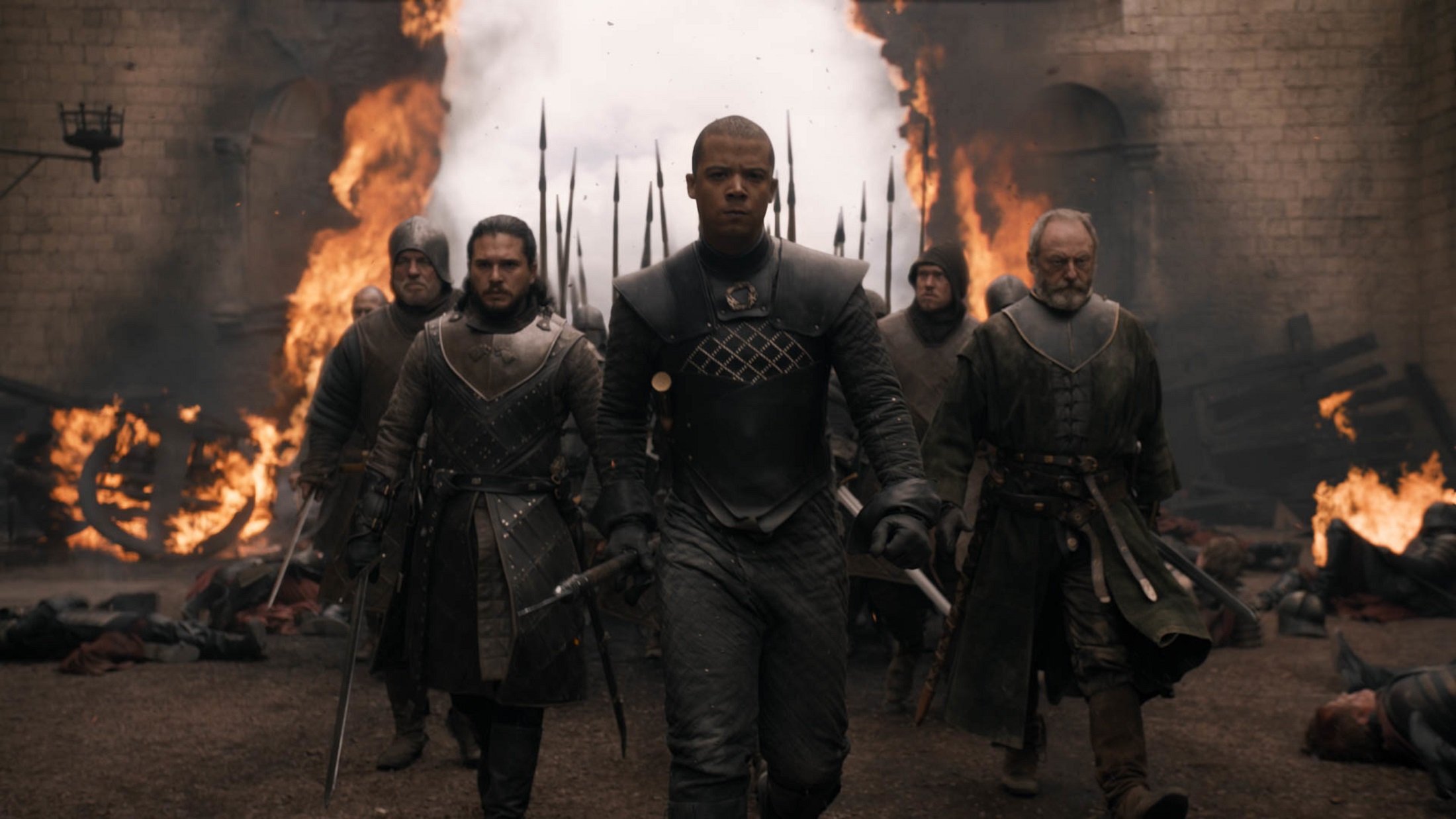 Just when you thought last week’s episode of Game of Thrones was contentious, along comes “The Bells”, to barrel down your door (see picture above), divide your friends, and perhaps even align you with some of your enemies. Every Facebook and Twitter this side of the Narrow Sea has thoughts and opinions about our favorite show’s penultimate episode. But I’m not here to talk about your cousin Peter who thought the episode was “cool because the dragon lady burned stuff.” I’m not here to talk about your friend Sarah who thinks it was terrible because “it was too long and violent.” I’m also not here to talk about your Great Aunt Sally, who wants to know if you DVRed that great Hallmark movie that aired last night. No, friends, I’m here to gather up the critics’ thoughts and see what they thought about the decimation of King’s Landing. And whoa boy, did they have some THOUGHTS. And FEELINGS.

Here at Watchers on the Wall, we encourage you to ‘Always Support the Bottom.’ This extends to your support of our editor-in-chief Sue the Fury, in which her background knowledge of the books informs her perspective on the episode, so please go check it out when you get a chance! Once you’ve done that, you would do well to support our peerless Oz of Thrones’s ‘Unsullied recap,’ in which his fearless determination to avoid reading the books has outlasted all others, continuing on for 8 full seasons. After this, you can check out what these Internet critics thought of “The Bells”:

Alan Sepinwall, Rolling Stone – In which the script races through Dany’s transition, piling one personality-altering event on top of the next so that none of them gets to breathe.

Alex McLevy, The A. V. Club – In which this episode was a refreshing tonic to the sometimes conservative mode of traditional heroics Benioff and Weiss have been dishing up this season.

Alyssa Rosenberg, The Washington Post – In which Game of Thrones and A Song of Ice and Fire novels have always been about family, and such, the final season, and this episode in particular, are hitting many, many high marks.

Amanda Marcotte, Salon – In which the fans simply aren’t paying attention because the show has spent 8 seasons signaling the ways that war makes monsters out of people and that Daenerys in particular has a deep capacity for cruelty that is only checked when her ego is being sufficiently fed.

Daniel D’Addario, Variety – In which Daenerys’s decision doesn’t need to be sympathetic, however — just legible to the viewer, which this viewer ultimately found it to be and which others, he suspects, will not.

Dave Gonzales, Thrillist – In which Arya’s arc makes sense as a way to anchor point-of-view, but doesn’t add anything to last week’s lingering questions of what Arya’s ultimate motivations are, other than killing Cersei, which she doesn’t get to do.

David Rosenblatt, Squinty Overanalyzes Things – In which I (yes, me of me, fame) explain why my expectations have long been tempered, and people should have been this angry years ago as opposed to now, because this is more or less always how it was going to be given those long ago decisions.

Hillary Kelly, Vulture – In which it stands out as massively uneven, brilliant in moments, but often abysmally fan service-y.

Ian Thomas Malone, Personal Blog – In which the best scenes involve the random soldiers trying to stop Arya, The Hound, and Tyrion because as as larger than life the show feels in so many ways, it also tends to only focus on a handful of people in this big world, making it quite easy to forget that there’s all these other people in the realm, just trying to get by.

James Hibberd, Entertainment Weekly – In which if pushed to nitpick, then he’d say that he wished season 8 had more episodes to play Dany’s arc out a bit longer, but also knows the production gave the final season everything they had given the level of production required to pull off its battle sequences.

Jeremy Egner, New York Times – In which it was a thrilling, horrifying, and ultimately frustrating episode, which feels weird to say because it was often amazing to behold and reflected some of the show’s most central themes, but ultimately hinged on a turn that rang hollow — specifically the heel turn mentioned above.

Joanna Robinson, Vanity Fair – In which it would have been nice to have seen Daenerys talk with Missandei about, say, the death of her dragons, or the loneliness and isolation she was feeling in Westeros instead of being told, rather than shown, that Jorah and Missandei mattered to Daenerys.

Julia Alexander, The Verge – In which it fell into the category of “dumb entertainment,” and that’s not a bad thing — but it’s a lot to unpack.

Kathryn VanArendonk, Vulture – In which GOT may have gotten the “right” answer — that Daenerys would go mad, that this was always her destiny — but without a richer exploration of Dany’s internal life, the series failed to show us the work that got it there.

Kelly Lawler, USA Today – In which maybe some fans can hold out hope that the finale can wrap things up in a way that makes emotional and logical sense, but betting on GOT to fix itself is really just doing the same thing over and over again, and expecting a different result.

Laura Hudson, WIRED – In which Dany’s transformation from ruthless but compassionate wheel-breaker to videogame supervillain took place over the course of maybe two episodes, because in the absence of enough runway to demonstrate a gradual descent into mental illness, Dany has to simply snap—to experience a break so traumatic that it explains a heel turn into mass slaughter.

Laura Stone, Hey Don’t Judge Me – In which Euron isn’t worthy of this battle, he’s a piece of shit walking dick pic, a usurper and a bit of human trash, and it isn’t clear who won, dammit.

Lauren Sarner, New York Post – In which no one is safe going into next week’s series finale.

Lindsey Romain, Nerdist – In which The Hound was the MVP of the episode.

Mark Perigard, Boston Herald – In which the destruction of King’s Landing was one of the best and most terrifying in the series’ history.

Michael Schick, Hypable – In which as the culmination of eight seasons of so many emotional journeys — the story of Jaime and Cersei, the story of Sandor Clegane, the story of Daenerys Targaryen and her sanity — the episode crumples, feeling almost divorced from much of the work that came before it, or as though the audience is expected to write in crucial information that has been either forgotten or ignored.

Michael Rogeau, Gamespot – In which the fight between Sandor and Gregor actually lived up to the hype, was perfect and much-needed, considering where several other character arcs wound up in the end.

Mike Bloom, Parade – In which the Battle of King’s Landing is reported in the Westeros World News.

Rob Bricken, io9 – In which Cersei’s final moments should have been bigger—not with a grander or more exciting death, but something more emotionally powerful as she realized that her destruction was of her own doing.

Ron Hogan, Den of Geek – In which it’s fair to blame (showrunners) David Benioff and Dan Weiss for the change in the show’s tone, but it’s unfair to blame them at the same point.

Sarah Hughes, The Guardian – In which it was a triumph of spectacle over depth.

Sean T. Collins, Rolling Stone – In which it’s the Red Wedding writ large, a masterpiece that murders all hope of neat closure, and reduces any lingering belief in the redemptive power of violence to ashes in our mouths.

Todd VanDerWerff, Vox – In which he looks at the four winners and ten losers of the episode.

Tori Preston, Pajiba – In which the decision to continuously cut to Cersei, standing in her tower and watching her city get sacked, worked because Lena Headey sold the hell out of it, changing her expression slowly from cool, detached wariness to abject fear.

Verne Gay, Newsday – In which Cersei may have deserved her fate, but also made this series better — and indisputably richer — by her presence.