Game of Thrones Season 5 Blu-ray Review and Giveaway! | Watchers on the Wall | A Game of Thrones Community for Breaking News, Casting, and Commentary 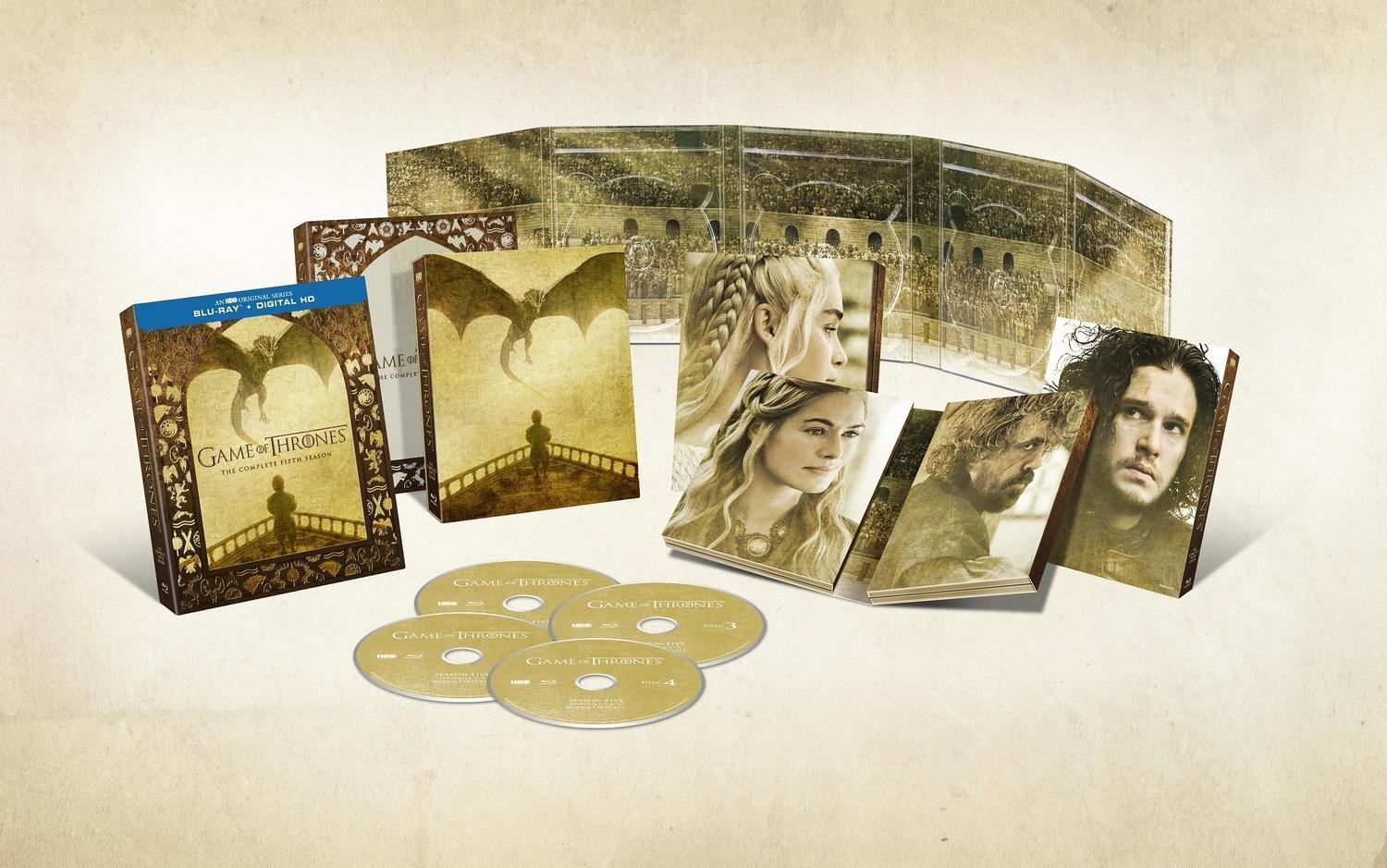 The Game of Thrones Season 5 Blu-ray is coming to retailers everywhere in just a few days, and luckily we got our hands on a copy! So today, we’re going to take a thorough look at the newest edition to our home collection, and then- here’s the really fun part- we’re going to have a giveaway!

That’s right- while everyone else will have to wait until March 15th to buy the DVD or Blu-ray, one of you readers will win Game of Thrones: The Complete Fifth Season on Blu-ray!

But before we get to the giveaway, let’s open up that Blu-ray set and have a look!

First off, speaking strictly of aesthetics, this is a gorgeous set. One of my concerns about the key art for season 5 was that Tyrion & dragon artwork, while a strong image to tease the season, didn’t do much for me after the fact. For the home release, the art has been tweaked slightly, with a golden wash to the layout of the 4-disc boxset and the cover itself. The sleeve over the box is covered with detailed house sigils that give it more weight in theme.

The Blu-ray sets contains several nice bonus features. There are four deleted scenes– to be completely honest, I wasn’t bowled over by any of them, and I understand why they all were cut. There are In-Episode Guides for those who find them useful- I think those are more for casual fans than the likes of us hardcore GoT nerds.

The Histories and Lore featurettes are the real treat of the boxset and what make the Game of Thrones Blu-ray set worth every penny. The beautifully animated series of histories include a variety of drawing styles, and a lengthy list of topics. A complete list of the Histories & Lore can be found in this post, along with an exclusive look at one featurette video, “The Many-Faced God.” 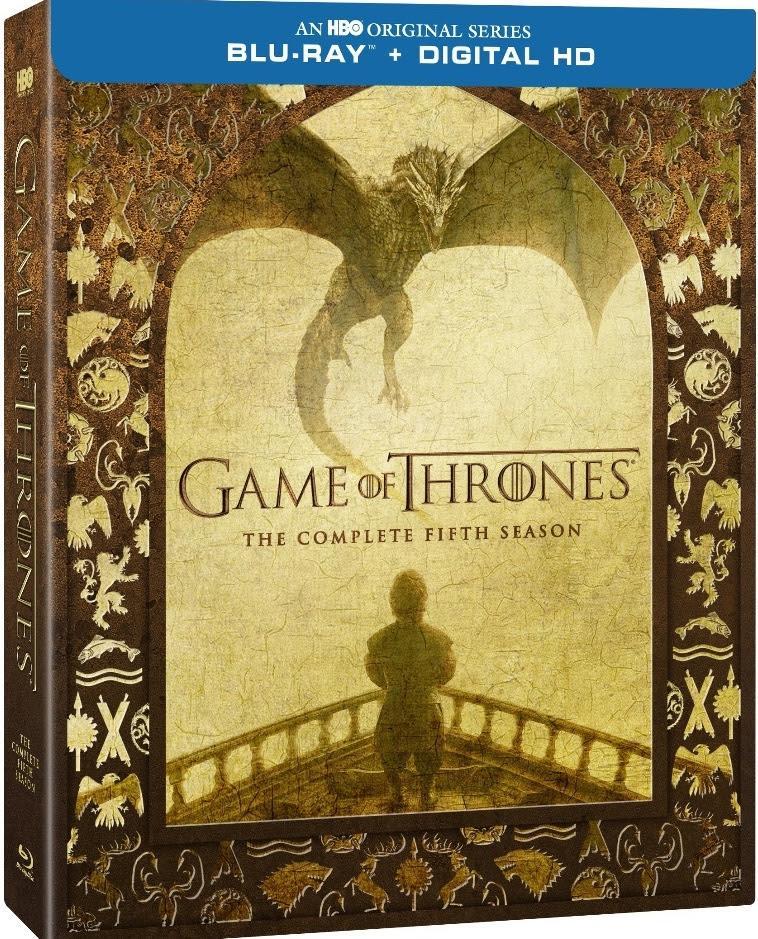 A 20-minute animated history feature is includedm titled “The Dance of Dragons,” telling the story of the Targaryen civil war that led to the destruction of the family and their dragons. The feature is narrated by several past cast members, including Harry Lloyd (Viserys), Kerry Ingram (Shireen), Pedro Pascal (Oberyn), and more. This is an amazing bonus feature. I really am so impressed with the care that went into producing something of this quality for a home release.

The Blu-ray includes other extras such as an Anatomy of an Episode video for “Mother’s Mercy”, “The Real History Behind Game of Thrones” , the new character and locations videos we saw before season 5, and “A Day in the Life,” the video that aired last year showing the behind the scenes process of producing the show in three countries.

What’s striking about the audio commentary tracks is how comfortable and organic the groupings are. The Game of Thrones cast and crew are good about keeping the discussion on topic, pertinent to the scenes and characters we’re watching, while still cracking jokes and sharing more personal thoughts on the work they’ve done. More than a few times, I noticed the actors asking questions of their directors, prompting them to open up, rather than actors dominating the discussion with purposeless rambling as I’ve come across on other shows’ DVDs before.

My one issue with the commentaries is minor- that there isn’t one for episode 7. For a Blu-ray set this well-produced with so many tracks, it irks my sense of completion. There doesn’t seem to be any good reason to have three tracks for “Hardhome” but none for “The Gift.”

One thing I found interesting was how the actors convey how friendly they are with one another, and yet there are moments like during “The Dance of Dragons,” when Peter Dinklage notes during the Martell group scene at in Dorne, “I have never met three of the people sitting in this room.” You forget sometimes with a cast this huge, some people’s paths never cross. Dinklage notes on the commentary he’s probably met the widest range of people in the cast, due to his character moving between The Wall, King’s Landing and across Essos.

Dinklage was probably my favorite commentator (along with Lena Headey, who is awesome covering “Mother’s Mercy”), with his dry low-key humor, warmth and intelligence. He derails the Martell scene discussion by observing, “The problem with Nikolaj is he’s not handsome enough.” It only gets better from there.

There are other fascinating high points in the season, discussion-wise. The touchy subject of the final scene of “Unbowed, Unbent, Unbroken” is carefully addressed by Bryan Cogman; quotes were published in February by EW.

Between the extras, the amazing sound and visuals on the Blu-ray and the pleasure of rewatching the season, I can happily say the Game of Thrones Season 5 Blu-ray was worth the wait.

Today, we have a Game of Thrones: The Complete Fifth Season Blu-ray box set to give away to one lucky fan. Just in time for a rewatch before season 6!

**Because this is a Blu-ray, it has a Region code, in this case Region A. Please only enter the giveaway if you’re able to use Region A Blu-rays.**

Beyond that request, we’re happy to ship worldwide.

Entries are accepted for 48 hours, until 6PM ET, on March 13th, 2016. The winner will be randomly selected and announced shortly thereafter on Sunday.