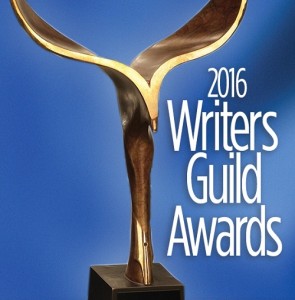 Awards season is continuing nicely for Game of Thrones this year!

Today via press release, the Writers Guild of America officially announced nominations for their 2016 television awards. The WGA Awards will celebrate “outstanding achievement in television, new media, news, radio, and promotional writing during 2015.”

The awards ceremony will take place on Saturday, February 13th.

Game of Thrones is competing in two categories: Drama Series, and Episodic Drama, which recognizes specific episodes. The season 5 finale “Mother’s Mercy,” written by David Benioff and D.B. Weiss, is representing GoT in the category.

The nominations, and the competition:

The competing shows are extremely strong this year, so I don’t think Game of Thrones is a shoo-in to win. However, bad pussy aside, “Mother’s Mercy” did win the Emmy for Writing and the show does have a shot at it.

Congratulations on the nominations to all the writing staff of Game of Thrones! We’ll be rooting for you.