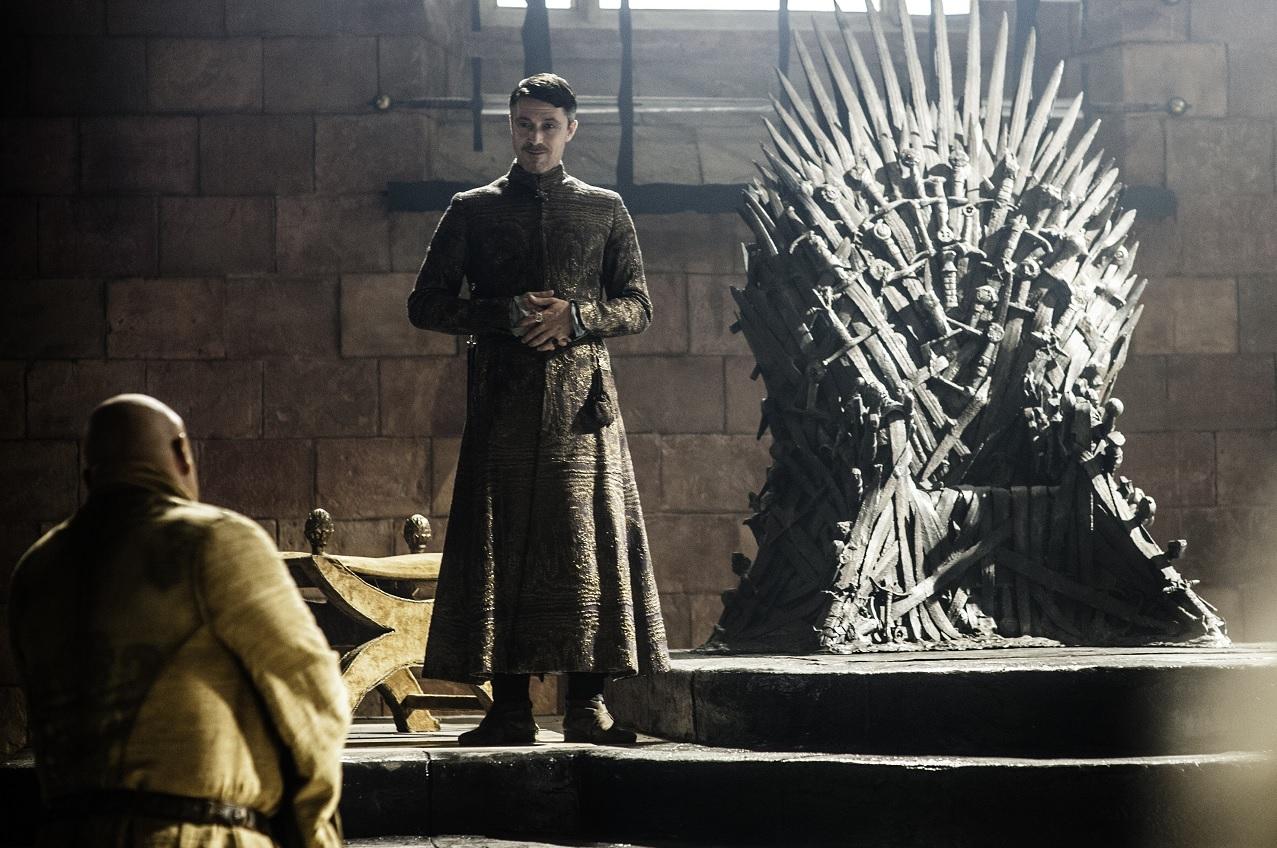 “Chaos is a ladder,” and sooner or later someone falls. In today’s #GoT50 countdown rewatch episode, Game of Thrones set the course for the rest of the season and said goodbye to Ros, an entirely original creation for the pilot who became a long-running character. Here to take us down Memory Lane for “The Climb” is Paige, aka GameOverRos!

On today’s walk down memory lane, it’s the turn of “The Climb.” Written by David Benioff and D.B. Weiss, and directed by Alik Sakharov, this episode is a slower pace after the rollercoaster that was “Kissed by Fire.” The pieces begin to move into place for two memorable weddings, Theon continues his evolution into Reek, and the wildlings ascend the Wall.

We open beyond the Wall, with Gilly, Sam, and Chekhov’s Dragonglass for the first of several short expositional scenes. Their discussion about how high and imposing the Wall is proves a nice tension builder for the later climb. Then it’s over to Bran, Jojen and friends for a stand-off at High Noon between the ladies, and a vision from Jojen. This scene emphasises just how weak Jojen is, especially in comparison to Bran. He suffers for his visions in a way that we have never seen Bran do. He never stood a chance. 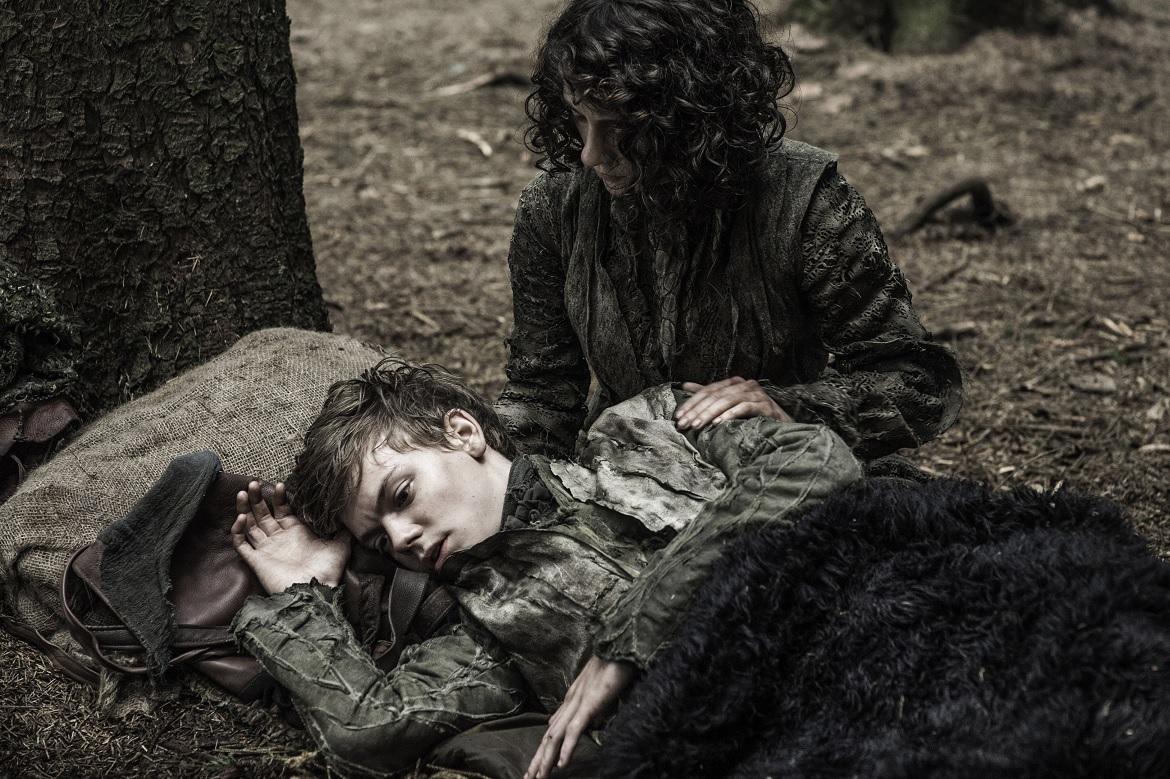 Meanwhile, the wildlings prepare for their climb. Ygritte admits that she knows Jon is still a crow, but it doesn’t matter as long as he’s loyal to her. You just know this can’t end well. As Ramsay says later, “If you think this has a happy ending, you haven’t been paying attention.” But you can’t help but hope that maybe, just maybe, these two will make it. Unfortunately, Westeros isn’t a fairy tale – something this episode reinforces.

It’s over to the Riverlands next, for a somewhat divisive scene. As Arya trains with Anguy, a familiar figure appears: Melisandre. As readers were quick to point out, Melisandre was nowhere near the Riverlands in the books. She had no reason to be there. Even now, there is the question of why she was there. The Lord of Light requires something the Brotherhood have, she says.

Yet we haven’t seen Gendry for almost three seasons. He’s off there, rowing the SS Abandoned Plotlines with the rest of the Brotherhood. Melisandre had zero reason to be there. 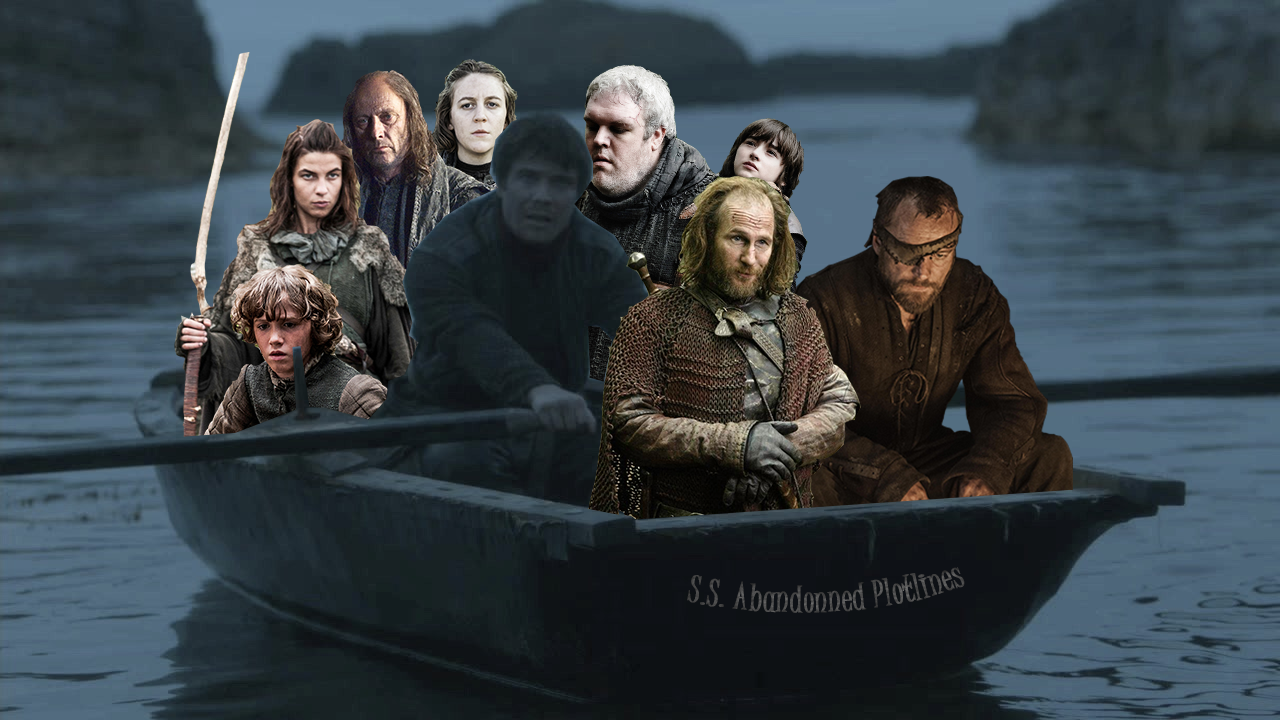 Or did she? Gendry may have been the excuse, but he certainly wasn’t alone in being someone who could provide a use for Melisandre. Who? Why, hello there Beric Dondarrion. In Beric, we have a man brought back to life by Thoros and the Lord of Light. We saw it happen. Melisandre sees his scars. She sees proof that the dead can rise again due to the power of R’hllor. But why would she need to know that? Why would we have to see that she knows that? I don’t know. If only she happened to be somewhere when someone needed resurrecting…

Back to the Wall, Jon Snow is starting his climb. He slips for a moment, but hangs on. Hey, isn’t it odd that we see Jon just after Melisandre finds out that R’hllor brings people back from the dead? Nah, HBO told us that he was dead after season 5– not mostly dead, but totally dead. Why would they lie to us?

It’s at this point that I look away from the screen. I completely support the decision to show the brutality of Ramsay Snow, and Theon’s slow, painful transformation into Reek. But I can’t watch it. Ramsay doesn’t just torture and flay, he plays mind games. Here, we have a villain who is smarter than Joffrey, and more brutal than any other we’ve seen. He’s evil on a whole different scale, which has me cowering behind a cushion until it’s over. 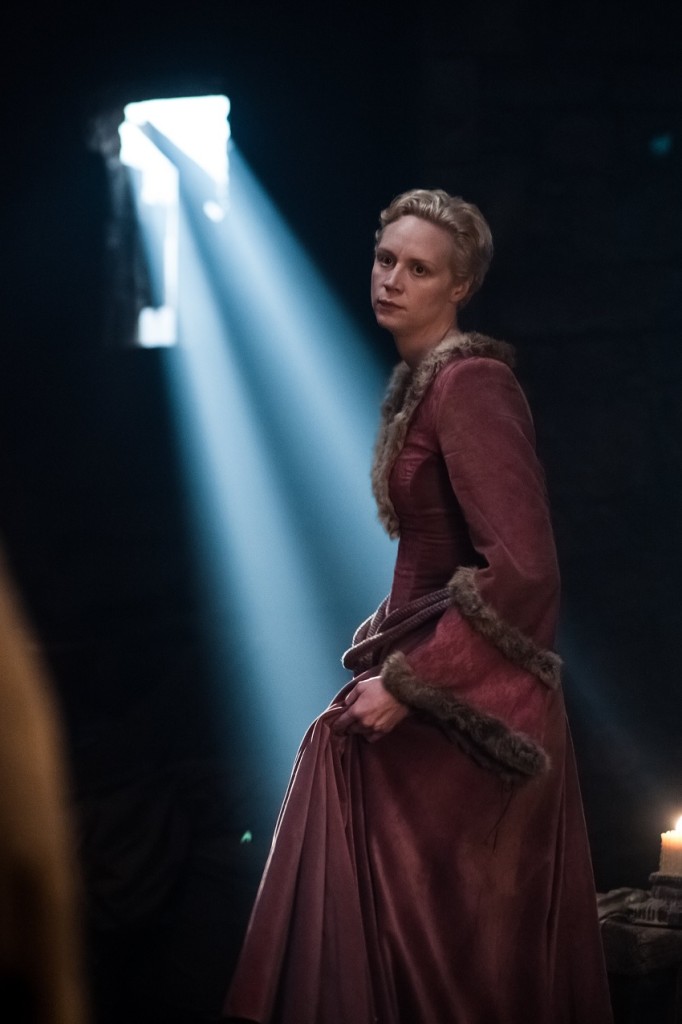 Over at the Twins, the Freys want major compensation for King Robb’s insult: an apology, Harrenhal- and a wedding. Does anyone else hear drums?

Just a little off-topic here, but the juxtaposition of scenes in this episode is fantastic. Cutting from Ramsay to the Freys, then over to Roose. It’s barely noticeable on first viewing. Yet now, it feels like a big red warning sign.

Speaking of Roose, he’s at Harrenhal with Jaime and Brienne. Jaime is told he can return to King’s Landing, but without Brienne. She aided treason, so she has to stay put. It’s a short scene that nicely shows how far Jaime has fallen without his hand, while setting up the next episode.

In King’s Landing, it’s time for the Clash of the Titans. In the green corner, we have Olenna “Queen of Thorns, Say No to Pricks’” Tyrell. In the red corner, Tywin “Rains of Castamere, My Children Are Screwed Up Because of Me” Lannister. 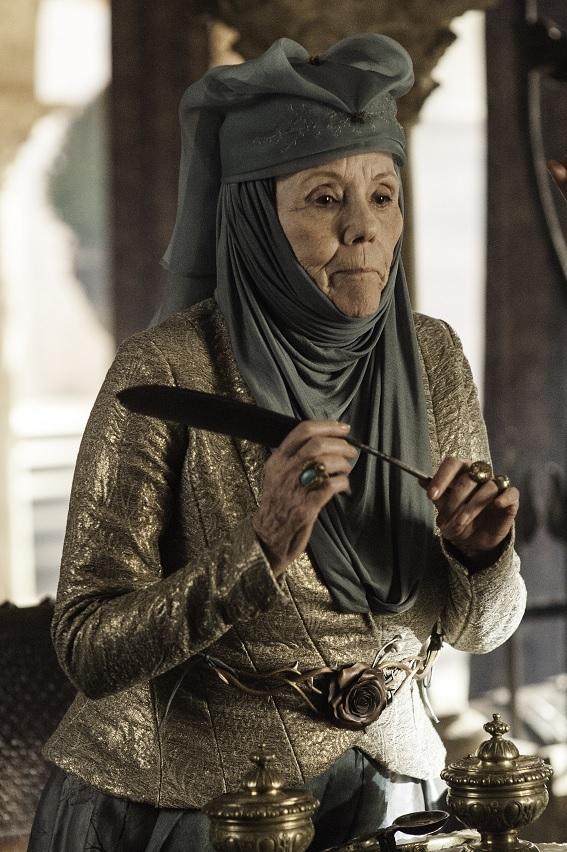 Excuse me a moment to fangirl about this scene. Here, we have two of the greatest minds in Westeros, two of the finest British actors, verbally sparring. It’s my favourite scene in the episode, possibly of the season. Tywin wants to marry Cersei to Loras. Olenna hates the idea. Neither wants to give a single inch. Insults and sparks fly. It’s funny, it’s clever, and I adore it. Even the scene end is perfect, displaying how much respect Olenna has for Tywin, even if she dislikes that he ‘won’ this fight. Anyone less elegant than the Queen of Thorns would have told him to shove his quill up his bottom. She simply breaks it. Pure class. If it were up to me, Olenna would be Queen of the Seven Kingdoms. Forget your dragons, forget your direwolves. She’s sharper than any Valyrian sword.

Returning to the Wall, to remind us what this episode is about. Terror. Tension. Jon and Ygritte almost falling. Miraculously, they hang on. Will they make it? Won’t they? Well, unless Olly is around, I think they’re safe. 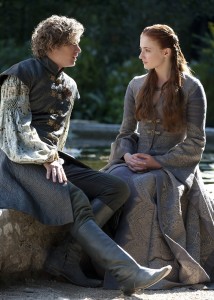 Back to King’s Landing, and Sansa Stark is far, far too happy. This cannot stand. Wait. Did Loras just say “FRENCH” sleeves? There is no France in Westeros. Well, maybe you could say Highgarden is the France of Westeros, but not the point. Hashtag SleeveGate. Okay, he didn’t actually say “French,” but what is an episode of Thrones without at least three things to cause you to smash your keyboard?

In the scene, Sansa and Loras talk about their upcoming wedding. It’s quite awkward, not least when Sansa realises why Loras is talking so excitedly about clothes. But, hey, it could be worse. They find mutual understanding in their shared hate for King’s Landing. It’s almost story book. A beautiful lady and a handsome knight get married, have beautiful babies, and live happily ever after. Anywhere else, that would be how it works. Not in Westeros.

Tyrion and Cersei are watching this. For the first time, they seem almost normal as they commiserate and discuss who got the worse end of the deal. There isn’t any fight left in them. In their shared honesty, Tyrion asks if Cersei tried to have him killed. No, she didn’t. Let’s face it, if Cersei wanted him dead, she would have found a way. She isn’t exactly a woman who does things by halves. In an episode often described as filler, this is another underrated, brilliant scene. What could have been if the two had found mutual ground, and stopped the familial war. 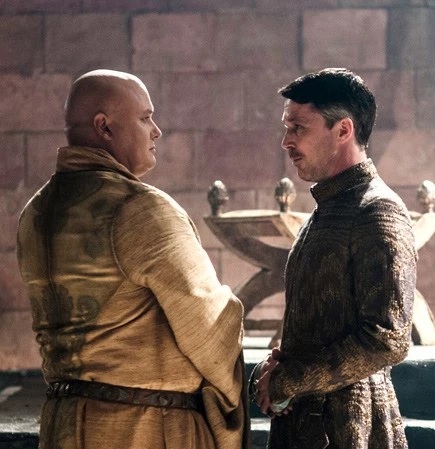 Littlefinger is gazing at the Iron Throne when Varys enters. The rivalry between the two men is certainly amongst the best things invented for the show. They’re both so well matched, it’s often hard to decide who comes out as the winner in their encounters. Not so in this one. Littlefinger reveals that it was he who thwarted Varys’ plans to give Sansa to the Tyrells.

To add insult to injury, he also gave Varys’ “confidant” to a “friend” of his. Cue the Shakespearean villain’s speech: “Chaos is a ladder.”

As Littlefinger talks, we see King Joffrey looking at something: the corpse of Ros. Meanwhile, Sansa cries as she watches Baelish’s ship depart, leaving her to King’s Landing and an unwanted wedding to Tyrion Lannister.

At the Wall, Jon and Ygritte have finally reached the top. Their climb is over. An eagle flies across the sky, as the two kiss in a perfect cinematic ending.

Lothar Frey, played by Tom Brooke, and Black Walder Rivers, played by Tim Plester, make their debuts. We shall see them again, playing key roles in a certain wedding.

Brienne’s pink dress. I’m convinced Gwendoline Christie could wear a paper bag and look elegant, and she is no exception in this dress. 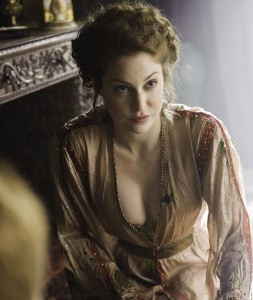 There is just one death in “The Climb.”  Ros, given as a gift to King Joffrey for “target practice,” was the most personal to me. Ros was a polarising, often controversial character. She was hated in as much measure as she was liked. Both often for the wrong reasons.

But I adore her. Granted, I’m biased. I’ve been “playing” Ros on Twitter for four years now. I often like to say that having her as my alter ego has made me brave. But she deserved so much better than she got. She didn’t need a Hollywood ending- just something better. Away from King’s Landing, somewhere where she would be treated with some respect, as opposed to a “series of profitable holes.” No such luck. Hers, like her fire, ran out far too quickly.

Melisandre [to Arya]: I see darkness in you. In that darkness, eyes staring back at me. Brown eyes, blue eyes, green eyes. Eyes you’ll shut forever. We will meet again.

Maisie Williams recently posted the above quote on Instagram. Melisandre saw her becoming No One. With the rumours of Arya returning to Westeros, there’s the question of when and where they shall meet again.

Littlefinger: Chaos isn’t a pit. Chaos is a ladder. Many who try to climb it fail and never get to try again. The fall breaks them. And some, are given a chance to climb. They refuse, they cling to the realm or the gods or love. Illusions. Only the ladder is real. The climb is all there is.

Littlefinger does Shakespeare villain while providing the reason for the episode title. The Wall seems almost secondary in comparison.

Olenna: A sword swallower through and through.

Olenna: Old. I’m something of an expert on the subject.

Ladies and gentlemen, the one true Queen of Westeros – the Queen of Thorns. 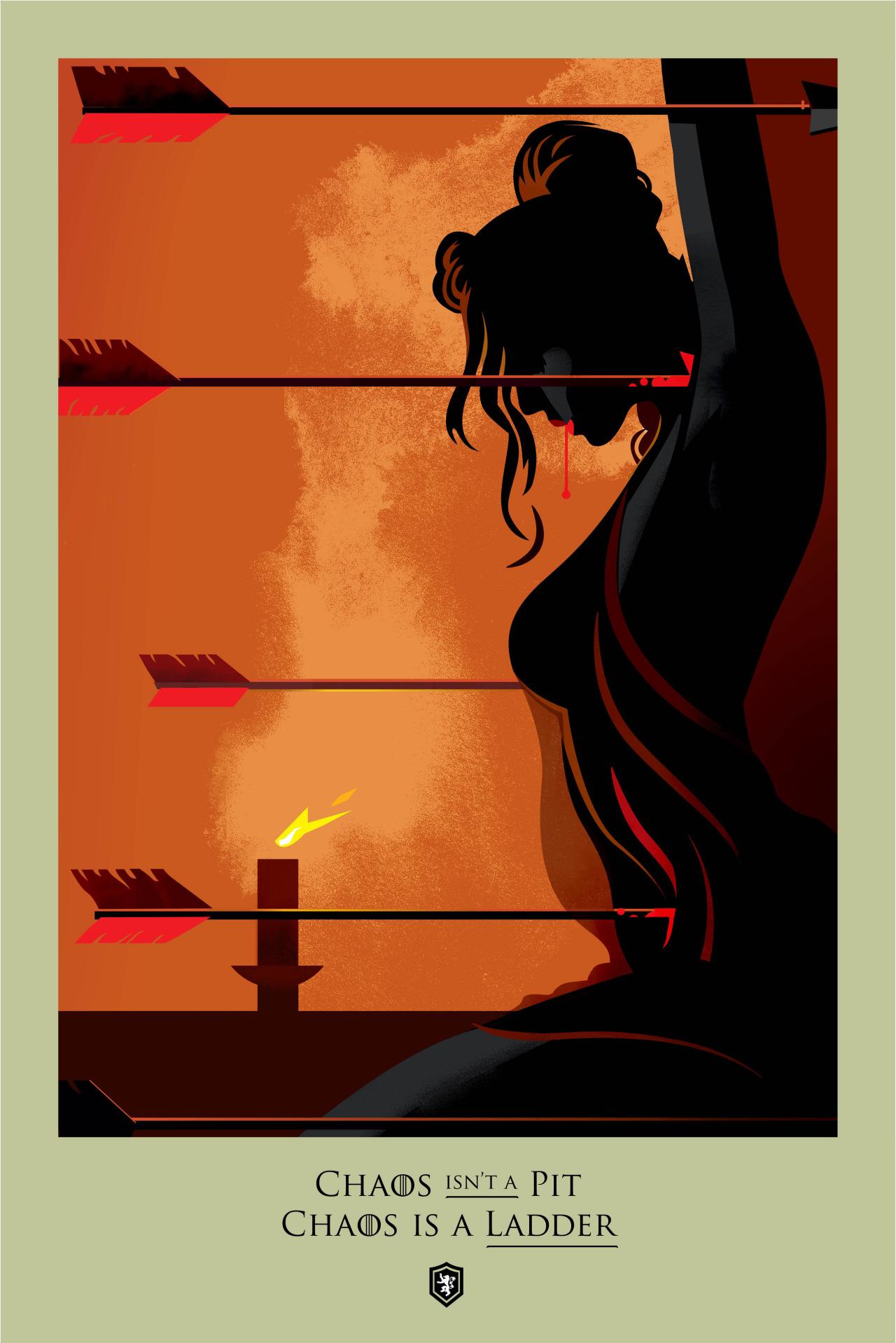