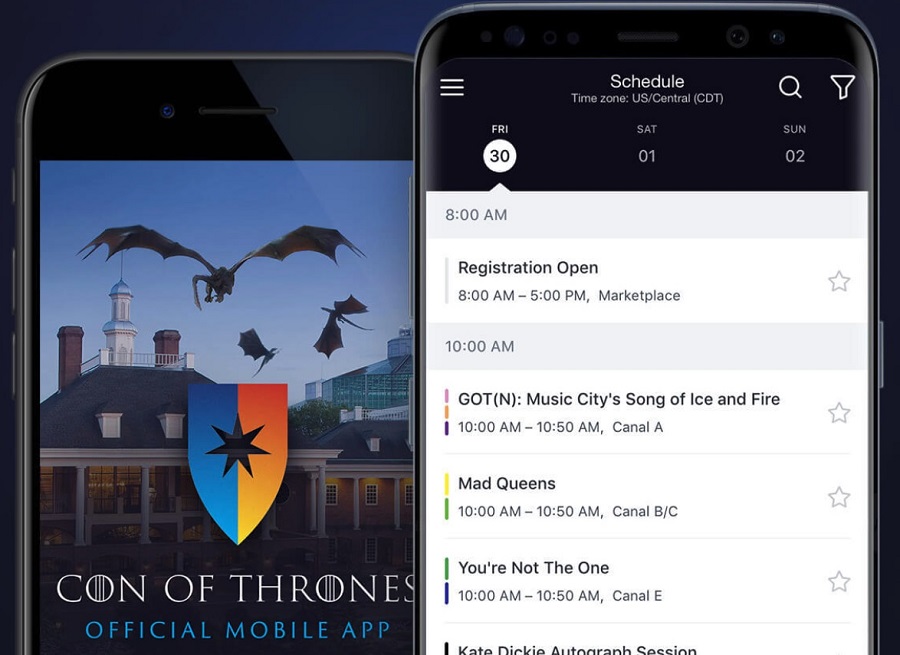 We’re especially excited about the latest news from Con of Thrones, because we here at the Wall had a hand in developing it. The Game of Thrones convention has racked up a long list of guests over the past few months, but now it’s time for news of a different sort: programming!

The complete schedule for the convention has been unveiled, featuring over a hundred hours of programming spread over three days. The speakers and panelists have also been revealed, confirming the CoT attendance of fandom favorites such as podcasters A Storm of Spoilers, Bald Move, History of Westeros, and A Cast of Kings, and YouTubers Preston Jacobs and Rawrist. And of course, you can look forward to meeting a whole lotta Watchers there!

As for the schedule, Oz and I volunteered to help develop some of the panels with Zack Luye (founder/director of Con of Thrones) and the rest of the con’s programming team.  I can tell you that over the past several months, the entire team has set out to craft a colorful range of panels that fans of Game of Thrones and A Song of Ice and Fire will all love. And I think we’ve achieved that.

Speaking of us, where will we be? The Watchers on the Wall will be doing an Everything You Need to Know for Season Seven Live Podcast on Saturday, July 1st, at 1:00PM in the Great Hall. We’ll be digging into the new trailers, pics, and interviews, getting everyone all up to speed and ready for season 7. Knowing us, most likely there’s going to be a lot of laughter, love, debating, and inappropriate humor. Oz, Petra, Axechucker, Bex, Luka, Vanessa, and I will be there on the live podcast and on a variety of other panels too- click on our photos in the Speakers listing to find out more!

A sampling of can’t-miss highlights of the con:

Spotlight: Carice van Houten: The Game of Thrones star discusses her role as the mysterious and deadly Red priestess Melisandre, in a spotlight interview with Zack Luye and Hannah Panek of Game of Owns. (July 1, 11AM)

A Lady’s Armor: The Fashions of Westeros’ Leading Ladies: The Emmy-winning costumes of Game of Thrones’ leading ladies are explored by fashion designer Hogan McLaughlin, studying the clothes and the character choices behind them. (July 1, 11AM)

The Great Debates: Con of Thrones’ battle of wits, where absolutely anyone can take part, stepping up to the mic to make their case regarding the panel topic. There’s no sign-up required, just show up ready to battle! There are seven topics (natch) for seven panels (see schedule for times and details):

A Proud Taste for Scarlet and Castamere: Dipping into history, Pajiba‘s Genevieve Burgess explores the connection between two powerful women, one fictional and one very real: Cersei Lannister and Eleanor of Aquitaine. (June 30, 4PM)

And those are just the tip of a delightful iceberg! Check out the rest at conofthrones.com/schedule.

In addition to visiting the website, you can also download the Con of Thrones app, available for iPhone and for Android users. The app contains the entire con schedule, allows you to mark favorites and make notes, displays all the speaker information and beyond. So check that out if you live on your smartphone, and want all the con info at hand!