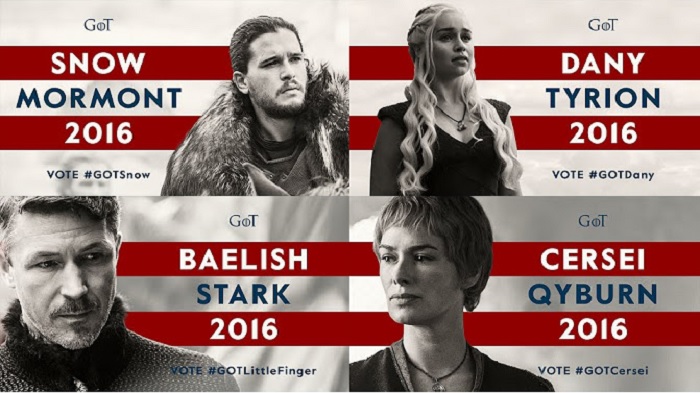 HBO has released four new campaign videos for each of the candidates running in the #GOT2016 Election showing what each has to offer their would-be subjects. Daenerys Targaryen and Tyrion Lannister’s video is called “Break the Wheel“, which she promised to do last season.  Jon Snow and Lyanna Mormont’s video, on the other hand, is called “Serve the People“, a fitting title methinks.   A video entitled “Power is Power” is, you guessed it, Cersei Lannister and Qyburn’s offering. And what else would Littlefinger and Sansa’s video be called but “The Game“.

Videos and more after the jump!

You may recall that a couple of weeks ago HBO announced a first:  an election campaign GOT-style to go along with the release of the Season 6 DVDs.   Along with the new hashtags you can use to support your candidate of choice and a snazzy intro video, they created a website where you can read their platforms and then vote for one of the four teams (not to mention links to buy Season 6 online).

HBO followed up that initial release with the following four videos.  Here is Dany being all regal and powerful and stuff with her wise but not so-sober adviser Tyrion.

Let’s not forget our power hungry queen, Cersei, and her Dr. Frankenstein and personal assistant, Qyburn.

Last but definitely not least the sinister mind behind the whole hot mess, Littlefinger and his increasingly more powerful young protege, Sansa.

With over 19 million Facebook likes on their page, it looks like Littlefinger and Sansa are leading with 34% of the vote while Dany and Tyrion and Jon and Lyanna are tied for second with 32% of the vote. If you haven’t pledged your support yet, what are you waiting for?!