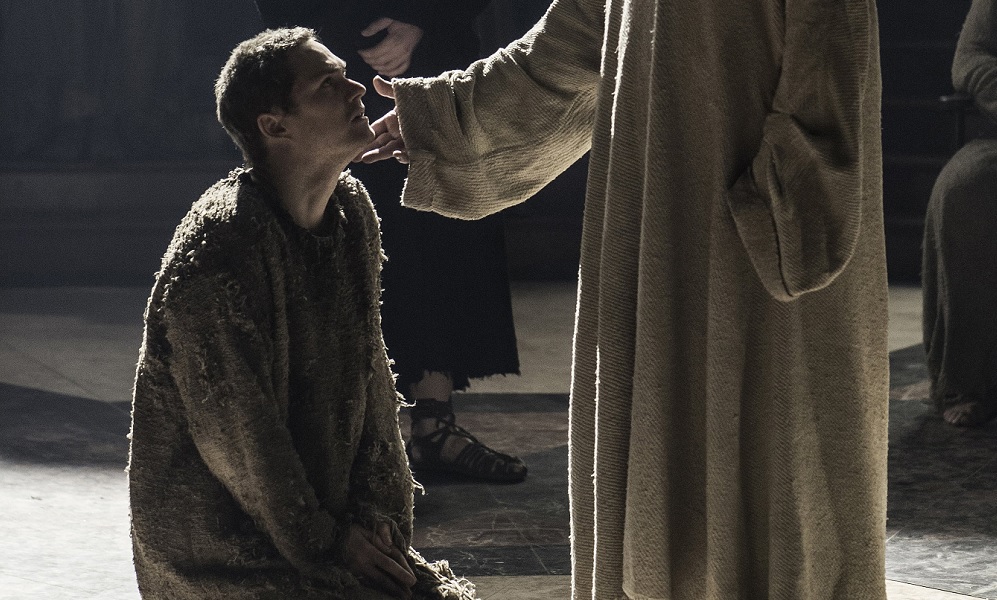 One of last season’s most dearly departed, Finn Jones who played Loras Tyrell since season 1 of Game of Thrones, has a great new interview with Vulture this week. The actor talks about his new gig, filming Iron Fist, but still has time for a few questions about his work on GoT. As always, Jones is delightfully forthcoming and creative in his responses.

The actor discusses his final season on the show, and Loras’ trial, revealing that when Loras’ forehead is being carved with the seven-pointed star, episode director Miguel Sapochnik‘s wife and 2-year-old daughter were on the set watching!

He also addresses something I’ve been idly wondering about since last season- whatever happened to Olyvar (Will Tudor), who seemed to disappear without a scratch once he’d made his public accusation against Loras. When it comes to Loras’ former lover, Finn says,  “I’m not even sure Olyvar’s alive at this point. I doubt he is.” He goes on to defend his own character’s actions during the trial, when he confessed his “sins” before the Sparrows in order to be freed, and asked to join their numbers.

Jones says to Vulture, “A lot of people said, ‘Oh, Loras is weak. Why didn’t he stand up for himself? He’s supposed to be a warrior!’ All this shit. The show didn’t show much of Loras’s torture, so it might be hard to find empathy with his situation, but when you get into the mindset of what it must be like to be down in those dungeons, he would have been abused. Pretty badly abused. I think a Theon-level of abuse when on down there. His spirit, his body, and his mind were broken to such a drastic extreme that he was willing to just do anything to make it stop. I believe what happened is they gave Loras a speech to read and said, “Look, you just turn up on the day, say this, and then you’ll be free.” So the way I played it, the speech that you hear me do, those weren’t my own words. I was pretty much forced against my will to deliver that speech.”

Something that sets Finn Jones apart from the rest of the cast is that he’s always had a LOT of opinions about Game of Thrones and A Song of Ice and Fire. I don’t blame most of the stars of the show for not reading the books or paying much attention to the endgame beyond their own character- it’s not required for doing their job as an actor. But it’s always been a pleasure to watch Jones nerd out over Westeros and he really goes off in this interview with his view of how the war for the throne and the battle between ice and fire should play out.

He explains, “I think what needs to happen is ice and fire are going to go to war, a huge war between those two factions, and I think in that war, they will destroy themselves. There will be complete chaos, complete destruction. It’ll just be a war-torn map. And I think out of that winter carnage, spring will follow, and what we’ll see is power being given back to the individual realms. I think the Iron Throne will be dissolved, both physically and ideologically. A Small Council will be set up — not to take power, but to give power back. Hopefully, a more democratic and more progressive era will arise on Westeros.”

There’s more to his vision for the endgame, and he elaborates on how it ties into the current political climate of the world. Read that and much more at the source!