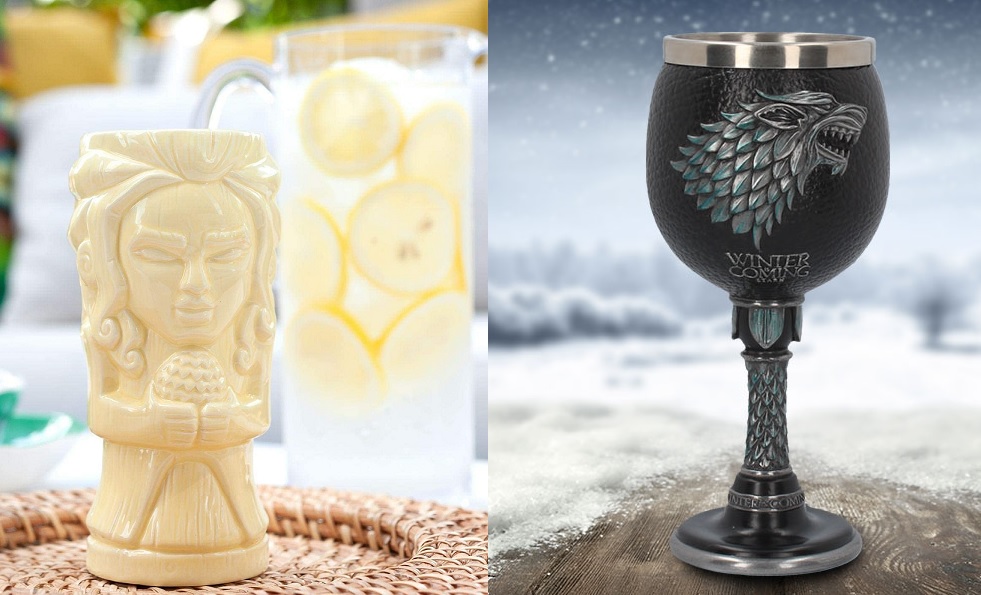 Happy 10th anniversary, Watchers fam! Okay, the site’s not that old but Game of Thrones is and we’re all about celebrating the Iron Anniversary this month. It’s the perfect time to spread the love and spread the merch with another Watchers on the Wall worldwide giveaway. So we have two splendid prize packages for our readers this week, loaded with GoT goodness. That’s right, two lucky winners. What’s in the box? Details below!

How do you enter to win? Leave a comment, and you will be entered once. The giveaway will be accepting entries for seven days. The complete rules are listed below with additional ways to enter through social media posting! 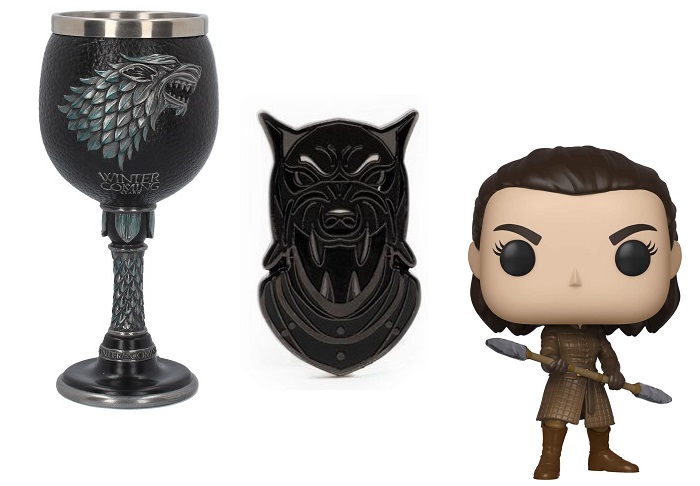 Winter is Coming Goblet – Officially licensed by HBO and Game of Thrones, the goblet’s base features “Winter is Coming” written on a silver band, and the stem has stylized silver wolf fur leading to a solid black body. On the side of the body is the wolf’s head sigil of House Stark.

Arya Stark with Two-Headed Spear Funko Pop! Figure – #79 in the series, this Pop! Vinyl figure depicts Arya in Season 8 of Game of Thrones, ready for her final showdown with the army of White Walkers and the Night King.

The Hound Limited Edition #ForTheThrone Pin – Created to commemorate the final season of Game of Thrones, this collectible pin is no longer available for purchase. It’s crafted of enamel and measures 1.5 inches.

MaraThrone Socks – Courtesy of HBOMax, check them out on our Instagram. One pair of socks to rule all Seven Kingdoms. Made in the USA and decorated with the sigils of the Great Houses of Westeros. 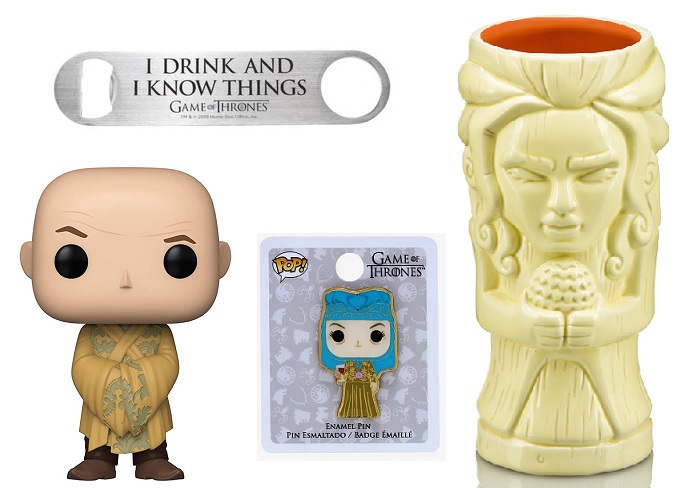 Geeki Tikis’ Daenerys Targaryen Mug – The ceramic tiki mug features Daenerys Targaryen. The officially licensed mugs hold 20 oz of beverage for your MaraThrone, stand approximately 7” tall, and are top-shelf dishwasher safe and microwaveable. No word on if they can withstand dragonfire.

Lord Varys Funko Pop! Figure – #68 in the series, this Pop! Vinyl figure depicts the Master of Whisperers is one of his trademark looks, golden robes and general disdain.

Olenna Tyrell Funko Pop! Enamel Pin – Be careful, this one will prick you! The sharp-tongued Queen of Thorns is represented in this colorful collectible pin, standing 1.5 inches tall.

“I Drink and I Know Things” Bottle Opener – Tyrion Lannister would approve of always being at-the-ready with this bottle opener. The heavyweight silver opener features Tyrion’s line and the Game of Thrones logo. Made of 14-gauge stainless steel, this bottle opener measures 7 x 1.5 inches.

I know, house allegiances, it’s so 2011. But we’re turning back the clock all week. So if you had to choose, which team are you, Stark or Targaryen?

How do you enter? You can enter in 3 different ways, earning up to 3 total entries.

Entries are accepted for seven days, closing the giveaway for entries on Monday, April 26th, 2021 at 8am EDT. The two grand prize package winners will be randomly selected from the entries, and announced soon thereafter.