Emilia Clarke, Maisie Williams and Sophie Turner at the Game of Thrones season 6 wrap party! | Watchers on the Wall | A Game of Thrones Community for Breaking News, Casting, and Commentary 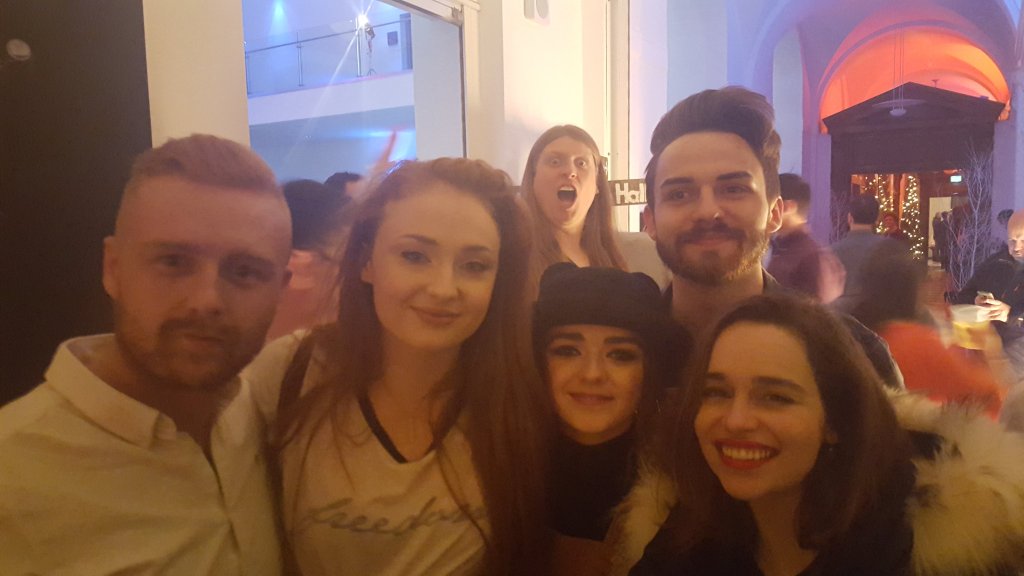 Filming on Game of Thrones season 6 is wrapping up soon, but the show sightings are still rolling in. Last night, a few of the series’ stars were out on the town in Belfast, including Emilia Clarke, Maisie Williams, and Sophie Turner.

Clarke herself shared a photo of her co-stars, and we have a group photo posted by a local lucky enough to encounter the actresses yesterday.

We had the privilege of meeting these three beautiful ladies from game of thrones last night. Thank you! @SophieT pic.twitter.com/GgZz0P7QMJ

Knowing which performers are in town might give us a clue when it comes to a few puzzles, since there are other Game of Thrones roles due to film around now. Clarke, Williams and Turner are in Belfast currently, and Carice van Houten was on set in early December. Kit Harington was spotted in the area last week as well.

Several casting notices fell into our hands this fall with shooting dates for December, and those character names remain unconfirmed. As of this time, we don’t know which actors are playing them, or which storyline they belong to. We might be able to make some educated guesses based on timing.

To refresh your memory, we have:

Haggard-looking lord:  “the best remaining part this season,” a man in his fifties. He’s the lord of a noble house, described as intelligent, wry, incisive and articulate. He’s “a hard man and a realist.” Game of Thrones is searching for an actor who is “great with language and who has a lot of wattage.” They mention that he has a good and long scene in which it’s mostly the haggard-looking lord talking the entire time.

Captain of the Tower: Aged 35 – 45. The captain is in charge of the security of a castle. He’s an able soldier, physically fit, commanding and capable. He has a lot of dialogue in a scene where he is with his superiors and has to make a difficult decision.  This is a one-scene part with leading cast. The role shot for one week, beginning December 2nd in Northern Ireland.

“Boyce”:  He’s a callow young nobleman in his 20’s who has been thrust into a position of power before he is ready. They’re looking for an actor using a Northern accent, and one who is physically fit, can play somewhat hot-headed and can look rugged. Our source says the character has a couple speeches in a scene with leading cast. He was expected to shoot for one day, December 16th, in Northern Ireland. These are the last known filming dates for season 6.

We speculate that this role might be the new Lord Cerwyn, since Ramsay flayed the previous one.

“Fletcher”: He’s a fat nobleman in his 60’s. He has distinctive rugged features, a Northern accent, and a distinguished air. Our source says he has a stirring speech during which he unexpectedly shifts political allegiances. The actor is only expected to shoot for one day- the same day as the above role, on December 16th, in Northern Ireland.

We speculated this role might be Wyman Manderly or an equivalent of the character.

There was also a casting call for a brown-eyed baby from Extras N.I. for December 17th. It’s not known if this call is actually for Game of Thrones or not, since the company handles other productions as well as GoT. As of December 8th, they were now searching for a brown/black-haired baby for December filming in Belfast.

With the overlap of the captain and the haggard-lord, it seems possible their storyline is entwined.

“Boyce” and “Fletcher” clearly belong to the same story and scene as they were posted together, and they’re both Northern lords  filming on the same day. With Turner in town, I wonder if perhaps Sansa is meeting with the Northern lords to rally them to the Stark cause.

Update: Looks like the event last night was actually the wrap party! Sometimes the party is held a few days before filming is done. It was held at the Ulster Museum.

#GameOfThrones xmas wrap party in the Ulster museum last night, and they even built a set! Still getting it out today.

#GoT6 Wrap Party was great, and thanks to @sophiet and @maisie_williams for the selfie! #gameofthrones #Belfast

Meeting Liam Cunningham! Such a gentleman!