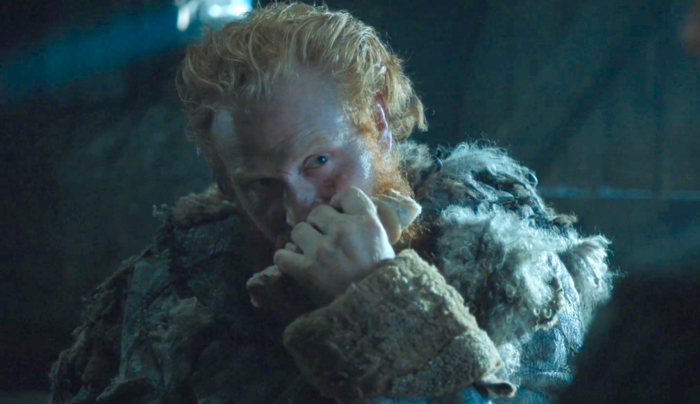 In new interviews, Game of Thrones director Daniel Sackheim discusses the possible spark between Brienne and Tormund and the emotional impact of Jon and Sansa’s reunion.

During a dinner scene at the Wall in last week’s episode, “Book of the Stranger,” Tormund and Brienne exchanged some meaningful glances –

-and the internet exploded in Brienne/Tormund fan videos, photoshop projects and ship names. Sackheim, director of the episode, spoke to Tech Insider about the fan reaction.

“Honestly, I’m surprised anyone even noticed,” he said. “I mean, it was meant to be a little grace note, and the fact that it’s blown up with the buzz it has on the internet and on the blogosphere is kind of shocking to me.”

He discussed the contrast between Brienne and Tormund that makes the prospect of their pairing so unexpected and appealing.

“It’s cool because they’re two characters who are sort of expressly cut off from emotions. Certainly [Brienne] is. She’s not particularly forthcoming or feminine. She’s all about her charge, her duty, her responsibility, and you hardly ever get to see her as person … Tormund, you know, he’s a f—ing wildling!” Sackheim said. “The notion of these two unlikely people coming together, I think it’s very cool.”

Of course, Tarthbane did take a backseat in the episode to Jon and Sansa’s reunion – a much anticipated moment that many viewers never thought they’d get. Sackheim admitted to The Hollywood Reporter that it wasn’t until he saw crew members crying on set that he realized the impact the scene was going to have.

Sometimes as a director, you’re just looking at what’s in front of you, and not taking into account the bigger picture and the epic nature of two siblings who have been separated for six seasons — and have never had scenes together, and were both really looking forward to it — reuniting. The only note I gave them during the scene was, “Hold yourself back. As much as it’s joyous to see each other, you’re equally as scared. You don’t know what to expect.” The operative word was fear. Fear of the unknown. In a way, it added to the emotional resonance of the scene.