Britain's Royal Mail to release 'Game of Thrones' stamp series | Watchers on the Wall | A Game of Thrones Community for Breaking News, Casting, and Commentary 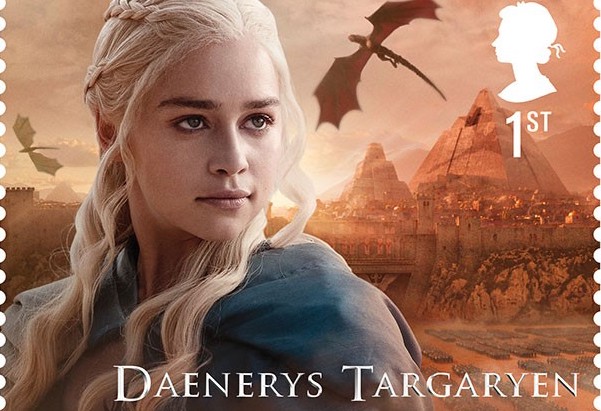 The British Royal Mail service will introduce 15 “Game of Thrones” stamps, including this one of Daenerys Targaryen, on January 23.

Sure, you could send your mail by raven, but these days it’s much quicker to use the post office. If you still want a bit of a Westerosi feel to paying a gas bill or sending a birthday card, however, then the series of Game of Thrones stamps to be released by the British Royal Mail service should suffice.

Thrones will join the ranks of such iconic franchises to get their own stamps as Star Wars and Doctor Who with the release of the 15 stamps on January 23. The Royal Mail cites the “significant British contribution to the production” of Thrones, including a predominantly British and Irish cast and filming of the series at Titanic Studios in Belfast, the Linen Hill Film Studio in Banbridge and on location elsewhere in Northern Ireland, with additional filming in Scotland, as just some of the reasons to commemorate the award-winning series.

The stamps depict “photographic representations of central characters from across all seven seasons,” according to Royal Mail, with each stamp featuring an individual character and a montage of related images, such as Dany’s conquering of Meereen. “The result is a set of ten bespoke images that embody the crux of each character’s story,” the Royal Mail says.

Ten of the 15 stamps that will be featured in the Royal Mail’s “Game of Thrones” stamp series.

The stamp series also will include five non-human characters, including giants, dragons, the Night King and White Walkers, the Iron Throne and the beloved direwolves.

The stamps are available for pre-order now at the Royal Mail’s website, with the collection available online and from 7,000 Post Office branches beginning January 23.