Geoffery - Watchers on the Wall 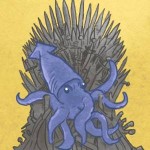 Lady Geoffery is a writer, anthropology student and long-time fantasy fan who discovered Game of Thrones after everyone assured her, ‘that show with the dragons and tits,’ would be a really great distraction from writing her thesis. Her research interests include skeletal deformities, Icelandic culture and social attitudes towards appearance, her hobbies include poisoning wine, throwing children from windows and emerging unscathed from flaming pyres. In her spare time she blogs about fake meat, edits small-press comics and sends angry poems to celebrities she’s taken umbrage with. Writing a lengthy novel about a one eyed prostitute with magical powers and aspires to a waistcoat collection as fancy as GRRM’s. Also works at a bakery. None of the pies are dry.