Anatomy of a Throne: “The Wars to Come” | Watchers on the Wall | A Game of Thrones Community for Breaking News, Casting, and Commentary

A Dance with Dragons, the fifth entry in the Song of Ice and Fire series, sees Tyrion’s opening chapter answer what was, at the time, an 11-year-long question: just what had happened to everyone’s favorite, witty, patricidal dwarf? (Unlike in the HBO series, which showed Tyrion Lannister boarding a ship right after he killed his erstwhile lover and lordly father, the previous novel contained no such precious information. The ensuing wait was long and terrible, made all the more pregnant with the seemingly infinite possibilities of where Lord Varys was sending Martin’s – and the audience’s – favorite character.) 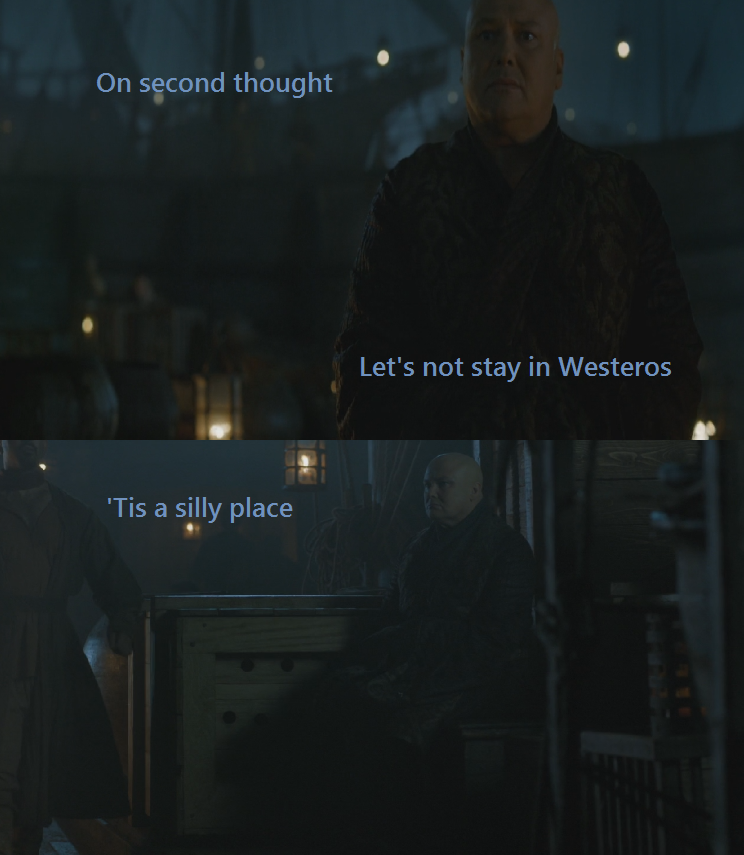 This first chapter also, in typical Martin fashion, is an elongated and highly detailed affair, depicting Tyrion’s leisurely, wine-infused explorations of Magister Illyrio Mopatis’s manse (the audience is forgiven if they don’t remember dear old Illyrio, the larger-than-life character who has been seen only twice in Game of Thrones’s 41 episodes, both of them in the first season [“Winter Is Coming” (episode 101) and “The Wolf and the Lion” (105)]). The Imp drinks, contemplates either joining the Wall or going down to Dorne to crown his niece, Myrcella Baratheon, in the Dornish tradition to “make rather a lot of mischief,” drinks some more, and then, of course, eats with the “grotesquely fat” magister. Throughout the proceedings, hints are dropped as to what, exactly, Illyrio wants from him, culminating in the revelation that he means to ship the dwarf off to Daenerys Targaryen, to aid her in her eventual ruling of the Seven Kingdoms of Westeros.

It is not until Tyrion’s second chapter – another slowly plotted affair, rich in atmosphere, depicting the pair’s glacially slow meanderings aboard a litter through the Essosi countryside – that the heart of the matter is slowly breached: Magister Mopatis, we discover, has been plotting a Targaryen restoration in Westeros for quite some time, with the end reward for him being the position of master of coin on the ruling Targaryen’s small council (though Tyrion is immediately suspicious of such a stated motivation). The Imp, for his part, is to be a royal advisor, with his quick strategic wit and treasure trove of Westerosi political insights. It’s the best that a dispossessed and borderline suicidal former lordling could hope for. 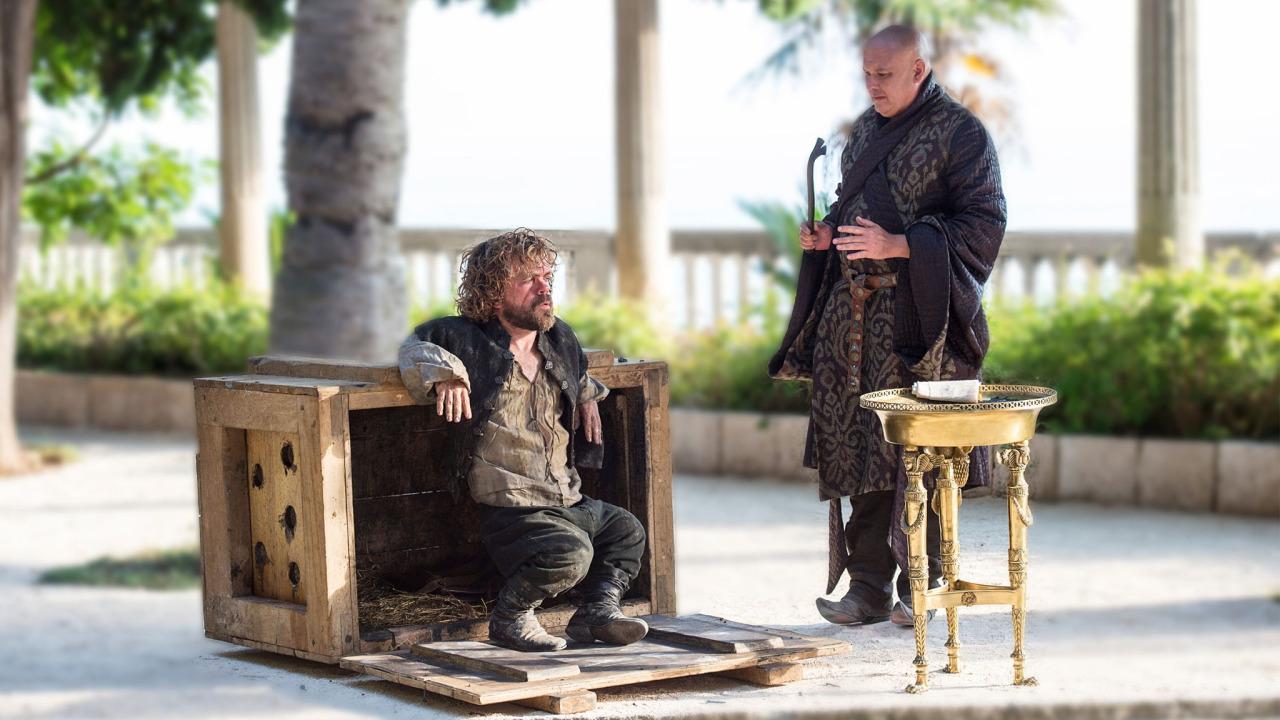 “The Wars to Come’s” rendition couldn’t be more different in its staging, pacing, and – to a lesser extent – in the psychology of its players. The most blatant change, of course, comes in the switching out of Illyrio with Varys, a move which was all but guaranteed, given showrunners David Benioff and Dan Weiss’s tendency to utilize only their core cast instead of rotating in a never-ending parade of secondary and tertiary characters. And the fact that the fourth season finale, “The Children” (410), showed the Spider climbing aboard the same ship that was going to smuggle Tyrion off the continent was just icing on the metaphorical cake (in the novel, the eunuch remains behind in King’s Landing but goes into hiding for nearly the entirety of the story).

(Of course, the fact that Illyrio Mopatis hasn’t been seen in three-and-a-half long years more than likely played a role in the executive producers’ thinking on this front – this was a major consideration, after all, in their decision to remove any mention of Tysha, Tyrion’s first wife, in “The Children,” despite her being a huge motivator in the little Lannister killing his lord father. Such considerations are at once wholly understandable but still disappointing, particularly considering the presence of another long-lost minor character, Lancel Lannister [who was last seen in “Blackwater” (209)], in the ep.) 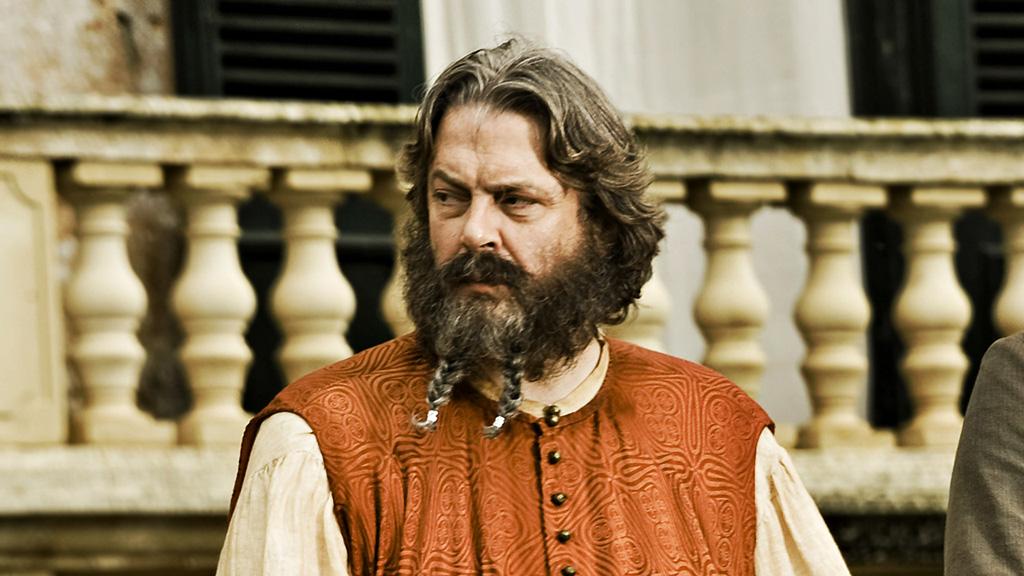 This replacement of Illyrio may seem a relatively minimal alteration, but its ramifications ripple in ways both big and small throughout Tyrion’s two scenes – and, presumably, throughout the rest of his story arc for the remainder of the season. Varys and the Imp’s familiarity with one another allows them to cut right to the dramatic chase, removing the many layers of introduction, argumentation, and deception that hang so heavily in the air on the page. (It also allows for some banter and genuine laughs, which have long been another hallmark of Weiss and Benioff’s take on the source material.) And the straightforwardness of the Spider’s explanations of his and Illyrio’s conspiracy to dethrone the Baratheon dynasty is remarkable, providing a frankness that is, for good or ill, wholly missing from A Song of Ice and Fire’s many installments. (More on this in just a moment.)

Other, smaller changes worth noting: Tyrion’s extreme self-loathing isn’t quite as pronounced on the screen as it is in Dance with Dragons, partially due to the loss of inner monologues but mostly thanks to the removal of the Tysha component from the character equation. The dwarf is unceremoniously emptied out of his crate (a cask, technically, in the book) in the wine cellar of the magister’s palace in order to help hide his passage into the Free City of Pentos; in the television series, such nuanced story considerations are consistently trumped by production values – it’s far more visually arresting to have grand vistas play out in the background of long dialogue scenes instead of a dimly lit basement.

And, finally, the origin story of Varys and Illyrio’s partnership is not only far simpler in Game of Thrones, it is also, pointedly, much more innocent; rather than simply joining up with a group of people who all “saw Robert Baratheon for the disaster he was,” in the novels the two brainstormed a fencing scheme that had the eunuch steal from lesser thieves while the future merchant would sell the stolen goods back to their rightful owners – for a premium, of course. The motivations behind such a streamlining could either be short- or long-term – it is just too early in the season to know for certain. 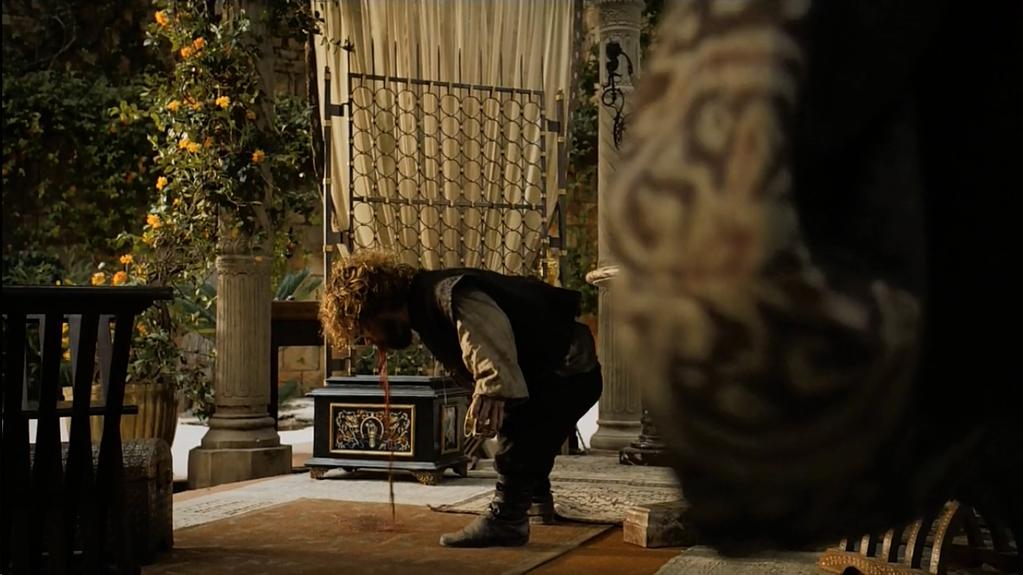 A final word (or two) on these two scenes’ particularities needs to be said. The trimming and tucking that the showrunners engaged in is, quite frankly, something that needed to be done to Martin’s original story, and its continued effects upon the overarching narrative will, undoubtedly, continue to reinforce its structure, let alone pick up its pacing. Furthermore, the efficiency and efficacy both of Benioff and Weiss’s ability to convey extreme amounts of backstory or exposition continues to unbelievably impress; how Tyrion Lannister’s entire state of mind can be established with just a few lines of dialogue, a few shots of Peter Dinklage’s stellar performance, and one (comically timed) bout of vomiting needs to be committed to a filmmaking class on adaptation.