Anatomy of a Throne: "Mhysa" | Watchers on the Wall | A Game of Thrones Community for Breaking News, Casting, and Commentary

Note from the author: this Anatomy of a Throne for “Mhysa” was intended to be exclusive to the ebook re-release of my work, which would have been called It Is Known: An Analysis of Thrones, Vol. III (just as the second season finale, “Valar Morghulis,” is only available in Vol. II). Unfortunately, real life got in the way, and that long-awaited (by two people) installment has yet to materialize – and may never.

So, considering that bleak little prognostication and the little fact that the Watchers on the Wall community has been nothing short of amazingly supportive and appreciate of my work here, I decided to go ahead and have that potential selling point be an exclusive to the site. Please enjoy, and offer your three or four dollars to the God of Tits and Wine instead. 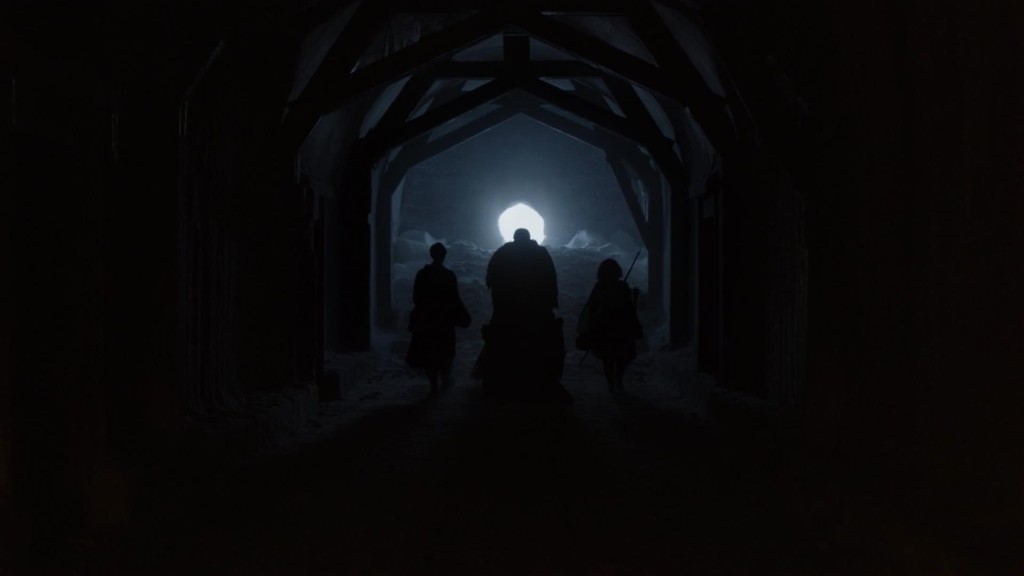 Though only a small component of George R.R. Martin’s Song of Ice and Fire series, magic is nonetheless an important one, underpinning the greater enemy that all the houses of Westeros will have to one day face in the next Long Night (the titular “ice”) as well as providing the basis of the formation of the Seven Kingdoms themselves (“fire”).

For reasons that have much to do with budgetary constraints – though the desire to make things more “believable” for television audiences certainly plays a role, as well – showrunners David Benioff and Dan Weiss have systematically trimmed back, if not outright removed, all things magical and mystical. Yes, the tentpole elements still remain, such as the Stark children’s pet direwolves or the House of the Undying in Qarth, but they are supremely diluted ingredients in HBO’s recipe; in the case of the former, the direwolves are seen only rarely (as opposed to literally never leaving the Starks’ side in the novels), while the latter was depicted as more a surreal dream and less a full-fledged submersion in prophecy. (Though the body-doubling of the warlock Pyat Pree was a nicely handled bridge between the books’ abject mysticism and the show’s more “realistic” bent.)

All of this made “Mhysa’s” depiction of the Black Gate, the secret passageway that connects the Nightfort to the lands beyond the Wall, such an intriguing possibility. It was beyond doubt that the showrunners would downplay the complexities of the strange doorway, but there was also the possibility – no matter how slim – that an attempt would still be made to retain even just the essence of what was the most blatantly magical item to yet appear in the series.

As it turns out, Weiss and Benioff’s handling of the gate, specifically, and the overarching Nightfort sequence, generally, is extremely telling of how future seasons, with their inexorable and increasing bent towards the magical, will be handled.

In A Storm of Swords, the Black Gate is described as a “hidden gate, as old as the Wall itself.” It is actually fashioned out of white weirwood, with a giant face carved into it – much like the heart trees that Lord Eddard Stark and the other Northmen worship – and it is instantly recognizable as a magical artifact:

A glow came from the wood, like milk and moonlight, so faint it scarcely seemed to touch anything beyond the door itself, not even Sam standing right before it. The face was old and pale, wrinkled and shrunken. It looks dead [Bran thought]. Its mouth was closed, and its eyes; its cheeks were sunken, its brow withered, its chin sagging. If a man could live for a thousand years and never die but just grow older, his face might come to look like that.

What’s more, the door suddenly springs to life when approached – its eyes open, and it even speaks. “Who are you?” it asked Bran Stark and his party as they approached. It can only be accessed by a Sworn Brother of the Night’s Watch, who has to recite his vows to make it open – which it does by opening its mouth as wide as a full-sized door. And just to complete the rather surreal picture, as Bran is carried through it in his basket on Hodor’s back, one single water drop falls off the gate’s lip and lands on Bran’s cheek, as warm and salty as a tear. Its exact nature or functionality is never explained, but its dramatic effect is unmistakable. 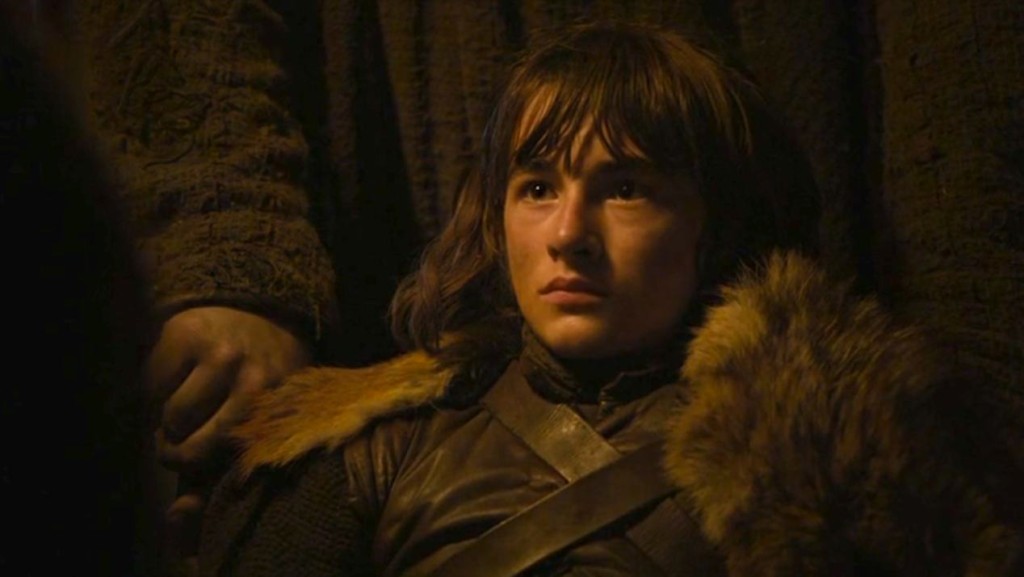 Living, talking (and, possibly, crying) doorways might come off as being a bit incongruous with a book series that is mostly preoccupied with the intricacies of medieval familial politics, but A Song of Ice and Fire does have a strong – if typically subdued – vein of mysticism running through it, and Bran’s character arc as realized in the novels has always had more overt magical tendencies, almost nearly from page one. (It’s also aided and abetted by his travels with the Reed siblings, who provide a significant amount of backstory about greenseeing and their house, priming the reader for this, the final Bran chapter in Storm of Swords.) The Black Gate, then, serves as a cap to Bran’s journey thus far and as the clearest foreshadowing yet of his further magical transformations.

In Game of Thrones, the entire scene is summarily dropped – there is no doorway at all, let alone the Black Gate. Bran, the Reeds, and Hodor meet up with Samwell Tarly and Gilly, and then they are escorted down to a giant tunnel running through the Wall that is not at all unlike the one at Castle Black.

On the one hand, this is an entirely understandable adaptation, one that is consistent with the handling of the previous 29 episodes. All the “filler” material that is primarily designed to establish atmosphere and reveal backstory – Bran (via Hodor) and Jojen Reed exploring the abandoned Nightfort, Meera Reed climbing the Wall to try and scope out where the castle’s secret passageway may be, the telling of several ghost stories around the fire (including that of the Rat Cook, which the writers still deftly managed to sneak in) – is chopped off like so much fat, leaving only the encounter with Sam. And the omission of the Black Gate itself is consistent with the paring back of the other more mystical elements of Bran’s character arc, such as, most famously, the rather involved visions that start when he was comatose after first being pushed out of the window at Winterfell (although those are still represented, even in partial form, with fleeting glimpses of the Three-Eyed Crow).

On the other hand, though, there is a certain degree of incredulousness (ironically enough) with “Mhysa’s” rendition: if there is simply a giant gate left untended at the Nightfort, why haven’t the wildlings found it and exploited it during the past 200 years it’s been abandoned? Why wouldn’t Mance Rayder, the smartest, fiercest King-beyond-the-Wall yet (and a former crow, it should be noted), have heard of it? And, furthermore, just how did Sam and Gilly manage to locate it? In A Storm of Swords, there is a minor sub-plot revolving around the two characters and how they manage to escape the crushing horde of Others/White Walkers – they are led to the ancient castle by a “magical” force and are given explicit instructions on how to access the Black Gate. When this story thread is yanked out of the narrative tapestry, it does, indeed, help to reduce the amount of screen time that needs to be devoted to both Sam and Bran, and it does, indeed, help with the showrunners’ dedication to “believability” (the superficial kind, at least), but it nonetheless leaves a noticeable hole.

Just how noticeable may actually be helped or further hindered by events in the fourth season, when magic is set to make its biggest appearance yet.