Anatomy of a Throne: “High Sparrow” | Watchers on the Wall | A Game of Thrones Community for Breaking News, Casting, and Commentary

Note from the author: my most sincere apologies for having this article be a week late; a combination of personal, professional, and literary factors (my new Tower of the Hand book releases today!) all conspired to derail my schedule for the past two weeks. All I can do is beg your forgiveness and promise this week’s article is still on time for tomorrow. 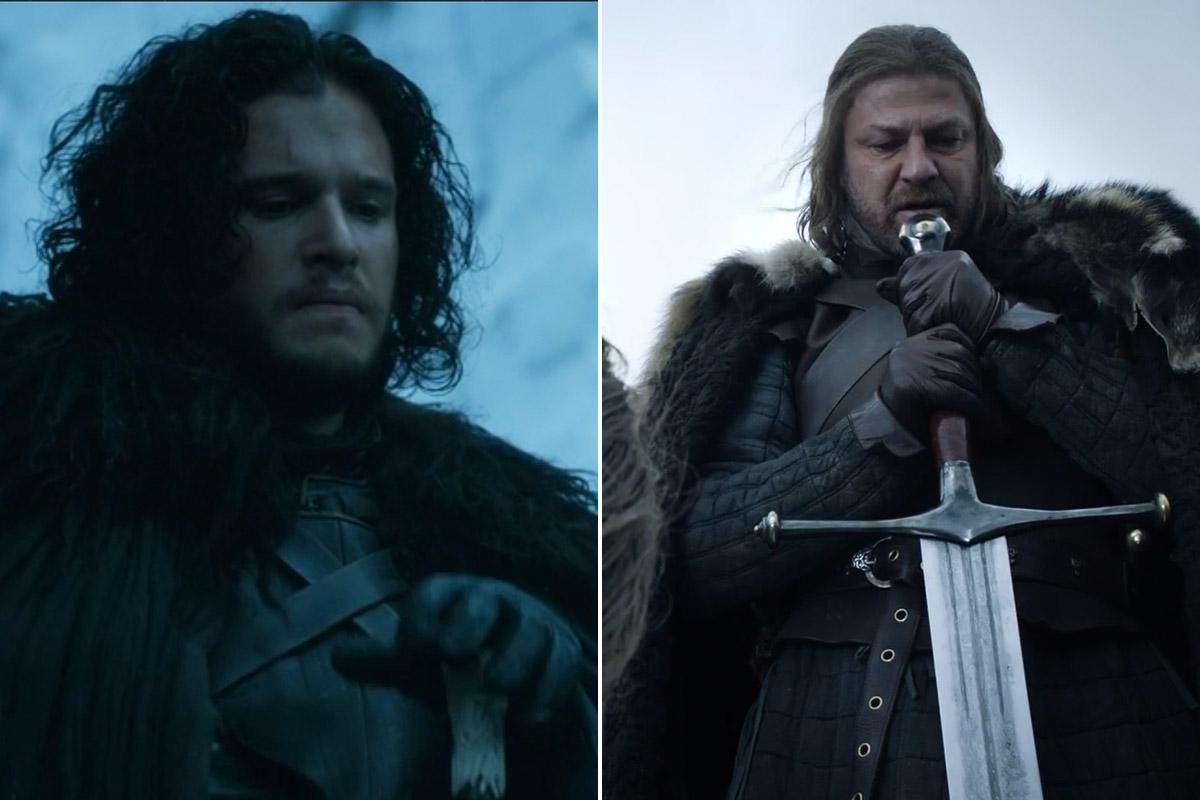 The sequence where Lord Commander Jon Snow executes Lord Janos Slynt is one that is incredibly faithful to the book – something of a growing rarity this season, with the unprecedented number of changes that showrunners Dan Weiss and David Benioff have instituted on practically a minute-by-minute basis. But what changes there are are extremely telling of not only the demands of a visual adaptation, but also of the particular approach that showrunners Dan Weiss and David Benioff have long adopted for their television series.

To really dig into the nitty-gritty details and embark on a full-blown analysis, it will behoove us to, firstly, back up to the beginning of the sequence, to the meeting in Castle Black’s great hall, and, secondly, to quote the corresponding scene from A Dance with Dragons nearly in full:

“Lord Janos.” Jon sheathed his sword. “I am giving you command of Greyguard.”

That took Slynt aback. “Greyguard… Greygaurd was where you climbed the Wall with your wildling friends…”

“It was. The fort is in a sorry state, admittedly. You will restore it as best you can. Start by clearing back the forest. Steal stones from the structures that have collapsed to repair those still standing.” The work will be hard and brutal, he might have added. You’ll sleep on stone, too exhausted to complain or plot, and soon you’ll forget what it was like to be warm, but you might remember what it was to be a man. “You will have thirty men. Ten from here, ten from the Shadow Tower, and ten lent to us by King Stannis.”

Slynt’s face had turned the color of a prune. His meaty jowls began to quiver. “Do you think I cannot see what you are doing? Janos Slynt is not a man to be gulled so easily. I was charged with the defense of King’s Landing when you were soiling your swaddling clothes. Keep your ruin, bastard.”

I am giving you a chance, my lord. It is more than you ever gave my father. “You mistake me, my lord,” Jon said. “That was a command, not an offer. It is forty leagues to Greyguard. Pack up your arms and armor, say your farewells, and be ready to depart at first light on the morrow.”

“No.” Lord Janos lurched to his feet, sending his chair crashing over backwards. “I will not go meekly off to freeze and die. No traitor’s bastard gives commands to Janos Slynt! I am not without friends, I warn you. Here, and in King’s Landing, too. I was the Lord of Harrenhal! Give your ruin to one of the blind fools who cast a stone for you – I will not have it. Do you hear me, boy? I will not have it!”

Slynt did not deign to answer that, but he kicked the chair aside as he departed. 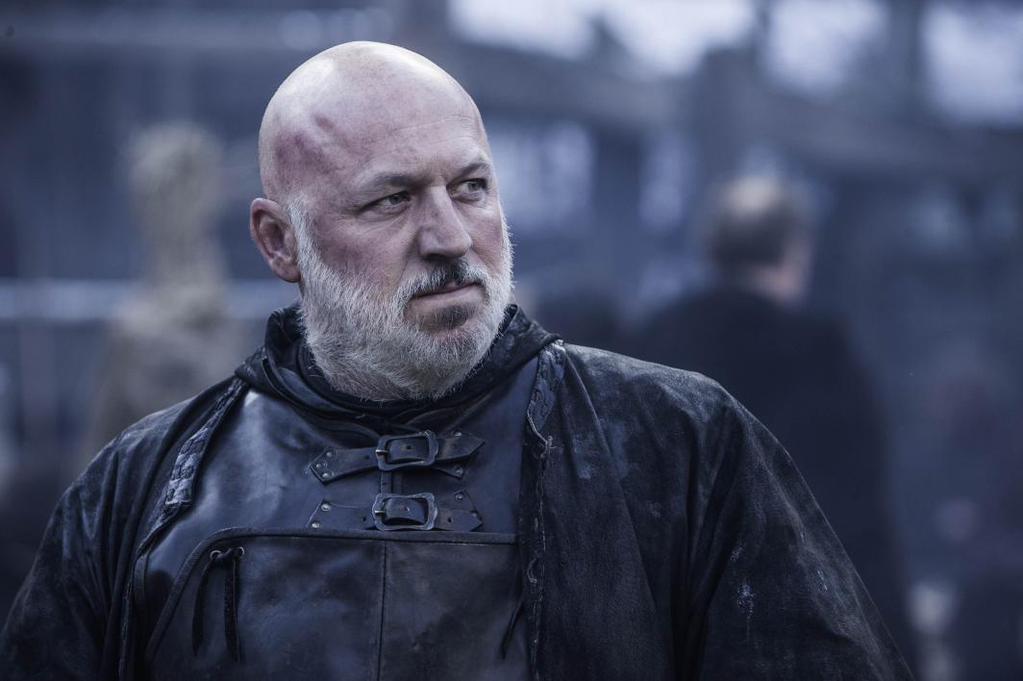 One of the most striking differences between the two versions is the slight reworking of Janos Slynt’s character, a practice which Benioff and Weiss started immediately, from the first season (he was first introduced in “Cripples, Bastards, and Broken Things,” episode 104): gone is the more expressive – some might say more cartoony, given the extreme similarity of the literary version of Lord Janos to the character of Gonza from Hayao Miyazaki’s masterpiece, Princess Mononoke – mannerisms, such as the immediate reddening of his face (or the general frothing at the mouth that all but sprays out of the page in other exchanges from other volumes). Also gone is the rather peculiar construction of the lordling’s speech patterns, which, while never quite as pronounced as, say, the Braavosi syntax (“A man needs a name…”), was still a deft touch that helped to simultaneously make the character stand out while also engaging in some world-building, giving the reader the impression of a full spectrum of regional accents and colloquialisms from across the Seven Kingdoms.

Why would the executive producers lose it? It may be because the actor they cast, Dominic Carter, seems more naturally prone to the severe than to the buffoonish, but the answer more than likely squarely resides in Weiss and Benioff’s desire to strip as much color out of Game of Thrones, both literally and figuratively, as possible, a practice which has been seen time and again since the pilot first aired. The most illustrative example here would be of Daario Naharis, who, in the source material, brandishes a three-pronged, blue-dyed beard, gold-painted mustachios, a gold tooth, blue hair, and extremely loud clothing – which is perfectly representative of many Essosi societies. Since the television series already features dragons, blood magic, and 700-foot walls made from ice, the thinking on the producing staff probably goes, it’s probably best to keep things as “realistic” as possible, particularly considering that the show is meant to feel more like a period piece than, say, The Hobbit. 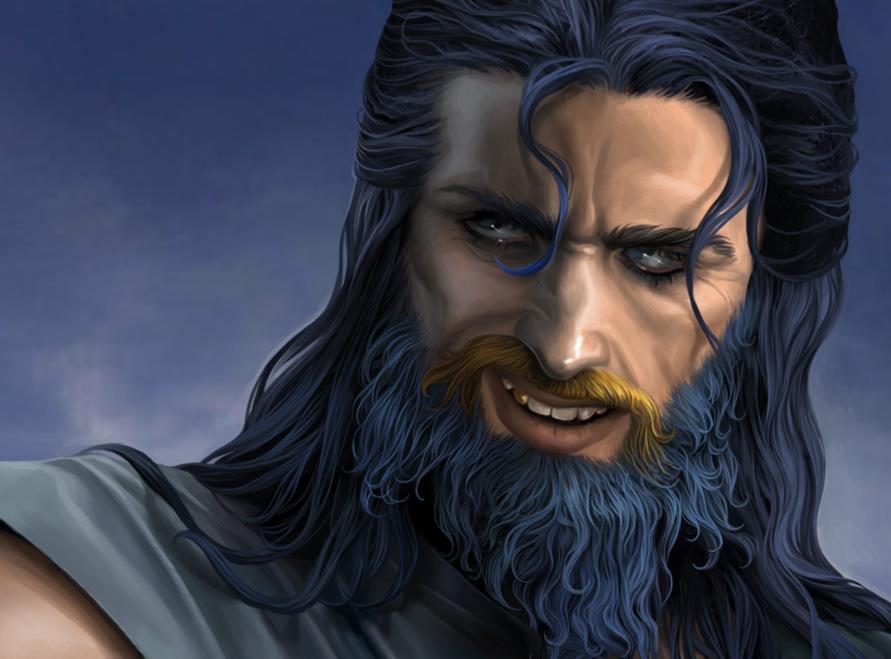 There are also, of course, the usual immediate alterations in location, background action, and exposition (such as the removal of the subplot of Stannis providing some of his own men to garrison the Wall, which, in the series, changes to the would-be king needing the wildlings to fight for him). In the novel, Slynt comes to the lord commander’s (makeshift) office, arriving several hours late and catching Jon in the middle of cleaning his Valyrian sword, Longclaw, which is a bit of business that, in Martin’s handling, becomes an important piece of characterization for both of them: for Jon Snow, it illustrates his willingness to do for himself some of the menial practices that would ordinarily be left for his steward (a point which the author directly spells out); for Janos Slynt, his stubborn refusal to acknowledge a barred blade conveys just as much disrespect for the bastard boy as does his tardiness.

Jon’s humility and extraordinary patience continues immediately after this scene, when the action jumps to the next morning and finds Lord Janos breaking his fast in the common room, continuing to flout his orders. All eyes fall on the lord commander as he calmly states, “I will give you one last chance. Put down that spoon and get to the stables. I have had your horse saddled and bridled. It is a long, hard road to Greyguard.” The order for execution, of course, inevitably lands next, although here, on the page, Jon first calls for him to be hanged before changing his mind – and recalling his lord father’s edict that the man who issues the order must be the one to swing the blade (“Winter Is Coming,” 101) – and beheads Janos Slynt himself.

It’s important to note the compression of the two parts into one continuous sequence for the series, a necessary accommodation for pacing; with each scene burning through so many pages of text per second (even the imaginary ones for this season), and with so many scenes jam-packed into every episode, everything must be condensed as much as humanly possible. But it’s even more instructive to see how, even with the loss of Jon’s internal monologue and the elongated period of time, the exec producers still manage to translate the characterization that Martin worked into every nook and cranny of the events: Jon Snow’s verbal sparring with Lord Janos might have none of the Zen-like calm from Dance with Dragons, but, then again, he has none of his literary counterpart’s hesitation regarding execution methods. Thus, the resoluteness of the Lord Commander’s character is still demonstrated – and the writers are able to make manifest to the audience the undercurrent of disdain that Martin’s inner monologues were able to convey privately to the reader. It is a deft, if perhaps subtle, reworking of the material.