Anatomy of a Throne: "And Now His Watch Is Ended" | Watchers on the Wall | A Game of Thrones Community for Breaking News, Casting, and Commentary 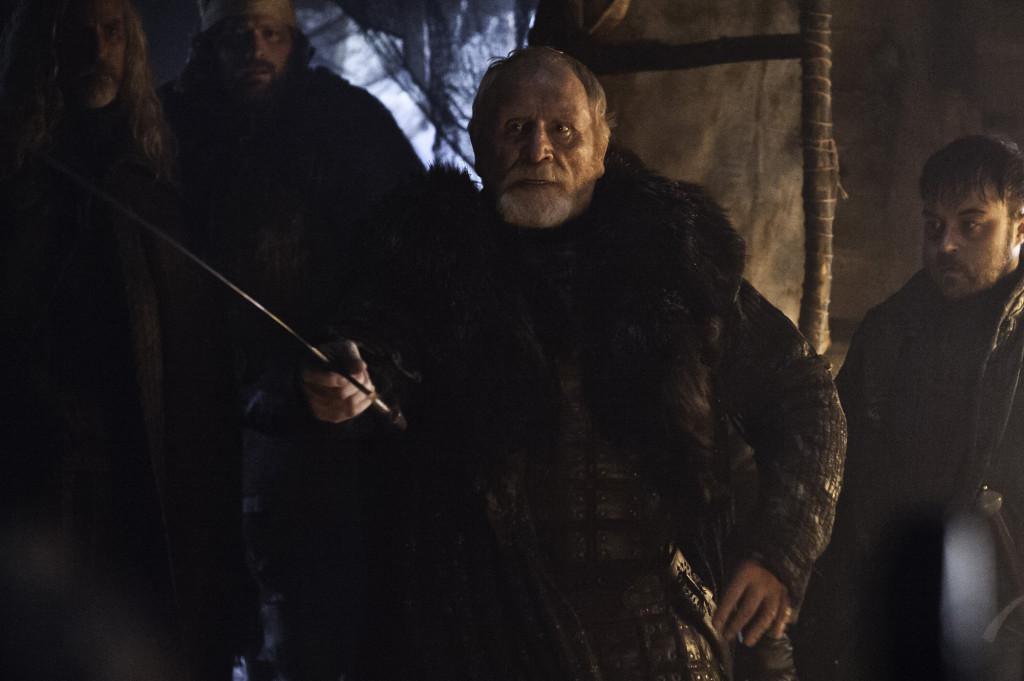 As is common for HBO’s Game of Thrones, the scene at Craster’s Keep in which a fight breaks out among the Night’s Watch brothers and Lord Commander Jeor Mormont is killed hits all the same notes as George Martin’s novel, A Storm of Swords: the black brothers come limping back to Craster’s after suffering huge losses at the hands of the White Walkers (called, of course, the Others in the books), and the grizzled old wilding provides aid, albeit scant and grudging. When confronted with the possibility of his sitting on a secret larder, Craster becomes angry – and then instantly violent when called a bastard. It is after he charges one of the Watch members, to gut him with his axe, that he is killed, with Mormont similarly being stabbed while attempting to stop his rebelling underlings.

The same notes they may be, but the key is entirely different. What precipitates the outbreak in the novel is the birth of Gilly’s son, up in the loft of the keep. Craster announces the birth, which Commander Mormont stoically acknowledges, and suggests rather curtly that it’s long past time for the crows to leave. The spoken reason is that the arrival of a new mouth will mean a greater drain on the wildling’s winter stores, but the unspoken reason hangs heavily in the air. And, in the novels, it is, indeed, unspoken – it’s only been hinted at and fleetingly discussed, by Jon Snow and Mormont off to the side while departing Craster’s in the previous volume, that the newborn boys get offered up to the Others as sacrifices. (Indeed, many a plot point that is only obliquely alluded to on the page becomes the centerpiece of a full-fledged sequence on the screen, and they are oftentimes used to generate new, more action-filled moments, which Jon’s fisticuffs with Craster and the Watch’s sudden ejection from his hall back in season two [“What Is Dead May Never Die,” episode 203] amply demonstrates.)

Mormont reluctantly agrees to leave and announces they’ll be off the next day. When Craster learns of the decision, he grows more amiable – “or as close to amiable as Craster ever got,” Martin tells us – and decides to throw a small feast in celebration. It is when everyone sits down at the tables and discovers that there are only two loaves of bread that the confrontation starts – and ends with Craster’s being yanked back by his hair and having his throat slit open before he can kill the offending crow, as in the series. 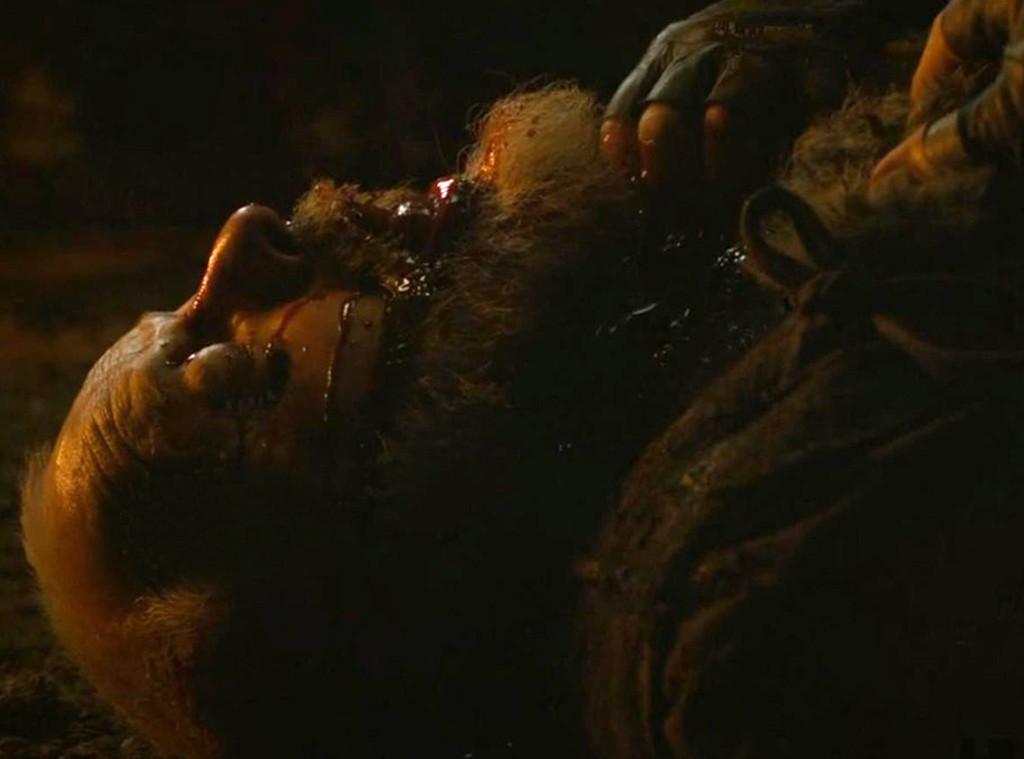 Jeor Mormont’s death is just as surprising in Storm of Swords as in Game of Thrones, but it’s far less heroic:

The Lord Commander stood over Craster’s corpse, dark with anger. “The gods will curse us,” he cried. “There is no crime so foul as for a guest to bring murder into a man’s hall. By all the laws of the hearth, we –”

“The are no laws beyond the Wall, old man. Remember?” Dirk grabbed one of Craster’s wives by the arm, and shoved the point of his bloody dirk up under her chin. “Show us where he keeps the food, or you’ll get the same as he did, woman.”

“Unhand her.” Mormont took a step. “I’ll have your head for this, you–”

Garth of Greenaway blocked his path, and Ollo Lophand yanked him back. They both had blades in hand. “Hold your tongue,” Ollo warned. Instead the Lord Commander grabbed for his dagger. Ollo had only one hand, but that was quick. He twisted free of the old man’s grasp, shoved the knife into Mormont’s belly, and yanked it out again, all red. And then the world went mad.

He doesn’t even manage to draw his sword, let alone nearly choke his murderer to death. He ends up on the floor, with his head in the lap of Samwell Tarly, who’s practically catatonic with shock. He has only enough life left in him to urge Sam to go back to the Wall and tell Castle Black everything that has happened, plus one special final request: he wants Sam to find his exiled and disgraced son, Ser Jorah Mormont, and tell him that he’s not only forgiven, but that his father’s dying wish is for him to also take up the black. 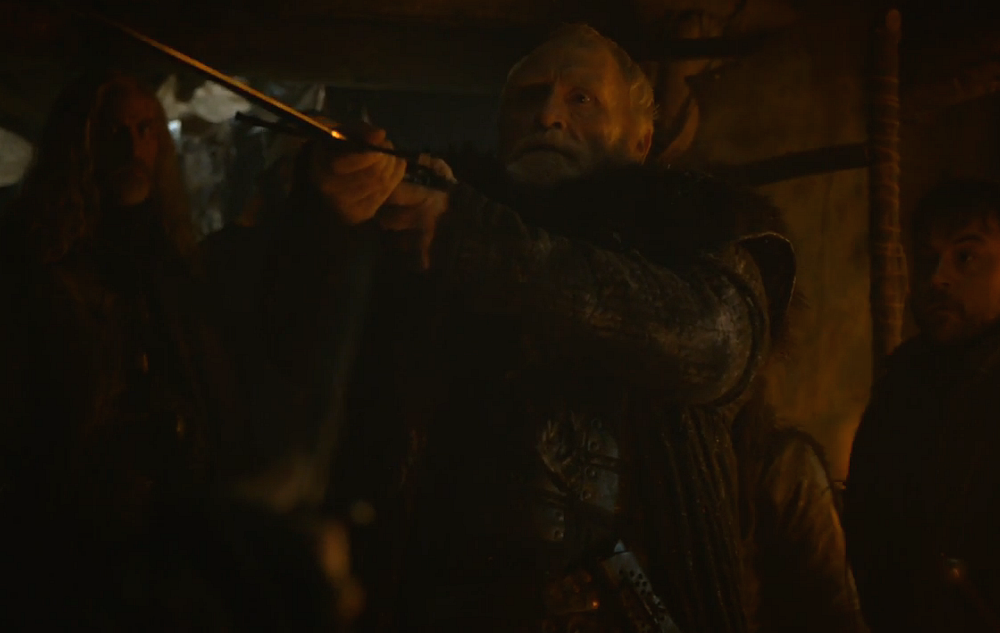 Sam’s role in the mutiny scene is similarly underplayed compared to the HBO adaptation. He instantly lapses into shock, crumpling crosslegged on the floor, while all hell breaks loose around him. Grenn attempts to shout at and slap him, but it’s to no avail. Even the old man’s dying wishes aren’t sufficient to move him; it’s only when two of Craster’s older wives thrust Gilly and her babe onto him that he’s finally forced to get up and act, but even this is dulled with Sam’s usual fear and current shock – a far cry from the self-assured and surefooted rescue of Gilly depicted in Thrones.

Why the changes? First and foremost, showrunners David Benioff and Dan Weiss have shown a consistent and far-ranging tendency to expand on the characters’ decisions and personalities, to make them more easily fit the stereotypical action hero mold (as is also seen in the death of another black brother, Yoren [“What Is Dead May Never Die,” 203], or, even, in the played-to-the-hilt confrontation between Lord Eddard Stark and Ser Jaime Lannister [“The Wolf and the Lion,” 105]). Wanting the protagonists to be more idealized, even if slightly, is undoubtedly part of the rationale behind the changes – they view themselves as writing for TeeVee, after all, even if it is HBO – but there’s also the more banal reason of screen time. Having characters who are more decisive not only makes for a more (traditionally) striking scene, it also takes a considerably smaller amount of time than a character who is rolling around on the ground and waffling.

The constant companion in any adaptation – particularly this one – is, naturally, budget, which can broken down equally into money and time, since every hour spent on-set is another hour that literally several dozens of crew members have to be paid. Fewer shots, fewer speaking parts, fewer lines of dialogue, fewer extras, no trestle tables – these all add up quickly and decisively, stripping a multi-layered scene like the one depicted in the novel of much of its textures and, thus, presenting a hole for something to be placed into. With much narrative focus, screen time, and money having already been spent on, say, Jeor Mormont and Sam Tarly, it’s the easiest and most logical path to expand on their presences. Doing so in a spicier, more heroic way simply becomes icing on the translating cake. 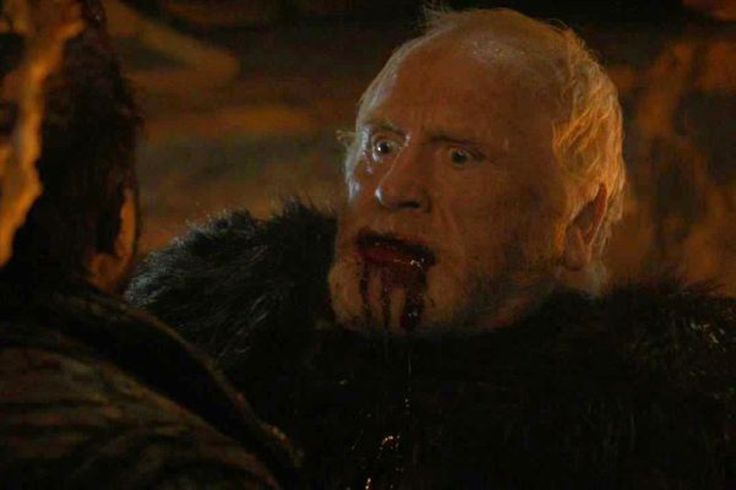 But if “sexying” everything up is a persistent motivator, it’s extremely interesting to note that the writer-producers deliberately chose to not include the grittier, more titillating behaviors of all the other players in the scene: in Storm of Swords, there are several Night’s Watch brothers who rush down to the cellar to gorge on Craster’s larder or rape the younger, prettier wives up in the loft or to even “couple” with a weeping girl right on the feast table. While the decision to omit such elements can very easily – and, probably, very accurately – be traced back to the same concerns of budget and schedule, there may also be a certain degree of restraint or subtlety at work here, a willingness to push at the narrative boundaries and make the series more than what it was the episode or even the season before.

There have already been several hints of this at play across the opening four installments of Weiss and Benioff’s best season yet, and it’s the possibility of more that will help to keep viewers on the edge of their seats just as much as seeing more swashbuckling daring-do from their favorite characters.