Anatomy of a Throne: "A Man without Honor" | Watchers on the Wall | A Game of Thrones Community for Breaking News, Casting, and Commentary 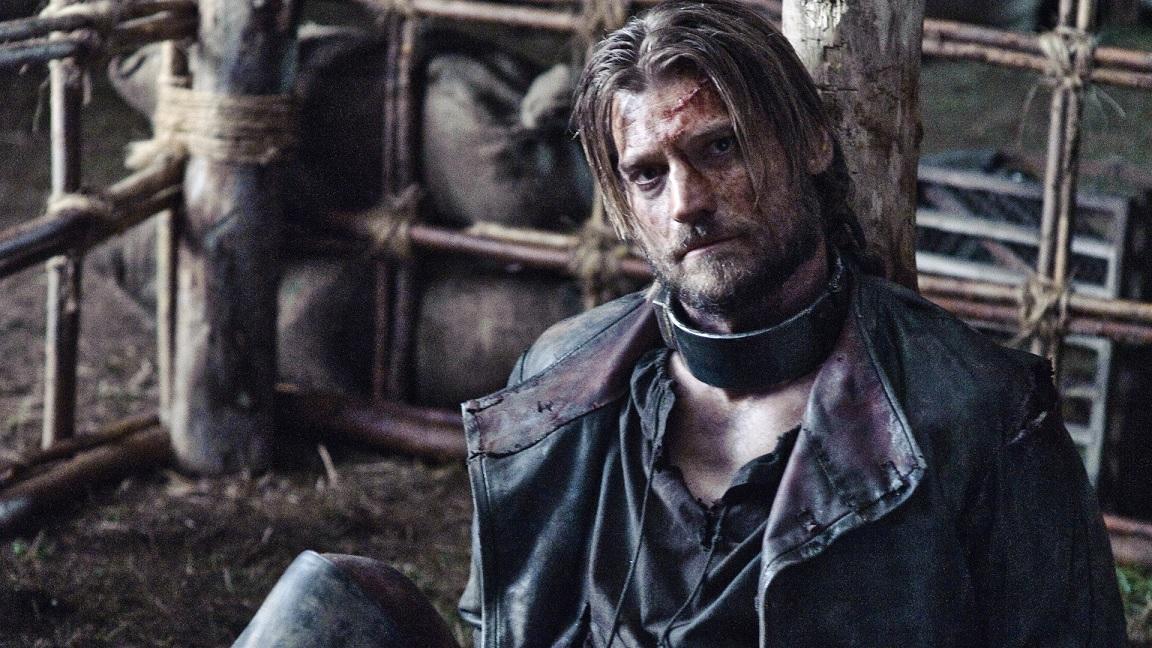 The scene where Lady Catelyn Stark visits – well, in the novel, it’s interrogates – Ser Jaime Lannister in his cell is easily the single most fascinating scene produced thus far in terms of its adaptation. And most intriguingly, while the sequence itself, of course, forms the basis of this fascination, much of its substance, in fact, lies within the decisions that have lead up to it, going as far back as season one.

It all starts, as most of these considerations do, with what isn’t on the screen. In the books, there is an entire – if minimal – subplot that revolves around Riverrun, the seat of House Tully and the birthplace of Catelyn. It is here that Robb Stark makes his temporary headquarters after his initial victories at the end of the first novel/season (and where he is named the king in the north), and it is here that Cat’s father lies dying, her uncle acts as one of King Robb’s most valued scouts, and the Kingslayer is confined to a cell that befits his birth and station, a lord’s chambers in a tower, as opposed to being put constantly on the move in a makeshift pen from encampment to encampment (although this is a clever solution to not having the screen time/budget to establish either Riverrun or the Tully family, and it’s a rather elegant way to insert a few more scenes with Jaime into the overall narrative; his encounter with Lady Catelyn is literally his only appearance in the entirety of A Clash of Kings, a 950-page [or so] book). 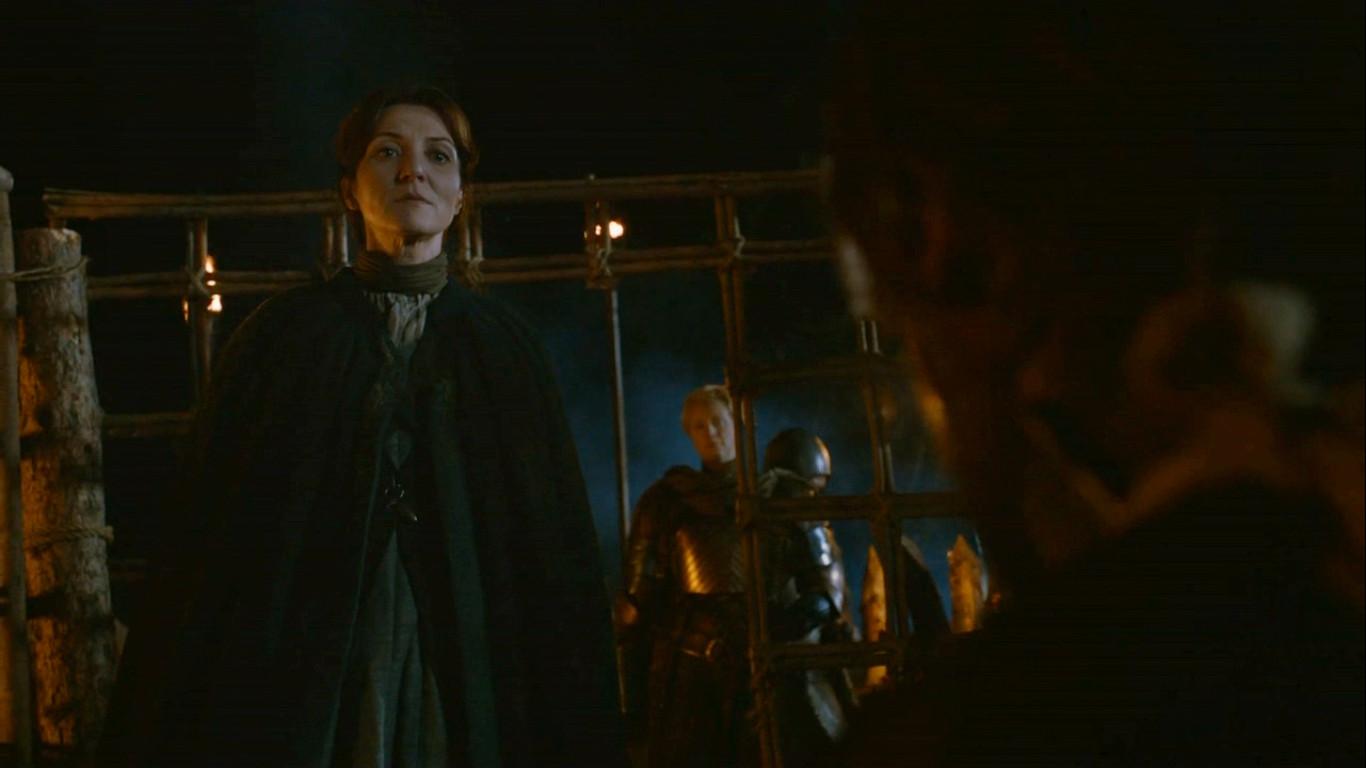 Then there’s the other big, oft-changed element in Game of Thrones: motivation. In the television series, the growing tension surrounding Jaime’s botched escape attempt (centered unwittingly and unknowingly around his cousin, the peace envoy) threatens to spill blood amongst the Stark bannermen, and then spill his own precious blood, as well. (To be fair, Lord Rickard Karstark’s thirst for vengeance is still there in the book, albeit, at this point in the story, greatly reduced; Ser Jaime had killed two of his sons in the Battle of the Whispering Wood, the conflict that ended in his capture.)

On the page, meanwhile, Cat has just learned that her two young sons, Bran and Rickon, have been butchered at the hands of Theon Greyjoy. Expressing her utter desire for revenge, the only thing she seems to have left, she takes Brienne of Tarth down to Jaime’s black cell (where he was locked up due to a botched escape attempt that was engineered by his brother, Tyrion, and which was unwittingly and unknowingly centered around their cousin) and gets him well and truly drunk to divulge his secrets. Jaime being Jaime, though, he will only play the interrogation game if Catelyn plays his game – not unlike Hannibal Lecter going quid pro quo with Agent Starling, they exchange bits and pieces of information, back and forth, starting with the rather startling admission that it was he who flung young Bran out of a tower window roughly a year ago (and a description of just how, exactly, Lord Eddard Stark’s father and brother were murdered by the Mad King Aerys, a tale which gets moved up to another made-for-TV conversation between he and Ned [“Lord Snow,” episode 103]). 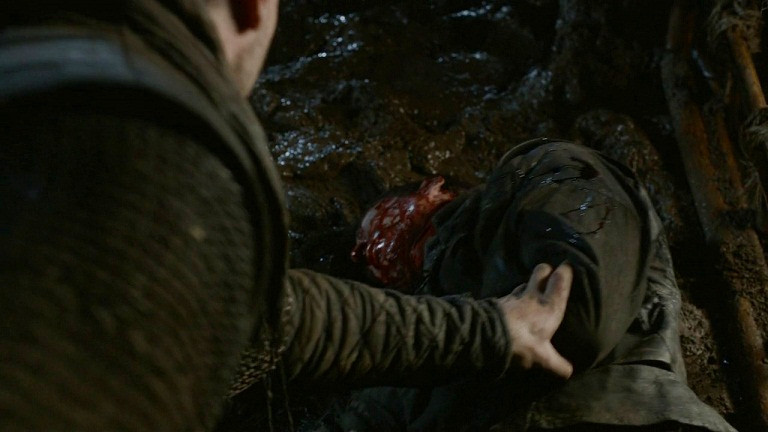 All of which leads to the next major divergence. Gripped with the aforementioned desire to work the Kingslayer back into the limelight – and to give the first season a nice, clean breaking point narratively (as well as, perhaps, thematically), which has been a major consideration for the writing duo as they slice up Martin’s five interlocking books into neat little televised chunks – showrunners David Benioff and D.B. Weiss ripped the first half of this scene off and inserted it into the first season finale, “Fire and Blood” (110). As such, the audience gets to see Jaime’s revelation that he did, indeed, attempt to kill young Brandon Stark, but it never gets to learn why, or see the ambiguous payoff of Cat asking for Brienne’s sword (though, in the episode, there is a nice little beat where Jaime, after having dismissed Lady Stark, gets to reveal the self-loathing that is so well hidden when around others).

The results, though, are more profound than a different capping moment. The back half of the original scene, where the captive Lannister argues that his honor is actually more intact than poor old dead Ned’s (thanks to that inconvenient bastard son of his), plays nicely between the actors and even manages to shine thanks to the added quips regarding the “beast” that is Brienne the Beauty. And it ultimately, in the grand scheme of Martin’s world, manages to go through the same motions and end on the same note, but it does so at a price: a lot of the emotional inertia that is built up from Jaime’s barbs and confessions and that ends with Catelyn’s angrily demanding a weapon is simply missing. The intensity of the scene is largely lost, even if its tenor is still there, and the repercussions in episodes and seasons hence will similarly be affected.

It is still a marvel to see how the producers managed to distill such a protracted and involved series of storylines into such a streamlined and cohesive single runner, however, and how they manage to condense such subtle and nuanced relationships into similarly efficient characterizations (a feat which is also very much at work in the corollary to this throughline, the Greyjoy invasion and subsequent occupation of Winterfell). Indeed, when all is said and done, the fact that one scene can be both faithful and divergent, can carry both its spirit as well as its content to varying degrees at varying times, is the biggest marvel of all, and shows just how well – and just how poorly – Weiss and Benioff are managing the Herculean task of bringing A Song of Ice and Fire to life as Game of Thrones.

Then again, they are adapting the unadaptable.