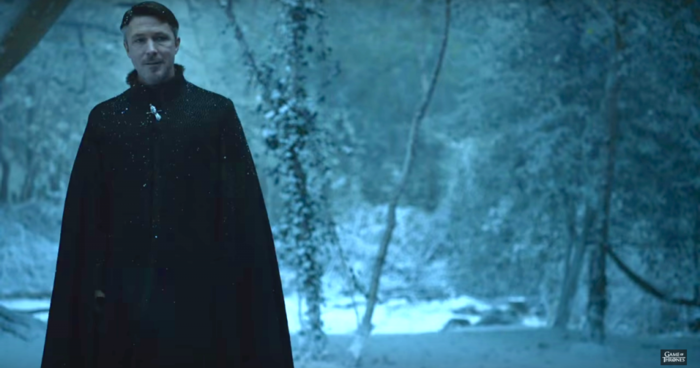 Aidan Gillen talks about Littlefinger’s state of mind in Game of Thrones season 6 and shares his personal thoughts on the character and Natalie Dormer lists Margaery’s ideal and worse case scenario cellmates.

“For me, this time out, there’s a level of atonement in relation to Sansa and my misjudgment of Ramsay Bolton,” Gillen said. “A lot of what I’m up to is atonement and really trying to align myself the right people … I left Sansa married to a psychopath. It’s probably the one time we’ve seen Littlefinger slip up. He really didn’t know about him. He should have.”

Gillen addressed fans’ skepticism that the seemingly omniscient Baelish didn’t know what kind of man he was marrying Sansa to.

“[I]n the world of our story everyone does not know [about Ramsay’s behavior]. A lot happens behind closed doors, or closed gates,” he said. “I know it seems unlikely Petyr Baelish, who knows everything, would be unaware of his reputation and the depths of his cruelty. In a way, this shows a new side of him, a faltering, and I do want to make amends.”

Gillen said that, though it’s not always reflected in the script, he believes Baelish feels a “paternal warmth” for Sansa.

“I like Sansa, you know? So I’m trying to find something humane and gentle and maybe even warm in the midst of my treachery and calculation – which is pathological … But you can only do what’s on the page.”

In a short video for Entertainment Weekly, Natalie Dormer talked about which cell mates would most improve or worsen Margaery’s present situation. Sharing a dungeon with her brother would be ideal “to keep each other company” but she imagines being locked up with Joffrey’s ghost would make for the worst prison experience possible.