The 2016 Watchers On The Wall Awards: Now accepting nominations! | Watchers on the Wall | A Game of Thrones Community for Breaking News, Casting, and Commentary 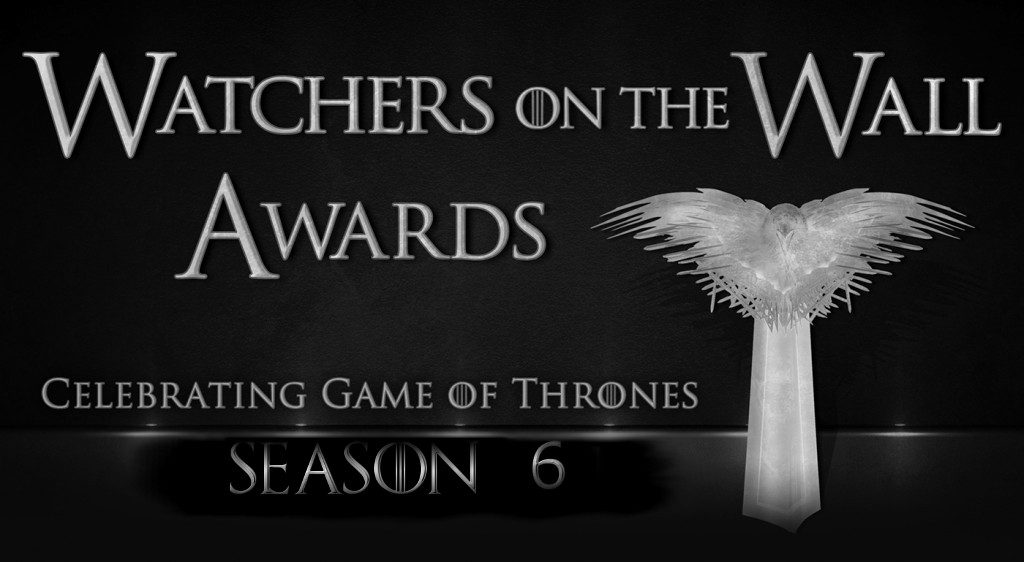 It’s that time of year again, when we look back on the season and celebrate the best of Game of Thrones. The Watchers on the Wall Awards are entirely in your hands, and the choosing begins now.

How does it work? The initial suggestions for nominees in every award category come from the fans, and run-off voting determines which top five win the final nomination in their category. The final fives battle it out in each category, and we choose our ultimate season 6 winners!

Our guest categories, for the short-term scene-stealers and amazing performers who snag your attention even with a limited amount of screen time. Who qualifies for this? Actors and actresses with credited appearances in 1-3 episodes in Season 6, and no more than 10 episodes total for the entire series. Check the performer’s credits on IMDB if you’re uncertain if they qualify.

Best Death Scene: because there is death and carnage galore on GoT. Pick your faves!

Best Visual Effects Sequence/Scene: dragons, wildfire, White Walkers, oh my! So many to choose from, think long and hard. Be specific!

Funniest Scene: we mean actually funny/witty, not “I thought it was so bad, it made me laugh.” Because people always forget just how funny Game of Thrones can be.

Best Dramatic Scene: the scene with the moments that had you glued to the screen, eyes wide, weeping, shouting, begging for more. The very best of Game of Thrones.

Our Action categories always present something of a pickle, for us and the fans voting- how do you put an entire battle up against a graceful duel? A punch-’em-up against a wide-scale dragon roasting? The answer of course is you don’t.

So we’re splitting the Best Action category into two- one for the bigger-scale action sequences, and a second for the smaller-scale fight scenes.

*Please be specific! For example, “Battle of the Bastards” doesn’t cut it as a nomination because that’s the episode name, and the episode contains both the Winterfell and Meereen battles. If you’re not sure which category it belongs in, nominate the scene you have in mind anyway and we’ll figure it out. It’s all in good fun!*

All-around Best Quote: the lines you love that may not be funny but are just as brilliant and memorable.

For Best Episode, every season 6 episode will go into the final pool, so no nominations are needed.

Post your list of nominees in comments below, with the categories/nominees clearly labeled. You’re permitted to submit more than one nominee per category in this initial submission process. Go on and have fun, and have your choices in by next Thursday,  August 11th, at 12PM Eastern Time!

*People have very different opinions on whether an actor is supporting or lead, so it’s important to label your nominations carefully! Ultimately, a performer can win a best actor/supporting nomination in only one category, and it will be in the one in which they gained the most votes. Using the submission ballots, storylines and season 6 screen time as a guide, the determination of placing a performer into lead versus supporting will ultimately be at WotW’s discretion.*

The winners of the Watchers on the Wall Awards will be announced on one night, on a date to be determined in the near future. (Feel free to check out last year’s winner post!)

We’ll keep these comments open until Thursday, August 11th, at 12PM Eastern Time to accept initial nominations.  We’ll count up and sort the votes, and soon after that, we’ll start the preliminary voting polls.