You Win or You Die: Telltale's Game of Thrones "A Nest of Vipers" - Review | Watchers on the Wall | A Game of Thrones Community for Breaking News, Casting, and Commentary 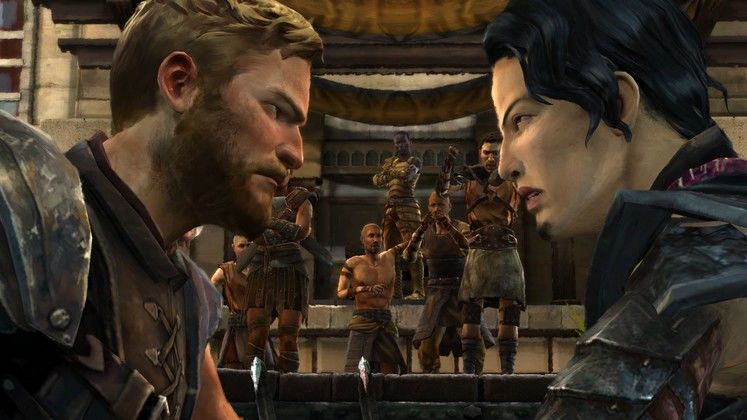 Telltale’s Game of Thrones epic series is nearing a close as the penultimate episode packs more than a few punches. Rodrik faced off with Ramsay, Mira got between Tyrion and Cersei, and Asher finally returns to Ironrath in “A Nest of Vipers”.

Full spoilers for the episode under the cut!

The episode opens right where we left off in episode 4 with Ramsay intruding House Forrester’s hall and intimidating Talia. Considering last time Ramsay was in this location he murdered her twin, we can be a little apprehensive as to why he’s here. Turns out he’s heard what we’ve done with Gryff Whitehill and he isn’t pleased.

He leads you and Talia into the forest as we come upon Arthur Glenmore who’s in the infamous Bolton-flaying pose. Talia is mortified and Rodrik is enraged (as I was). Ramsay goes on to taunt you saying “you’d like to kill me…wouldn’t you?” (f*ck yes!) and he even offers you his blade to stab him…

This brings us to our first choice in the game: stab Ramsay or not. 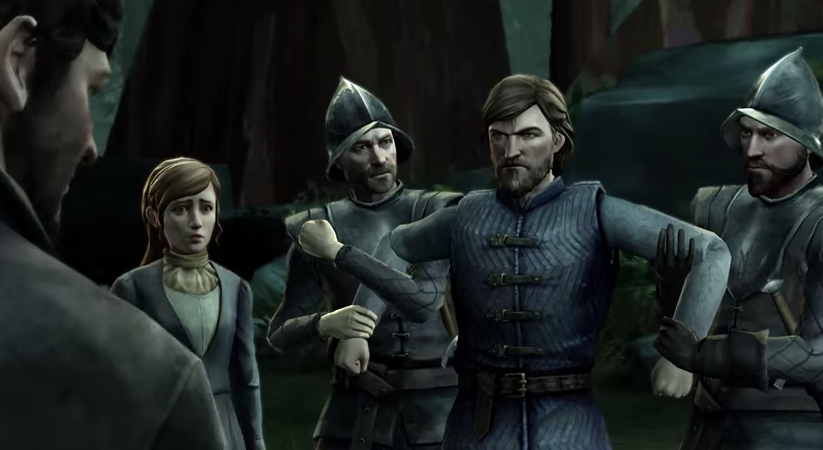 As satisfying as it would’ve been to stab him, our knowledge of the show and ASOIAF universe reminds us that we are not in control of Ramsay’s fate. A sullen and even a tad frustrating detail but Iwan Rheon’s voice acting nonetheless brings Ramsay’s sadistic nature to life.

When I received my results, I wasn’t shocked to see that I was in the majority of those who chose not to stab Ramsay (67%) as many have surly picked up on the above detail.

For those who want to see what happens when you do stab Ramsay, click here!

Ramsay then guts Arthur forcing Talia to watch (even if you try to shield her) proving that his sadism has no bounds. He tells you after that he is no longer apart of this house vs house battle and is instead leaving it to a “last house standing”. Rodrik vows it will be House Forrester. As the cart is wheeling away Arthur’s mangled corpse, his sister Elaena (and your betrothed) arrives and is horrified to see what has become of her brother. After a few exchanges, you are given another choice: to console Elaena or not. If you choose to, you two are intertwined as one…until Talia arrives.

Talia is embarrassed, naturally, but nonetheless has important news for Rodrik regarding the traitor. She has fulfilled her task in discovering their identity and has even found the documents he’s been smuggling to the Whitehills detailing your every action as lord. She vows to tell you the identity only if you promise to kill them leaving the decision up to you.

Next we are thrown into the fighting pits with Asher as we fulfill our role by finding an army to fight for House Forrester. This was one of my favorite parts of the episode as the combat felt smooth and genuine. I also really liked the character Bloodsong and his fighting style was unique to the game (and a nice yet subtle throw back to The Red Viper). You are given another choice once you have Bloodsong at your mercy: spare him or kill him. 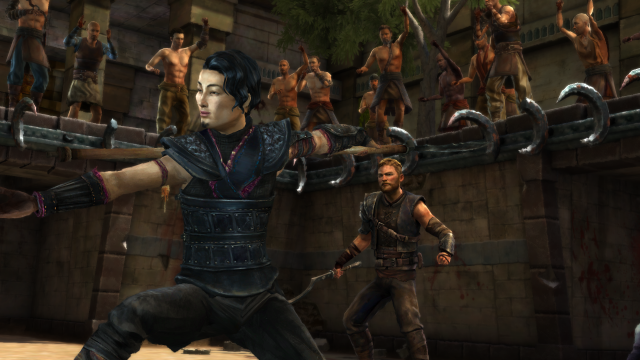 If you spare him, he’ll join your forces. If you kill him, you stab him through and the pit fighters are impressed. However, if you spare him, they’re still impressed by your speech and join you anyway so sparing him is really in your best interests. I was again in the majority by sparing him (62%).

Meanwhile the events North of The Wall and at King’s Landing play smaller yet significant roles in this episode. Mira has been tasked by Cersei to find out who Tyrion plans to use as witness for his trail. You are given another choice: tell him Cersei’s intentions or lie. I was again in the majority that tried to lie (64%) but alas, Tyrion’s wits sniffed us out.

Up North, Sylvi hesitates to go farther North and we have our first confrontation with the wights in an action packed sequence to fight to survive. You burn the wights with no casualties and proceed to find The North Grove. After getting some information from Sylvi regarding the North Grove, our curiosities only continue to grow as to what lies there (an ice dragon, perhaps?). 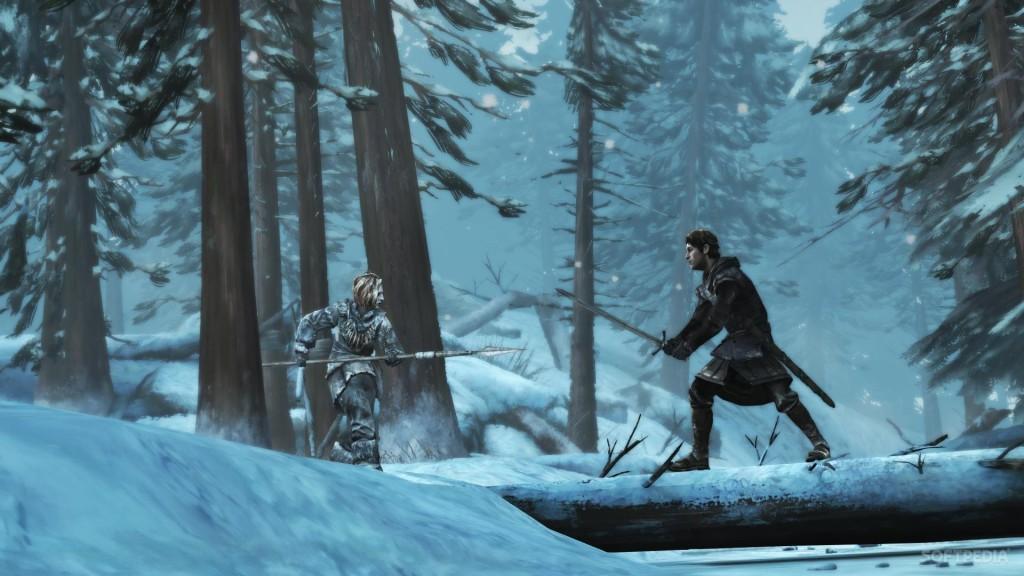 Back at Ironrath, we have found our traitor. Depending on who you chose as sentinel, it will either be Duncan or Royland. I chose Royland so I felt having Duncan as the traitor felt more organic than if it were Royland. I didn’t hesitate to run him through (as promised, Talia) ignoring his warning of the ambush to come. I was a bit shocked to see the results to evenly divided (50% choice to spare him as the other chose to kill him).

Finally, the conclusion was the most heart-wrenching decision to make as of yet. Asher makes his homecoming with his formidable force of pit fighters behind ready to for war. We are hopeful that we actually might win this war against the Whitehills until the ambush strikes. As the majority of your force leaves the hold, the Whitehills close the gate behind leaving only the Beast, Asher, and Rodrik to deal with the Whitehills. The Beast does his best to open the gate but is thwarted and it’s up to Asher and Rodrik. As one must stay behind to hold the gate open, you have to decide who stays and who will lead the next attack.

Everything slows down and time stands still for a moment as you must make your decision: Rodrik or Asher?

I chose Rodrik and he sure as hell went out with a bang taking out as many Whitehills as possible before meeting his untimely demise.

Again it seemed the audience was evenly divided as 50% choice Rodrik while the other half chose Asher. (Follow the links to see each character’s last stand)

Telltale’s penultimate episode exceeded my expectations and only further whet my appetite for the conclusion. If you need something to pass the time until Season 6, I strongly urge you to play this game. It is faithful to the series, intense, and satisfying in a way only Game of Thrones can fashion.

It is available on PC/Mac, Playstation, XBOX, and on 7/23 will be available on iOS and Android! Its versatility makes it easy for anyone to pick up and play and the compelling narrative makes it hard to put down!

Overall, I’d give the episode a solid 4.5/5 stars! (Again, only downside being Ramsay’s invincibility.)

What did you think of “A Nest of Vipers”? What choices did you make? Let us know in the comments below!