The Writing On the Wall: Violence Is a Disease | Watchers on the Wall | A Game of Thrones Community for Breaking News, Casting, and Commentary 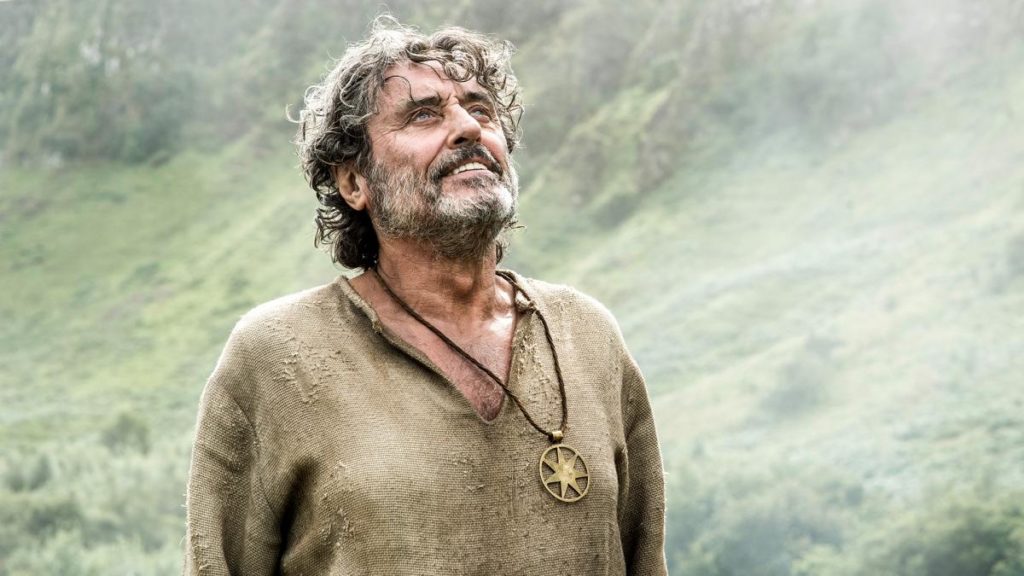 The world of Game of Thrones is a brutal one, there is no denying. It is a consequence of George R. R. Martin’s portrayal of a fantasy world that is more realistic than the one often found in fantastical literature. That reality certainly resonates with audiences, for as many people can tell you, there is often no white male protagonist who will swoop in to save the day. Sometimes the wrong people win, a wedding turns into a horrifying massacre, and an idyllic society is destroyed before it even has the opportunity to begin.

The question of violence is an inherent one to the series and it has existed ever since young Bran Stark (Isaac Hempstead Wright) was pushed out of a Winterfell tower window. Countless debates have been waged as to what the series wants to say about violence, how it depicts violent acts and against whom, and whether or not the depiction in question is actually saying something about violence and its role in our society. How the series overall handles the complexities of violence is another article for another time, but there is a key thoroughfare in “The Broken Man” that asks the question of how one can go about building a nonviolent society in a world that seems to be breaking apart at all seams.

Brother Ray (Ian McShane) is a combination of the Elder Brother and Septon Meribald from A Feast for Crows. He provides a curious case study in what Game of Thrones is perhaps trying to say about the violence it depicts and how it impacts its characters. In his past, Ray was what one would consider to be a consummate sellsword. He did everything he was told in the War of the Ninepenny Kings, be it murdering peasants or setting village homes on fire. He was thought to be a brave mercenary, but he admitted that he was little more than “a coward who followed orders.” 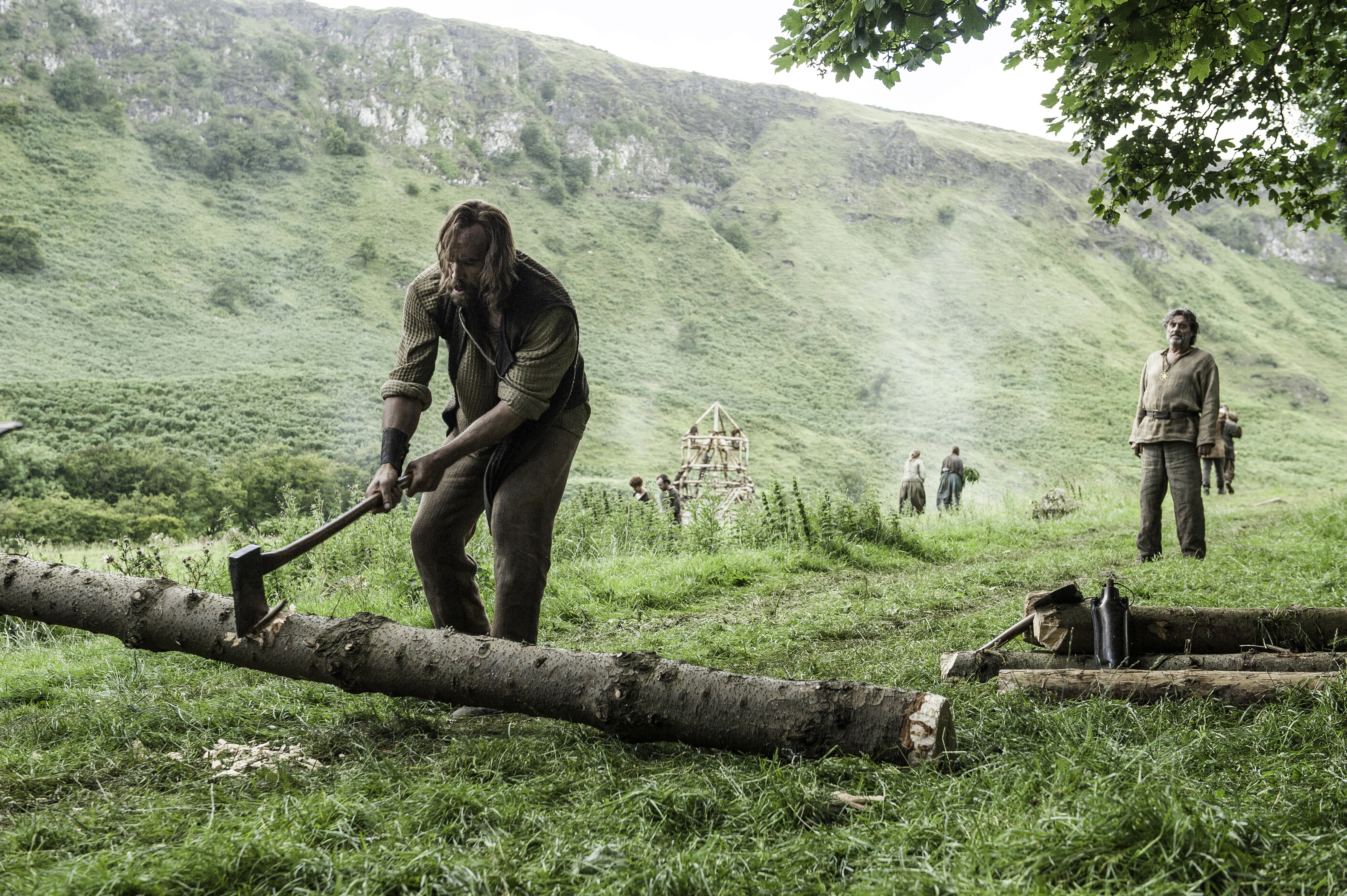 One day he committed a crime that he could no longer justify as having committed under the auspices of it being an order. He cut the throat of a young boy in front of his screaming mother. She was being held back but her screams of terror, grief, and helplessness transcended that physical barrier. Her screams continued to haunt Ray, his sleep seemingly forever ensconced within an unrelenting guilt. He searches for a pathway towards redemption and he finds one in the Faith of the Seven.

He openly admits to the Hound (Rory McCann) that he has absolutely no idea as to who the real gods are – millions could be worshipping the wrong ones for all he knew. What he believes, however, is that the precise organized religion one believes in and whose deity(ies) one worships are the less relevant question. What is more important is the principles of said religion that someone stands for. The principles he believes in are the principles of peace and he recognizes that as long as one is committed to those principles, the methodology of committing to them is not as important.

When the audience meets Brother Ray, he is building what appears to be an idyllic commune amongst the green valleys of the Riverlands. He has a band of followers, each of whom has their own story as to how they found themselves in that commune. It is likely that several of the individuals in Brother Ray’s community decided to eschew the violence engulfing the rest of Westeros and find a home for themselves that was not embroiled in the dynastic wars of wealthy aristocrats. As is often the case with Game of Thrones, that idyllic sense of being only lasts for a brief amount of time. 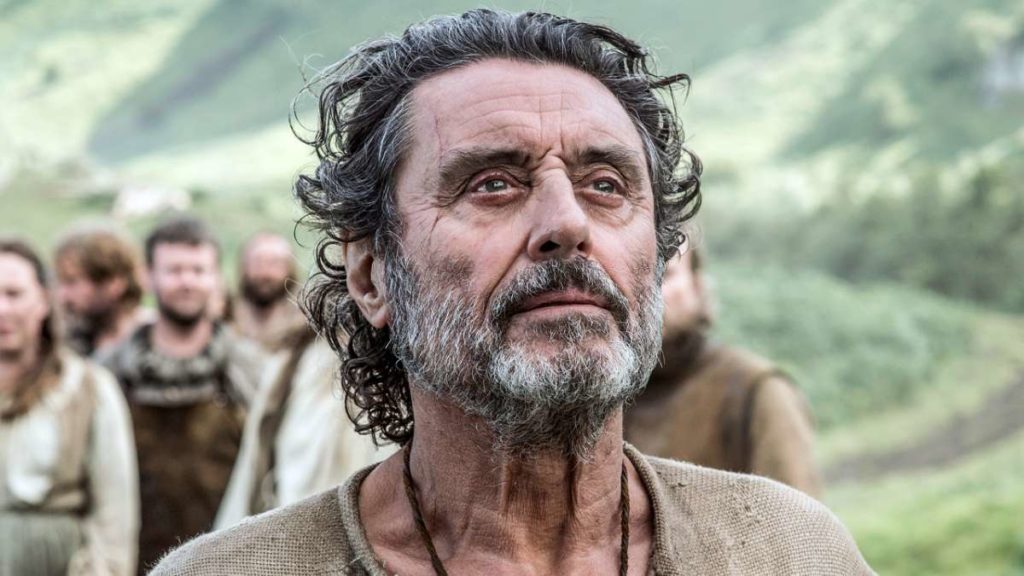 Three riders from the Brotherhood Without Banners arrived with an intent to demand the horses, gold, and or weapons Ray and his community did not have. Sensing an imminent threat of violence, Ray refuses to fight the intruders in spite of the Hound’s insistence, noting that violence is a disease and that spreading it only creates a more violent society in turn. The Hound, embittered by an unarguably difficult life, disagrees.

With the ending to the Hound’s journey with Ray, Game of Thrones offers a much more nuanced story than what may appear at initial viewing. The Hound may leave the destroyed commune with a fervent desire for vengeance, but he is critically wanting vengeance for someone he is calling a friend. He may not let go of the bitterness life has given him nor may he ever adopt Brother Ray’s manifesto of peace wholesale, but there is a part of him that has undoubtedly been changed by the words and deeds of a man whose relationship with violence transformed so radically.

The destruction of the sept and the mass murder of Ray and his community would seem to definitively validate the Hound’s point of view. If they had fought back before the intruders had a chance to regroup, then the commune members perhaps could have saved themselves from their fate. The obvious question of obtaining weaponry and logistics aside, there is another takeaway from this scene that is about more than whether or not the Hound or Ray was right about the implementation and nature of violence.

The larger, arguably more important question, is whether or not it is worth creating a society built on the principles of peace in a world that is chaotic and seems to be unrelentingly evil. Is it worth creating a society, small as it may be, based on the principles of breaking the never ending cycle of violence? Is it worth embracing the principles of peace if butchers seem to be on every path you cross? If the story of Ray is a tragedy, it is also a story of finding redemption through the renunciation of violence. His journey indicates that as far as “The Broken Man” is concerned, in spite of all the obstacles and cruelty in your way, building that society is crucial. However long it may last, it is a break in the cycle of violence and if enough of those breaks come together, then perhaps that cyclical nature of violence can indeed be broken.