The Writing On the Wall: An Indispensable Bond | Watchers on the Wall | A Game of Thrones Community for Breaking News, Casting, and Commentary 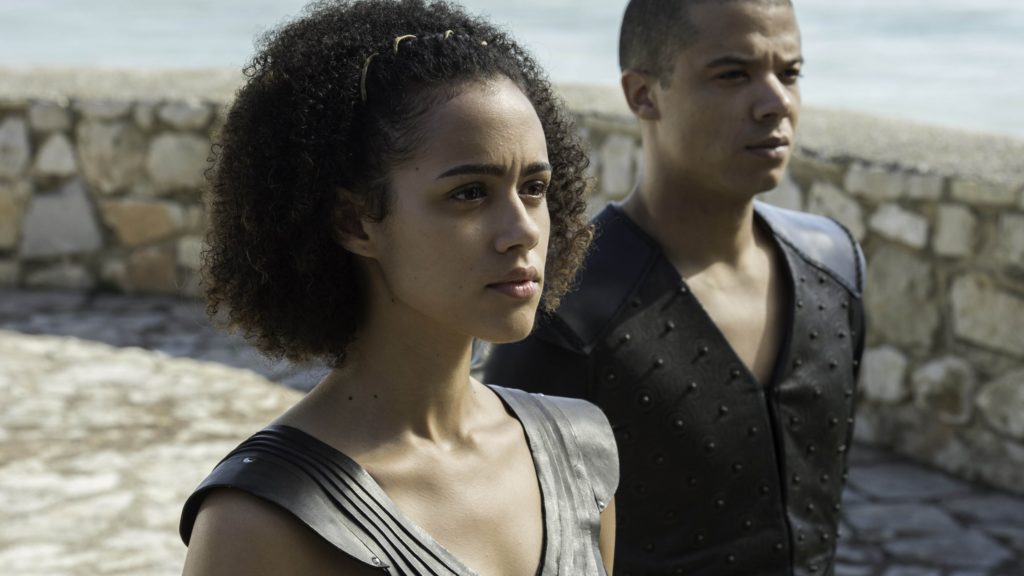 A prevalent reading of Game Of Thrones is that it is defined by misery and the triumphs of unsavory characters. Audiences expect that any decent character is likely to meet a grisly and unforgiving end while those who espouse the more negative aspects of humanity are not just likely to survive, but triumph. The expectation is arguably cemented when Eddard Stark (Sean Bean) loses his head, and is further entrenched when the Red Wedding bloodily unfolds in the damp and dark halls of the Twins.

George R. R. Martin has repeatedly noted his intent of crafting a story that is rooted in a sense of realism and much like the real world, Westeros and Essos are often harsh and unforgiving lands. The common folks are consistently torn apart by feuding aristocrats. The decent are often either cunningly outmaneuvered by the less savory and or simply fall to their blunter instruments. A royal family may be beholden to the desires of a powerful bank. Innocents are stolen away to be sold as the property of another human being.

In spite of their popular reputation at times, neither A Song Of Ice and Fire nor Game Of Thrones are rooted in an unrelenting espousal of nihilism. Joffrey Baratheon (Jack Gleeson) chokes to death at his own wedding, Tywin Lannister (Charles Dance) is assassinated while on the toilet, and Ramsay Bolton (Iwan Rheon) is devoured by his own dogs. It’s justice whose examples can be counted within both hands, but it does exist. Yet that is also justice that is reserved for a few and for many, it simply does not exist and they have to find solitude in other facets of life. 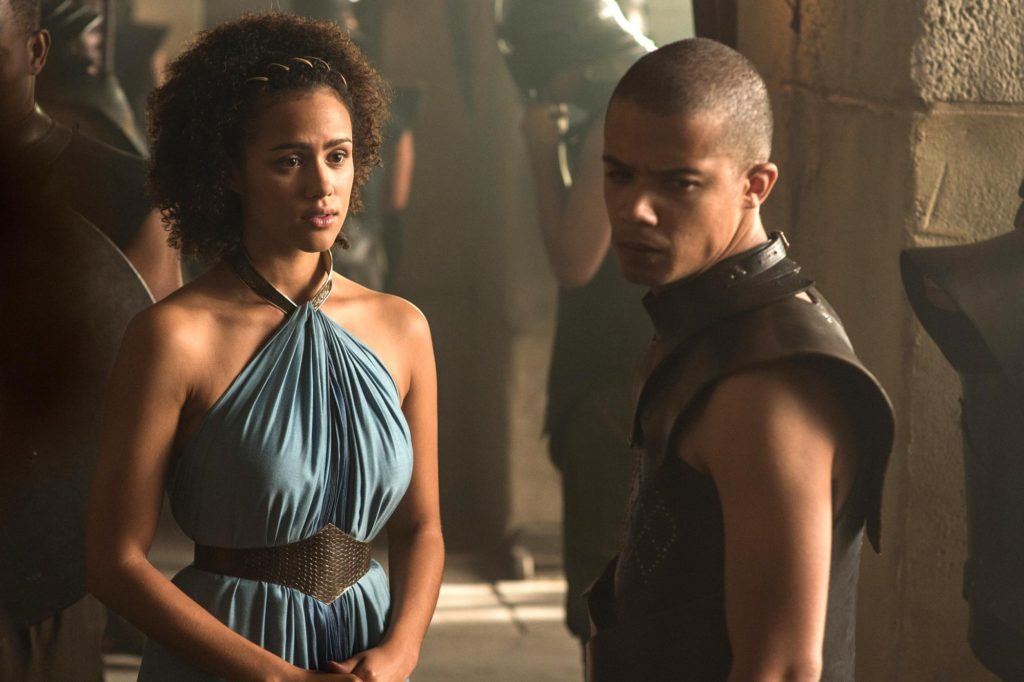 Missandei (Nathalie Emmanuel) and Grey Worm (Jacob Anderson) were kidnapped as young children and sold into slavery, her from the island of Naath and him from the Summer Isles, respectively. They were both taken to the aptly named Slaver’s Bay, her eventually becoming the translator for Kraznys mo Nakloz (Dan Hildebrand) and him becoming a member of the Unsullied under the charge of the Good Masters of Astapor. They both suffered in different ways and for them, it seemed that there would be no justice for the crimes committed against them.

The horrors Missandei endured as a slave woman are never expressly detailed in the adaptation, but one only needs to glance at the plight of slave women in history and today to garner an idea of the suffering she survived. When Tyrion (Peter Dinklage) negotiates with the slave masters from the great cities of Essos, for example, Missandei’s calm and collected demeanor breaks for the first time and we see the undercurrents of anger, grief, and resentment echoing across her visage. She looks upon the disaffected faces of those three men and sees the resurfacing of her trauma, abuse, and pain.

Grey Worm suffered through the horrific system that created and perpetuated the Unsullied. The Unsullied are castrated in order to prevent any of the weaknesses that are associated with love and sexual intimacy (that the penis is seen as the primary arbiter of both of those paradigms says quite a lot). The Unsullied are forced through their training to let go of every bit of emotion that they espouse and to prove that they have indeed done so, they must slaughter a slave infant in its mother’s arms and repay her with a coin, for her master. 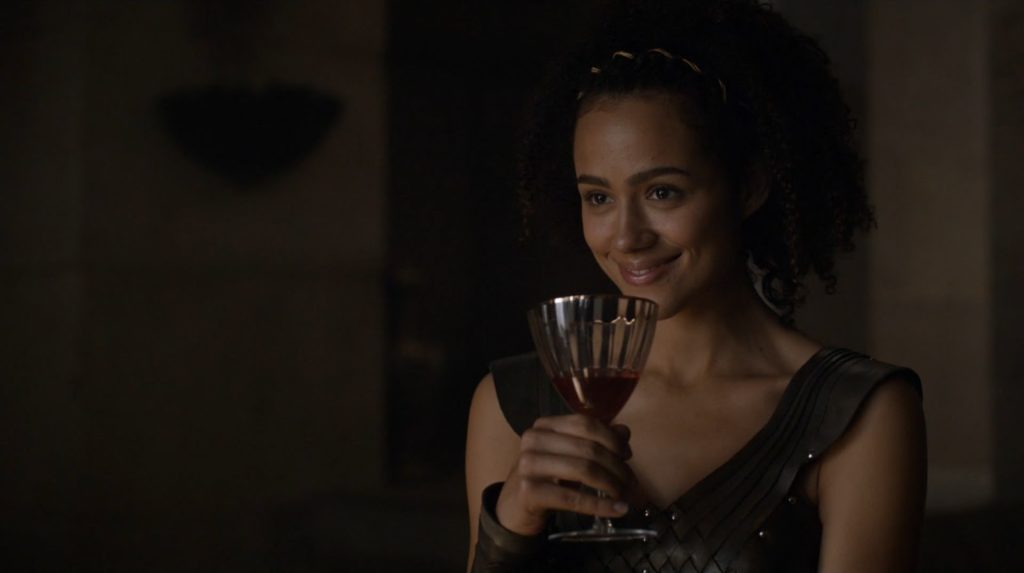 If the realistic depictions of injustice and justice are necessary for the realism of the narrative to take hold, one can argue that the depiction of people finding small moments of joy and solace are just as critical, if not more so. We don’t often come across examples of justice in our lives and in a world that is ubiquitous with darkness, it is often a matter of not just desire but also necessity to find comfort in the small things and personal connections.

Missandei and Grey Worm have suffered traumas that few, if any, other characters in the series can contemplate, for slavery is more insidious and deep than many realize. A core tenant of slavery is the stripping away of identity, of ensuring that slaves never make the error of thinking of themselves as an individual and not property. Once that paradigm of power is established, there is no limit to the horrors and crimes that can be committed against slaves because they are no longer viewed through the lens of humanity. That empathetic link is critically broken.

When Missandei and Grey Worm meet each other’s eyes in “The Mountain and the Viper,” it is more than a sexual moment where the two characters are exposed to each other sans clothing. It is a moment of deep intimacy where two people who were for so long denied their individual identities felt those shackles quietly but powerfully breaking apart. For once they could look into each other’s eyes and find a genuine desire to connect and belong. 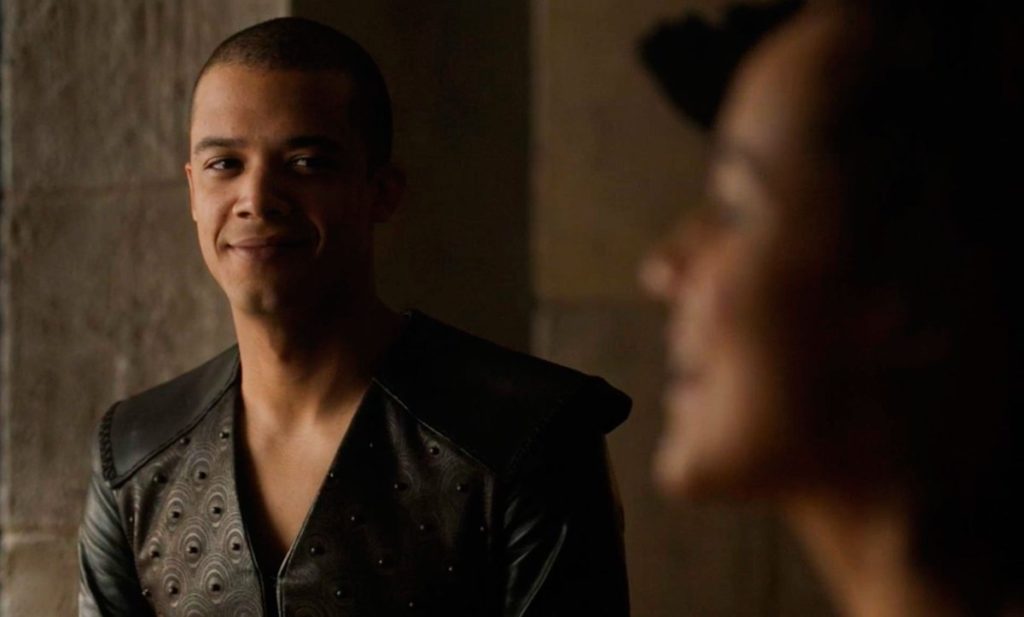 Their relationship began to blossom when the two discover that their stories, while radically different in many ways, shared an underlying thoroughfare of being stolen from their island homes and sold into this unforgiving, inhumane system of slavery. Here at last, each of them thought, was someone who would not just listen but understand. To find someone with whom you can forge such a deep connection is meaningful, especially when it seems that the world around one’s self is collapsing with a reckless abandon.

Missandei is at first surprised when she discovers Grey Worm gazing at her bathing in the stream, but she allows him to see more of her before she leaves. When he arrives afterwards to apologize, Missandei notes that there is no need, expressing an added sympathy over his castration. Grey Worm quietly notes that if he hasn’t suffered, then in all likelihood he wouldn’t have come to meet her. Missandei is touched as she sees someone like herself, someone who has not only survived significant trauma but found a way to see the small beauties in life.

In the alleyways of Meereen, Grey Worm is gravely injured in an ambush by the Sons of the Harpy. Missandei is terrified for his life and afraid that the connection they had forged would be so brutally broken. When he awakens and finds her by his bedside, he confesses that in the true Unsullied fashion, he was never afraid of dying but he was afraid that if he died, he would never see Missandei of Naath again. Moved, Missandei leans down to give him a kiss. 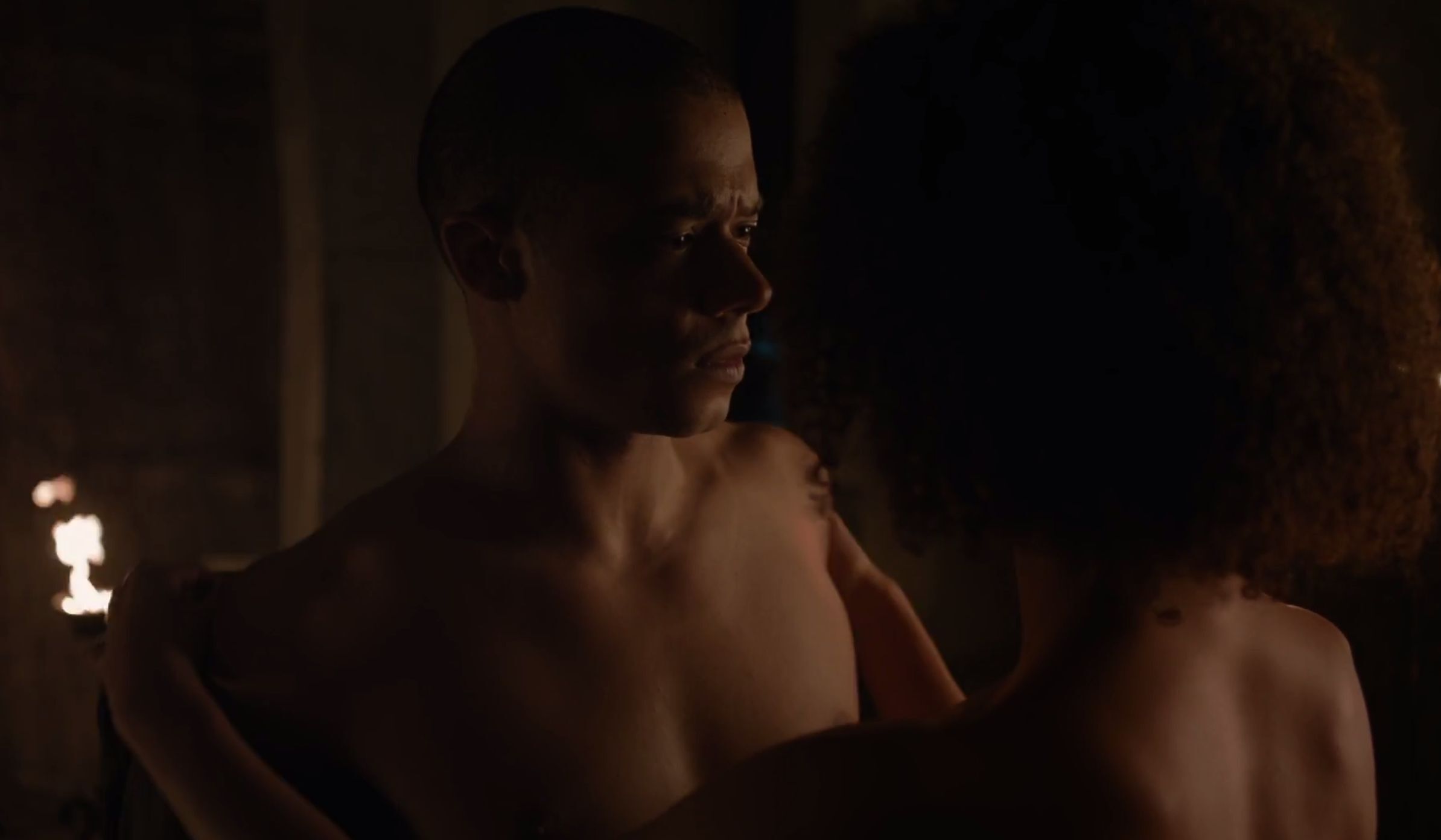 In “Stormborn,” their flirtation reaches a beautiful consummation that was emotionally and dramatically earned on account of the time and effort the story had put into making their connection resonate. It happened in part because the two were aware of the real risk that Grey Worm would die on his mission to take Casterly Rock, but the emotional impetus was already there. The sex scene that unfolds quietly and slowly, allowing for both characters to show each other who they are in their most vulnerable state. That active choice represents a powerful decision for the two of them, considering that they have been forced to be vulnerable for so much of their respective lives.

While some have found the romantic connection between Missandei and Grey Worm to be an unnecessary distraction, their connection is critical to what Game Of Thrones is about: the conflict of the human heart and how our decisions in regards to those internal conflicts shape us to become who we are. That perhaps doesn’t sound as thrilling as dragons, wolves, and White Walkers, but that is in part because the complexities associated with human emotions have not received the critical discussion they are due.

Writing clicks when it is able to connect with an audience, whomever that audience may be; and it is able to connect with the audience in question when it finds meaningful character beats and stories that evoke our everyday emotions, if not experiences. We may ostensibly be fighting for justice in different ways and to empower those who lack the access to be able to use their voice. But we cannot continue fighting for what is right in an increasingly horrific world without those small moments of joy and meaningful connections, romantic or otherwise.

The dragons, wolves, and White Walkers are arguably indispensable to Game Of Thrones. The various battles for the Iron Throne and the machinations they involve are the bedrock upon which this series grew. The politics gave the series depth. Just as valuable, if not more so, are the personal connections and relationships characters form with one another. Missandei and Grey Worm show us that in spite of all the traumas, suffering, and despair, we can survive and even thrive by finding joy and support and that is an indispensable reminder all of us can use.