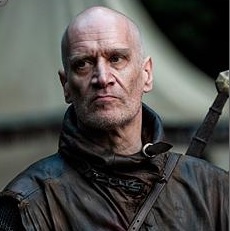 It looks like we may not have seen the last of Ned Stark’s executioner on Game of Thrones.

Fans last saw Wilko Johnson as Ser Ilyn Payne, the tongueless knight in service to the Lannisters, in the season 2 finale, “Blackwater.” Johnson stepped away from the show after being given a terminal diagnosis of pancreatic cancer.

Two years later, the musician and actor has undergone life-saving surgery to remove a tumor, and according to a friend, is now considering a return to Game of Thrones.

Yesterday, journalist Charles Shaar Murray posted on Facebook about visiting with Wilko, and reported that he’s in good spirits and speculating about a GoT comeback when he’s more recovered.

Yesterday: a lovely Sunday afternoon by the seaside… to be precise, hanging out with Wilko Johnson and a bunch of his mates… Wilk’s still in the comparatively early stages of recovery from his massive life-saving surgery, but he’s in good spirits (though he’s no longer drinking any), working hard to rebuild strength and stamina, itching to resume maltreating Telecasters (guitars) in public and even speculating on returning to Game of Thrones once Ser Ilyn Payne is no longer ill in pain and he’s strong enough to wield the Big Sword once more. And he thanks all y’all for the good vibes.

Sue the Fury says: Fantastic news that Johnson’s surgery has been a success, and we wish him the best of luck in his continued recovery. Of course, I’d love to see him back on Game of Thrones someday. There’s certainly unfinished business, with Ilyn Payne on Arya’s death list.