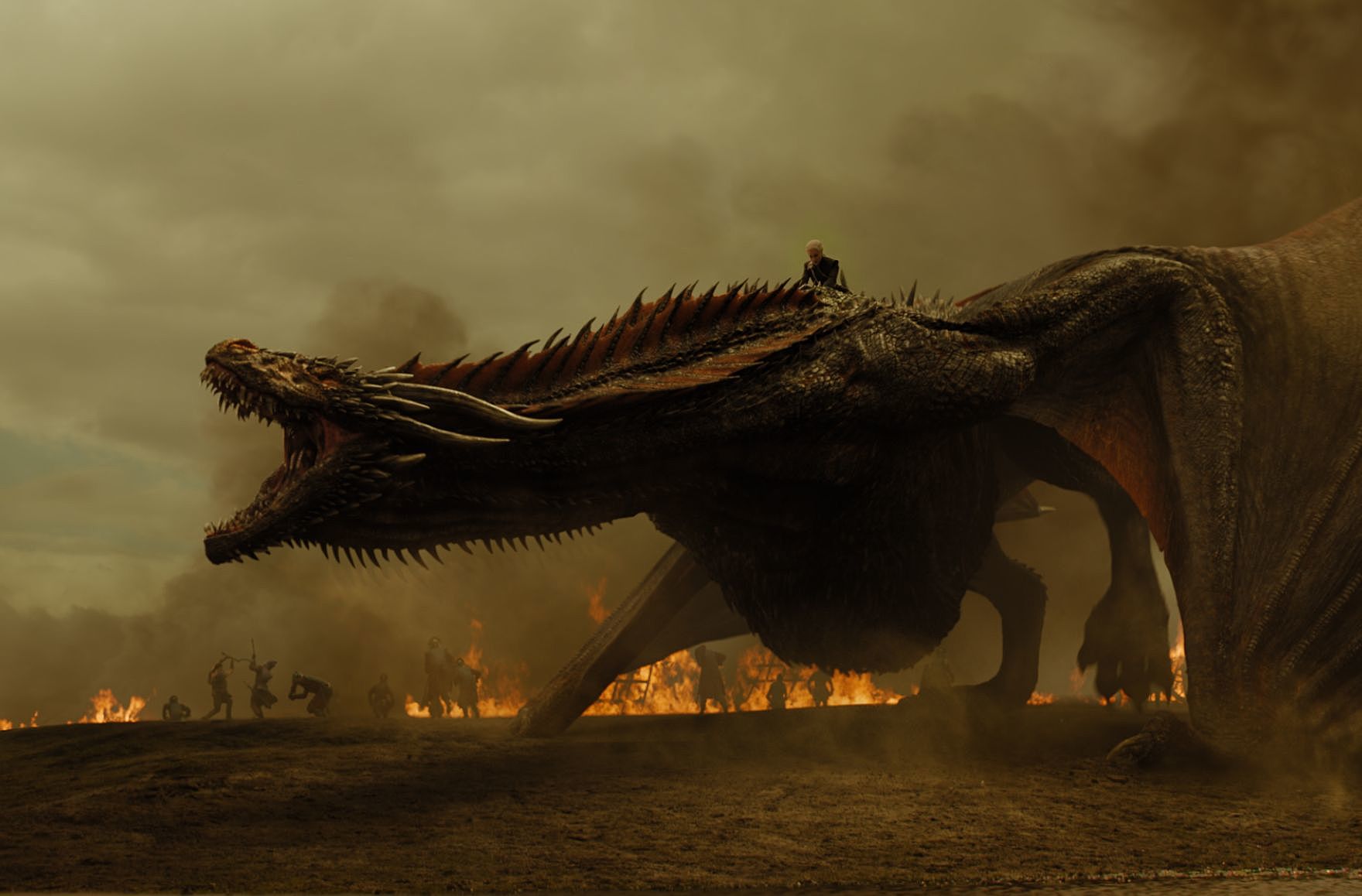 I was lucky enough to attend HBO’s Game of Thrones DVD fan screening of the incredible epic that is Game of Thrones episode 704, ‘The Spoils of War.” I, along with a good friend of mine and some very lucky fans, were treated to a mini-exhibition of sorts, all within the comforts of an NYC movie theatre. Sue the Fury was kind enough to let me take over the Watchers handle on Twitter, so head over there to check out the play-by-play of the evening. There was a whole lot packed into a two-hour period! 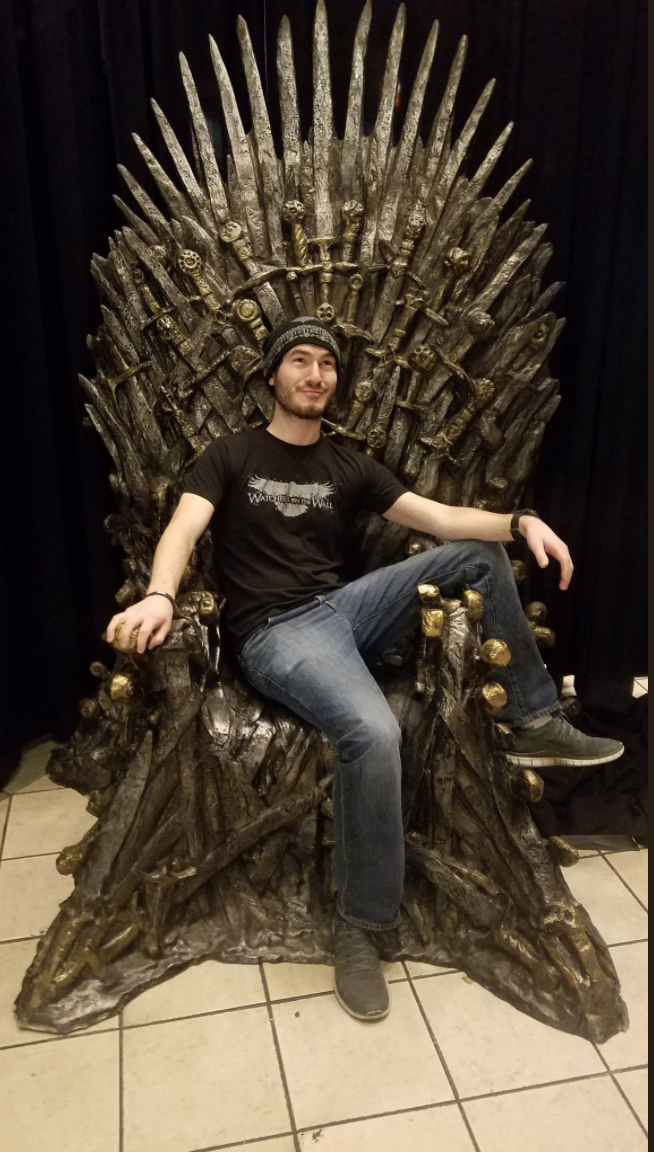 The Iron Throne, ladies and sers, was the first thing we saw when we entered the theatre. Naturally, I couldn’t resist…

Once we had checked in, we had to stop to admire the fully hand-painted map that lay before us, a replica of Dragonstone’s Painted Table: 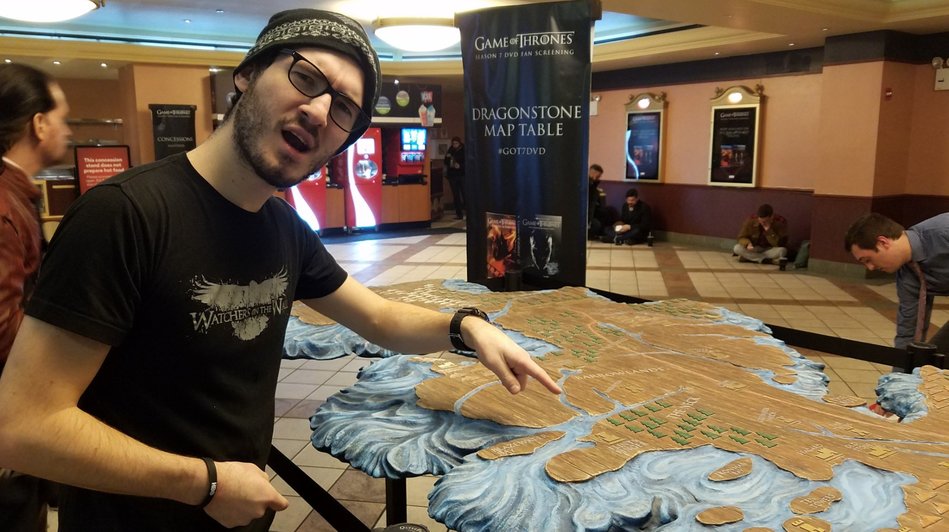 Then, we noticed the gallery of high quality of pictures on the wall. I like to root for the good guys, so here’s a little snapshot I edited together, alongside Robb’s sword: 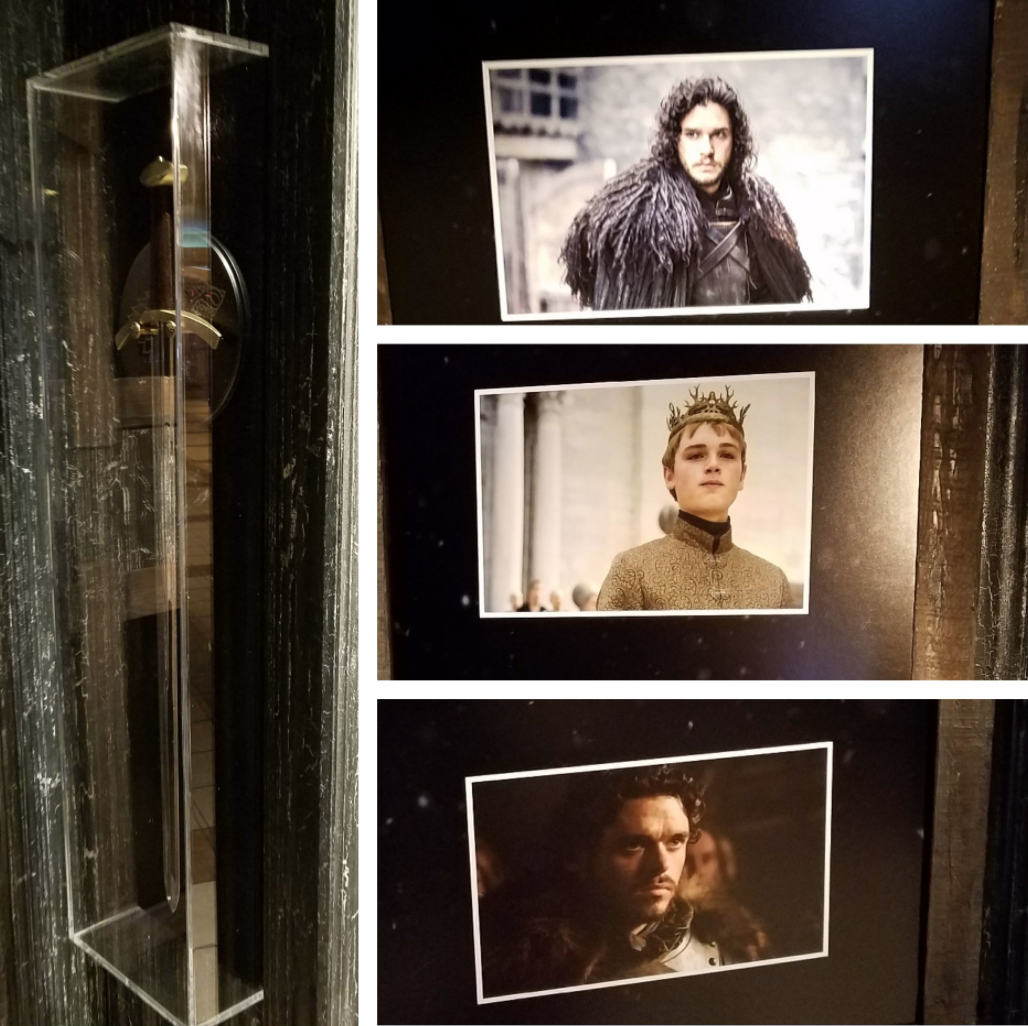 But here’s where we found ourselves at a bit of a crossroads. The curators of this mini museum decided to position Margaery and Stannis adjacent to one another. My friend Frank and I had differing opinions on who should really sit on the Iron Throne: 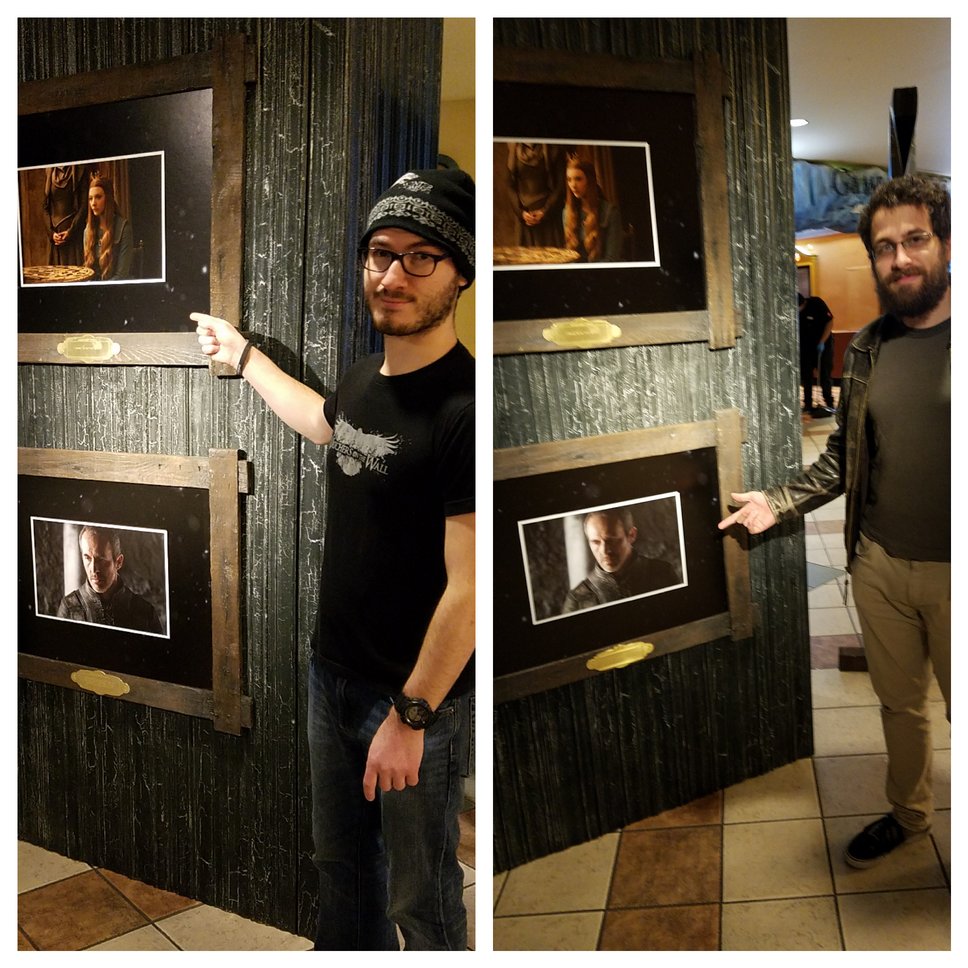 Lastly, it came time for the main event. Not like we were excited or anything: 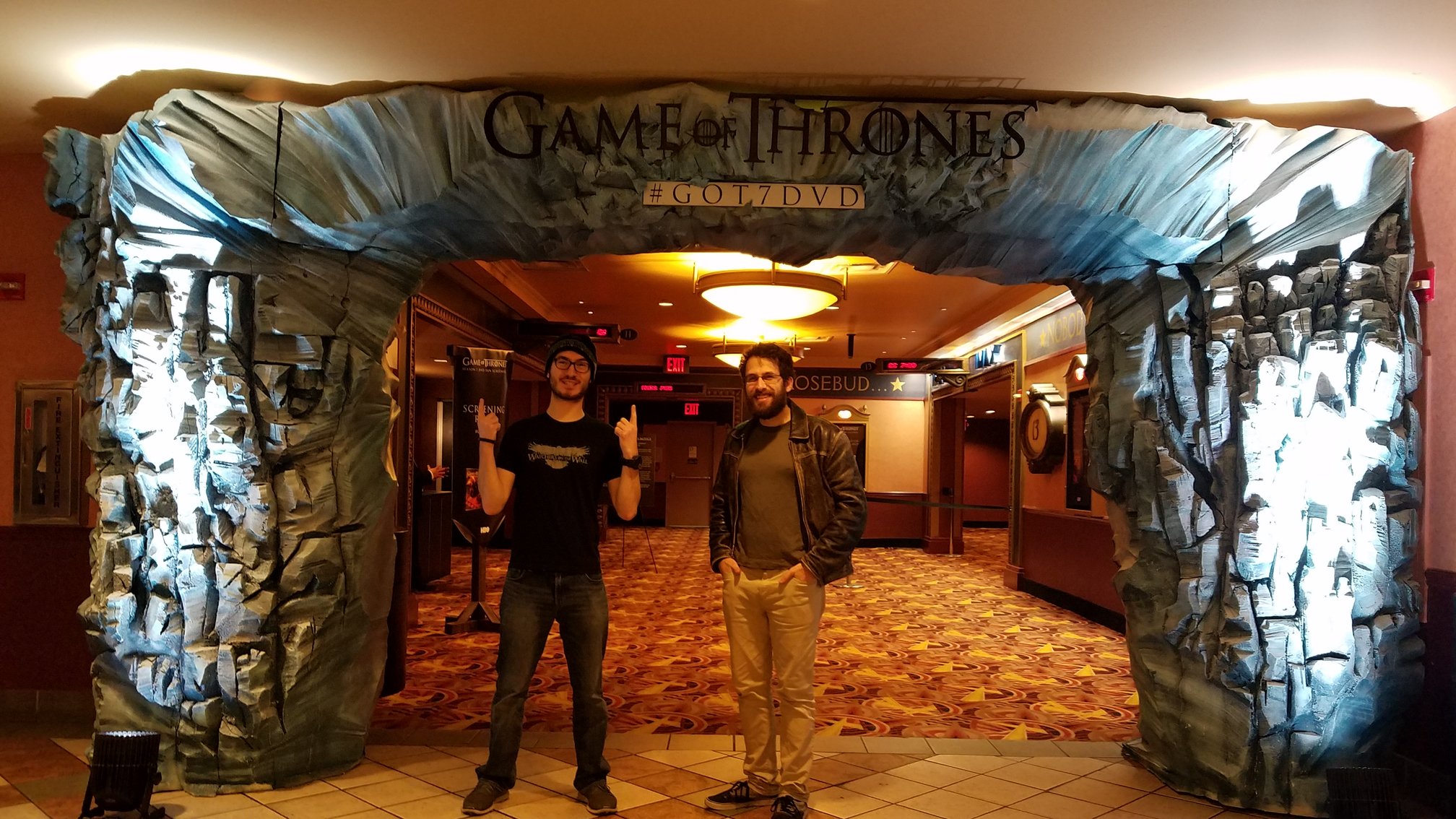 The season 7 sizzle reel, a 5 minute overview of the season, complete with cast interviews, crew insights, and the Game of Thrones title sequence including commentary from Lena Headey (Cersei), Kit Harington (Jon), and David Benioff (showrunner/executive producer) – it was rather amusing and a great warm-up for the evening.

Next up were 10 animated chapters of Conquest and Rebellion, a special premiere of a DVD/Blu-ray extra. It’s a thorough overview of the history of Aegon The Conquerer’s escape from Valyria 12 years before its doom, and his bloody journey towards uniting the seven kingdoms of Westeros. I must confess, I am not the greatest at historical Westeros trivia, but wow was this exciting for both of us. My friend Frank is a super casual viewer but he enjoyed the histories as much as I did. The narration was read by Conleth Hill (Varys), Sophie Turner (Sansa), Nikolaj Coster-Waldau (Jaime), Pilou Asbæk (Euron), Aidan Gillen (Littlefinger), and, in a surprising return, Harry Lloyd (Viserys). Each of them read over different parts of history, but the narrative was largely driven by Harry Lloyd, as he detailed Aegon’s rise and the lasting legacy of House Targaryen. It was great to see (well, hear) Lloyd get such time in the spotlight considering Viserys’ demise was arguably the first big character death of the entire series.

Last up was the episode ‘The Spoils of War” to bring us home. What more can I say about one of the all-time iconic episodes of Game of Thrones other than HOLY CRAP THAT WAS AWESOME ON THE BIG SCREEN?! For me, the best part of it all was that my friend was probably the only person in the theatre who had not seen the episode (he’d seen episodes 1-3 prior), so watching his reactions was a pleasure for me. When it ended, and Jaime was sinking to the depths below, he said “Wow. I guess I should probably get around to finishing season 7.” And hot damn is he right. Watching this live brought me back to the first time I saw the Battle of Helm’s Deep on the big screen – it just looked that damn good.

What a night. What a show. Queen Daenerys over and out. 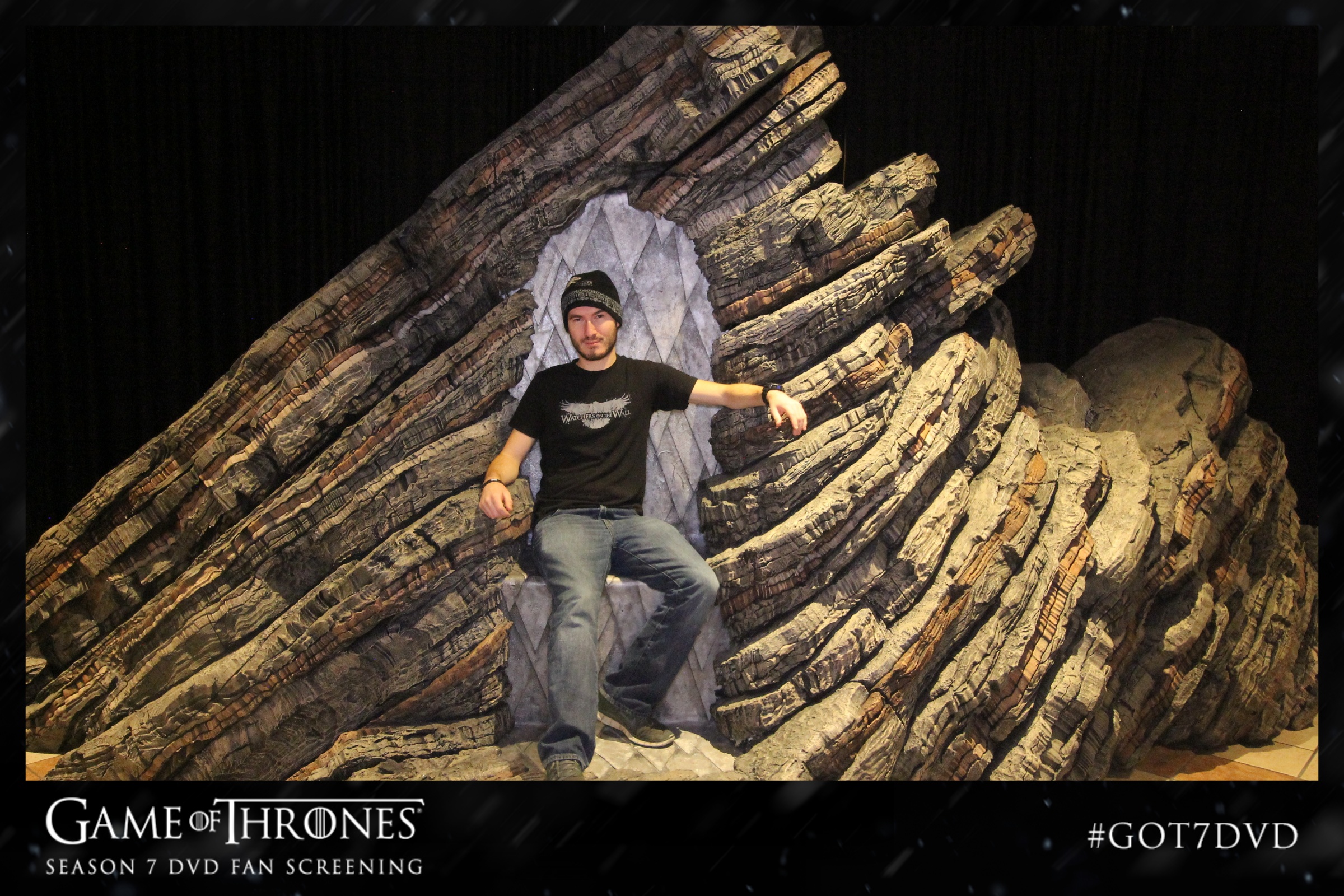 Game of Thrones: The Complete Seventh Season is available now on Blu-ray, DVD and Digital Download!

Be sure to enter our giveaways to win a copy of the Game of Thrones Seasons 1-7 Box Set, and one of three copies of the Complete Seventh Season on Blu-Ray!