Watchers reviews Game of Thrones: The Complete Collection Collector's Set on Blu-ray! | Watchers on the Wall | A Game of Thrones Community for Breaking News, Casting, and Commentary 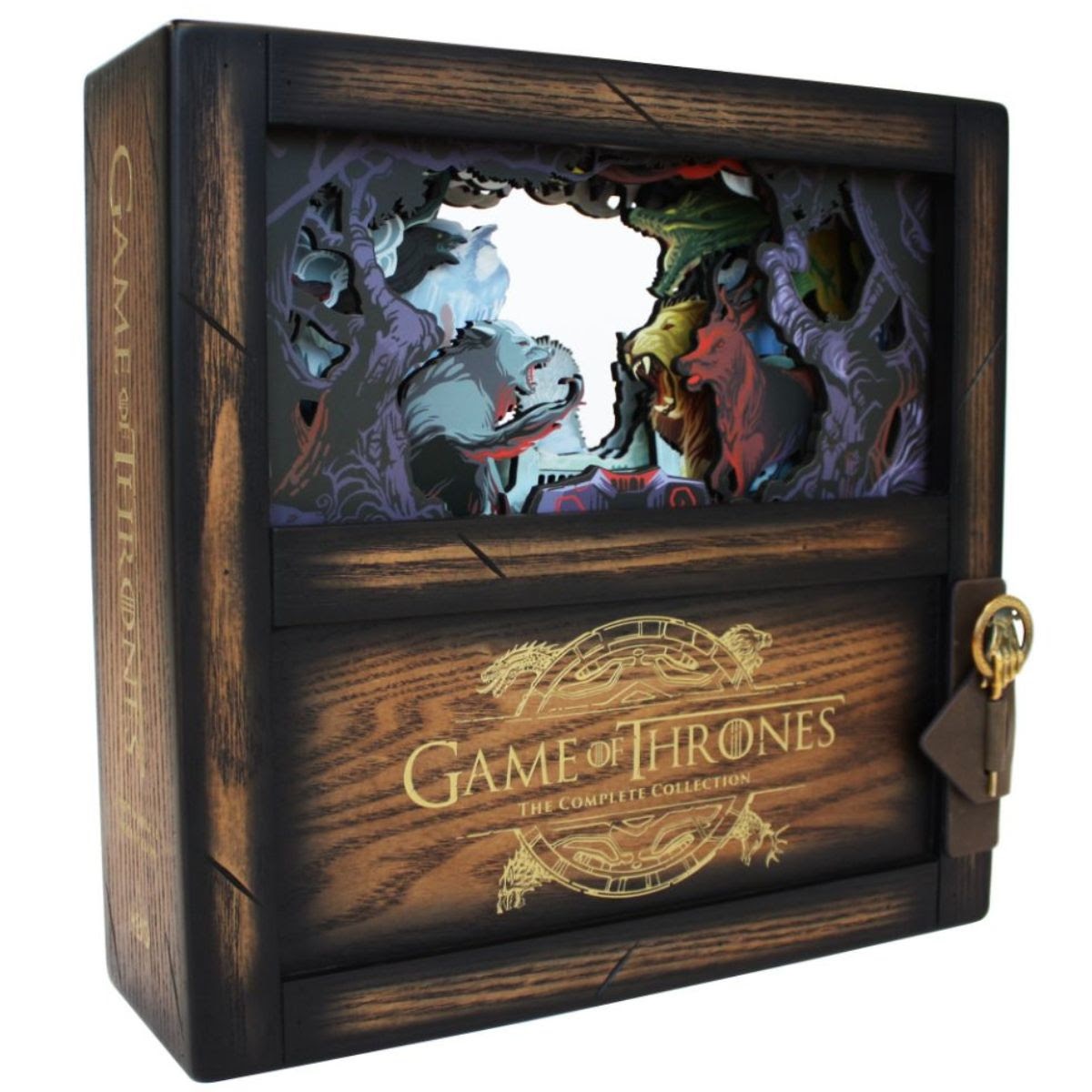 The home release of Game of Thrones Season 8 landed this December, just in time for the holiday season! HBO was kind enough to send Watchers on the Wall a copy of Game of Thrones: The Complete Collection Limited Edition Collector’s Set for review, so we were able to get a close-up look at the ultra-premium Blu-ray set that includes every season and a host of special features. Does it live up to the hype? Let’s find out!

The Complete Collection exclusively features the Game of Thrones: Reunion Special, a two-part reunion show with cast members from the final season including Kit Harington, Emilia Clarke, Sophie Turner, Sean Bean and many more, and is hosted by Conan O’Brien. The set features additional bonus content including all-new deleted and extended scenes, animated histories and lore pieces, behind-the-scene featurettes, audio commentaries and the documentary Game of Thrones: The Last Watch.

My first impression of this Collector’s Set was the sheer size of it. The box is HUGE for a Blu-ray set, 13 x 13 x 5 inches. I wasn’t expecting that, just going off the photos of The Complete Collection. And hot on the heels of that was the impact of the beauty. It’s apparent a great deal of thought went into the concept of this Collector’s Set, and the work paid off. The overall packaging is beautifully conceived, with illustrations provided by Robert Ball, best known for his work on the well-loved Beautiful Death series for Game of Thrones. The collection is uniquely housed in a wooden shadow box, filled with Great House sigils, settings and the Iron Throne itself. A Hand of the King pin seals it closed as needed for a rich touch. The shadow box lends the feel of a story unfolding, rather than being just another pretty disc holder. This really is a collectible.

Game of Thrones: The Complete Collection Bonus Features Include:

• Game of Thrones: Reunion Special: A reunion show shot live in Belfast with the cast, both past and present, hosted by Conan O’Brien and available exclusively on these complete series collections. The reunion special is assembled in segments focused on Houses Lannister, Stark, & Targaryen and concludes with the key players all onstage for their final reflections on the years they shared in Westeros and Essos.
• Bonus content and retail exclusive videos from previously released individual season box sets, totaling more than 15 hours of extra materials for fans to explore when they’ve finished watching the series.

• Game of Thrones: The Last Watch: A documentary featured on DVD in two parts by filmmaker Jeanie Finlay chronicling the making of the final season.
• When Winter Falls: Exclusive 30-minute featurette with showrunners David Benioff and D.B. Weiss, along with major stars and behind-the-scenes players, breaking down all that went into the colossal filming of the “Battle of Winterfell” in Season 8, Episode 3.
• Duty is the Death of Love: A compelling look at how the team behind Game of Thrones and its major stars, including Kit Harington, Peter Dinklage and Emilia Clarke, brought the show to its conclusion in the series finale, “The Iron Throne.”
• Audio Commentaries: Audio Commentaries with cast and crew, including the show’s creators, Benioff and Weiss, on the final season.
• Deleted and Extended Scenes: 5 never-before-seen deleted or extended scenes from season 8.
• Histories and Lore: New animated pieces giving the history and background of notable season 8 locations and storylines.

As you can see from the clip above, the Reunion Special is a breezy treat, with footage from the earliest years destined to tug at your heartstrings and have you reminiscing. The cast are clearly good friends, and family at this point, and have truly been on a journey together. I don’t know that it adds a lot of deep insight into the show at this point but it’s just nice to see them together once again, and Conan O’Brien has always been very good at working with the cast of GoT. An edgier moderator might’ve pushed them harder but that’s clearly not what they were going for in this loving look back on ten years together.

The six Histories and Lore in the final edition are all excellent in quality of production, as always, though somewhat lacking in variety, with Conleth Hill (Varys) narrating four out of the six. Swing by our post where we debuted “The Greyjoy Rebellion” for a sneak peek of that clip!

When it comes to the Histories narration and the audio commentaries choices, I understand that the choices often depend on practical availability/scheduling, so that may partially explain the odd choices. I think fans will agree we would have loved to see more people in the mix on the audio commentaries (line-up in this post).  The technical commentary provided on “The Long Night” is fascinating and valuable, but a separate commentary from the actors also would’ve been amazing.

There’s a stack of bonus featurettes, fun deleted scenes, and interviews on the discs to shore up any minor weaknesses though, and Thrones Blu-rays have always operated on another level. Nothing else compares.

Rewatching The Complete Series on Blu-ray leaves no doubt that Game of Thrones is a monumental achievement. It doesn’t surprise me one bit that we’re all so passionate about it, from beginning to end.

Game of Thrones Season 8 on DVD/Blu-ray & 4K Ultra HD and Game of Thrones: The Complete Collection are available now in stores and online retailers everywhere.