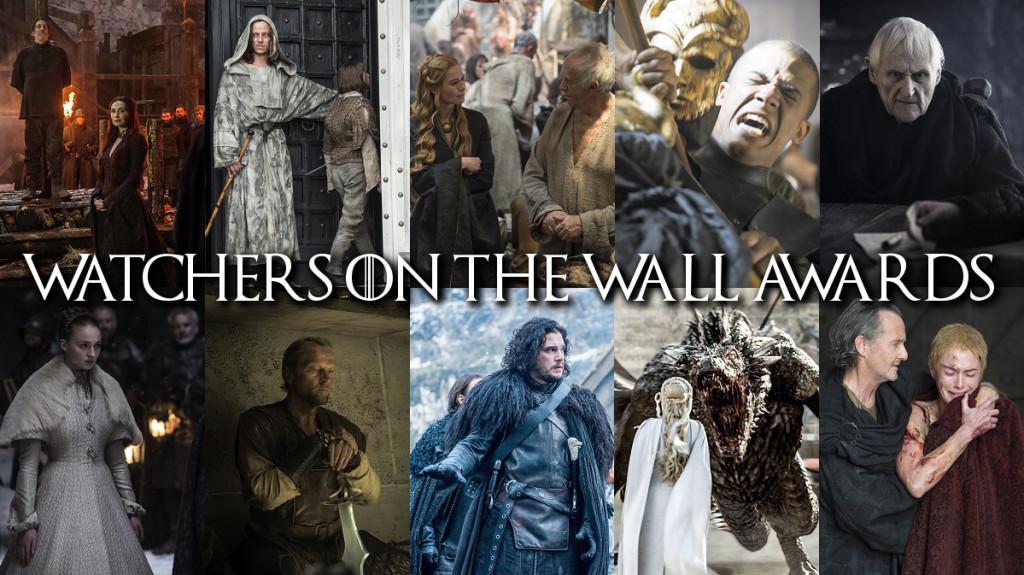 We’ve reached the end of a very long road in the Watchers on the Wall Awards- the initial suggestions, the preliminary rounds of voting, and now weeks of finals. Thousands of votes have been cast in order to arrive at this point, along with plenty of discussion and debate. It’s safe to say that the fans are passionate in their opinions when it comes to Game of Thrones and season 5.

But we’re here, at the very last category for voting: Best Episode!

All episodes go into the final round of voting. We’ve included episode summaries in order to help refresh your memories and making deciding your vote easier. Let’s take a walk down Season 5 memory lane…

A flashback shows us young Cersei and her glimpse of the future. Tywin’s death shakes up King’s Landing and the Lannisters, and Lancel and Kevan return. In Pentos, Varys reveals a new path to Tyrion. Loras spends more time with Olyvar, and Margaery cautions him to be more careful. Daenerys struggles with a new threat in Meereen that attacks her soldiers, and sees again that she cannot control her dragons. Sansa and Littlefinger leave Robin behind in the Vale and journey onward. Jon Snow is unable to convince Mance to bend the knee, and the King-Beyond-the-Wall is executed.

Arya arrives in Braavos and finds difficulty gaining entry into the House of Black and White. Tyrion drinks his ways to Volantis, conversing with Varys in their comfortable box. Brienne and Pod encounter Sansa and Littlefinger, and the meeting doesn’t go well. Cersei receives a threat to Myrcella and Jaime vows to handle the situation, inviting Bronn along for the journey. Ellaria demands vengeance but Doran Martell remains resolute. Shireen teaches Gilly how to read and the wildling girl reminisces about her sisters’ greyscale. Cersei heads the Small Council; Kevan denounces her and leaves the city. Daenerys is conflicted when a Son of the Harpy is captured, and even more so when her adviser Mossador turns vigilante on the offender. Stannis offers to legitimize Jon and make him Lord of Winterfell, but the Night’s Watch election happens, and Jon is named Lord Commander.

Arya plays the game of faces, but cannot bring herself to say goodbye to Needle. Tommen and Margaery are wed, and the queen encourages her husband to send his mother away. Cersei challenges Margaery after learning of the idea. Tyrion and Varys visit the Long Bridge of Volantis and in a brothel, Tyrion is kidnapped by Jorah. The High Septon is humiliated publicly, and demands that the High Sparrow be punished. Cersei visits this new player on the scene and is surprised by his humble demeanor. Littlefinger reveals his plans of marriage to Sansa, encourages her to avenge her family, and the Boltons welcome them to Winterfell. Jon turns down Stannis’s offer, and receives some advice from Davos Seaworth. For refusing his new assignment, Janos Slynt is executed by Jon Snow.

Tyrion learns Jorah is bringing him to Daenerys. Cersei permits the High Sparrow to reestablish the Faith Militant, who then arrest Loras Tyrell and tear up Littlefinger’s brothel. With Margaery’s encouragement, Tommen approaches the Great Sept to demand Loras’s release but backs down. Jaime and Bronn fight a Dornish patrol, and the Sand Snakes hold the ship captain who brought the men to Dorne. Jon adjusts to his new role and is approached by Melisandre. Stannis shares with Shireen his memory of how she caught greyscale. Littlefinger relates to Sansa the story of the Harrrenhal tourney. Barristan reminisces about Dany’s brother Rhaegar. The Sons of the Harpy attack the Unsullied, and Barristan dies saving Grey Worm.

Daenerys mourns Barristan and feeds a master to her dragons. Grey Worm survives the Harpies attack and sharing a touching moment with Missandei. After talking it over with Missandei, Daenerys decides to marry Hizdahr and open the pits to unite Meereen. Maester Aemon counsels Jon in his position, and Jon decides to go north to Hardhome with Tormund to retrieve other wildlings. Stannis encourages Sam to keep researching how to defeat the White Walkers, and the king leaves Castle Black with his family and his army. Brienne attempts to get a message through to Sansa via a servant. Myranda leads Sansa to the kennels to meet “Reek.” Later, the Boltons have a tense family dinner, and afterward when they meet alone, Roose tells his son about his birth. Jorah and Tyrion travel through the ruins of Valyria and are attacked by Stone Men. Tyrion nearly drowns but is saved by Jorah…who we see has developed a patch of greyscale on his wrist.

Cersei and Littlefinger make a deal for the North. Loras goes on trial, and Margaery is caught lying for him. Arya practices her skills at lying, and eases a dying girl’s pain, which earns Arya entry into the Hall of Faces. Jorah and Tyrion continue their travels on foot and Jorah learns his father has died. The men run into slavers, and after a close call, Tyrion talks them into bringing him and Jorah to Meereen. Bronn and Jaime sneak into the Water Gardens, but their rescue of Myrcella is interrupted by the Sand Snakes and Areo Hotah. Myranda tries to intimidate Sansa with hints of Ramsay’s past but fails. Sansa and Ramsay marry in the godswood, and Ramsay rapes Sansa on their wedding night, forcing Reek to watch.

Sansa asks Reek for help, telling him about the plan to light a candle for aid. Reek agrees, but instead tells Ramsay about it and the servant woman is flayed. Jon leaves for Hardhome, and Sam and Gilly look after the dying Maester Aemon. The maester dies, and Sam gives his eulogy. That night, Gilly is attacked by two Night’s Watchmen, and is saved by Sam and Ghost. Afterward, Sam and Gilly have sex. Stannis’s march fares poorly in the snow but he refuses to retreat. Melisandre tells him a blood sacrifice is needed. In prison, Bronn sings and nearly dies from slow-acting poison as Tyene Sand toys with him. Olenna challenges the High Sparrow and meets with Littlefinger. Cersei gloats at Margaery’s cell, but then has her own fall when she is arrested afterward. Jorah and Tyrion are sold to  a master of pit fighters, and Jorah fights before Daenerys. When he shows himself, she is angry, but he offers a gift, and Tyrion reveals himself as the gift.

Daenerys decides to spare Tyrion and takes his advice to exile Jorah again. Later the two meet in private to decide his fate in her city. Imprisoned Cersei refuses to confess, and Qyburn updates her on the state of matters in a visit. Arya’s new identity as a clam-seller is a success and she receives her first killing assignment. Reek admits to Sansa that he didn’t kill Rickon and Bran, and Ramsay proposes a plan for defeating Stannis’s army without a siege. Sam reassures a concerned Olly about making right choices and that Jon will return. Jon has a difficult time convincing the people of Hardhome to go south; some are open to it, some refusing to accept the offer. The White Walkers and their wight army massacre the people of Hardhome, with the Night’s King showing terrifying powers as Jon and the survivors escape.

In Dorne, the Lannisters and the Martells come to an agreement, much to Ellaria’s displeasure. Arya approaches the Thin Man to complete her assassination but spies Meryn Trant, and follows him to a brothel. Jon and the wildlings return to the Wall, greeted coldly by the Night’s Watch. Ramsay’s covert raid on Stannis’s camp cripples the march, and Stannis asks Davos to carry a message to the Wall for aid. Davos bids farewell to Shireen, as she reads The Dance of the Dragons. Stannis visits with his daughter too, before having her brought outside where a stake is waiting for her. Shireen is burned, as her father watches and her mother breaks down. Daznak’s Pit opens, and Jorah enters the ring. He survives his fights and takes down a Son of the Harpy about to kill Daenerys. Chaos break out in the audience, as masked Sons materialize everywhere attacking. Hizdahr dies, and Tyrion saves Missandei. Daenerys’s allies are surrounded in the arena when Drogon arrives, slaughtering and setting fire to anything in his path. Daenerys mounts her dragon and escapes the pit.

Myrcella receives a poisonous farewell kiss from Ellaria Sand and dies in her father’s arms. Stannis is ready to march, but finds that half his army has deserted and Selyse has hanged herself after Shireen’s death. Melisandre abandons camp. Stannis leads his men to Winterfell, where they are destroyed by the Boltons. Stannis survives, only to be found by Brienne of Tarth, who sentences him to death. Myranda blocks Sansa’s escape and theatens her; Theon pushes Myranda over the railing to her death, and Sansa and Theon jump from the walls of Winterfell. Arya finally crosses Meryn Trant off her list, but pays for it when she’s blinded at the House of Black and White. Daenerys’s advisers are lost without her; Daario and Jorah leave to find her. Somewhere in the Dothraki Sea, Daenerys runs into a khalasar. Cersei completes a walk of atonement, nude through King’s Landing, in order to be freed from prison. Sam and Gilly depart for Oldtown, and Davos learns of the Baratheons’ ill fates. Jon is led into a trap and stabbed by the men of the Night’s Watch.

Thanks again to Greatjon of Slumber for his help throughout this process and to everyone for their dedicated voting and discussion!

The poll will be open for 48 hours: Best Episode beginning now and running until 10/6/15 at 10AM EDT. The results will be revealed at the Watchers On The Wall Awards ceremony soon!

We’re working out the final details of the ceremony at the moment, and will reveal the date of it shortly.  The award party will most certainly be a fun event for all!