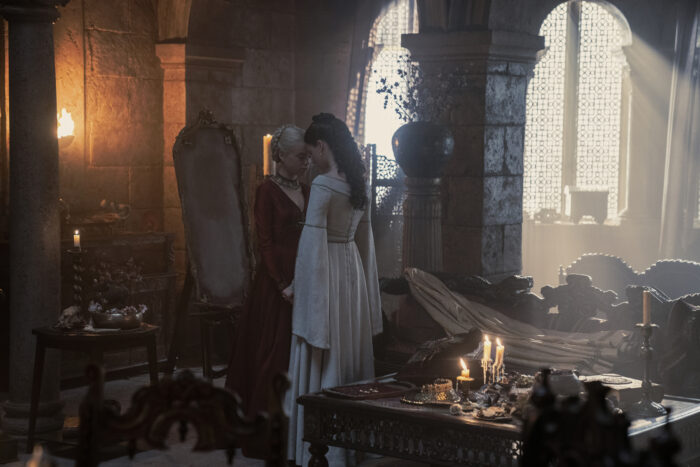 Warner Media released several new stills from House of the Dragon (photographed by Ollie Upton), offering us tantalizing hints at relationships between characters and story continuity.

Several photos are of Rhaenyra wearing the same gold dress as she serves wines to the Small Council and meets Daemon alone (except, of course, for her protector, Ser Harrold Westerling) in the throne room, implying that these scenes take place on the same day (TV characters never wear the same dress twice. It is known).

In the first small council still, from left to right, we can see Lord Corlys Velaryon (Steve Toussaint), perhaps as Master of Ships (although Lord Tyland Lannister, played by Jefferson Hall, is supposed to have that role at this point); Ser Otto Hightower (Rhys Ifans), Hand of the King; Princess Rhaenyra Targaryen (Milly Alcock), cupbearer to the king; King Viserys I Targaryen (Paddy Considine); and Ser Ryam Redwyne (Garry Cooper), Lord Commander of the Kingsguard. Though the rest have their backs to us, we can just make out they are, again from left to right: Lord Lyman Beesbury (Bill Paterson), Master of Coin; Mellos (David Horovitch), the old Grand Maester; and Lord Lyonel Strong (Gavin Spokes), Master of Laws. 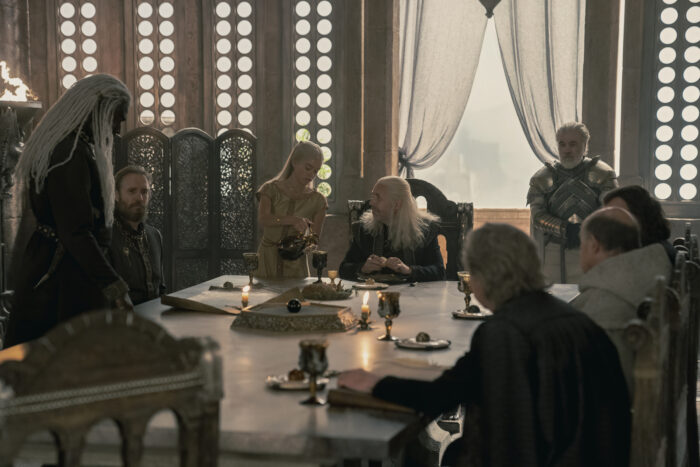 Also, the look on Viserys’ face melts my heart! 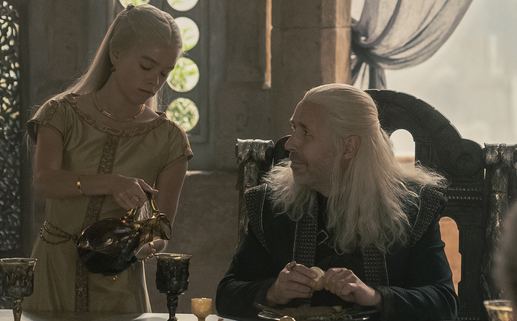 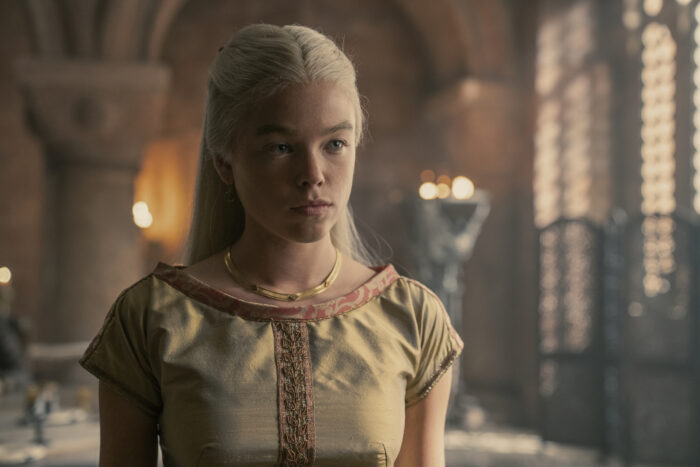 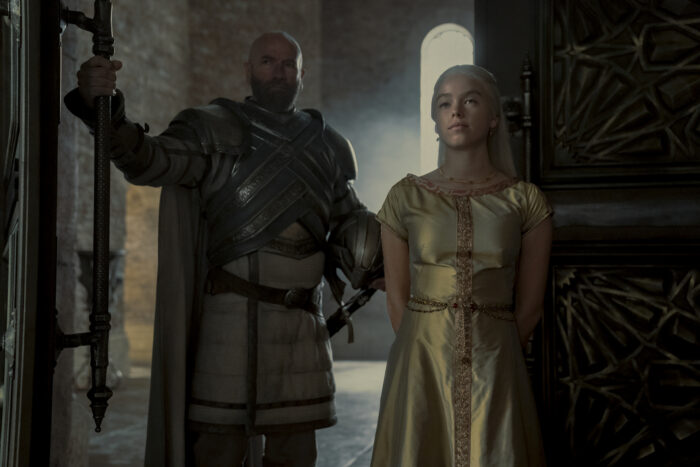 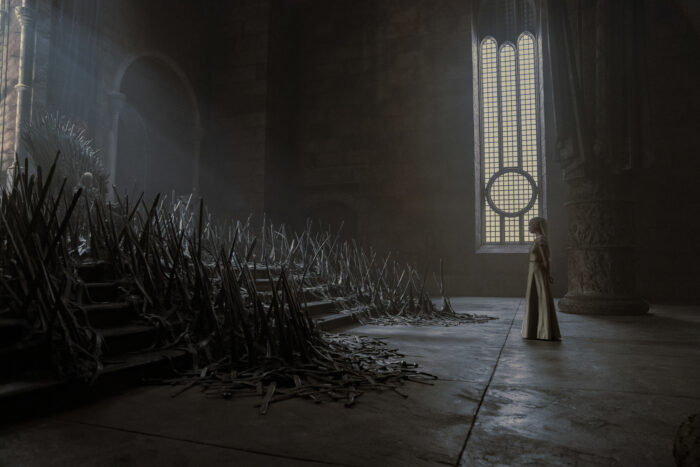 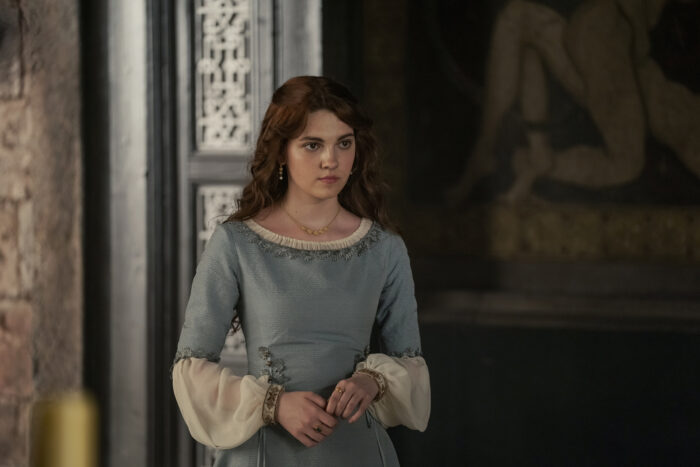 Otto Hightower attends [redacted]’s funeral. To his right, in the background, we get a clearer view of Lord Lyman Beesbury and Grand Maester Mellos. 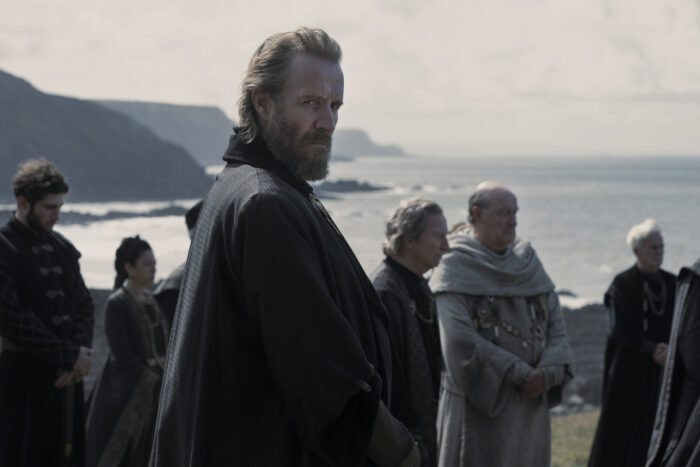 We get a wide shot of the scene in which Viserys tells Rhaenyra “the throne is the most dangerous seat in the realm.” I also like this idea that the Targaryens display their dragon skulls in the exact same manor they display their statues of the Seven. 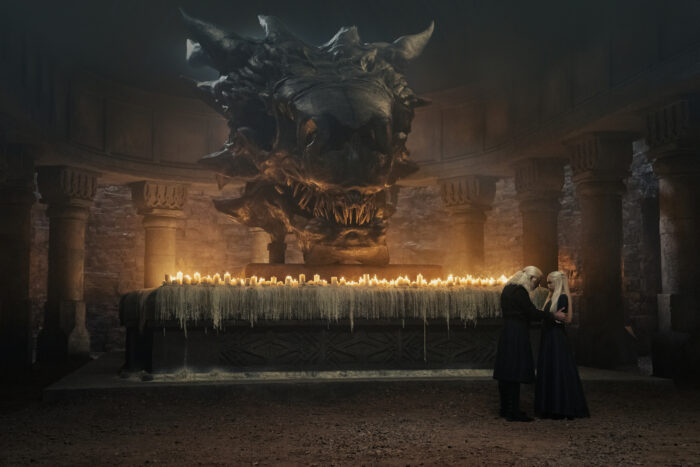 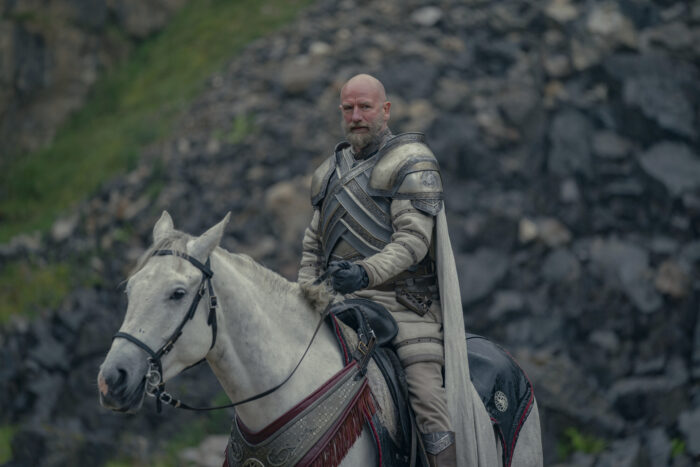 Rhaenyra (Emma D’Arcy) and Daemon (Matt Smith) walk along the beach. From our glimpse of this scene in trailers, I’d assumed this was shot as day-for-night (scenes that are filmed during the day and later color corrected to take place at nighttime). But now that we can see the pale blue sky and clouds above them, I’m wondering if this just takes place in very, very early morning? 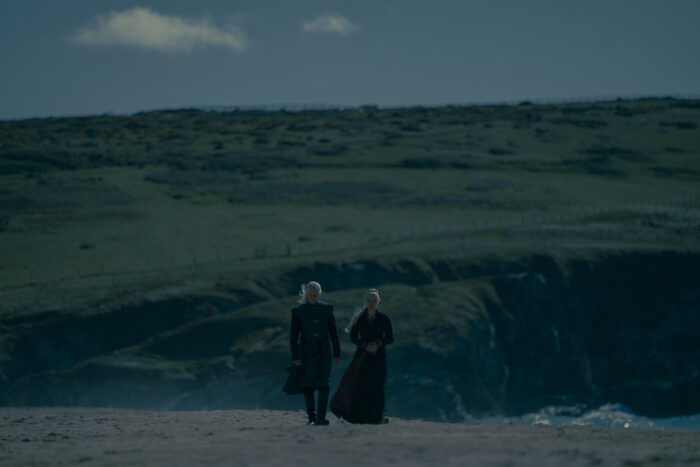 Ser Criston Cole (Fabien Frankel). Love him or hate him, there he is. 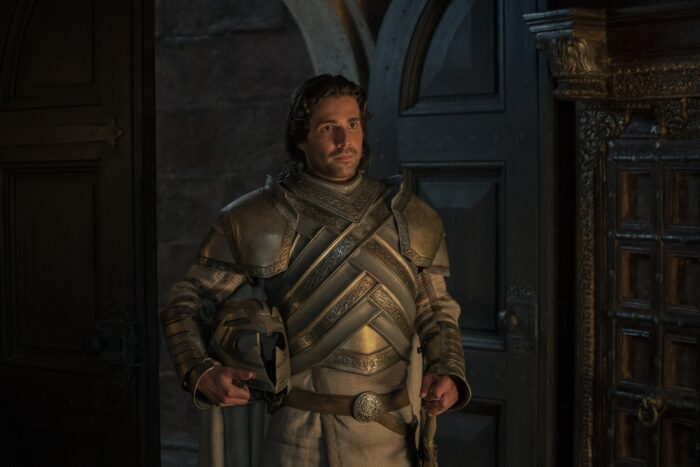 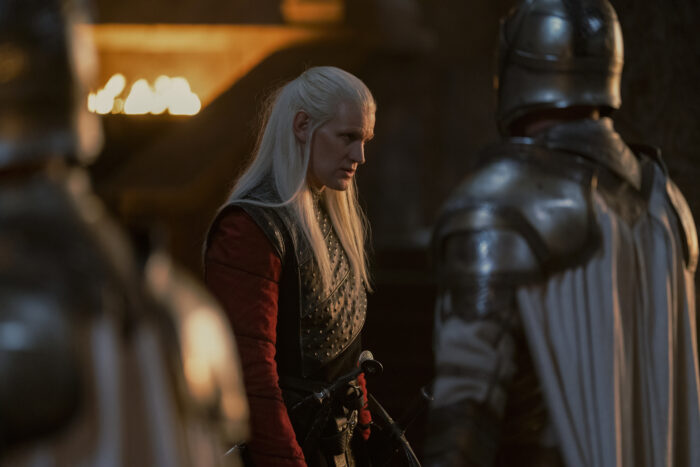 Otto Hightower and Alicent (Emily Carey) talk. At first, I thought this was from the scene in which Otto tells his daughter, “We play an ugly game. You have the determination to win it.” However, Alicent’s dresses don’t match. 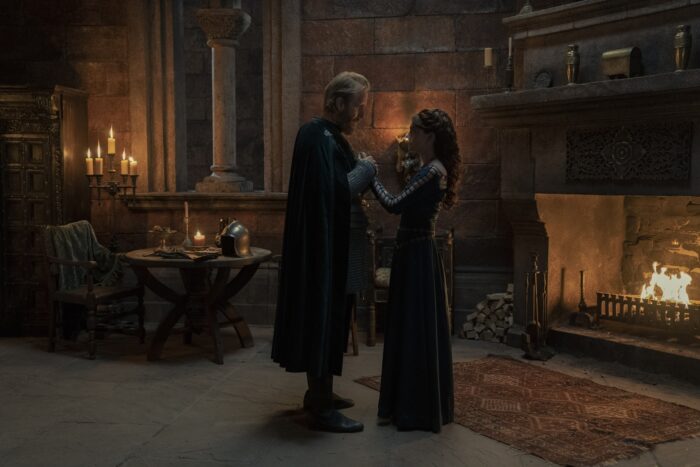 Alicent in a green dress. Rhaenyra in a black dress. 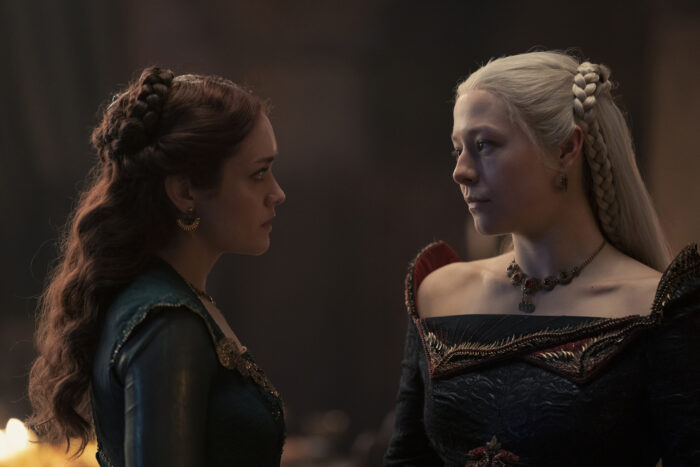 Alicent attends a Small Council meeting (note the weird marble on the plate if you’re unsure of the setting), set years after the earlier one. That’s Ser Harrold Westerling as Lord Command of the Kingsguard in the background, and the new Grand Maester, Orwyle, to the right, played by Kurt Egyiawan. 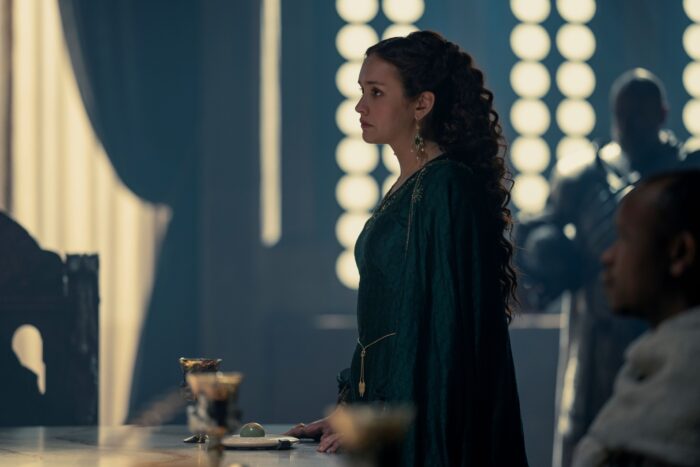 Rhaenys (Eve Best) and Corlys Velaryon attend the ceremony in which Viserys names Rhaenyra his heir and the Lords of Westeros pledge fealty. 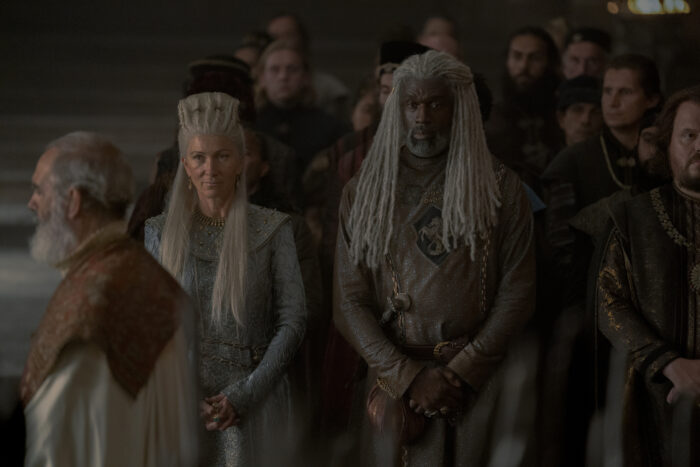 Another pic of Rhaenys and Corlys during a tourney. Rhaenys’ dress is almost identical to the one she’s wearing in the above still, but the necklines aren’t quite the same. We can see Ser Harrold to the left, alongside the Velaryon kids. To the right, a sullen King Viserys. 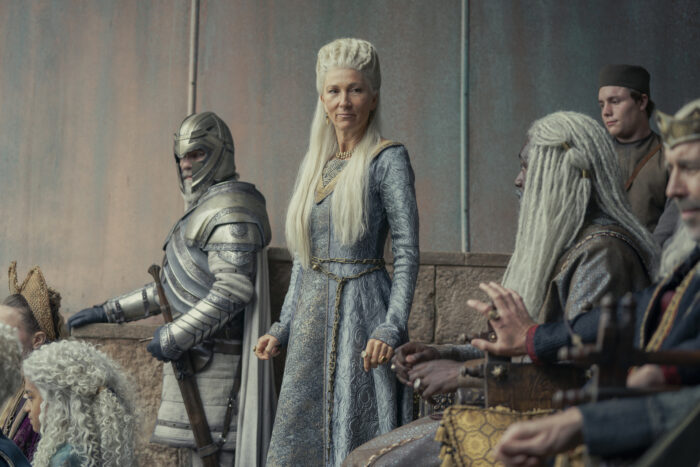 A picture says a thousands words. I have nothing to add.

Finally, released separately through HBO Max’s social media, we have this still of Emily Carey and Milly Alcock talking to director and co-showrunner Miguel Sapochnik between takes: 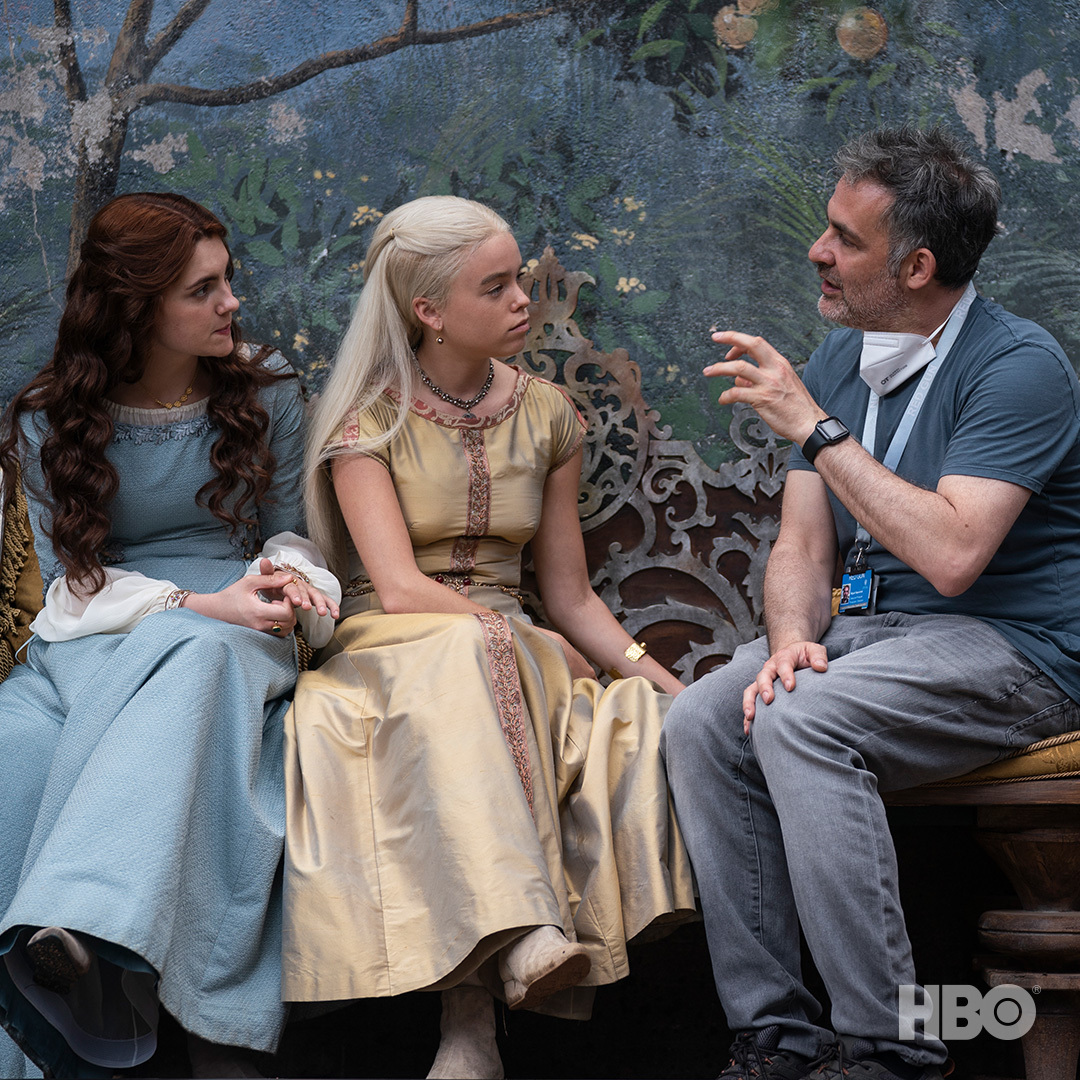