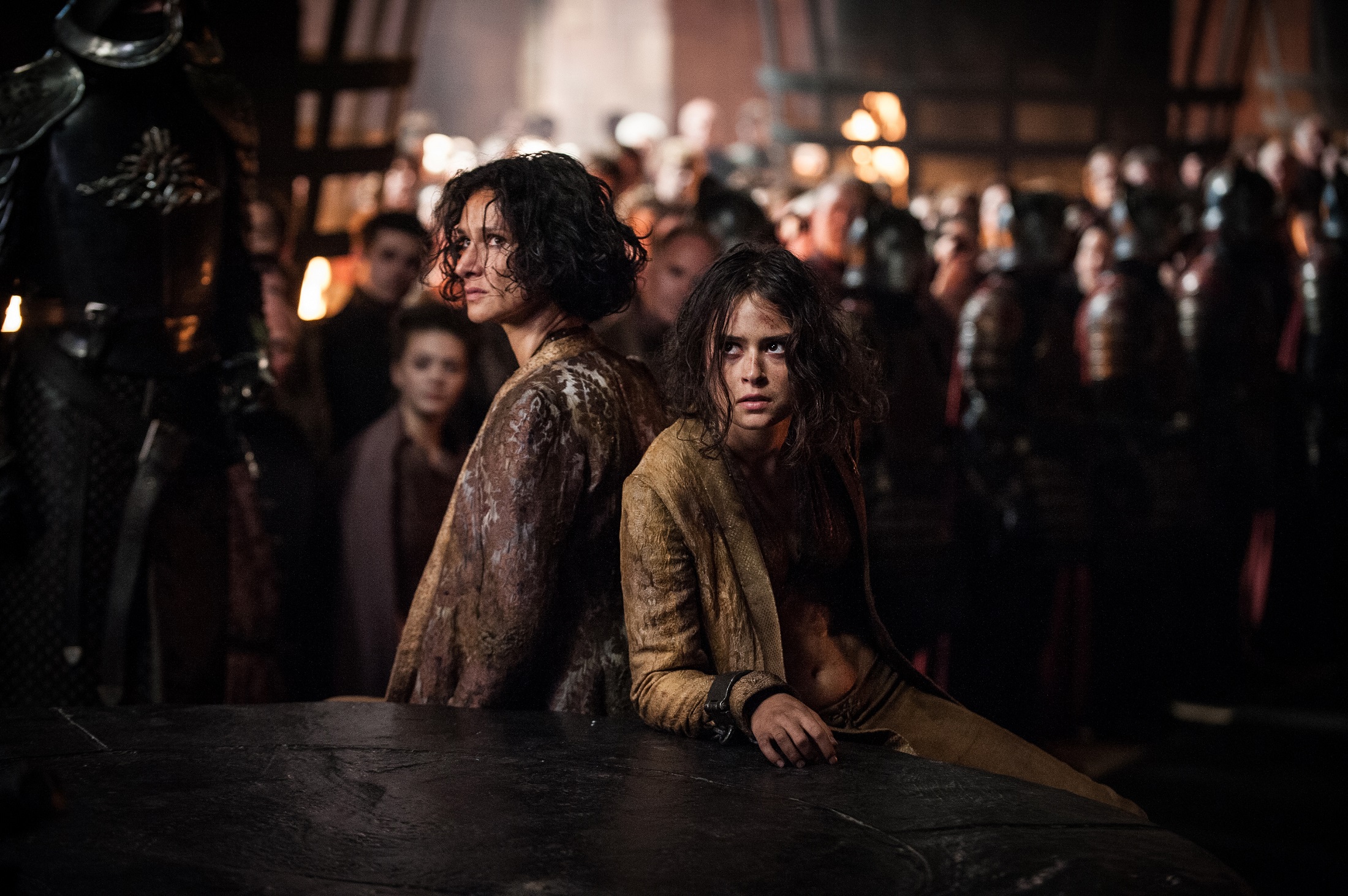 Greetings and glad tidings to you all and welcome back to another Game of Thrones recap of epic Unsullied proportions. Hopefully, things are going better for you than they are for Team Targ.

How the hell do you write a recap, as opposed to a novel, on that episode?  Revelations, infatuations, annihilation.  Shit… drop your weapons at the door and let’s give it a shot. 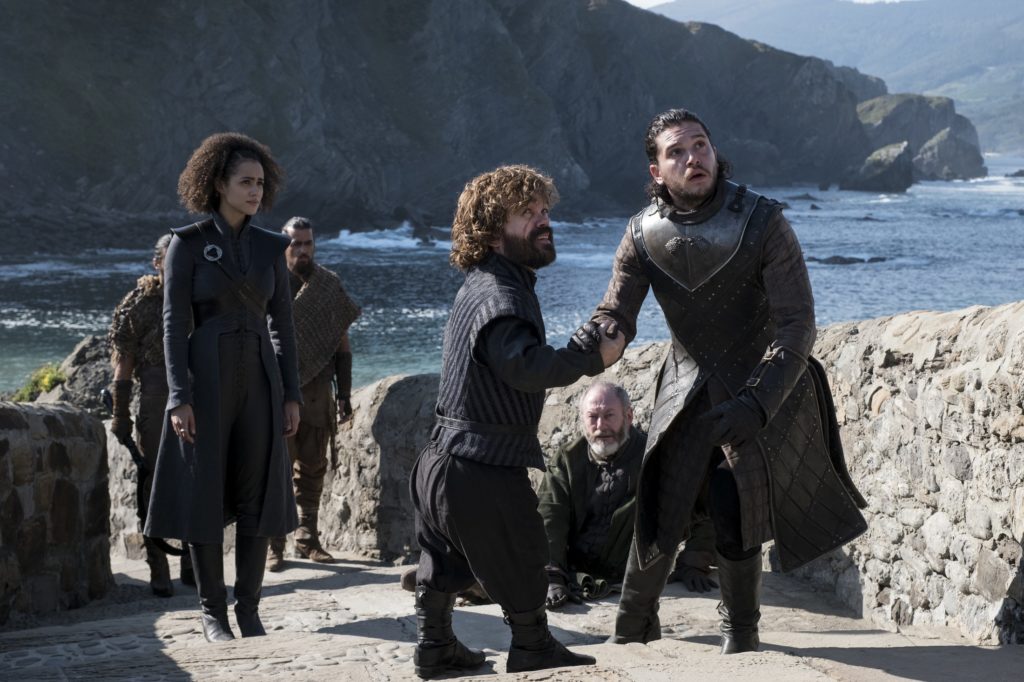 The Meeting of the Minds

We waste no time and get right to the situation at hand… the meeting of Jon and Dany.  The waves crash as Jon and company are met by Tyrion and Missandei, along with some chummy Dothraki soldiers and a request to hand over the weapons (don’t give them fucking Longclaw, dammit. Shit.). Jon gives the “I want that back, MF” look to the man, and then we are off to the races.

Davos makes small talk with Missandei, well, because he is the freakin’ man and could still sell ice to Wildlings. He almost sells it to Dany in a few.

Then… proof of the dragons. 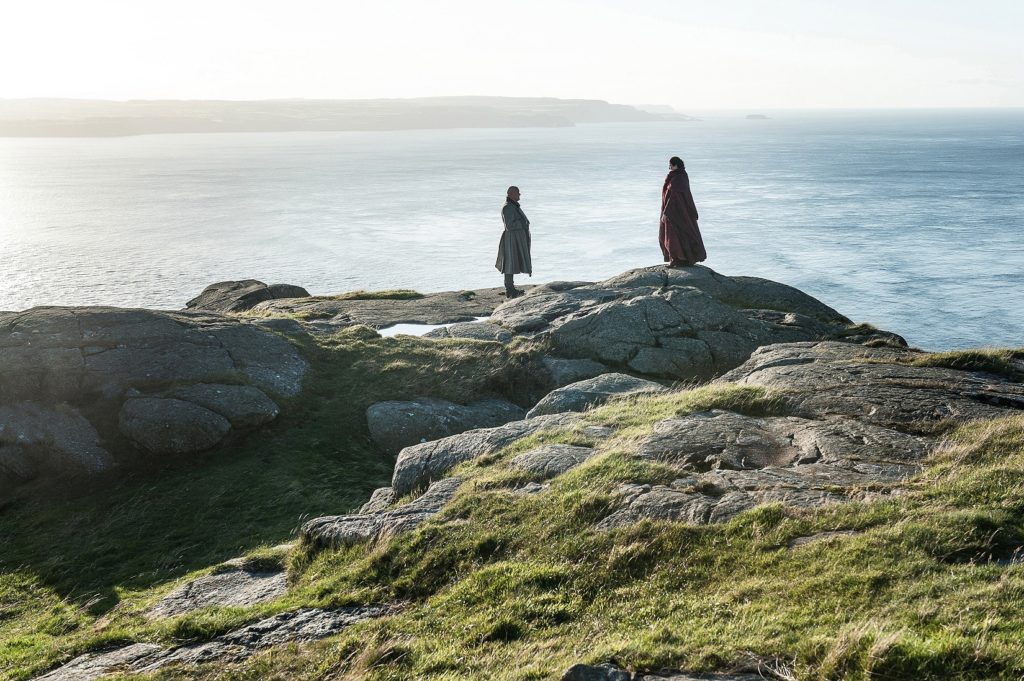 Mel and the Merman

Overlooking the entrance is Varys and Velvet as the Spider inquires as to why she wouldn’t want to greet the King in the North. Mel admits that they did not part on good terms and tells the Spider that she made many mistakes. And then, the curveball (or was it a slider?)… Varys tells Mel that she should not return to which she replies that she has to die in Westeros, just like him. Here is my question… was this just a jab at Varys or is there more to the story about the mystery of who (or what) the Spider really is? A man has many questions. 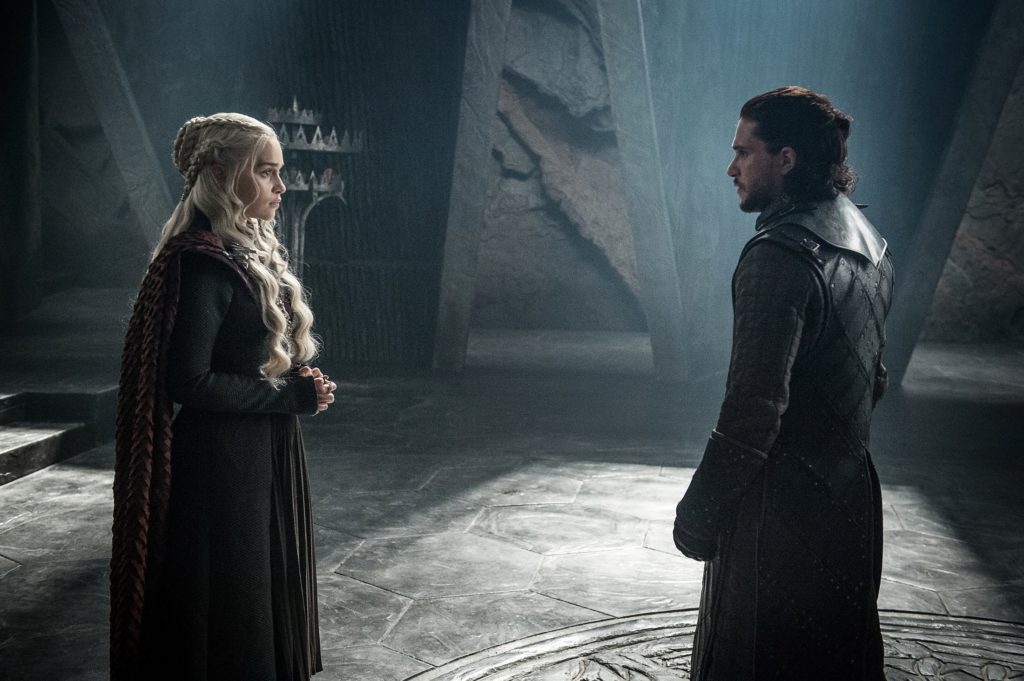 You Stand in the Presence of 1000 Titles

I’m not going to recap every single word of what we all watched in unison. But I will say that I am invariably content with the way this meeting was handled.

My fear was that we would be subject to an encounter that has been six seasons in the making and we would witness five minutes of it, somehow inexplicably led to believe that everyone in the room would work together in joyful adoration. That didn’t happen. Dany wanted a bent knee. Jon said, “no thank you.” And what could have been a “we gotta get this story moving” quick moment ended up encapsulating the first 20 minutes of the episode. For that, I am thankful. It deserved the time investment.

After exchanging unpleasantries, Dany issues an apology on behalf of House Targ for the past crimes her House had committed against House Stark. Jon explains that he needs her help and that he needs hers.

A ship full of Greyjoy men rescue Theon, a scene included in the episode assumingly to show that Theon isn’t still floating while waiting to be caught in the wake of Gendry’s rowing. PTSD continues to garner no sympathy, especially during wartime. 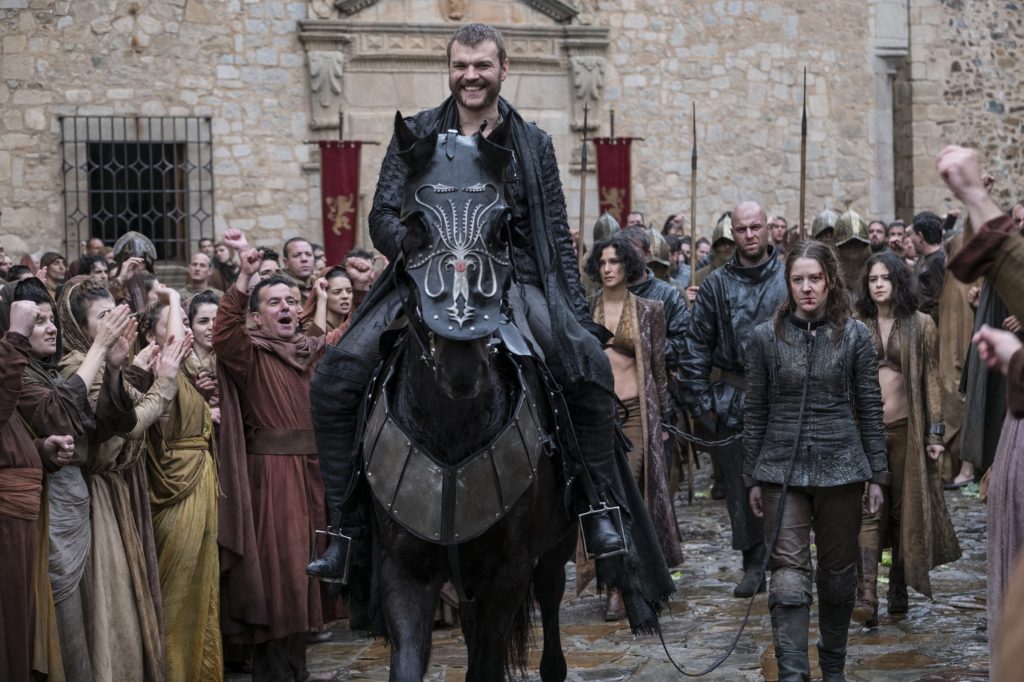 Euron arrives in KL with his “gifts” Ellaria and Tyene and presents them to Cersei (notice the Ellaria glare at the Mountain).  I guess he is keeping Yara for himself? Euron then asks Jaime for advice concerning “fingers in the bum.” The dude is fuckin’ nuts. 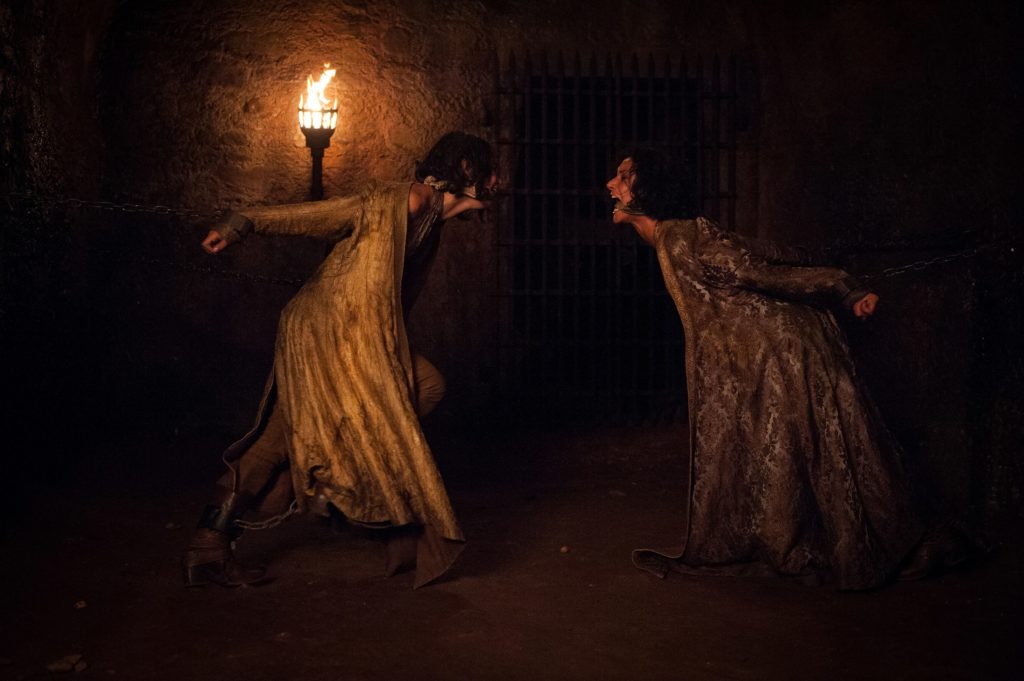 For Some Reason, I Continue to Underestimate Cersei…

But not anymore. Especially after the strategy revealed at the end. Cersei takes Ellaria and Tyene to a cell and gives Tyene a kiss of death involving poison just like Myrcella. In epic Cersei style, she informs Ellaria that she will be forced to watch all of it. Cersei is ruthless yet justified, considering what they did to innocent Myrcella. This is one of the many ways the show has been fantastic… in making us watch the tragedies involved while justifying the means in which it is carried out.

The Sand Snake moments historically have had their issues, but this end to Tyene and presumably Ellaria was pretty damn strong and incredibly well-acted by everyone in the room.

Later, in the Land of Fortuitous Incest…

Cersei goes to make sure her ally, Jaime, remains loyal.  Ozzette got to see Jaime’s butt cheeks again, and then, there was the annoying knock on the door. 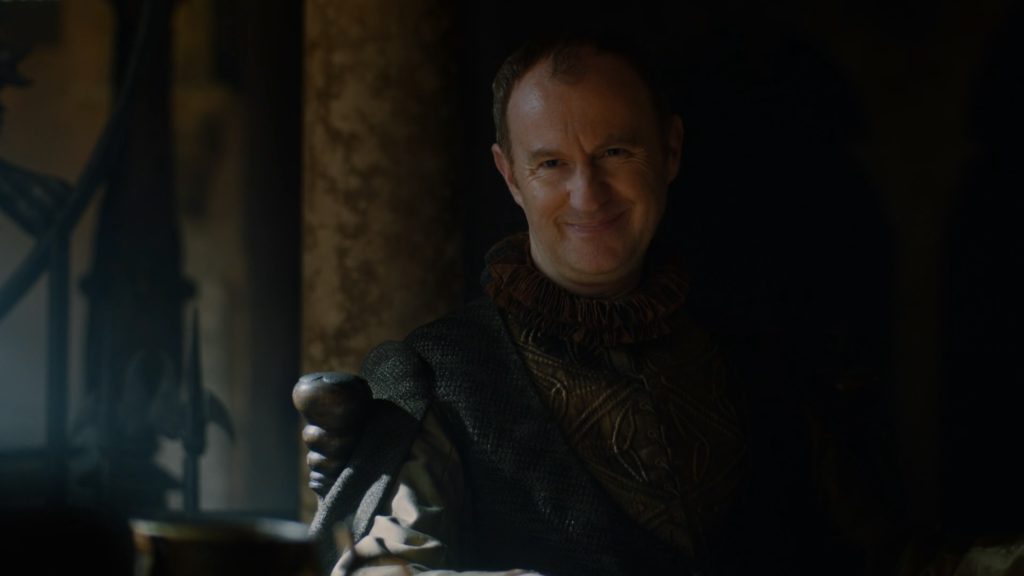 Finally, the Iron Bank and Tycho have come to collect on the outstanding credit card balance of the realm. Cersei gives her account regarding the current situation in the war and that Dany has actually hurt the Bank considering what she has done to the slave trade. Cersei urges Tycho to stay in KL and that the debt will be paid in full.

Jon and Tyrion discuss their respective issues and Tyrion suggests that Jon ask for something reasonable. So, he does. Tyrion approaches Dany about giving Jon access to the dragonglass, unsure about the nomenclature. She asks about the knife in the heart statement, and of course, it is dismissed. 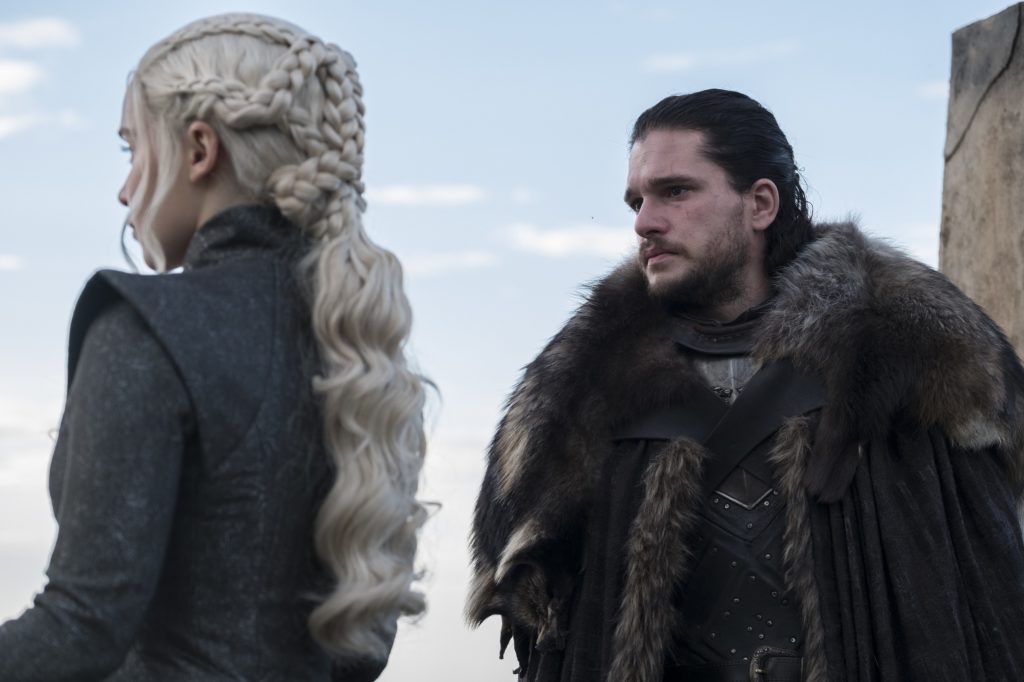 Jon and Dany finally have a chance to meet without the Dothraki Daycare and discuss their similarities. Dany gives Jon clearance to mine the dragonglass which was a good decision… as it ends up, she’s going to need some help.

Finally, we head North where Sansa is doing a damn good job of running the fort while Baelish fiendishly observes. Just as Sansa seems to be doing just fine on her own, Petyr Baelishes out the “battle in the mind” phrase once again grabbing her attention. And I repeat, the SOB isn’t dying anytime soon. 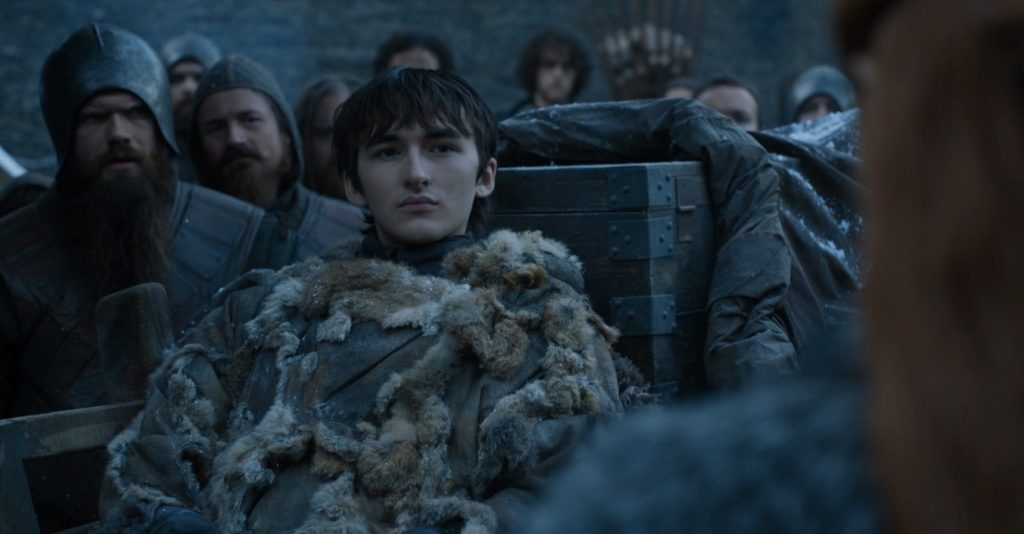 Finally, Bran and Sansa reunite and meet under the Weirwood. Sansa tells Bran that he is the Lord of Winterfell. But Bran informs Sansa that he can never be a Lord because he is the Three-Eyed Raven. He then recalls what happened to Sansa which was too much for her to relive. 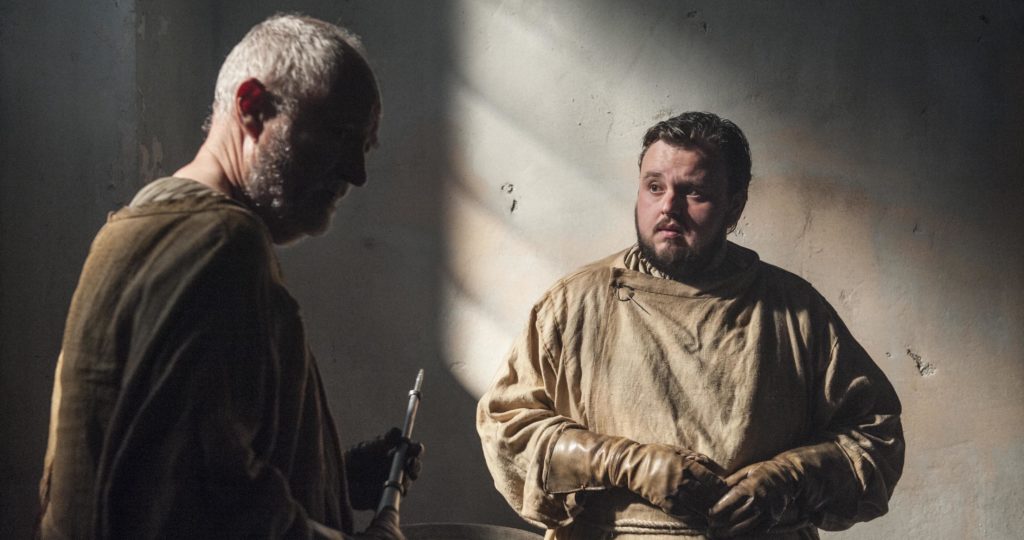 Ebrose gives Jorah the “once-over” and pronounces him healed from greyscale and allows him to leave. Jorah and Sam share a moment of thanks as Jorah heads for Dragonstone. Ebrose scolds Sam while giving him praise and then quickly gives him a rather large writing assignment as punishment. Better than having to write “I am Sam. Sam I am” a million times, I suppose. 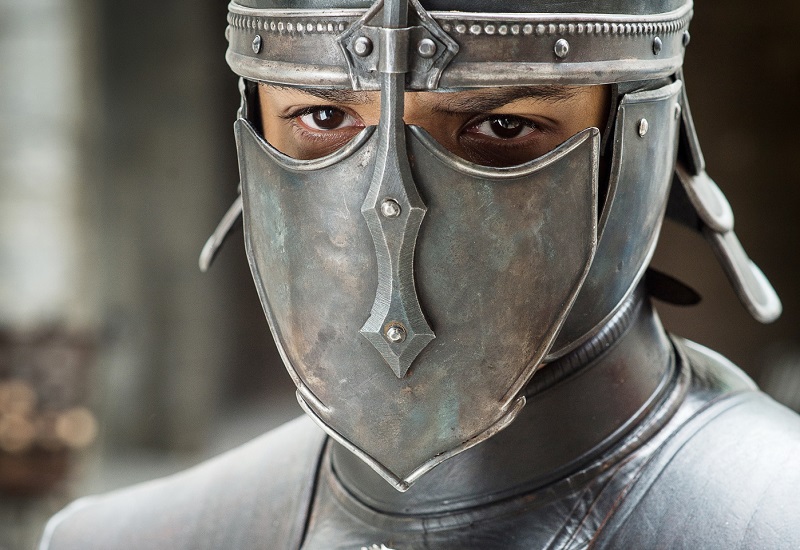 Again, I will not underestimate Cersei anymore. While Dany and company discuss the attack on Casterly Rock and Tyrion speaks to his knowledge of the sewer system, the Unsullied arrive and take the Rock as planned. What they didn’t know was that the bulk of the Lannister army weren’t even there and were busy taking care of business at the more enticing location of Highgarden, all while Euron showed up at the Rock to take out the Targaryen fleet. 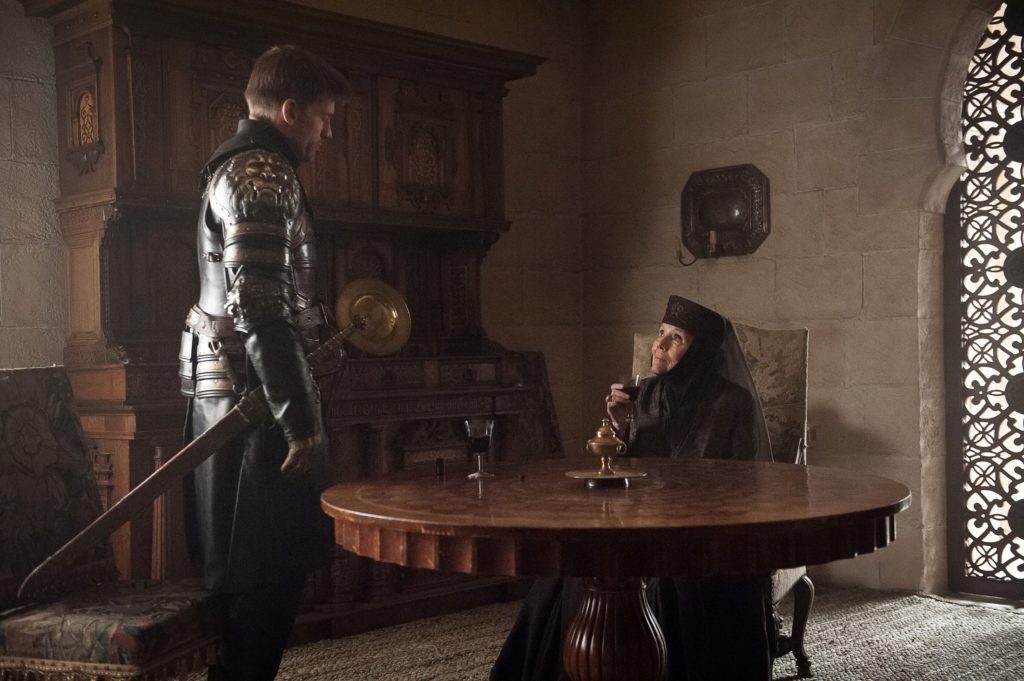 Jaime makes his way upstairs for what would presumably be our final scene with the Queen of Thorns at Highgarden. While the scene would lack a painful death, the painful realization that this would be the end of Lady Olenna was a lot to digest.

There were quite a few revelations in this scene: the fact that the Unsullied would be able to hold the Rock for a bit, but would run out of food and be forced to march all the way across Westeros to get back due to the fleet being burned; the lessons Jaime learned in past failures referring to Robb Stark defeating the Lannisters at Whispering Wood; and most notably, Jaime’s realization that Olenna had been the cause of Joffrey’s demise. Granny Lemon Cakes went out, but at least she went out in style with words of wisdom about the monstrous Cersei, coupled with a departing kick in the nuts to the Lannisters. I wouldn’t have expected anything less.

Favorite Action Sequence:  The taking of Casterly Rock looked visually bad at the beginning, but better when the Unsullied stormed through the gates. But it was overshadowed by the fact that it really didn’t matter.

“Picked up some scars along the road.” –Jon

“This place has changed.” –Davos

“This is Jon Snow. He’s King in the North.” – Davos immediately following the 1000 titles

“I give you what no other man could give… justice.” Euron (while staring at Jaime)

“You shall have what your heart desires… when the war is won.” –Cersei to Euron 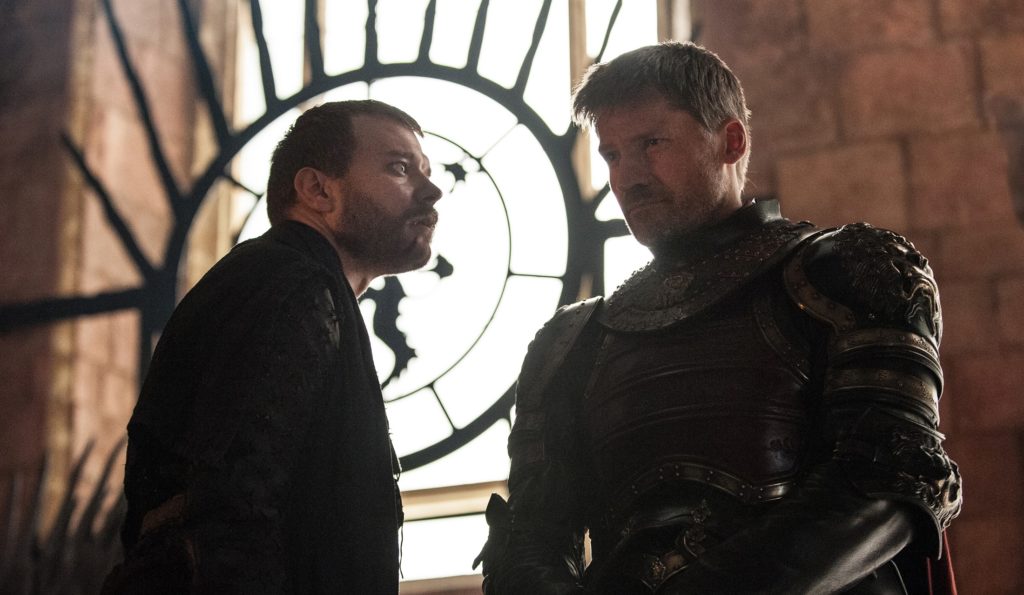 “Does she like it gentle, or rough? A finger in the bum?” –Euron to Jaime (the burn continues)

“We invest in endeavors we deem likely to be successful.” –Tycho Nestoris

“No better place for low pursuits than beneath the ground.” –Tyrion

“And now the reins weep o’er our halls.” –Olenna

“That was my prize mistake, a failure of imagination.” -Olenna

Favorite Sequence: Too damn many to choose from. Jon and Tyrion, Dany and Jon, anytime Davos speaks, the end of the Snakes, and the Iron Bank!

The “Ow, That Shit Hurts Award” goes to: The Lannister who got the spear to the chest, and Jaime learning that the QoT took out Joffers.

Overall Thoughts: By far, my favorite episode of the season to this point although the other two were respectively very good. I was surprised to see Bran so disconnected from the emotions of the reunion. But he has seen a lot and is obviously still sorting things out considering his new responsibility. Regardless, it was weird.

Through all that has transpired, Dany is learning that obtaining the throne may be a more difficult objective than what she may have previously thought. How long until she loses faith with Tyrion and jumps on a dragon? Jorah will most certainly be a welcome sight, and it is becoming abundantly clear that she will most definitely require Jon’s help in the future.

What say you, good peeps? Voice away below.