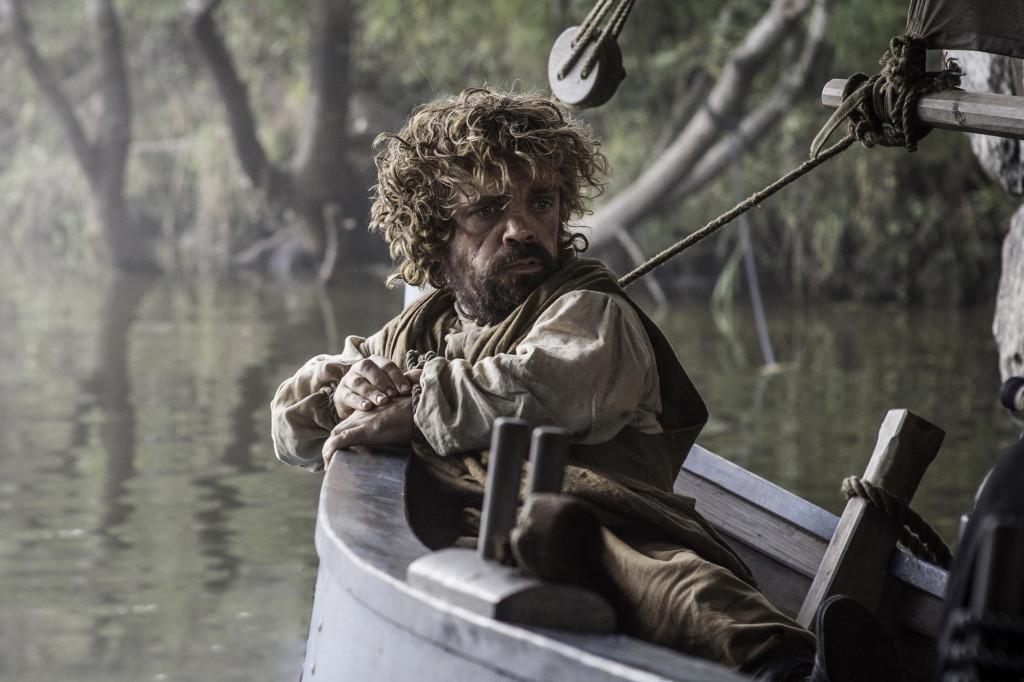 Good day to all you good Ladies, Sers and Stone Men.

This one goes by @OzofThrones of House Oz and you have found the spoiler-free and speculation-stocked Unsullied Recap of epic proportions.

Join us as we discuss dragon BBQ’s, Snow on the go, the contagiousness of greyscale, and an episode chock-full of Bolton Family Values…

Once again,thank you for joining us at our great monstrosity of ice and stone at the Wall.

First off, a note regarding last week…

After reviewing Sons of the Harpy, I admittedly was entirely too harsh in regards to the episode. Just because a couple of bad apples can leave a less than fruitful taste in your mouth, as vested viewers we should be wise enough to not allow those apples to spoil the entire bunch.

If anything, the criticism should have been that there was a complete dump of information overload. But that too is an unfair criticism, especially since intense non-book readers typically long for increased knowledge regarding the history surrounding this great tale.

Depending on the progress of the season, Sons of the Harpy may be one of the most important of S5. But Kill the Boy was arguably the most entertaining. Let’s hit it…

Grey Worm in ICU: We open up with the Worm in recovery and potentially the best looking nurse in Meereen at his side. That’s the good news.

The bad is obviously the passing of Ser Barristan, a fact that was apparently spoiled by the previews of Ep. 5 at the end of Ep. 4. The jury is still out on whether or not the intention was to leave the viewers wondering if he had survived his wounds. Given that Worm slayed the Son just before Barristan was given a final blow in Ep. 4 and the question to Missandei on if Selmy had survived in Ep. 5 would lead one to believe it was.

Regardless, HBO took away most doubt in the Unsullied minds at least for the people that saw preview. I’m not sure if we will ever know the true intent, but alas, Selmy is no more. 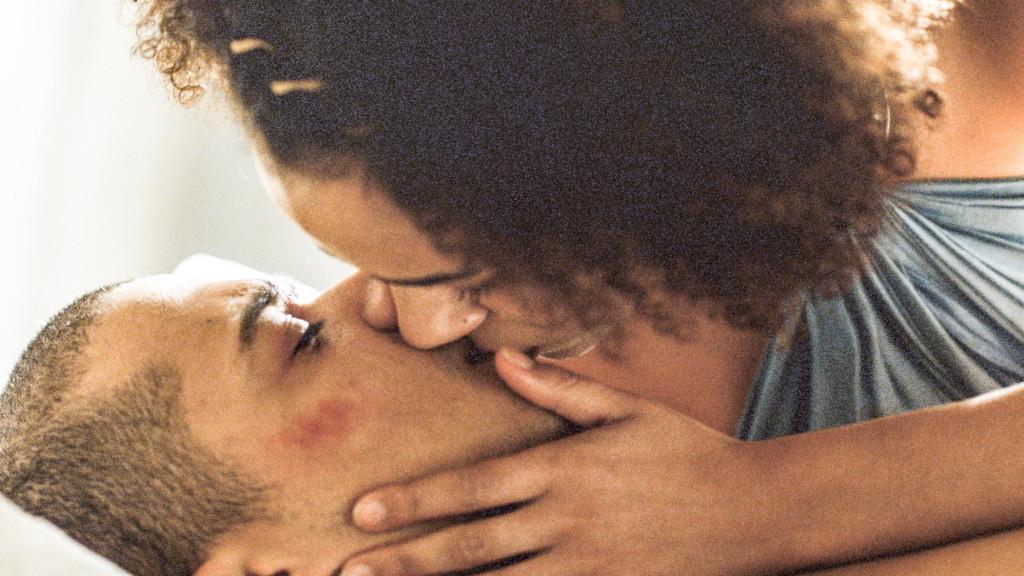 Worm obviously feels guilty which leads to his admission of fear of never seeing his beautiful nurse again. His statement to her leads to some Worm intimacy. A man is not entirely sure where this is leading, but the scene was very well done and seemed like a natural progression given the circumstances.

Dany’s Dragon Dinner: Having seen enough of the issues at hand, Dany tries a new tactic in offering up some appetizers to the big boys in the basement.

My only regret with this scene was that Hizdahr was not the chosen dish. Every time the guy talks, I silently wish for Daario to whip out the hooked sword and give Hizdahr a much-needed trim off the top. 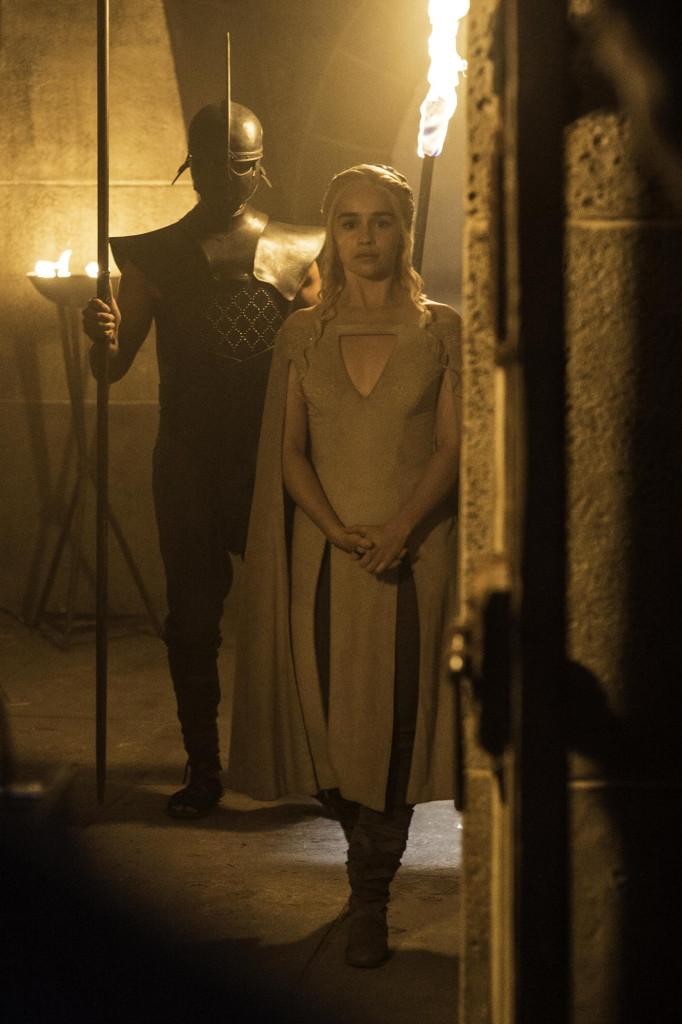 Instead, she caves to his wishes in allowing the pits to reopen and then proclaims that they will marry. What?

Damn, at the weddings.

Jon Kills the Boy: Tormund! In a move that makes sense in theory, Jon urges “Baby Seal” Giantsbane to have a nice conversation with the Wildlings about moving south of the Wall and avoiding becoming a part of the frozen dead army. 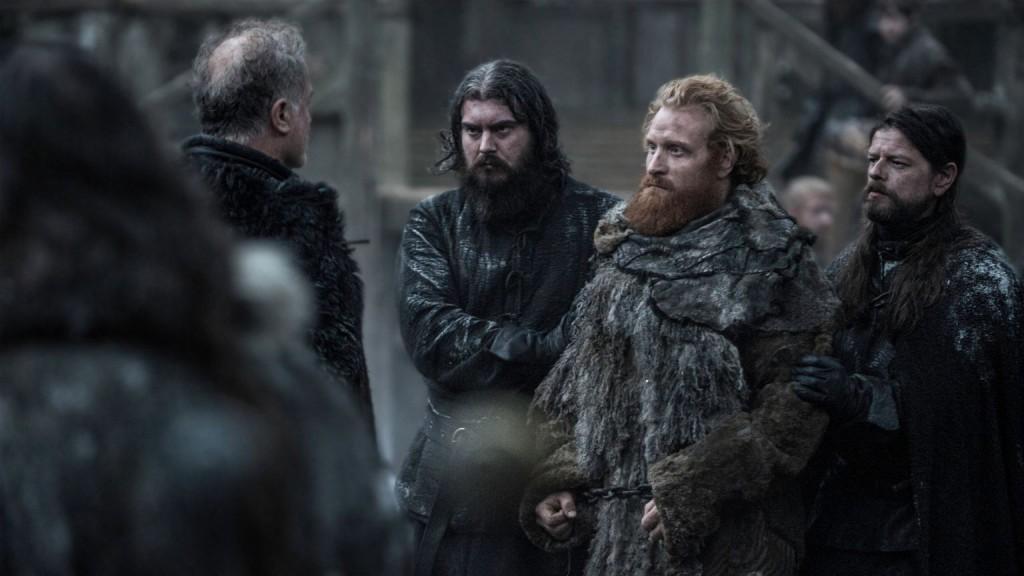 Of course, there is nothing popular about this move with the majority of the Crows including Edd and Olly. Giantsbane agrees so long as Jon agrees to be his companion. One of the many things that seems troubling with this arrangement is the state of the Wall with Jon being absent and only having recently been elected as Lord Commander.

Before Stannis leaves for Winterfell, he agrees to let Jon borrow the boats. As it appears, Jon going on the wildling cruise seems imminent. This raises plenty of issues… who will be left in charge? Will there be an uprising within the Crows due to his unpopular decisions? Could there be some kind of “vote of no confidence” against Jon? And ultimately, will they turn their backs on him?

Another notable encounter was that of Stannis and Sam the Student. Stannis talks to Sam about dragonglass and his father, Randyll Tarly. The name “Randyll Tarly” has been a recurring mentionable since Season 1 and holds importance as the one man that defeated Robert. As much has he has been mentioned throughout the duration of the show, hopefully we will actually see this man on screen at some point.

The fact that Stannis recognizes the usefulness of Sam was a nice touch. Sam certainly would have been a fantastic Maester.

And then there was that glare from Velvet…

The World Famous Bolton Bed and Breakfast: An all-inclusive winter resort for getting flayed, laid, and engaged. 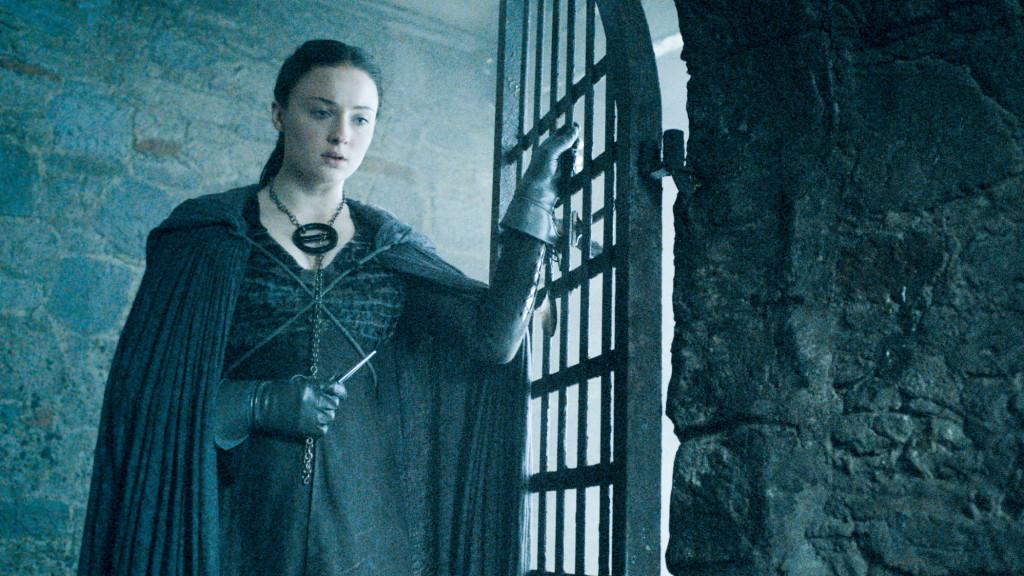 Myranda is none too pleased with the upcoming nuptials of Ramsay and Sansa, which comes as no surprise.

What does come as somewhat of a surprise is Myranda leading Sansa to the kennel and the inhumane quarters of Reek. Myranda knows the sadistic nature of the people in her surroundings, but she is apparently willing to chance the backlash of making such a move to scare the shit out of Sansa. Punishment likely awaits her.

Breaking Bread with the Boltons: In covering his ass (which Iwan failed to do in the opening Winterfell scene), Ramsay explains the current state of Reek as punishment for what he did (but didn’t actually do) to Sansa’s brothers. And Sansa appears to have bought it. 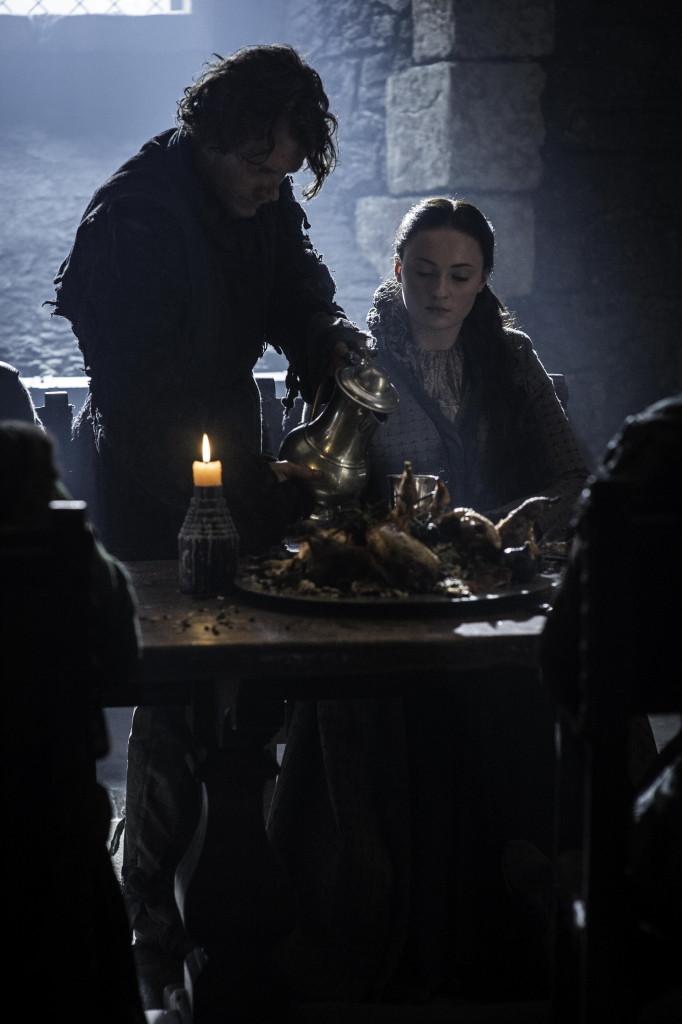 Walda would then break the news that the Roose indeed got loose and a Baby Flay was on the way.

Later, Ramsay would hear the horrific Boltonesque story of his conception and that the romantic Roose always considered him his son, quelling the fears of Ramsay that he would no longer be of importance to his father. Roose then explains the threat of Stannis and the importance of Ramsay in the upcoming battle.

All the while, Alfie Allen demonstrates again how incredible his portrayal of Theon/Reek really is. Reek is able to identify the fact that Sansa needs to leave which also may be an indication that eventually Theon could warn Sansa of the inherent dangers that she is faced with. That is, if it’s not too late.

There is also the “North Remembers” lady who tells Sansa to put the torch in the window if she needs help. Brienne and Pod are on call, although it’s hard to imagine how much help the two could be against a fortified Winterfell full of Bolton soldiers and well stocked kennel.

Valyrian Cruise Lines (no wine served): Jorah and Tyrion remain in the boat and venture through Valyria as a “safer” passage, as opposed to the open seas and the threat of pirates.

There are many reasons why so many are passionate about this show, and scenes like the depiction of Valyria has to be one of them. For lack of a better word, it looked fantastic.

Drogon flies overhead adding to the magnificent landscape. Unfortunately, he was also a distraction to something that just jumped in the water.

Finally, we get some indication as to the reasons for the numerous mentions of greyscale with the intro of the stone men. 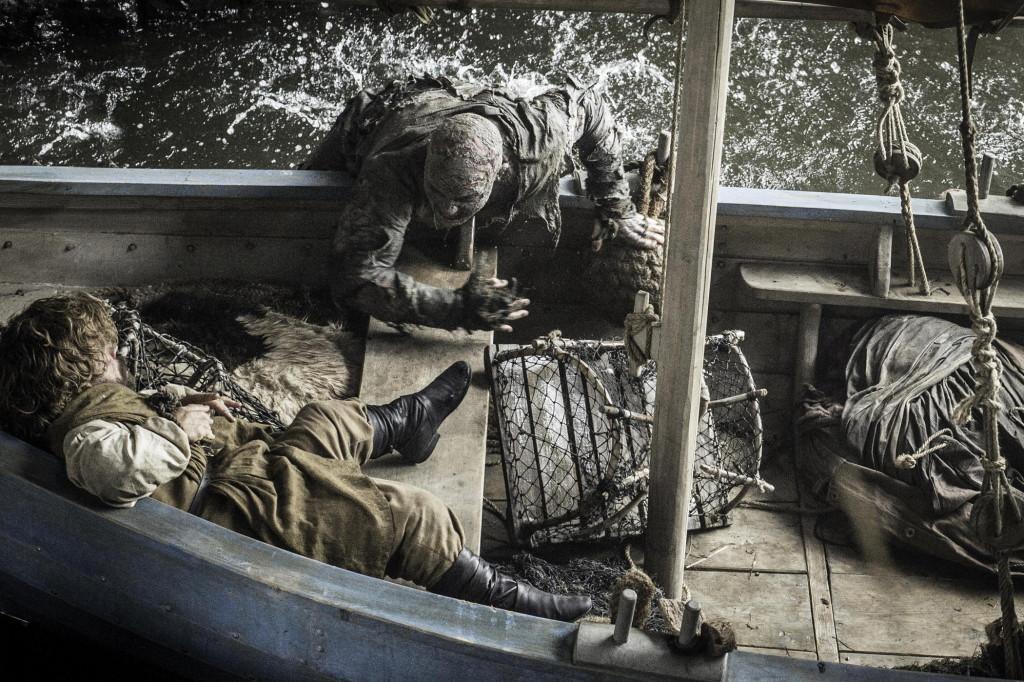 Tyrion gets taken under and Jorah gets touched. For Jorah lovers, the question now becomes how fast does greyscale spread and can he find a cure before it is too late? Jorah as a stone man would likely not be an upgrade in the category of handsome.

Favorite Quotes: “A good mother never gives up on her children.” -Dany

“Fewer.” –Stannis, in potentially the best one line quote since “Hodor.”

“This isn’t a strange place. This is my home. It’s the people that are strange” -Sansa, in the understatement of the Season

“I imagine you’re familiar with the procedure.” –Roose

“Don’t let them touch you.” -Jorah

Ow, That Shit Hurts Award: Being torn in half by two dragons. Granted, he was already dead, but still.

Jackass Award: As entertaining as dinner with the Bolton’s was, this has to go to James Bond Bolton for the horrible actions surrounding the conception of Ramsay. Good Lord.

Overall Thoughts: Man, what a fantastic episode. The pacing was obviously different, spending more time on particular scenes and giving each scene time to develop… a welcome change.

I’m also still trying to figure out the glare from Red Velvet on Jon. Was she trying to tell him that he was making a mistake, much like Stannis made by not taking her to Blackwater? Or am I reading too much into it? Probably.

What say you, oh great Unsullied army? Speak up or forever hold your peace.

Personal Note: A man will be taking his annual adventures to the shores of Westeros this coming weekend as part of an annual agreement with Ozzette (and if momma ain’t happy, nobody’s happy).

Internet can be bad in and around the wannabe Dorne, so the Unsullied recap may be delayed or could even be authored by a substitute Unsullied. Should that be the case, be nice to them.

Oh, and if you have any recommendations on who I should see while doing my best impression of a drunk 20 year old, please let me know in the comments.