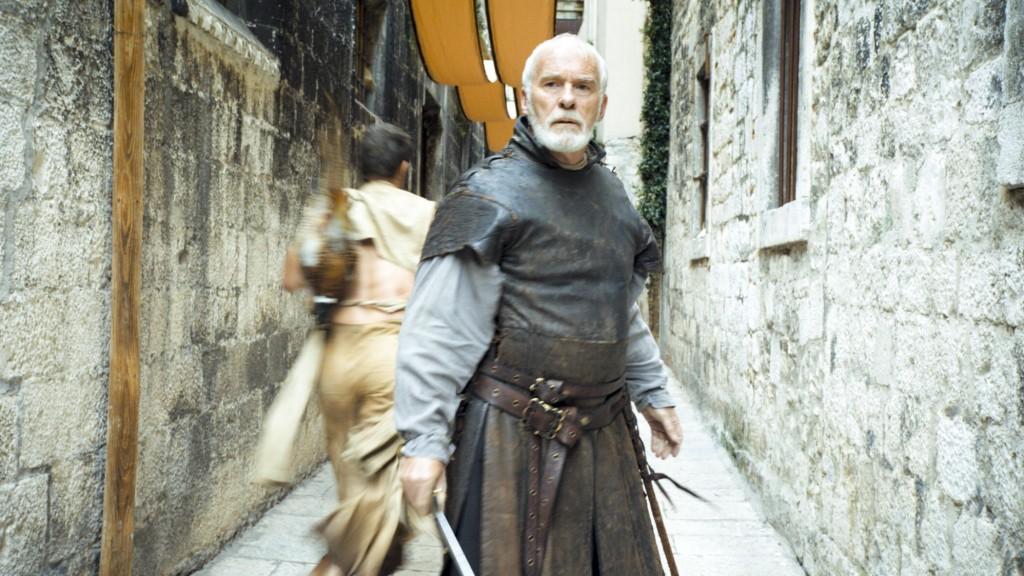 Greetings to the Unsullied (non-book) reader army and welcome home to the Wall. Time for our Monday morning quarterback session discussing and loosely analyzing the episode of night’s past.

Your chosen Unsullied leader at our frozen address goes by @OzofThrones, but if I may be honest, a man is really more interested in what you, the viewer took from Sons of the Harpy.

Unfortunately, I seem to have more questions than answers…

Welcome back for another edition of “non-book readers try to figure this shit out.”

Traveling by boat appears to be commonplace in Season 5. Jorah, Jaime, and Bronn continue to keep this trend alive in Episode 4, not to mention the implied upcoming travels of Meryn Trant and the socially awkward Mace to Braavos. We’ll get to that in a bit. 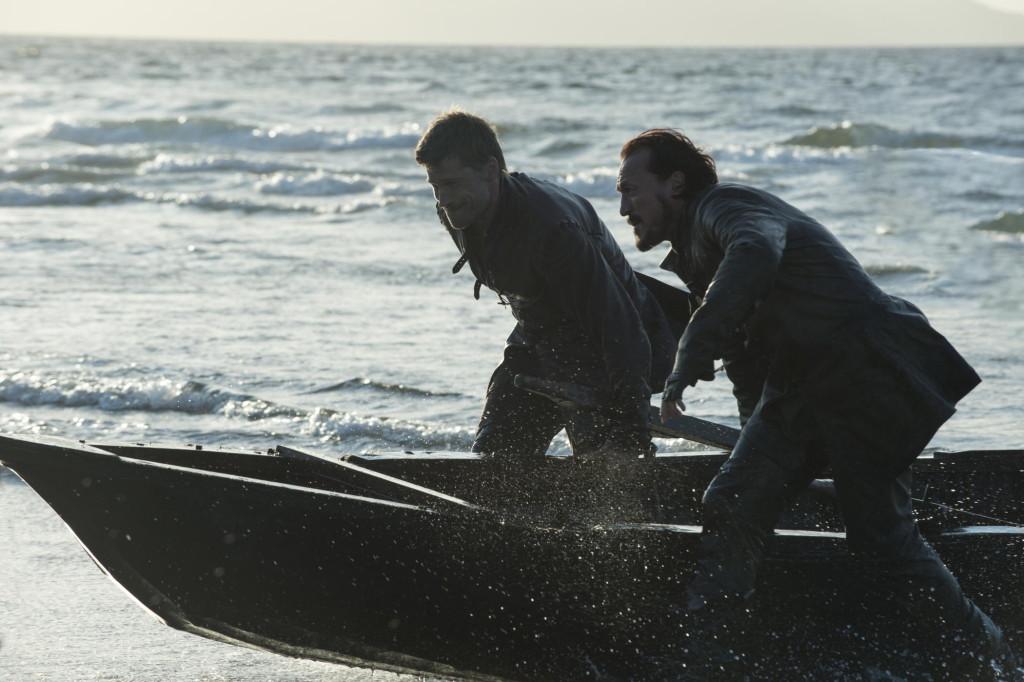 Bronn and Jaime head to Dorne on a merchant ship where the two have a candid conversation about the true intent of the mission and exactly what Jaime is trying to prove. Bronn may be Sellsword, but his bluntness and ability to perceive the situation rivals that of some of his more educated counterparts depicted in Westeros.

While Jaime’s internal struggles with him self are often difficult to watch, the duo arguably offer the most entertaining dialogue at present. That said, Bronn talking to a tree would likely be entertaining as well. Or in this case, talking to a hand. Jerome Flynn doesn’t receive due credit.

At yet another very small Small Council Meeting, the ongoing issue of debt is discussed and Mace is conveniently sent packing with Meryn Fucking Trant as an escort. Of course, Mace is delighted. But it is not until after Cersei’s meeting with the High Sparrow that we learn more of her motivation for sending Mace to Braavos. Or do we?

Cersei puts a plan into action arming the Faith Militant to supposedly help rid King’s Landing of the unjust, including a “certain sinner in our very midst.” As this is an army to protect the common people (the ones who Cersei previously cared nothing for), the writing on the wall suggests that this plan may horribly backfire in her face at some point. 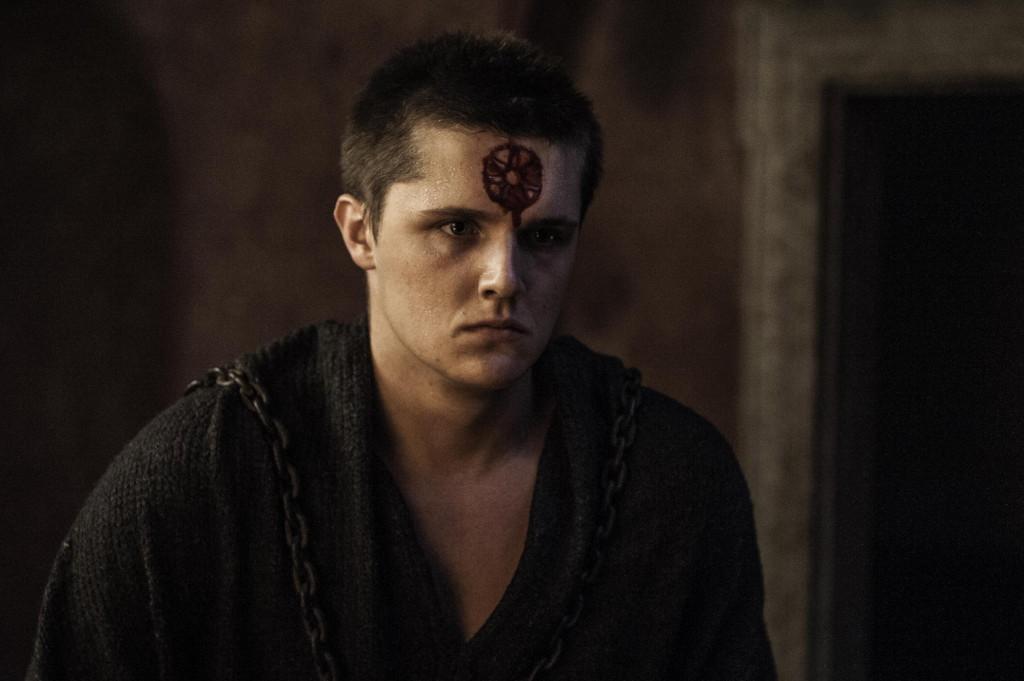 At the heart of all the backstabbing and closed-door plots being played, the core essentially amounts to a chess game between Cersei and Margaery; a game that Cersei seems to hold the upper hand in, at least for now.

The contradiction that apparently confused many show viewers last night is how this holy, seemingly peaceful man known only as the High Sparrow could condone such acts of violence depicted in the justice sequence.

Again, the prophecies of the witch from Episode 1 presumably come into play and help explain the actions of the Mother of Madness. And watching Tommen try to deal with the fallout is almost as uncomfortable as watching Selmy die in an Unsullied trap in Meereen. Oh, did he die? More in a moment…. 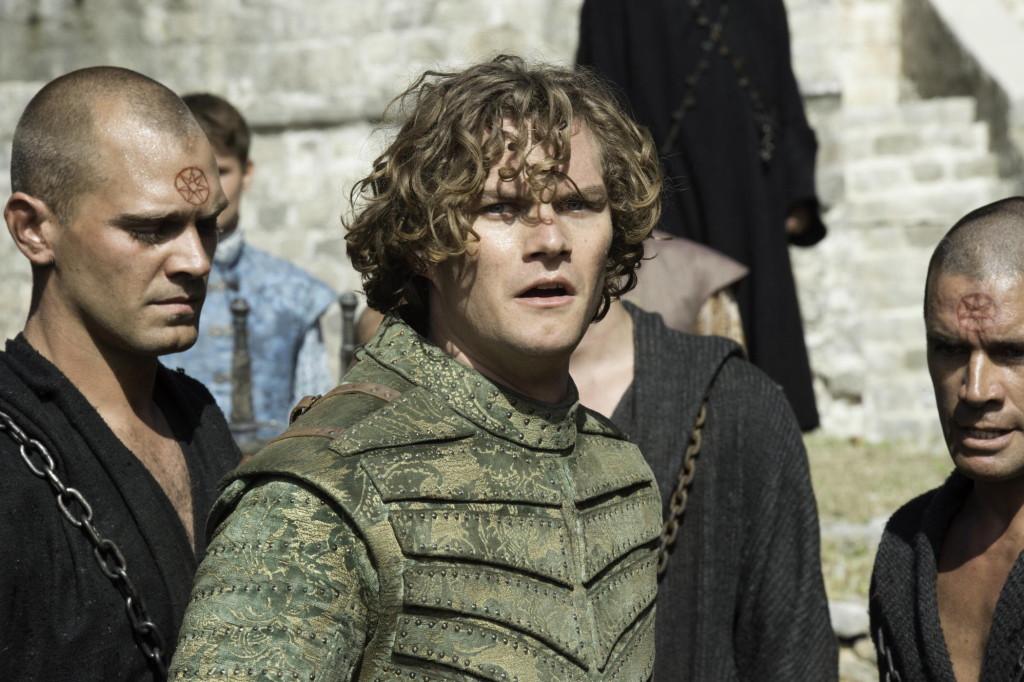 Loras is in the hole. Time to call Grandmomma.

The other note of interest here was a note from Baelish sitting on the table when Cersei fought the urge to drink wine in front of the Sparrow. The note says something about the establishment; the same words used by Olyvar during the raid on the brothel. Petyr may already be aware of the actions that Cersei intended to take. And if so, he will likely be plotting with his new friends on sparking the inevitable backfire.

Later in the crypts of Winterfell, Petyr tells Sansa that he is indeed riding for King’s Landing while somehow miraculously reassuring her that remaining there alone is the best thing for her. And Wardeness of the North has a nice ring to it.

But of all details that Petyr is aware of, the sadistic nature of Ramsay seems to have somehow bypassed him. Or has it? Betting on Stannis and putting Sansa at risk would put Petyr in a strong position in the North even if Stannis does pull off his quest for the throne.

My question is, will Sansa ever forgive him for leaving her there? Something horrid will happen after he leaves. It is known, even by those who know nothing. Just like Jon Snow…

Jon does apparently know self-restraint, even though he has a thing for reds. But Red Velvet has transformed more to a Black Velvet, and Jon upholds his vows for now including staying at Castle Black.

Meanwhile, if there weren’t enough Stannis supporters before 504, there most likely are now. The scene with Shireen was as unexpected as it was heart wrenching. And after coming across as a complete jackass in S2, this guy just keeps winning over the masses. 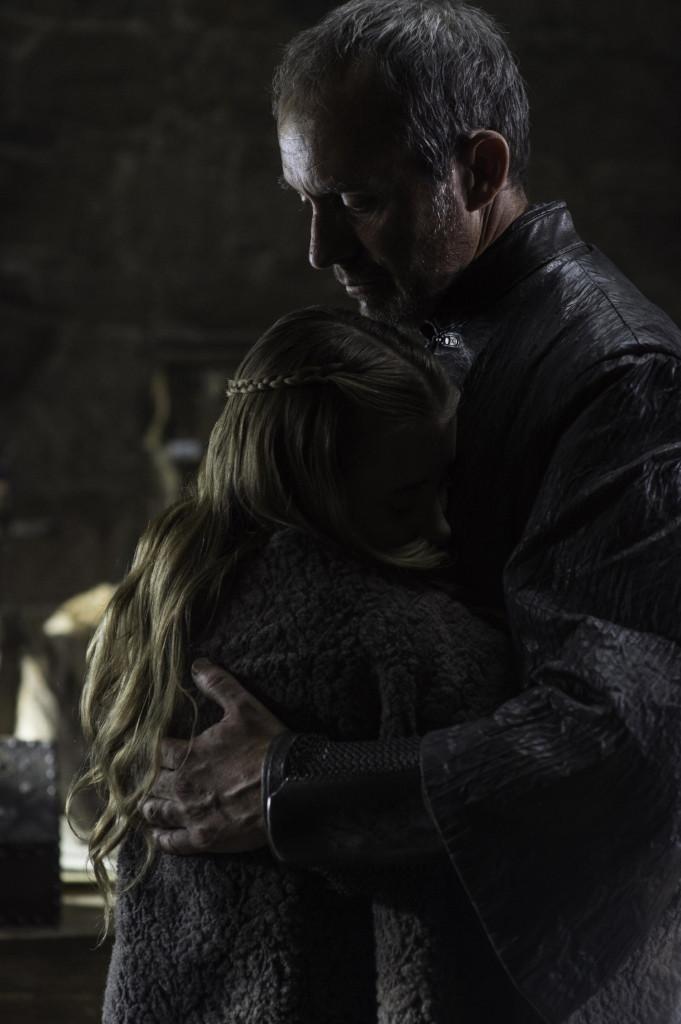 And again, more greyscale talk, the significance of which we are still somewhat left in the dark about.   Maesters? Dragons? The Lord of Light? Conflicting reports.

After much fanfare, we are finally introduced to the Sand Snakes… see “overall thoughts.”

Finally, Dany and Selmy share a story of song and share a pleasant moment that when depicted in Game of Thrones, usually means that something tragic is inevitable.

The Sons emerge, trapping a small group of Unsullied after working with the “White Rat” whore on more slayings. The Unsullied are obviously outnumbered, but even so, the viewer has been led to believe that these soldiers are an almost unstoppable force. The enemy here was a group of masked men and armed with knives with no armor.

This is likely food for thought by other commenters already. And we can argue the ins-and-outs of battle and hand-to-hand combat in a confined area until we are blue in the face.

What we can’t argue was that Ser Barristan was an honorable man; a man that fought his ass of until he was ultimately overcome by an abundance of Sons. 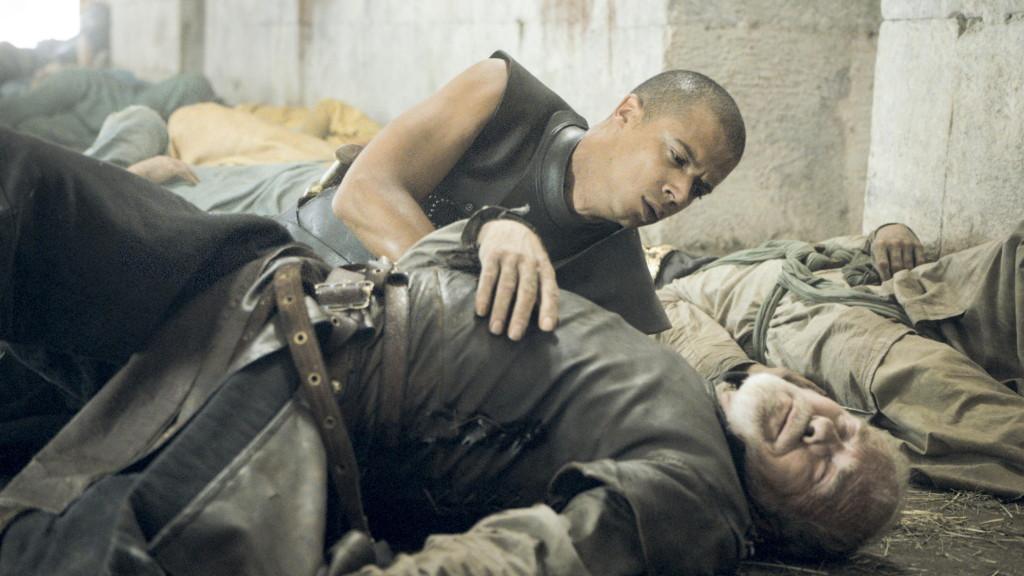 But initially, that was unclear to Ozzette and myself, at least until the preview for Episode 5 popped up. I sincerely hope I have spoiled nothing by writing it. It also leads one to believe that this scene’s intent was not fully reached.

Does it mean that the Unsullied are not as fierce as we once believed? Was this a poor execution of a scene (no pun intended)? While Meereen is a large city and the plan was to trap a small group of the Unsullied, where are the other 8,000? And what exactly was the point in killing off Selmy other than firing up Dany and most likely unchaining the dragons? Is this a portal for Jorah to reemerge as Dany’s advisor based on need?

As stated above… potentially more questions than answers.

Favorite Action Sequence: Two nominees this week, but I’ll go with Bronn and Jaime being saved by the hand. Pure gold. (Did it bend the sword?)

Favorite Quotes: “There’s nothing like a good fight to get you in the mood for fucking.” –The Wisdom of Bronn

“Your niece?” –The Wisdom of Bronn

“Let me show you what you’re fighting for.” –Red (Black) Velvet

“I can’t dig very well with one hand.” -Jaime

Ow, That Shit Hurts Award: Scorpions on a head. And then a spear to the head.

Overall Thoughts: My review is completely mixed. While the episode did encompass some intriguing plot points, the execution lacked on a number of levels. Were we supposed to be left wondering if Selmy is dead?

Furthermore, the Sand Snake intro fell completely flat. The acting came across as strained and the scene seemed to be inserted for the sake of merely getting that intro out of the way. Even with Jaime and Bronn arriving in Dorne, it felt out of place. Was the beach canopy completely necessary? 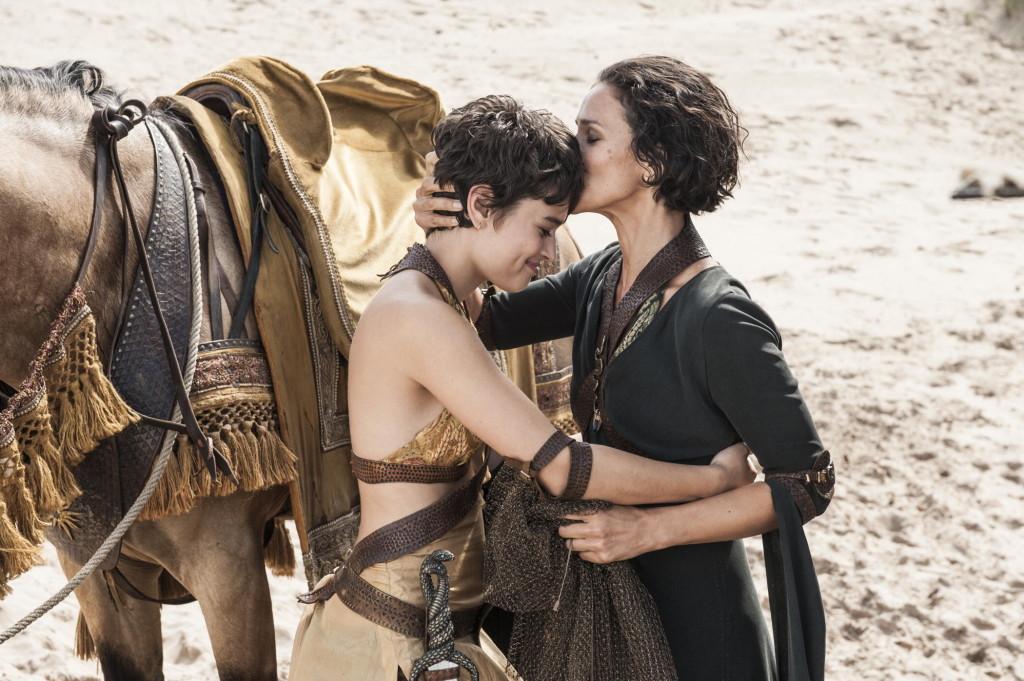 The jury is still out on the Snakes. Regardless, I’m a Rosabell fan.

To put it simply, this was not my favorite ep.

Speak up please. Is a man’s critique too harsh?

Next week, we all return to knowing fairly nothing, at least as it pertains to the show. Imagine that.