Title of Season 6, Episode 4 leaked? | Watchers on the Wall | A Game of Thrones Community for Breaking News, Casting, and Commentary 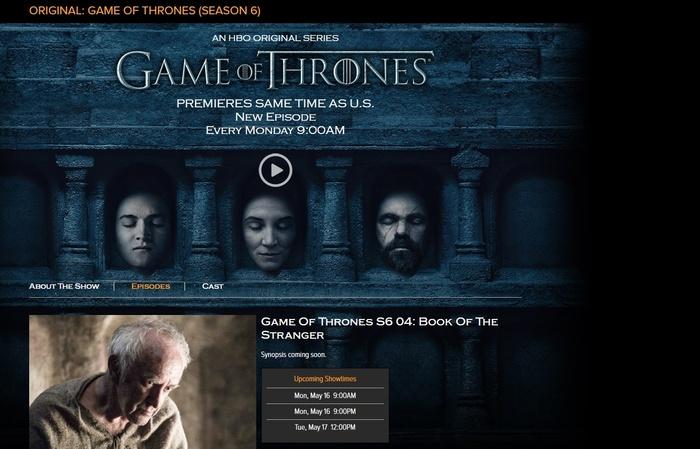 We know the titles of the first three episodes of Game of Thrones season 6, and now we might know the fourth.

According to the episodes page for HBOAsia‘s website, the title of episode four this season is “Book of the Stranger.” Though the title is unconfirmed by HBO USA at this time, it’s unlikely that HBOAsia would have added the title to their system without it being provided to them, and we’ve seen this title nowhere else.

The phrase is not a direct reference from the A Song of Ice and Fire novels. The Stranger is one facet of the Seven, the new gods of Westeros, but the Stranger is the least popular one as he represents death.

It’s possible the title is literal and simply referring to something religious, since the Faith of the Seven storyline is still in play this season, with Margaery and Loras’ current imprisonment and Cersei’s trial on the horizon. References to the Stranger of the Seven crop up throughout Westeros and beyond. The word ‘stranger’ without religious connotations is also common enough that the title could have double meanings, and refer to other people.

Thanks to WotW reader TheMannis for letting us know about the title!