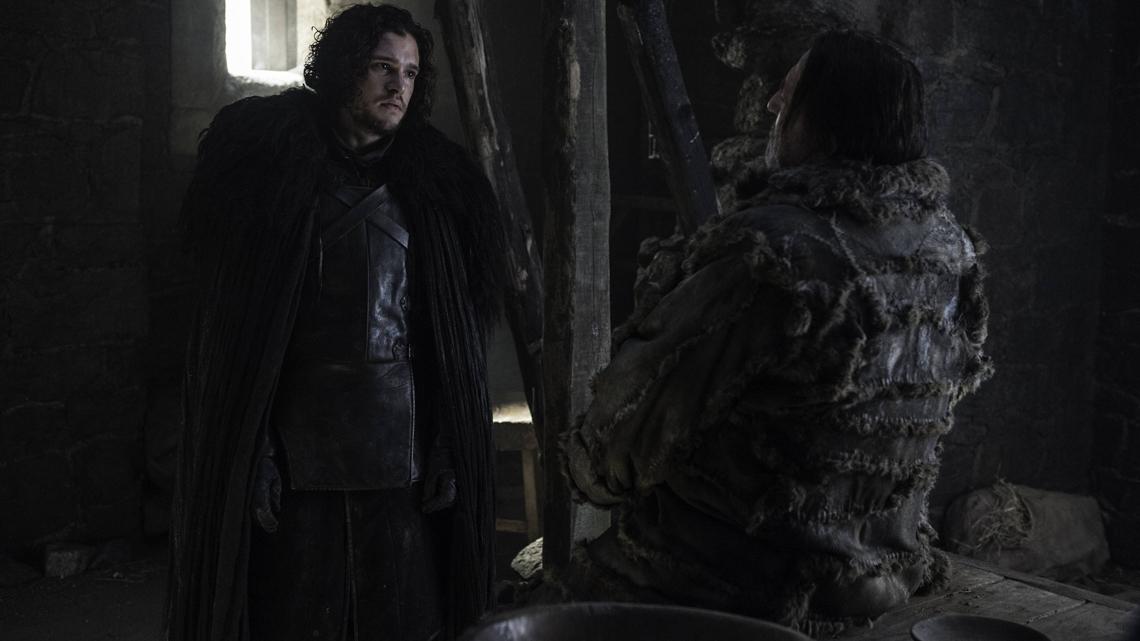 David Benioff, D.B. Weiss and Bryan Cogman take on big questions from Entertainment Weekly about where our favorite characters are headed in season 5, as part of the magazine’s ongoing coverage this month of Game of Thrones.

The showrunners comment on the coming-together of characters, the new lands, and the ongoing adaptation of the books.

Benioff says of Arya and Tyrion‘s journey, “Worlds are colliding. For so long, we’ve been in separate continents, and finally this season we’re starting to see some crossover. Tyrion and Arya—at end of season 4, we saw two major characters bound for Essos. That changes everything for us.”

Later he elaborates on Arya’s path: “Arya is going to Braavos to find her destiny there, which is fascinating for us. She’s been wandering the moors for years in the same costume, and this year she gets a new costume, new hairdo, new people to pal around with—or fight with, as the case may be. It’s an exciting season for Arya and Maisie loves it.”

Benioff also address the future of Jon Snow, noting that this is “a huge season for Jon.” The executive producer explains, “This season, he starts from a position of more authority than he’s ever had before, and all the responsibilities and pressures that come from that. He’s caught between two powerful kings, Stannis Baratheon [Stephen Dillane] and Mance Rayder [Ciarán Hinds], both of whom he admires in some ways but also finds frustrating because neither is willing to compromise.”

Daenerys‘s conflicts will center around her continued struggle to learn to rule, which is more complicated than merely being a conqueror. According to Benioff, “She’s struggling to maintain her sense of justice and to do the right thing, and learning that’s impossible when ruling a city as large as Meereen.”

In other areas of the show world, the writers were “so happy to be able to include” Dorne this year, says D.B. Weiss. He admits, “We didn’t know if it would fit, to be honest—because of budgeting, scheduling and story reasons. There were a lot of ways we had to cram it in. But it’s such an important place. Of all the places in Westeros you’d ever want to live, the Dornish seem to have figured out the right approach to life. It’s the one most aligned with what our approach to life would be if we weren’t making this show. It’s our Brazil—we dream of Dorne and the way they do things down there.”

Benioff addresses an often-sore subject for fans- the adaptation of the books and drifting from the source.

“If we were to remain entirely faithful to A Feast for Crows, half the characters—the most popular characters—would be absent from the screen this season,” he says. “It’s always been about adapting the series as a whole and following the map George laid out for us and hitting the major milestones, but not necessarily each of the stops along the way. It’s an adaptation, it will have to adapt in order to survive. There are always going to be some people who want everything to remain exactly as in the books. For us, it was never a choice.”

EW’s James Hibberd asks a good question: “With winter coming, does that mean that some areas of the show will be winter-free?” Bryan Cogman fields this one.

The jury is still out on how much winter appears everywhere. We’re only really seeing evidence of winter in Northern areas. What’s fun about it, though, is not only does it become a thematic part of the story, but it will become a practical part, as well. Weather will impact the story in cool ways.

Winter is coming…sooner or later.

Head on over to Entertainment Weekly to check out the full article for more on Cersei, the dragons, and George R.R. Martin’s decision to not write an episode this season.