The results are in! Here are your guesses for Game of Thrones season 6 episode titles | Watchers on the Wall | A Game of Thrones Community for Breaking News, Casting, and Commentary 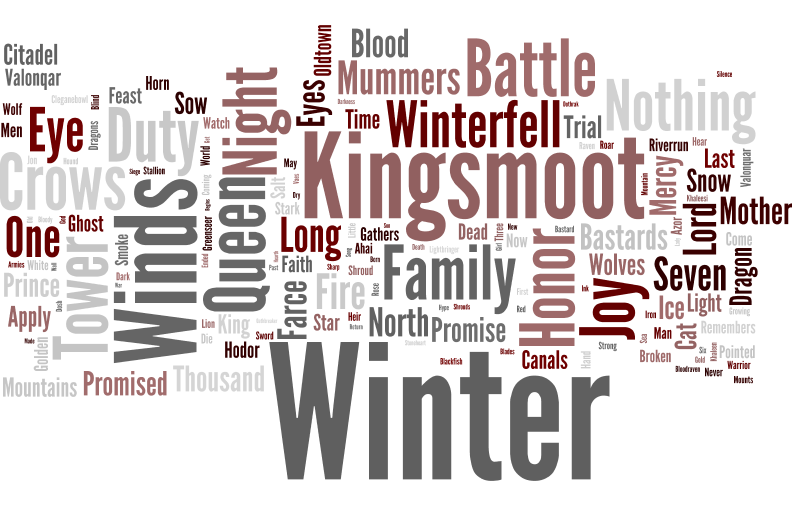 Editor’s Note: This guest post and survey was created by WotW reader James Rivers. After asking for fans’ input on potential episode titles for Game of Thrones season 6, over 1300 readers responded enthusiastically. The results are compiled a little differently this year, owing to the new path we’re forging, less guided by the books but we hope poring over the outcome and ideas of the fans is as much fun as ever. Thank you for reading! -Sue the Fury

The Oscars have an accounting firm to help tabulate and analyze their annual balloting. Us, not so much, but here we go.

We had well over three times the response to this year’s survey compared to the season 5 survey— each episode title had in the range of 800-950 submissions. On the one hand, this is exciting and reflects the growth of WatchersOnTheWall. On the other, it made it harder to tabulate, given wild variations on very similar names, typos and the like.

A more obvious challenge for survey respondents: We have “no idea what’s going to happen.” Sure, we have some spoilers, and we have a handful of major book events yet unseen on screen, but the season ahead remains a largely blank canvas. As a result, we have very repetitive top choices episode-to-episode. So we’re going to present the results differently than we did last year.

This post is meant to be largely safe for the Unsullied- though some episode titles are potential spoilers in themselves. For those who either haven’t read the books or haven’t read many of the filming leaks from this season, spoiler coding is used where appropriate below the fold. Click to uncover spoilers. Overall, proceed with caution!

Here are the episode names that got at least 100 overall guesses (only very similar guesses were combined).

In this Top 14 list, we have several references to events from the books (or sample chapters) not yet in the show, a forthcoming book title, family words, and even something directly from the Season 6 teaser involving Dany.

We’ve got references to Cersei’s presumed plotline; a book title; a maybe-if-there-winds-up-being-an-eighth-book title; a castle; a city; a major spoiler from Season 6 leaks; and even a fan-given name for a possible eventual event.

Apparently a number of fans think the show should reuse titles like “The North Remembers” and “What Is Dead May Never Die.” Can’t blame them, given speculated events coming up in Season 6. Various battle names here as well, all referring to the same possible event.

You’ll notice that among the 60 or so titles above, many overlap one another in terms of the character, plot or event they reference. I took the liberty of lumping popular related titles together into groups and used them for the next section.

This would appear to cover most major storylines, with the exception of events in Meereen.

And we start off with a tie between the opening words of the Night’s Watch oath and a quote from the tail end of Season 4 from the Three-Eyed Raven. Both seem appropriately foreboding. We’ve also a couple of quotes from preseason teasers, as well as a reference to Myrcella’s death. Oh, and a title from Season 2.

You’d think that Bran and company would be re-introduced in Episode 1 given their absence last season…perhaps in the very first scene. If so, this might be the episode with a title most likely to refer to them. Four such titles had at least 25 guesses, with the Three-Eyed Raven’s description of how he has watched Bran receiving by far the most. This choice also assumes that Jon’s likely resurrection doesn’t happen immediately.

Kingsmoot rises to No.2 here. You’ll be seeing a lot of it. A large amount of repetition, with about half of these title also popular for Episode 1. But overall the winner is a quote from a preseason teaser, available in two languages.

We’ll go ahead and concur by sticking the Dany-related titles here. Perhaps this episode also strongly features Margaery and Cersei. At the least, it establishes the predicament all three presumably find themselves in as the season opens.

This is the first of three episodes with “Kingsmoot” as the top choice. Yes, three. But its most votes came for Episode 3, so it gets the bolded treatment above. With “Crow’s Eye” and “We Do Not Sow” also getting votes, it’s a Greyjoy fest all up in here. Two of Arya’s alternate identities also make an appearance, as does “Mummer’s Dragon.” Book readers have a theory as to what character that represents, but it’s not someone we’ve seen on the show yet and there’s no sign of him coming in Season 6, though you never know.

From overall picks, with speculation: ]

The Sam-related title grouping actually placed 11th overall. It’s here only because the episode titles from three of the 11 above groups would, based on spoilers,

make the most sense for Episode 5 or 6. Speaking of Episodes 5 and 6, the Tarly family dinner is to occur during one of them, which means Sam and Gilly and her baby almost certainly swing through Oldtown en route (especially since we now know they travel by boat). Maybe Episode 3 is when they’ll land there.

There’s “Kingsmoot” at the top again. But it had more votes for Episode 3, so we’ll tag “The Mummer’s Farce,” which could also refer to something Braavosi in nature, as the Episode 4 pick. Pretty much everything else on this list is a retread.

“Prophecies from the books” group total: 303

We lack clear spoilers on when the “Is Jon dead?” mystery will be resolved, but it would likely need to be the same episode as

the Tower of Joy episode (Episode 5 or 6, per spoilers) or in an earlier one. And with Dany involved in some sort of tent-torching act in Episode 3 or 4, perhaps Jon will be revived the same episode? To me Episode 4 seems a little long for him to be on ice, but we’ll go with it.

“Kingsmoot” was already number one for Episode 3. “Tower of Joy” is No.1 for another episode. That bumps us down to “Crow’s Eye,” which I suppose could be used as a double entendre early in the season to refer to both the Three-Eyed Raven and a new season 6 character, even if said new character lacks the physical characteristic on the show that yielded that nickname in the books.

The huge number of Euron-related guesses guaranteed placement somewhere on the “informed speculation” list. Fans think, based on spoilers,

that the titular meeting occurs in a Jack Bender episode, hence No.5 or No.6, so here we are. “Crow’s Eye” seems less likely only because it’s unclear if Euron will be one-eyed on the show. “Silence” would be a neat title, though, albeit for whatever episode we first meet the pirate.

The Tower of Joy sequence has mythical import among A Song of Ice and Fire readers, and wouldn’t it make sense that whatever episode features it will also have it for its title?

The Tower of Joy sequence is in

Episode 5 or 6, we think. And so is the mummers’ play involving Westerosi characters (though the troupe also appears later in the season). Rather than tossing one of these up to Episode 3, where we know it won’t belong, I’m just listing both groups of titles here.

The Tully family words are by far the top choice here. It will be most interesting to see how the events on their (former?) home turf shake out.

From overall picks, with speculation

Well, the “informed speculation” guess here depends on whether you decide to combine “Seven-Pointed Star” with “Trial of Seven” and/or “Cleganebowl.” We’ll just go ahead and use “Valonqar” instead, although that’s only directly related if you interpret

The Hound to to be the little brother referred to in the prophecy. A safer pick might be something about the Seven.

Those fishy words make a return appearance at the top here, so we go with the second item on the list, the combined “Trial…” answers.

This could be the episode with the

siege of Riverrun — it appears to be happening in Episode 7 or 8, and since Jaime is still in Kings Landing in Episode 6, he’d need one fast jetpack to reach the Riverrlands, get settled in his tent and fight all in one episode. So we’ll use our Tully-themed title here. Have to wonder, though, if we’ll have parallel Lannister battles in the same episode. If Cersei’s trial is in this season, would it be in this episode as well?

Okay, these are all spoiler-y. Look away if you don’t want to know anything about the big episode 9!

Whew. That’s a lot of battles, Winterfells and bastards, with some ice and north thrown in. A wintry mix, if you will. In case you’re wondering (and I know you are), we had 192 guesses involving “Battle  ___________,” 140 with “________ Winterfell,” and 114 that incorporated the word “Bastard.” This includes guesses that fit more than one of those categories, though I don’t think anyone put “The Battle of the Winterfell Bastards.”

Well, these are largely nice and vague. Would it be cruel of D&D to title an episode “The Winds of Winter” before the book by that name is released? Or just cruelly appropriate. Well, we’ll see.

Anyway, there’s no real speculation here, other than by the end of the season we should at least have a White Raven sighting.

Finally, here are some amusing, or possibly confusing, entries:

A few more with spoilers:

And that’s all for this year! It won’t be too much longer before we learn how accurate we were with our guesses.