The Problem of Two Brans | Watchers on the Wall | A Game of Thrones Community for Breaking News, Casting, and Commentary 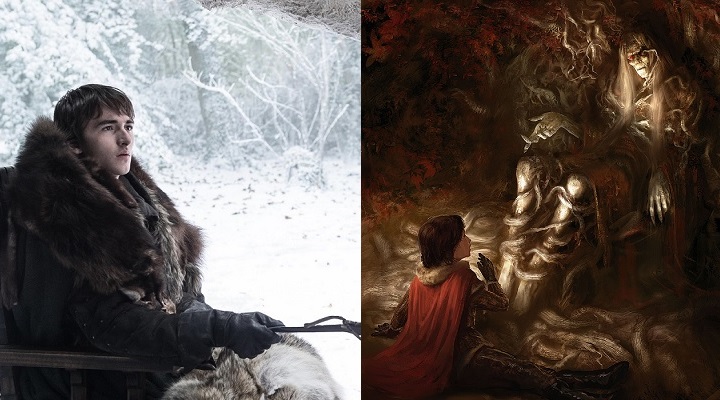 This post contains spoilers from the Song of Ice and Fire series.

There’s something wrong with Bran Stark. No, not that he can’t display facial emotions or that he receives hugs like a dead fish. Or even that he calls himself the Three-Eyed Raven, describing Bran as his former self. What’s wrong with Bran is that Game of Thrones has greatly expanded his seer abilities, and that is severely limiting the story the writers can tell with him.

Bran has incredible gifts as a greenseer and a skinchanger (sometimes called “warg” on Game of Thrones). Not only can he skinchange humans (remember Hodor’s eyes turning white?), a taboo of the highest order in their culture, but he has supplanted the Three-Eyed Raven as the primary seer of the Children of the Forest. This gives him unlimited access to the sum total of their knowledge going back tens of thousands of years. Already that makes him a character of untold importance and power. This season and the last, however, the Game of Thrones writers have taken those abilities and wildly expanded them to the point that it has become a problem they must write around, instead a story asset.

In the books, George R.R. Martin writes Bran as having visions through the weirwood trees – visions that stretch back an untold numbers of years.

A man must know how to look before he can hope to see,” said Lord Brynden. “Those were shadows of days past that you saw, Bran. You were looking through the eyes of the heart tree in your godswood. Time is different for a tree than for a man. Sun and soil and water, these are the things a weirwood understands, not days and years and centuries. For men, time is a river. We are trapped in its flow, hurtling from past to present, always in the same direction. The lives of trees are different. They root and grow and die in one place, and that river does not move them. The oak is the acorn, the acorn is the oak. And the weirwood … a thousand human years are a moment to a weirwood, and through such gates you and I may gaze into the past.

He heard a whisper on the wind, a rustling amongst the leaves. You cannot speak to him, try as you might. I know. I have my own ghosts, Bran. A brother that I loved, a brother that I hated, a woman I desired. Through the trees, I see them still, but no word of mine has ever reached them. The past remains the past. We can learn from it, but we cannot change it. –A Dance With Dragons, Bran III

In this scene, Bran and the Three-Eyed Raven see all the way into the deserts and hills of Dorne without the aid of a weirwood tree. They watch the battle between Eddard Stark’s company and the two Kingsguard members Arthur Dayne and Lord Commander Gerold Hightower as well as the follow-up scene between Ned and the dying Lyanna Stark. You could explain that perhaps these memories are being taken from one of the dead, maybe Ned himself, that has been sucked by the trees like so many others in the Weirwood collective.

However, in this past episode, Bran shattered that understanding with his slam on Littlefinger. Bran repeats back to Littlefinger that “Chaos is a ladder”.

This shocks Littlefinger silent, hearing his words come back at him. What these two scenes establish is that show-Bran’s ability is not bound by time or location. The original line is spoken in season 3, episode 6 “The Climb”. At this time in the story, Bran has not developed his powers and is still with Jojen, Osha, and Meera Reed.

He was able to see backwards in time to somewhere he shouldn’t have access to by the known rules Martin has laid out for him, all the way into the King’s Landing throne room years before. And this is where Bran’s exponential growth as the Three-Eyed Raven becomes a problem: Game of Thrones’ writers have established that Bran can and does see everything, everywhere.

Whether it’s Arya at the Crossroads, Littlefinger in the King’s Landing throne room, Ned at the Tower of Joy, all the information he could ever want is at his disposal. He knows who Jon Snow’s parents are, what songs Rhaegar Targaryen played to Lyanna on his harp, how Aegon the Conqueror spent his time, everything. And with the example of Wylis becoming Hodor by Bran’s mind time traveling:

And with Ned hearing him at the Tower of Joy, Bran can affect the past as well. This means that Bran could, feasibly, change or affect anything in history or in the present with a whisper.

That ability is so outrageously powerful that the writers have been forced to give him what I call the “Dorian problem”. Dorian is a character from the Night Angel series, who like Bran, has total access to the future but no control over it and it drives him insane to use it. This creates convenient moments where a character who should see the whole plot can’t. And, similarly, Bran has been given that weakness that he has little-to-no control over what he can see, based on what he has said so far. He describes it as clips and flashes, like he is an enormous, unsorted database of knowledge.

The dramatic tension in his story becomes, rather disappointingly, when does Bran finally piece it all together and master the skill? It’s more of a countdown than an opportunity for the character to continue to grow and interact. Book-Bran, as we know him, has much more limited omniscience in that, while he does have more information than anybody, it’s limited by the weirwood network. And also, as Bloodraven says to him:

“Once you have mastered your gifts, you may look where you will and see what the trees have seen, be it yesterday or last year or a thousand ages past. Men live their lives trapped in an eternal present, between the mists of memory and the sea of shadow that is all we know of the days to come. Certain moths live their whole lives in a day, yet to them that little span of time must seem as long as years and decades do to us. An oak may live three hundred years, a redwood tree three thousand. A weirwood will live forever if left undisturbed. To them seasons pass in the flutter of a moth’s wing, and past, present, and future are one. Nor will your sight be limited to your godswood. The singers carved eyes into their heart trees to awaken them, and those are the first eyes a new greenseer learns to use … but in time you will see well beyond the trees themselves.” – ADWD, Bran III

He will be able to leave the trees and see things live anywhere, but not going backwards in time unaided by the weirwoods and trees, according to Bloodraven. * There are interesting and exploitable gaps in those limitations. As a storyteller, you could hide important information in those gaps, make Bran solve for the missing information and also interact with other characters, notably Arya and Sansa, for what he is missing. As Show-Bran stands, the people around him are irrelevant except as pieces to move on a cyvasse board.

A convenient method for the writers to pursue would be to give Bran access to every piece of exposition you could ever want. In doing so, we can see how this has uniquely isolated him within the narrative. There’s almost no reason for him to be back in Winterfell and with his family other than safety. He could, like the Three-Eyed Raven, be off in a cave or almost anywhere else. 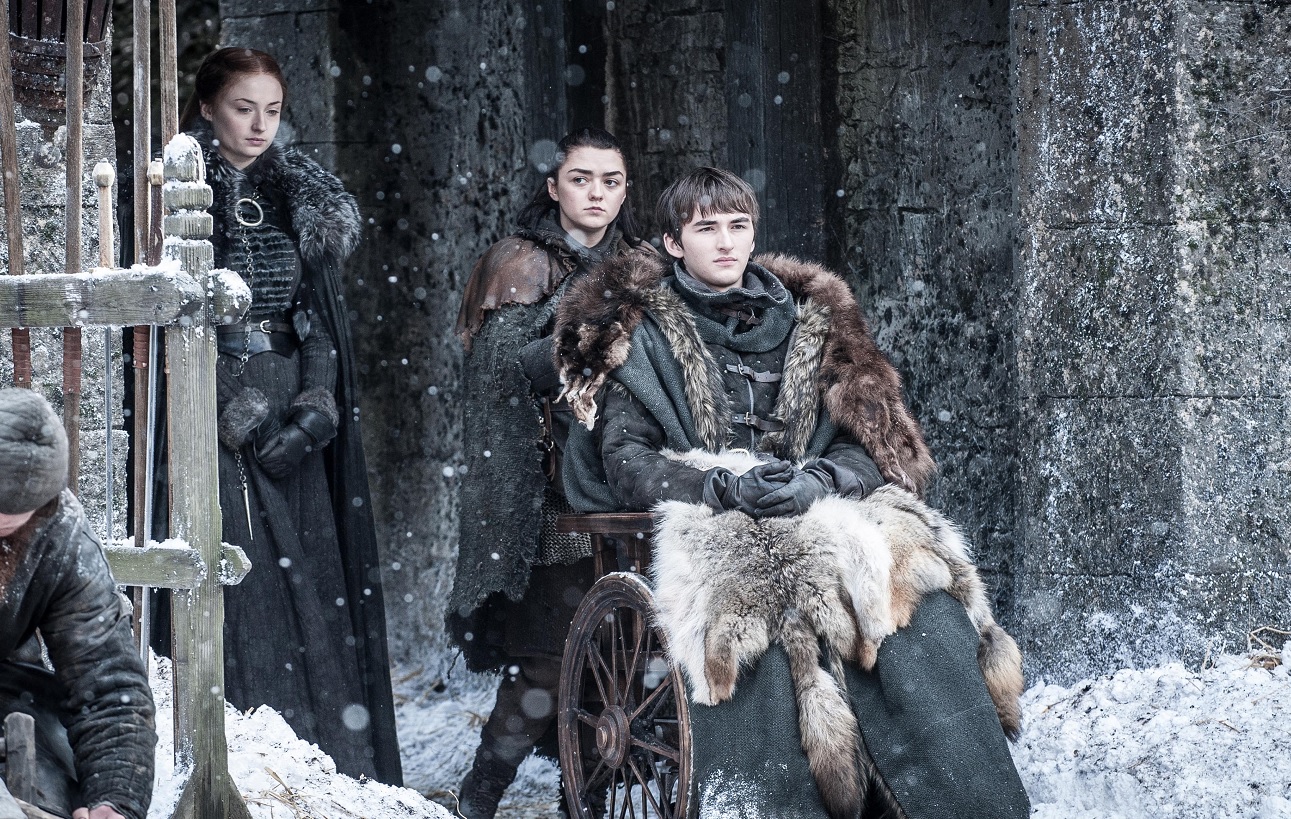 In terms of the current plotlines, this is notably affecting Littlefinger the most. By saying “Chaos is a ladder” to Littlefinger, Bran is communicating that he has seen anything and everything Littlefinger has ever done. He could know about Lysa, Brandon, Ned, Catelyn, Ser Dontos, Joffrey. Every horrible, selfish thing he has ever done. But, as established earlier, it’s possible he doesn’t because of the “Dorian problem” the show writers has introduced. So instead of a fascinating Cat (heh) and mouse, as Bran and Littlefinger circle each other, trying to find and hide information from each other, the only question is does Bran already know everything? Or has the show decided there is a convenient gap in Bran’s sight. It sets up an unbalanced dynamic that Bran will win at some point. Either he already has the information and is playing dumb or he will just recall the most damning information and his only real problem is convincing Sansa and Arya of it.

As viewers, we are losing a fascinating plot and character growth arc that book-Bran promises to have, with the known and logical gaps in his abilities that will force him to rely upon the rest of his family and companions as valuable resources. Imagine if Bran couldn’t just impress people with his knowledge and be robotic because he doesn’t really need them except as pieces on a cyvasse table; rather he’s an overwhelmed child who is struggling and finds strength, comfort, and insights from those around him. This not only loses out on aspects of his character, but those in Winterfell and across the story as well. Bran, once he masters his gift in the show, takes away importance and agency from other characters who are just playing in his game.

The Bran we should have is one who still struggles, needs other people, doesn’t know everything, and has an active but not overpowering role in the war against the dead- not the dispassionate exposition database and puppeteer we have.

JoeMagician is a moderator for the /r/asoiaf community, co-host of the podcast Maester Monthly, and lover of tinfoil. You can find him spinning new tinfoil on his blog The Clanking Dragon, on twitter @joemagician42 and at @maestermonthly with his fellow mods, and on reddit at /u/joemagician