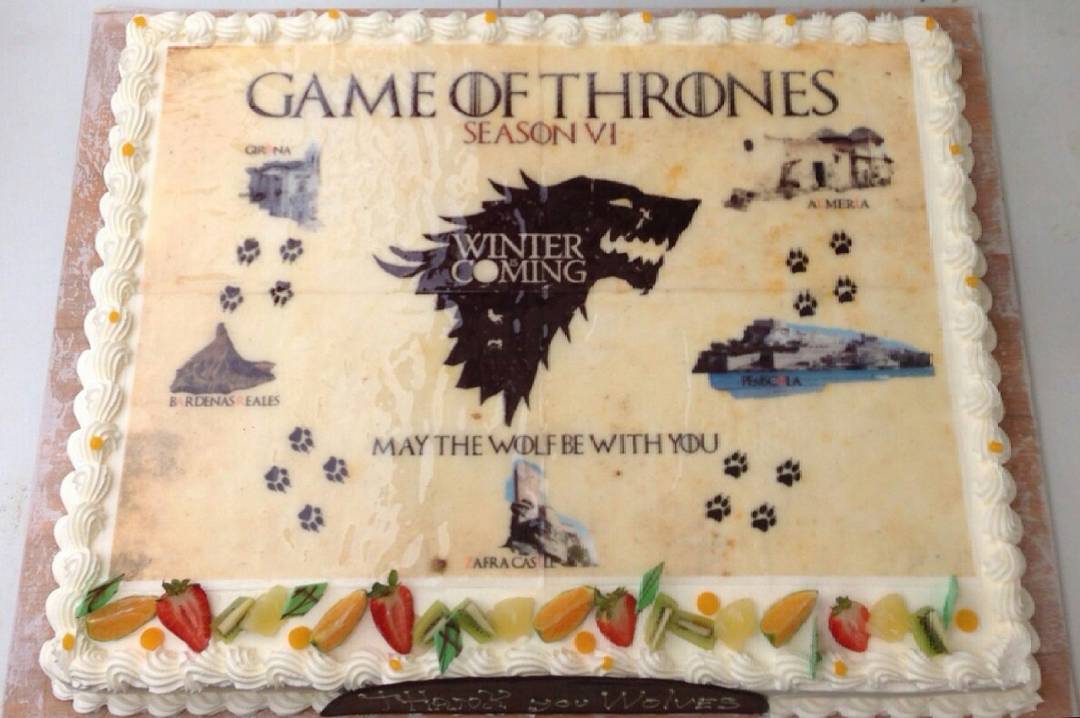 It’s a wrap- for one country, anyway! Game of Thrones is celebrating finishing up the location shooting of season 6 in Spain. The cake shows the five major sites the show visited over the last two months in the country- Girona, Bardenas Reales, Zafra Castle, Peñíscola, and Almería where GoT filmed this week, ending with a photoshoot at the Alcazaba.

The stars celebrated together before heading out of Spain:

Keisha Castle-Hughes and Jessica Henwick both shared this photo:

Not long after, Castle-Hughes shared a photo of the Almería Airport- presumably she’s going home.

Emilia Clarke shows off a gift from her bosses- a going-away-present, with filming done?

Altogether, it’s been an exciting couple months of filming in Spain, with many new locations, a set visit from the US Ambassador to Spain, James Costos, and countless photos offering hints and spoilers of season 6. The cast and crew have apparently loved their time in the country, and the beautiful locations will add a great deal to the show, so thank you to Spain for being a gracious host to Game of Thrones!

Filming in Spain may be done but cameras roll on in the show’s home base of Northern Ireland. Eugene Simon posted this yesterday, confirming he’ll be doing more GoT filming this year:

In other Game of Thrones sibling sightings, Alfie Allen and Gemma Whelan were hanging out together yesterday. Based on his subsequent post, I’m guessing he’s in England, so they were probably just visiting, not filming together. But either way, it’s cute- Greyjoy Family Cupcake Hour.