Test for Eko: Adewale Akinnuoye-Agbaje talks Thrones Casting | Watchers on the Wall | A Game of Thrones Community for Breaking News, Casting, and Commentary 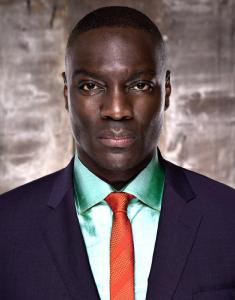 Freshly-cast Adewale Akinnuoye-Agbaje spoke to Vulture about the (not quite) auditioning process that landed him the role of Malko for the upcoming fifth season of Game of Thrones.

Thrones loyalist Marcelo Córdova alerted me to the Vulture interview on Twitter. Here is the interview in its entirety.

A few interesting tidbits after the break:

Akinnuoye-Agbaje says that he didn’t even have to audition; they already knew they wanted him:

“The producers had seen some of the work I’ve done before and invited me to be a part of it. It was that simple,” Akinnuoye-Agbaje told Vulture at the premiere of his latest film Annie on Sunday. “There wasn’t an audition process. It was just, Would you like to do this? And Yes! Thank you very much!“

When I heard he was cast I did a mental backflip. He was far and away one of the best things to come out of LOST. He can do slow-burning fury as easily as eloquent gravitas, and I can’t wait to see him chew through some Thrones scenery. 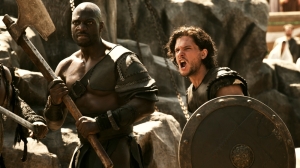 (In my view, Akinnuoye-Agbaje was also one of the best things to come out of the Kit Harington sand-and-sandals disaster epic Pompeii. Kit, yoked to the nines, certainly held his own, and in 3D it was certainly nice eye-candy… but the script–and Kiefer Sutherland’s vague somethingsomewhere accent–needed some serious work.)

Akinnuoye-Agbaje added this little nugget in the interview:

“The character that I play, it’s actually advantageous to me not to actually know too much. That’s all I’m going to say,”

Curious. Perhaps someone who is not what they appear to be? My first thought is a Faceless Man… but I’m probably waaaay off.

So who the hell is Malko? He’s not a canon character, and Akinnuoye-Agbaje hasn’t even been seen filming with anyone yet, as far as I know.

The name certainly has a Essosesque ring to it, which would put him in Jorah’s storyline, Dany’s storyline… hell, even in Varys, or Tyrion, or Arya’s storylines for all we know.

(If he’s accompanying an Iron Banker, he could literally be anywhere.)

I want to say he’s like… Brown Ben Plumm’s fitter replacement, or reprising a gladiatorial flex-your-biceps-in-the-sand kinda thing… but I keep going back to thinking of him as a Faceless Man. And I’ve got nothing to support it. Quick, someone talk me out of it!