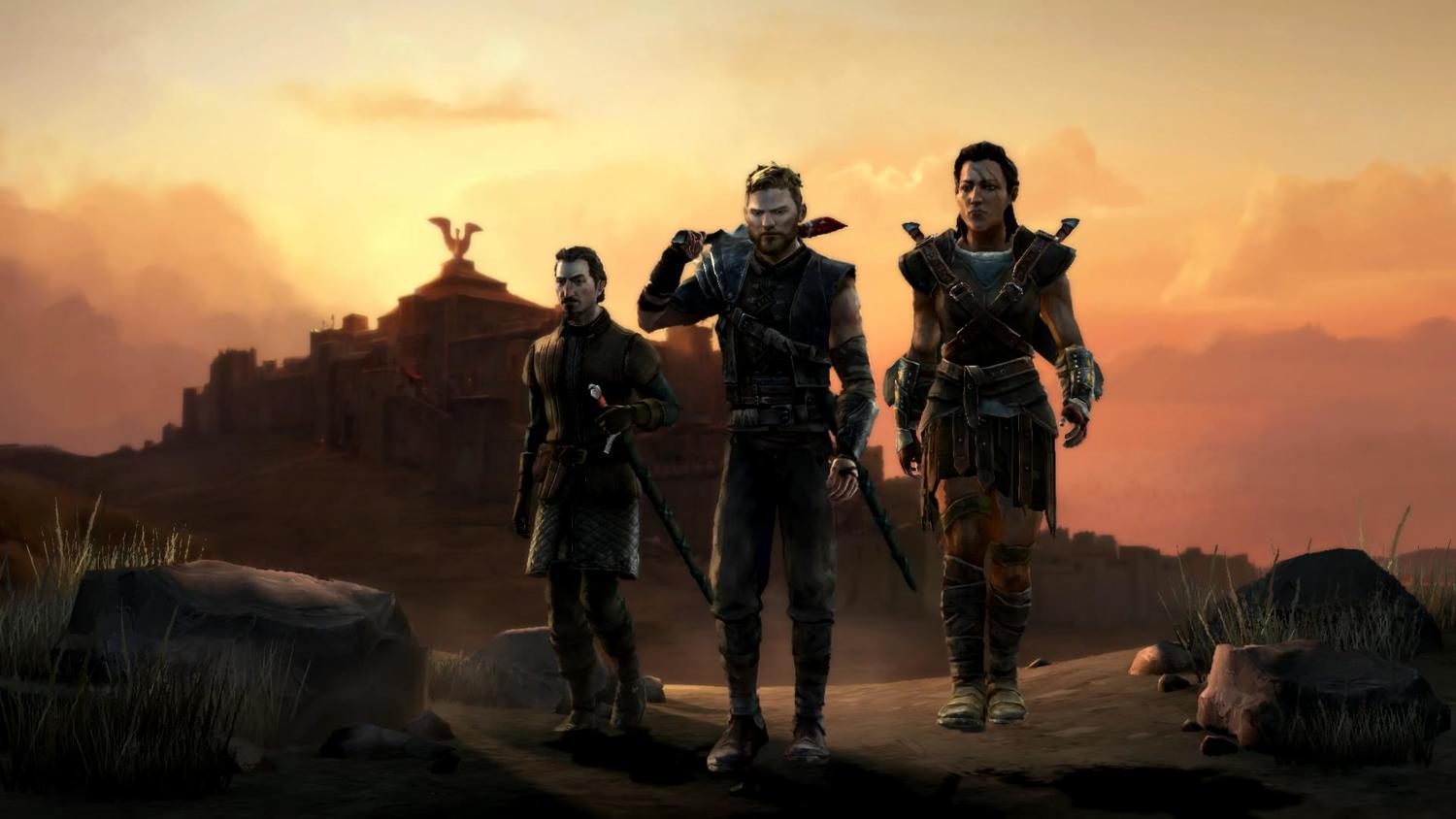 I played the premiere episode of Telltale’s venture into Game of Thrones on the PS3 when it released back in December. Since then I have procured a PS4, and before playing through the new episode, I made sure to revisit “Iron from Ice” on the newer console. It proved a much more pleasant experience performance-wise, and provided the added benefit of freshening all plot points in my mind before heading into “The Lost Lords”.

First up, some general thoughts on Telltale. I suppose I would call myself a fan of their games, having played through both seasons of The Walking Dead, Back to the Future, The Wolf Among Us, and the premiere episode of Tales from the Borderlands. While not as vehemently opposed as many to Telltale’s decisions/directions of late, I do firmly echo the growing consensus that the studio’s games are drifting more and more towards visual novel fare rather than the interactive (imagine that) point-and-click adventures of the past.

We were all waiting to meet Asher after the premiere. While not as volatile as I expected after Lady Forrester’s appraisal of him in “Iron from Ice”, he was successfully introduced as the necessary wildcard best suited to thwart the Whitehills’ scheming. On the introduction scene as a whole, however, my opinion sways. While bombastic, exciting, and brilliantly reminiscent of the great fight scenes in The Wolf Among Us, it felt slightly off. As much as I loved it (and it was so, so thrilling), all I could think of while playing was the opening of Uncharted 3. You could substitute Nate and Sully into the Yunkish brawl and the scene would play out the exact same way, right down to the witty banter and over-the-top takedowns. Don’t get me wrong, the scene was good… it just didn’t feel like it belonged in the world of Thrones. In addition, the dialogue was noticeably clunky, and initially teased a sour taste for what was to come. Luckily, the rest of the episode didn’t follow suit. 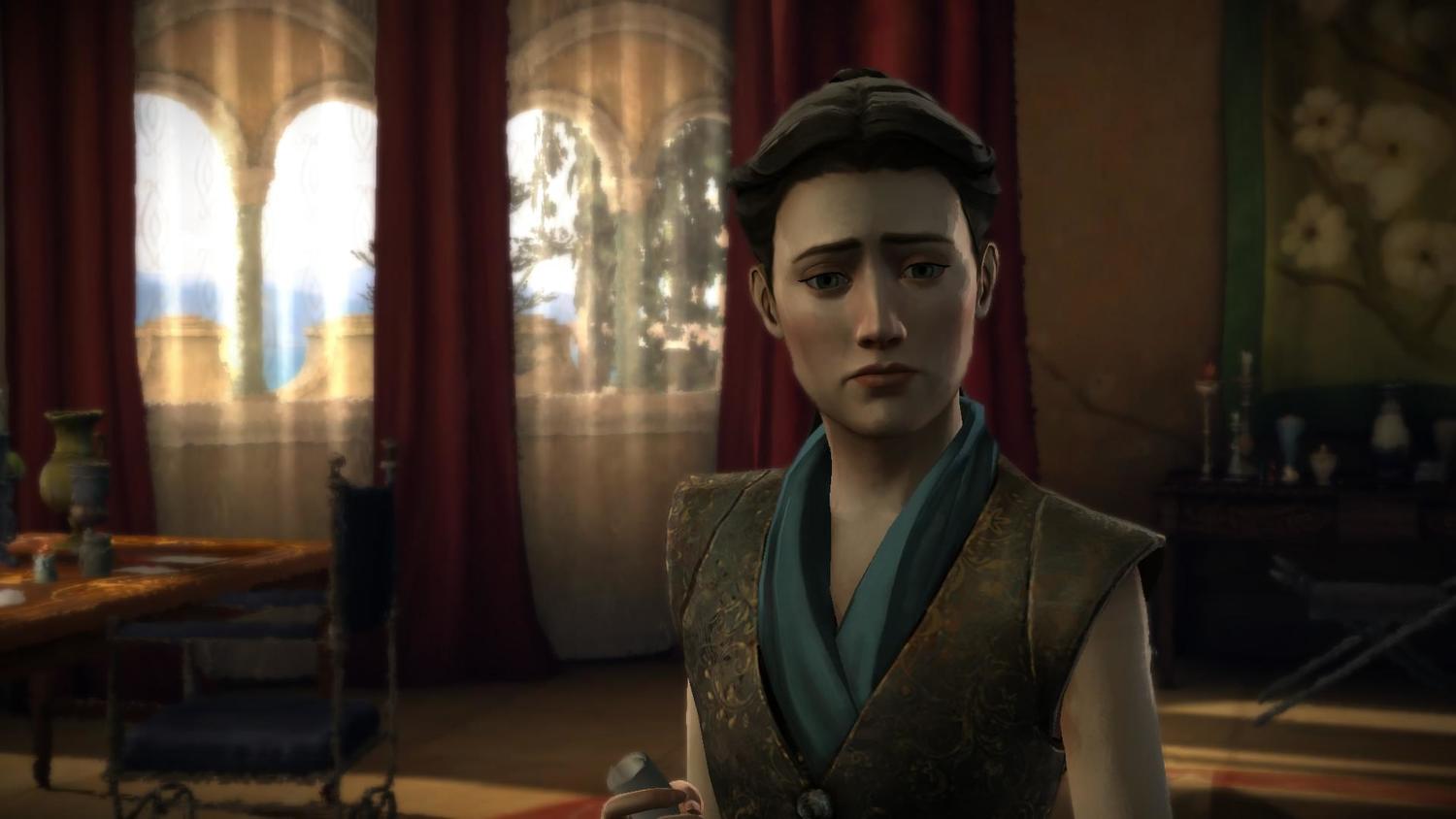 Mira is one of the more interesting characters to me (or perhaps it’s just her situation in King’s Landing), and the cast she plays off is strong. I appreciated the writers’ restraint in keeping Cersei out of this episode – she really wasn’t needed. I wish I could say the same for Tyrion, however. His inclusion in this episode was baffling, to say the least. Also, I’m not a fan of whatever the writers are trying to do with him… it’s as if they’re trying to convey Tyrion’s shrewdness by just confusing the player about what in seven hells he’s even talking about.

If nothing else, Mira’s sections provide nice character moments for Margaery, during which we see the shields come down and her more tender, vulnerable nature assert itself.

Back home at Ironrath, Rodrik lives! This was a pleasant surprise, and I really appreciated the fleshing out of a man who had seemed like a throwaway plot device in the premiere episode. Thematically, a lot of the material here was rehashed from Ethan’s brief reign as lord – Ramsay’s a prick, Whitehill’s a prick, our Ironwood is great etc. It is excusable though, out of the necessity to put some meat on Rodrik’s resurrected bones. Oh, and I won the wedding proposition, yay!

Gared’s sections at the Wall were my favourites overall, but I am admittedly a stickler for anything Wall-related anyway. Funnily enough, Jon reacted with far more emotion in his to and fro with Gared over the Red Wedding than he did in his Season 4 scene with Sam. Still, I liked Kit Harington’s work here. It was understated but firm. 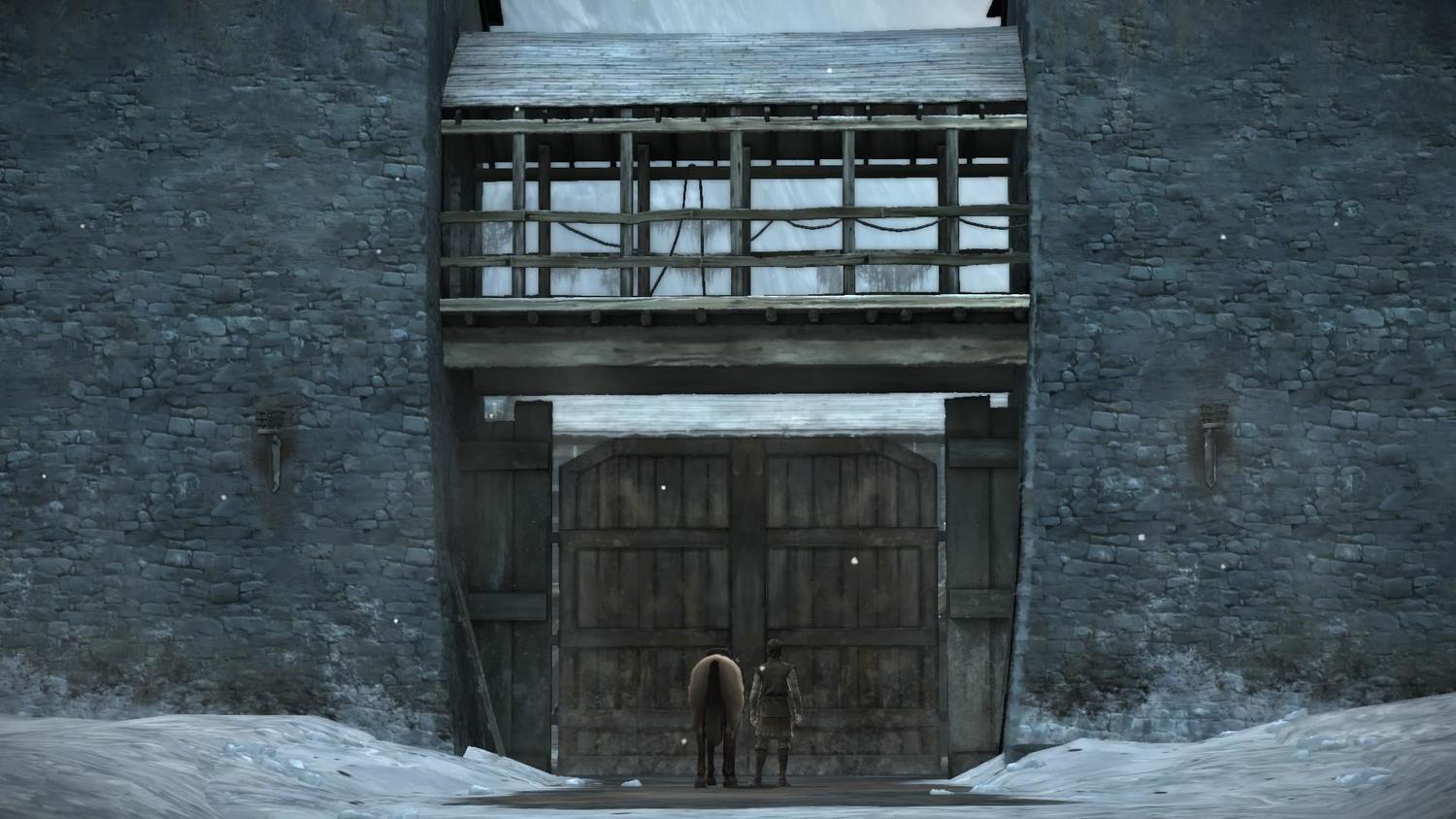 This episode also heralded the introduction of new Wall character Frostfinger, who I have a few thoughts on. I’m a fan of his character design – weathered, brittle, with a steely streak and a great voice. Surprisingly, he was a lot more nuanced than your run-of-the-mill drill sergeant character. But that’s where I take issue. We already have an atypical drill sergeant in Alliser Thorne. It was so blaringly obvious that Telltale for one reason or another couldn’t include Thorne, so they made up a Thorne replacement and dumped him into the same role. Also, I was under the impression that my Gared was getting on relatively well with Frostfinger, only for the following dialogue option to appear when talking to Jon: [“He seems to have it out for me.”]. Oh, you want me to not like him, I guess? I must be making the wrong choices in your allegedly choice-based game.

As a coda to my Wall musings, I’d like to raise a Telltale-ism that reared its ugly head and disgusted me. I tried to stay neutral during the confrontation between Cotter and Finn. I had previously mentioned to Cotter that he should return the knife, but I also didn’t rat him out when Finn began his tirade. I initially refused to be antagonistic towards Finn, and chose [Don’t move] as a means of neutrally preventing a fight from breaking out. I guess Telltale knows my own brain better than I do, because before I knew it I was forced to repeatedly punch Cotter in the face, and was informed at the end of the episode that I stood up for Cotter against Finn. Ok.

While quite solid as a singular chapter, this episode did feel like another pseudo-beginning, in that from now on, the wheels will grind harder and the plot will gain much more forward momentum. The ending only added to that sentiment.

And the ending was perfect. 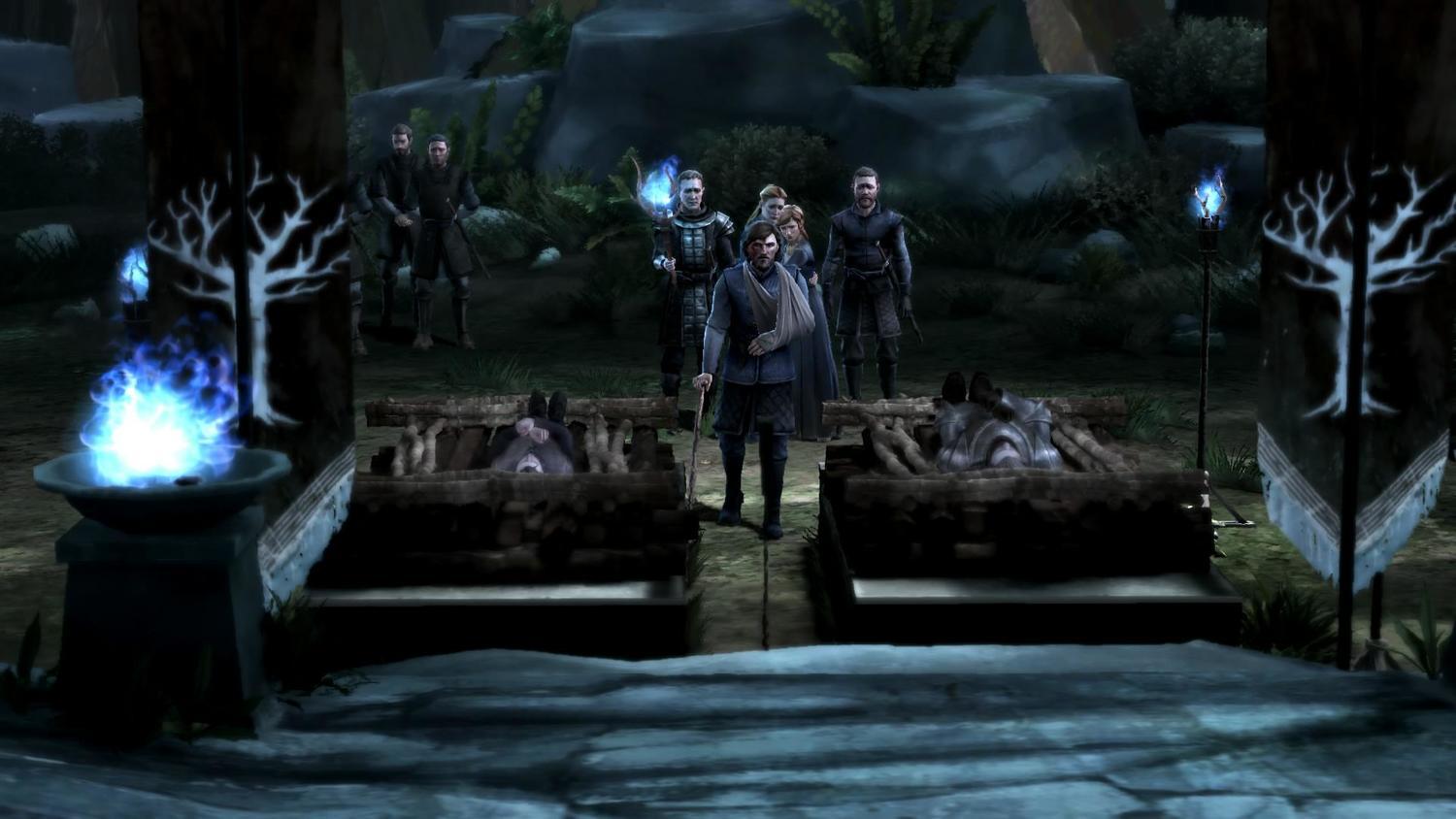 The nitpicker in me wants to complain about the style and cadence of the song being anachronistic, but I’ll let it slide for how beautiful it was. Talia’s song (the lyrics of which vary slightly depending on some of your choices throughout both episodes) provides a sombre albeit rousing finale to “The Lost Lords”. With the funeral as a backdrop – we actually see a Northern funeral for once as the private family affair it is – and the underlying oaths of renewed vengeance, it’s almost a musical mirror to The Rains of Castamere.

In case I’ve given the wrong impression and despite my negativity, I loved the episode! I don’t believe in giving ratings, but take it from me that amidst some typical Telltale shakiness, “The Lost Lords” further cements this game as an experience that any Thrones fan should enjoy.

If you haven’t already (and if that’s the case, what did you read this for?!), check out Shylah’s review of Episode 1: Iron from Ice.